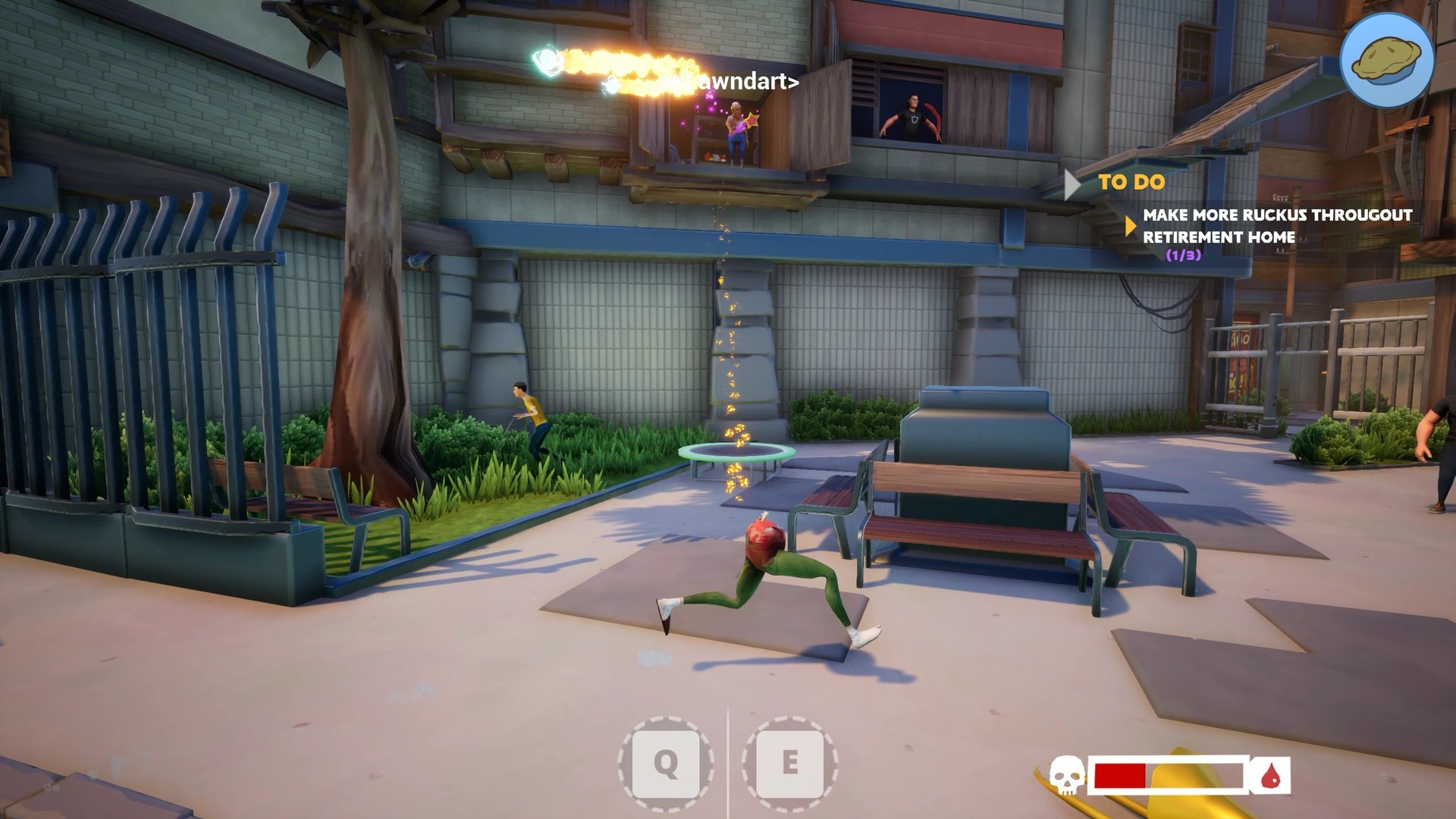 We should always respect the elderly. In the case of Just Die Already, that rule goes out of the window. Instead, you get to make an old man jump into garbage trucks, electrocute himself, dive into oncoming traffic, and eat until he explodes. And that's just the tip of the iceberg.

You get to control a feisty old man who's basically a human crash test dummy in this hilarious upcoming game from developer DoubleMoose and Curve Digital. And if you're wondering if we really need another wacky sandbox game, you have no idea how hard I laughed at this one.

According to the Steam description, the retired person you're playing as lives in a future where people aren't having children. Apparently "ungrateful millennials who prefer playing video games instead of actual work" are the culprits for this bleak vision of society, so you just don't have anyone to pay for your living costs. That means you're relegated to collecting retirement tickets to be taken care of in your old age, all the while ragdolling around to perform dangerous stunts.

They aren't joking about the dangerous part, not by a long shot. From the moment I stepped (er, rolled?) out of bed, chaos ensued. Somehow I had already pulled the leg off of the old man I was controlling, and I hadn't even fully started the game yet. I started over several times to get a few random events for footage on Shacknews, and eventually I rolled out of bed without managing to maim the guy.

But that's the name of the game. Basically, you can roll this guy around like he has no bones, and that's because you basically break the brittle ones he has at the drop of a hat. If you've ever played Goat Simulator or DEEEER Simulator, this game has a very similar set of physics, with a little Octodad thrown in for good measure.

You can roll around getting into mischief all on your own in this small chunk of the game, or you can complete guided missions to earn rewards. For instance, one requires you to slip and fall, which I promptly did in a puddle of milk before chopping up a poor old dude walking around in the store I was in. As a reward, you'll get stuff you can purchase from vending machines or those special retirement tickets.

There are a wide variety of items you can unlock, from katanas to clown noses to axes that you can just harass people with and chop in half. The same thing can happen to you too, though. You can be abused to the point where you're a chunk of flesh rolling around on the ground, somehow sentient and able to taunt people even when you have a leg or an arm remaining. You can always respawn when you die or get too beaten up to move around effectively, but it's so much funnier to just flop around.

Unfortunately, there were plenty of items and locations not in the Just Die Already demo just yet that I missed out on since a large part of the world was cordoned off. There will be multiplayer mayhem to engage in as well when the full game debuts. Right now, it looks like the game is aiming for a summer 2020 release date, but there doesn't appear to be a concrete day and time for it to make its debut just yet.

I'll definitely be keeping a close eye on Just Die Already, because I'm ready to see how out there the game can really get.