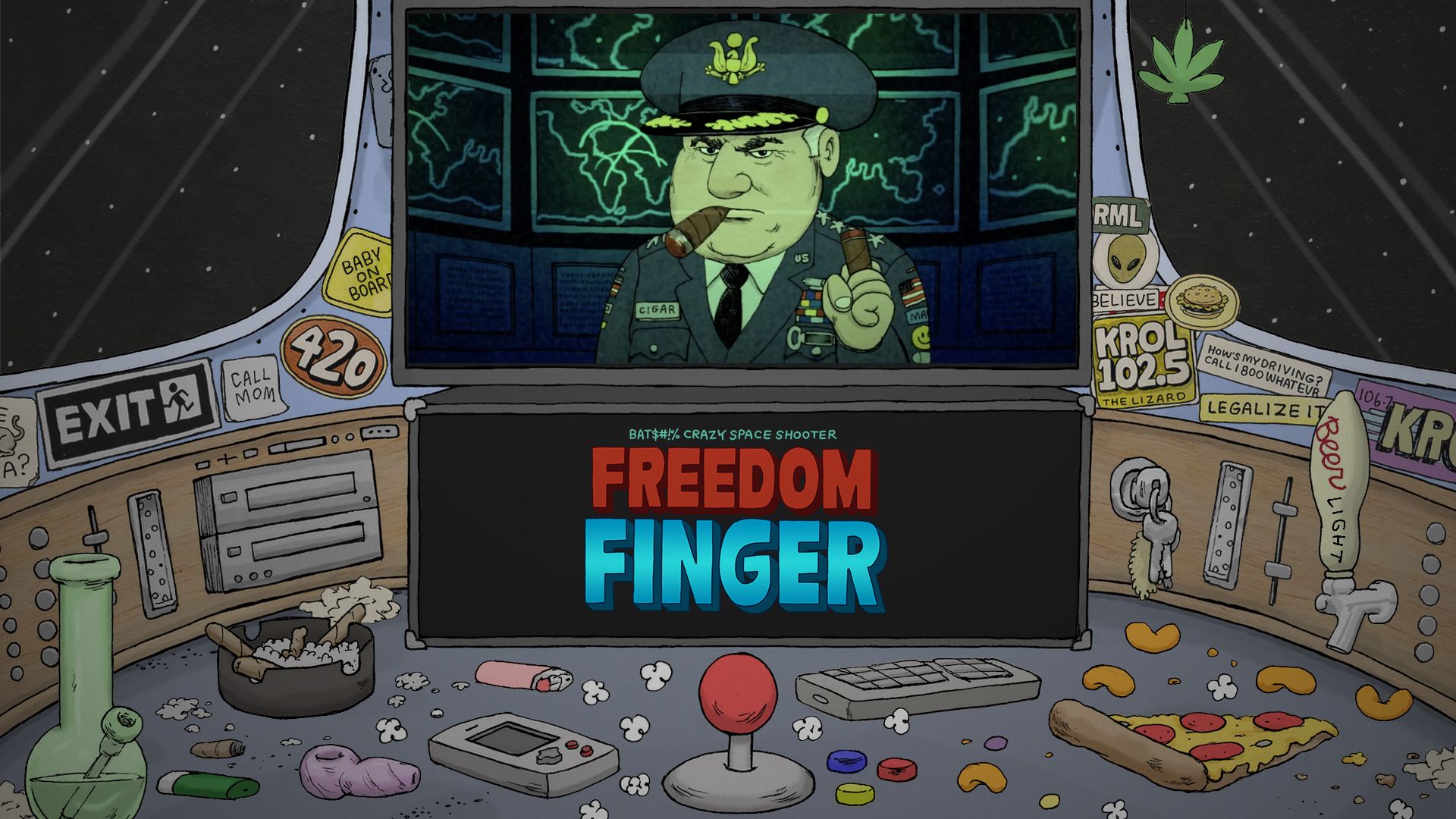 Freedom Finger is a side-scrolling shoot’em up from Wide Right Interactive. Set in space, players assume the role of Gamma Ray, a rookie space pilot on a mission to save their colleagues from terrorists. Under the command of Major Cigar - who is played excellently by Nolan North, Gamma Ray will have to master a number of battle tactics in order to finish the mission in one piece.

Within the first few minutes, Freedom Finger completely sets the tone for the rest of the game. Major Cigar is yapping away at you, shouting expletives as you prepare for takeoff in a spaceship shaped like a middle finger. The tone and atmosphere reminded me of a cartoon that would have aired on Adult Swim some years ago. This over-the-top sense of humor and self-awareness help to give Freedom Finger its identity, although it sometimes feels like the game is trying too hard. Often, the dialogue falls back on 69 and 420 jokes rather than using the humor to make commentary, or enrich the characters.

Gamma Rays spaceship, the Eagle Claw, is the driving mechanic behind the gameplay. This giant iron middle finger side-scrolls through the galaxy blasting enemies and asteroids. There are three key components to combat: shoot, punch, and grab. Shooting is your standard mode of attack, useful for damaging enemies from a distance. Punch slams foes with a closed fist, and is most effective at destroying asteroids and mounted weapons. Lastly, the grab function lets players grab certain objects and spacecrafts and use them against the enemy.

These three abilities work well to create a balance and diversify the action. Levels can get hectic pretty early on in Freedom Finger. While my first instinct was to just sit back and fire away at enemies before they could get close, this simply wasn’t cutting it after a handful of levels. The game forces you to mix things up and implement all three aspects of combat in order to succeed. I did however find a few instances of difficulty spikes though, particularly in the bigger battles. There were a few cases where the challenege from one level to the next felt like a substantial leap. I also noticied this with a couple of the games bosses, whom were quite unforgiving.

As with the nature of the genre, Freedom Finger has a solid sense of replayability. Upon completing a level, players receive a mission statistics report. This report lists the percentage of asses kicked, along with the number of enemies punched, grabbed, and thrown, along with a score total. This provides incentive to go back and try to top your score and climb the leaderboards.

Music is deeply rooted in the identity of Freedom Finger. Each level is set to a tune either licensed or originally designed for the game. The music is epic and intense. In many cases, it feels like the levels were designed to match the music, as the on-screen action often coincides with the beats and instruments.

The campaign in Freedom Finger consists of 40 levels over the course of 13 different worlds. Each world has its own look, along with a different crop of enemies to battle. For the experienced shoot’em up player, there are several settings to change the difficulty and raise the challenge.

Freedom Finger was previously released on Nintendo Switch and PC. With the game now coming to PlayStation 4 and Xbox One, Wide Right Interactive has added a crop of new content and fixes with the Rhymesayers update. One of the new additions is an arcade mode with every level already unlocked. Arcade mode now has all levels unlocked, making it easier to hop around from level to level replaying and attempting to hit higher scores.

Give them the finger

Freedom Finger is an enjoyable take on the classic shoot’em up thanks to its simple yet challenging gameplay. The mechanics are easy to pick up and understand, but a bit harder to master and use effectively. At times it tries to do too much, but the hyper-escalated sense of humor and self-awareness add a unique layer to gameplay. Wide Right Interactive’s Freedom Finger is a worthy installment in one of the industry’s oldest genres.

This review is based on a digital download code provided by the publisher. Freedom Finger is available now for Xbox One, PS4, Nintendo Switch, and PC for $14.99.