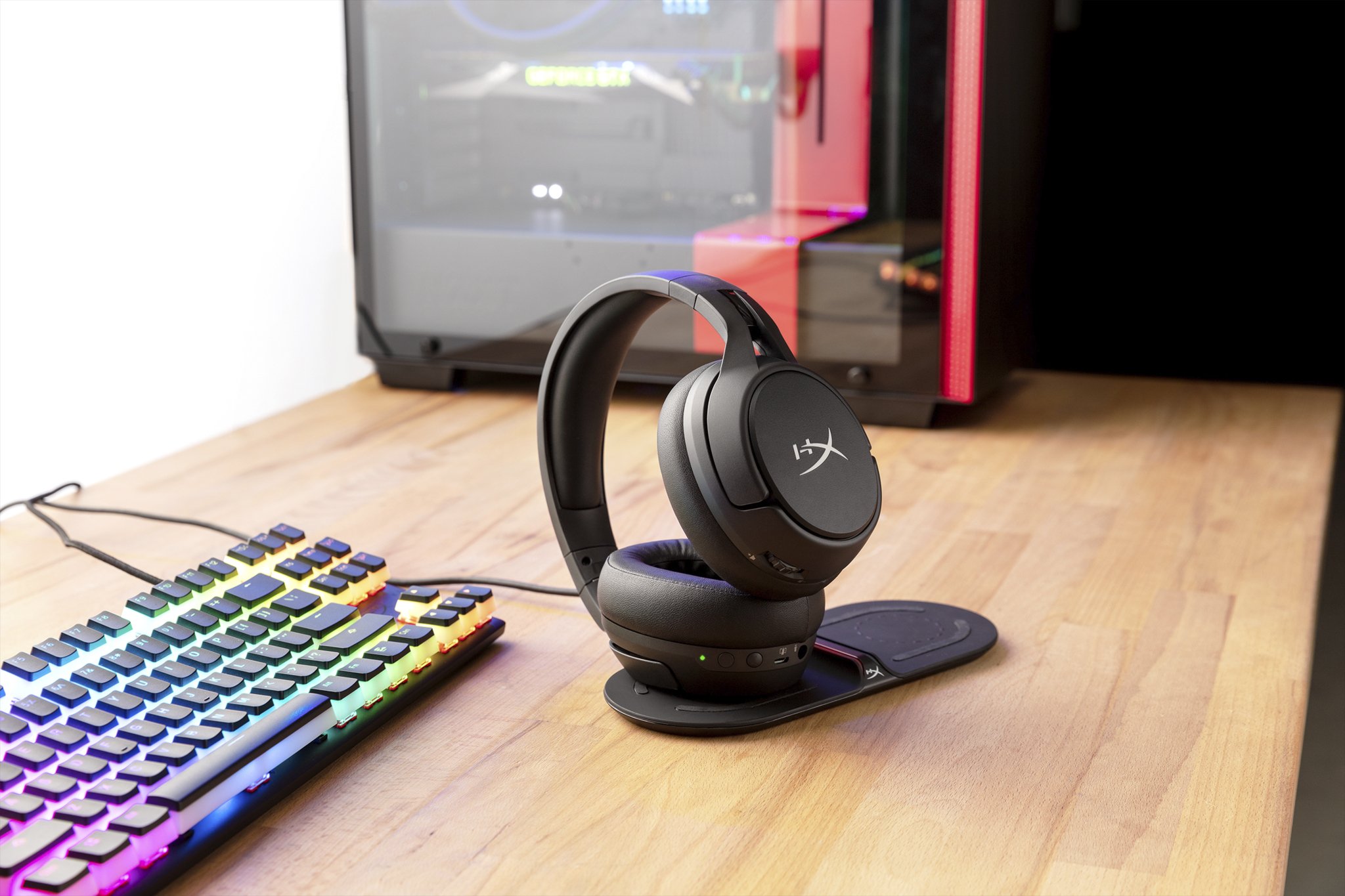 HyperX has emerged as one of the top names in the world of gaming peripherals over the last handful of years. A subsidiary of Kingston Technology, their gear looks to enhance the experience for players on PC and console alike. The Cloud Flight S is the newest in HyperX’s line of wireless gaming headsets. Now enabled with Qi-charging, the Cloud Flight S is the epitome of wireless freedom, despite one hurdle.

Compatible with PC and PS4, the Cloud Flight S is set up with the simple insertion of a usb stick. From there, the headset will connect with a quick hold of the power button, so long that it has a sufficient charge. When testing the strength of the wireless signal, I was impressed with how far away I could be from my setup without completely disconnecting. I was able to walk from my second floor bedroom, all the way to the basement before the signal began to give out. It was convenient being able to make quick runs across the hall and down the steps without having to constantly remove and put my headset back on.

This sense of freedom is precisely what makes the Cloud Flight S so fun to use. I never realized how bogged down I felt wearing a gaming headset with wires and remotes. No longer do I have to worry about my chair rolling over the cord, or my dog pulling the wire and knocking my headset completely off of my head. It’s hard to see myself turning back to a wired headset anytime soon.

Another great aspect of HyperX’s latest headset is it’s sense of comfort. Gaming sessions can run long, so you never want to be using gear that is uncomfortable or awkwardly designed. The earcups on the Cloud Flight S are soft, never irritating or rubbing against my ears like other devices have in the past. As its name implies, the Cloud Flight S is considerably light. This makes the headset easier to wear, and factors into the overall feeling of freedom.

Getting back to the earcups, this headset allows you to rotate them by 90 degrees. I live in a busy house. Often, I find myself playing with one earcup on and one off, so that I’m still readily available and present in case something outside of the game requires my attention. The flexibility of the earcups makes this easier than ever, and the headset still stays on securely without sliding or needing readjustment.

Getting with the program

As with many personal gaming accessories, the Cloud Flight S has a strong emphasis on customization. HyperX allows players to customize the buttons on the side of the earcup to their liking. I used this to tailor the controls to a layout that best fit my gaming habits.

You’re also allowed to choose whether you want to utilize the detachable mic that comes with the headset, or a different device. This is where my one glaring issue with the Cloud Flight S comes in to play. The microphone quality isn’t very good. Without telling my friends, I switched out from my old headset into the Cloud Flight S and joined our Discord call. Immediately, they all noticed the difference. One even asked if my regular mic had broken and I had reverted to an older one. Upon hearing the playback of my own voice, I noticed a weird, muffled sound to my audio. I tried to mend this by playing with the microphone settings, but to no avail. I ended up removing the mic and using my old desk microphone instead.

One of the new features that separate the Cloud Flight S from its predecessor is its 7.1 surround sound system.The sound quality is top of the line, and it can be greatly attributed to the implementation of this new sound system. The 7.1 surround sound works to better immerse you into a game. There are even presets that help optimize the sound to some of gaming’s most popular titles. When playing Fortnite with friends, I was able to hear and accurately call out nearby chests and enemy footsteps better than ever.

When listening to music, the quality of the 7.1 surround system is really highlighted. A button on the left side of the headset allowed me to quickly activate and deactivate this feature. While listening to my Spotify playlist I would toggle it on and off, to see if I noticed a difference. Standard sound is still solid, but turning on the 7.1 surround sound system made me feel like I was standing in the studio with Travis Scott and Drake as they recorded SICKO MODE.

The next large upgrade is the Cloud Flight S’ compatibility with wireless Qi-charging. The headset comes with a wire that owners can use to charge the headset. However, if you own HyperX’s ChargePlay Base, you can charge your headset by placing the left earcup onto the base. This feature is convenient and requires no setup, other than having a plugged in and powered ChargePlay Base. The battery life on the Cloud Flight S is already at an impressive 30 hours per full charge, and it was easy to just place the device onto its charger after logging off for the night.

Up in the clouds

The Cloud Flight S is an excellent headset for gaming and listening to music. The integration of a 7.1 surround sound system ups the ante in terms of immersion and awareness, while the Qi-charging feature adds an easy and efficient way to charge. The experience is hindered by a microphone that simply falls short in terms of audio quality. Other than that, The Cloud Flight S is still among the finest offering from HyperX.

This review is based on hardware provided by the vendor. The HyperX Cloud Flight S is available now on their website for $159.99