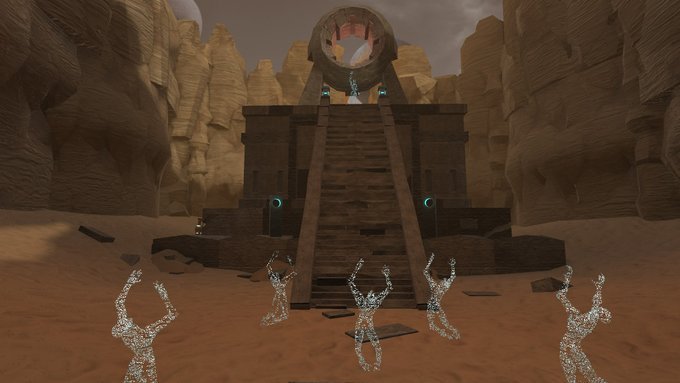 There's something to be said for first-person puzzle adventures created for virtual reality. They're typically  immersive, which means it's a lot easier to get players invested. They're made to feel like you're really experiencing what your character is. With Eclipse: Edge of Light, which began life as a VR-only title, much of that sense of immersion is lost in its Nintendo Switch port. But if I'm being honest, it isn't even really a game I'd want to play in virtual reality.

I can just barely stand exploring by way of the Switch, so strapping on a headset and touch controllers doesn't inspire much confidence that I'd enjoy it any more. With that said, Eclipse is a serviceable game – it works just fine, and it's mechanically sound. It's just not one that I vibed with much at all, thanks to painfully slow movement speed, lackluster puzzles, and an incredibly short play time.

Eclipse: Edge of Light is a puzzle-platformer that finds you having landed on an alien planet. When you wake up, you're surrounded by alien relics and the ruins of a failed civilization. As you look around, you set eyes on a powerful device called the Artifact. It's essentially a ball of light you can throw at things across the alien landscape and have it return to you. You've also got a jetpack at your disposal to help you access the places that appear just out of reach at first.

The Artifact is the main way you'll interact with the environment, breaking plenty of statues and other pieces of decor with it. You'll be working to uncover the secret behind the demise of the alien civilization that left the Artifact for you to stumble onto. The Artifact is simple enough to use. You need only look in the direction you'd like to aim and throw it, and it'll hurtle over there like a softball. Aiming can be a little frustrating, since you're relegated to using the Switch's camera controls, but it's pretty simple to get used to. The ball itself is quite snappy, and it usually responds well if you need to throw it into a switch or into a particular area to unlock a new path. It just isn't very engaging to look around for targets to throw this glowing ball at.

What feels awful, however, is your movement speed. I felt like I was paddling away underwater with every step I took. Tossing the Artifact seemed a bit snappier and normal, but navigation was so painstakingly slow that I didn't feel moved to explore like I would be in a game that wasn't built for VR originally, at least I believed as much. It's not as if the game was having issues with frame rate, but while you play you really tend to feel the slow, padding movement your character is forced to endure.

When you're not walking at a snail's pace around each area searching for puzzles to complete, you can use your jet pack to navigate through caverns and through tunnels. You can't spend much time in the air, because your power is quickly depleted, but it offers a brief reprieve from walking and a bit of verticality, at the very least. Unfortunately, the further you go in the game, you find that it quickly becomes more of a platforming adventure than a first-person puzzler as you zip across temples and find yourself eventually dying from jumps you couldn't make. It's just swapping one problem for another at that point.

Of course, aside from jumping and throwing the Artifact around, there are plenty of opportunities for you to learn more about the world around you by scanning statues and other objects to learn more about them. Sometimes, they'll feature hidden messages that offer more information about the tragedy that befell the alien civilization that had occupied the planet before you arrived. This isn't particularly entertaining, though, as most of the items you can scan are pretty pedestrian in nature.

Aside from its not-so-exciting mechanics like tossing the Artifact around to unlock areas and explore the area, Eclipse: Edge of Light just isn't that attractive. It looks decent enough, but many of the environments end up lacking texture. I imagine much of this is due to the Switch's limitations, but I can't help but think it's just not that attractive of a game to begin with.

Then we come to a completely different issue: the length. I was able to finish the game in just over a couple of hours. It felt much more painstaking than that, but that's because it all felt like such a slog – a very routine adventure that didn't really inspire me in any way. Slow progression, short game length, and a blasé narrative came together to ensure I wouldn't want to take this adventure again...unless I just didn't have much else to do on my Switch. And without VR support for this version, there's no way to even pretend you're really some explorer who uncovered an ancient civilization. You just move like someone ancient.

This review is based on a Nintendo Switch download code provided by the publisher. Eclipse: Edge of Light is available now on PlayStation VR, Nintendo Switch, and PC.

Shack Chat: What is your gaming prediction for 2021?
Review for
Eclipse: Edge of Light
5
Pros
Cons
Login / Register