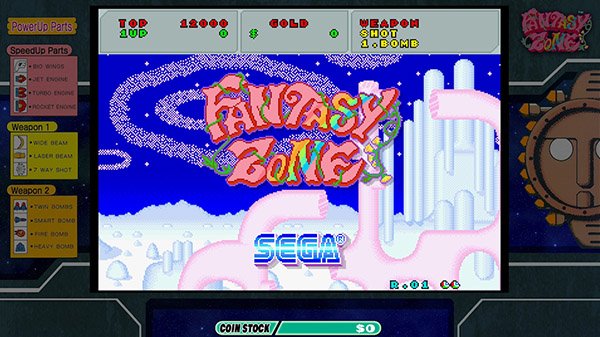 Looking for some classic games to add to your Switch collection? You can pick up Sega Ages Fantasy Zone and Sega Ages Shinobi in just a week or so on the Nintendo eShop.

You're probably already familiar with both, but just in case, you'll definitely want to pick up the classic Fantasy Zone. It's a fun little shooter featuring the tiny winged Sega mascot Opa-Opa. Plus, who doesn't want to complete their Sega Ages collection?

While flying throughout the level, you'll help rescue the titular Fantasy Zone and figure out what's going on with the construction of a strange fortress built within. If you love Space Harrier, you'll obviously love Fantasy Zone.

Sega Ages Shinobi is a totally different animal that follows Ninjutsu master Joe Musashi. It's a side-scrolling platformer that'll have you throwing knives, shuriken, and rescuing hostages. You can even use the game's rewind feature to go back in the game and try it again. The Switch version has a new melee button for you to work toward an even higher score this time around, too.

Both games will hit the Nintendo eShop on January 23, and you can purchase them separately to add two classic gaming additions to your collection. Make sure you get Fantasy Zone if nothing else, because it's a surreal, colorful adventure.