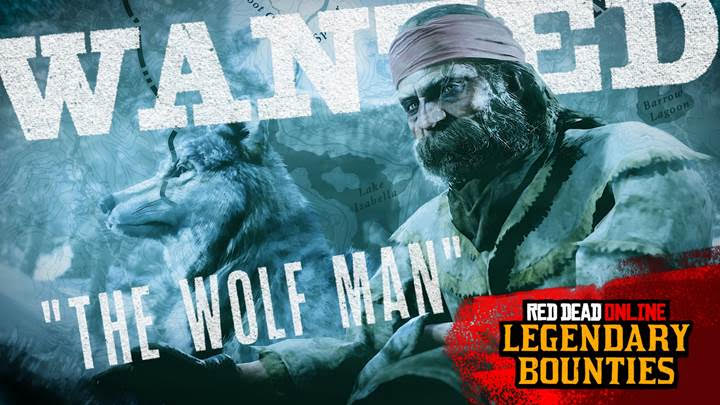 Most games are busy getting into the Halloween spirit, and Red Dead Online is no different.

The game is welcoming the Wolf Man into the game as its new Legendary Bounty. The Wolf Man is a "feral vagrant" wanted for various brutal murders. He's found in the snowy areas in Red Dead Online near Lake Isabella, where a variety of predators like bears and wolves can be prowling around. You might want to carry around some Predator Bait to ensure you're not immediately eaten up and gobbled all the way down.

When you happen to complete the Legendary Bounty, you'll find the bounty again on boards to be completed at a higher difficulty, giving you plenty of replayability to challenge you again. If you tackle the Wolf Man at four or five stars, you'll have to turn him in alive to get a reward for it, though.

Those who successfully finish off the Wolf Man will get a red colorway of the Red Strayhorn Boots, which will be available for 48 hours after you finish your task. It'll be found in the wardrobe under "Boots." There's also a variety of new items in the Saint Denis Collection in the form of the Cognac, the Beaulieux Diamond Ring and Beauchêne Ruby Earrings that must be turned in to a Post Office to Madam Nazar by September 30.

Previously, Bill Lavoy reviewed Red Dead Redemption 2, awarding it a 9 out of 10:

Let us know if you decide to take on the Wolf Man in the comments below.