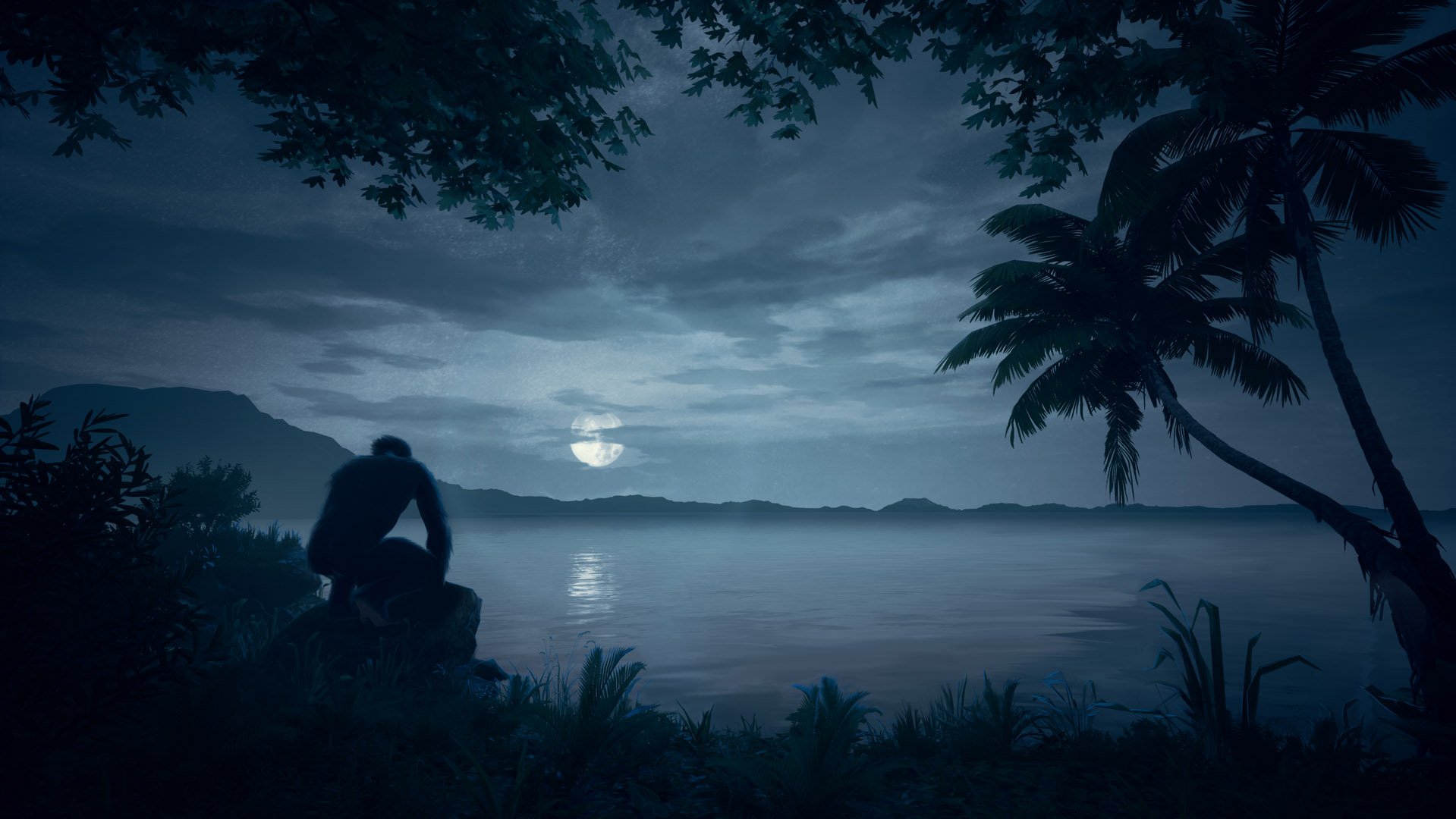 Those who know Patrice Désilets will probably associate him with early iterations of the Assassin’s Creed franchise, known for its parkour and loose ties to history. That’s about where the similarities end between Désilets’ previous work and his latest as creative director of Panache Digital Games, though. Ancestors: The Humankind Odyssey is an open-world survival game that puts players in control of a clan of primates from the Hominidae class, challenging the player to test their evolution skills against their ancestors.

Ancestors: The Humankind Odyssey begins 10 million years ago, and before players are given control, they are informed by the game that they won’t get much help. It’s not lying, either, as Ancestors is one of the more hands-off survival experiences I’ve played. The question is whether that approach is balanced with reward and presented in a way that’s fair to players.

Let’s go for a walk

The first steps taken in Ancestors: The Humankind Odyssey are as a child fleeing a predator. If more forgiving settings are selected, the first 10 minutes are where players can expect a bit of help. Nothing major, just few pop ups about controls and explanations of core concepts, like the game’s intelligence mechanic. Mostly, however, it’s sink or swim, although custom settings are available for players that want a few advantages their first time out.

After a brief introductory mission, the hand holding is almost entirely gone. Wrong choices that can destroy one’s lineage can and will occur in the first hour, although it may take longer to figure out it’s a doomed run. I chose to send an adult male out to explore alone, leading to broken bones, bleeding, and poisoning, an expected trio of ailments given the lack of motor skills and intelligence possessed by my clan. In hindsight, I should have sent an elder; fertile, non-related adults are required to mate and progress through generations. It’s an early example of how common sense and intuitiveness are key.

It’s tough to regret that first expedition, though. It afforded me the opportunity to climb through the trees and jump safely above the would-be doom waiting below. That’s where the Assassin’s Creed vibes kick in. There was plenty of falling (that’s how I broke bones and found a poisonous snake), but for the most part the climbing and jumping was fluid. A few times I felt I should have been able to climb something I couldn’t, or missed a branch I felt I should have grabbed, but with thousands of objects that can be scaled, the few frustrating parkour moments were tolerable.

This first expedition also gave the opportunity to pick up objects and inspect them, learning about my surroundings through trial and error. The more I inspected, touched, or interacted with, the more abilities I unlocked in the game’s evolution skill tree. I spent considerable time using the intelligence mode to spot items of interest, remember them, then make my way over for further investigation. Along the way, I utilized hearing and smell, both essential to detecting predators or spotting non-hostile creatures, such as a potential clan recruit.

The way it all fits together, is players must learn what they can about the world by inspecting or physically using an item in some manner. If this is done with children piggybacking, Neuronal Energy is earned. When players lie down in a bed at their settlement, this Neuronal Energy can be used to activate the abilities discovered. The goal is to activate the abilities a player values, reinforce them by having kids and passing generations, and then ultimately evolving when the time is right. Each time you evolve, the game provides feedback about whether you're ahead or behind your ancestors.

Listen carefully to the world around you

That first expedition was filled with anxiety and fear, but as I became more comfortable, I was able to take in Ancestors’ visuals. There’s nothing to complain about with Ancestors in that regard. The environments are detailed and include jungles with huge waterfalls, beaches, swamps, and even savanas. There are moments where the views are gorgeous, and on more than on occasion I climbed the tallest tree I could find to take it all in.

The music in Ancestors: The Humankind Odyssey impressed me more than the visuals. It’s subtle in how it fits with the gameplay. Most of the time I didn’t notice it, but the soothing combination of drums and woodwind instruments works well and never dominates, which is key.

Ultimately, the audio and visuals of Ancestors aren’t important for aesthetics or loving the music, but because they’re required to make decisions from one minute to the next. A subtle tone might hint at the exact moment to plunge a sharpened stick into the water to spear a fish. A quick look at a clanmate can hint that they are in poor health and require treatment. I appreciated that the visuals gave me information I needed to make decisions, and that the music wasn’t so overpowering that I missed audio cues. Players will depend heavily on both.

Ancestors has captured much of the intuitive trial and error gameplay that rewards intelligent decisions, but it’s not a perfect deployment of the mechanics. There were too many times I found myself unsure if I was doing something wrong or experiencing a bug.

While following the instructions to overcome the fear mechanic while exploring outside my clan's home range, the option to do so was not there. After becoming hysterical, I was teleported back to my settlement. This happened three times, eating about 30 minutes of play time, before I realized I might need to be on the ground to overcome fear, not in a tree. I was in that tree because below me was a giant cat that wanted to bite my face. Eventually, I learned that I needed to stand in a very specific spot to overcome my fear, but I spent a good half hour frustrated, unable to figure out what I was doing incorrectly. There are a few moments in Ancestors where players are likely to wonder what they're doing wrong, or if the game is simply bugged. Yes, they will eventually learn, but improved feedback could save a lot of headaches.

Where Ancestors walks a fine line in this regard is with its consequences. I have no problem losing hours of play because I made a mistake and know what that was, but I’m not okay losing progress due to circumstances beyond my control.

When a saber-toothed cat wandered into my settlement, I ended up in a loop where stabbing it several times didn’t kill it, and the primate I controlled entered a state of hysteria. When hysterical, the game teleports the primate to their settlement, but I was already at my settlement. This put me in a cycle of being teleported mere feet from where I had my meltdown, instantly pushing me back into a state of hysteria and being attacked by the giant cat. I couldn’t defend myself or switch characters, so I let it eat me. I was given control of a new primate and managed to kill the intruder, but not before this cycle of events cost me four members of my clan. I was left with three, and that drastically slowed the growth of my population through generations.

The selling point of Ancestors, though, is that it’s about overcoming challenges and seeing if you can take the worst that the world will throw at you. Yeah, the worst in this case was a nonsense situation, but it didn’t take long before I couldn’t wait to get back and dig my clan out of that hole. Plans to survey my remaining population, mate, and recruit new clanmates took over. Ideas of how to better prepare for settlement attacks got me excited to tackle this obstacle. What Ancestors does is makes you think about it when you’re not playing, poking at your curiosity for what is possible. That’s where it’s at its best.

Ancestors: The Humankind Odyssey throws down the gauntlet for its players, asking if they have what it takes to not only survive, but thrive. This challenge is not for everyone. Lack of hand holding will infuriate the impatient used to being told what to do and when. This, by no means, is a knock against Ancestors. Like myself, there are many players who enjoy this approach in their survival experiences.

The game could dial back in a few places without sacrificing the integrity of Ancestors’ hands-off approach. The fear mechanic doesn’t work for me. It doesn’t feel like something I want to overcome, but rather a restrictive force that stops me from wanting to explore. Fear ties in with hysteria, which can take control from the player. That’s never ideal. Even early-game counterattacks feel off. Nothing should take four spears to the chest and keep attacking.

What Ancestors does best is reward players with moments of joy when they overcome an obstacle. Few things will top taking down my first Giant Warthog, and even though I lost four clan members -Press F to pay respects- to something largely beyond my control, don’t think there wasn’t immense pride when I killed it. Every conquered obstacle provides satisfaction and makes me want to figure out more of life’s earliest puzzles.

This review is based on a PC code provided by the publisher. Ancestors: The Humankind Odyssey will be available on August 27, 2019.