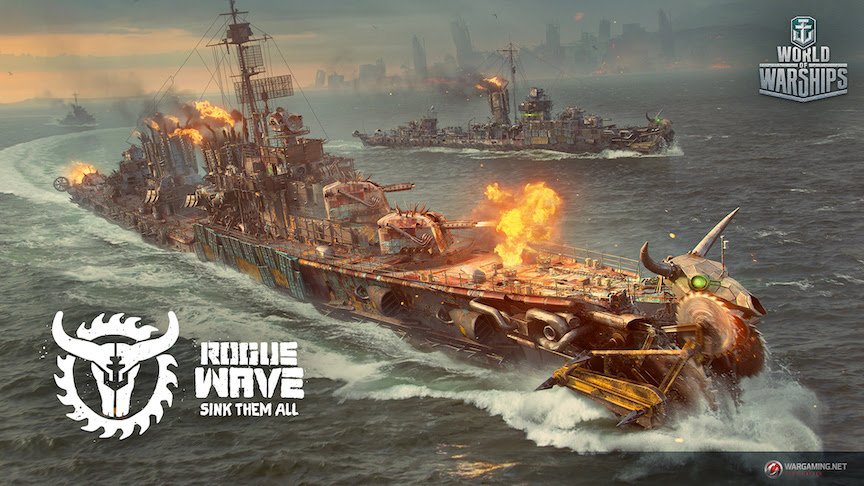 Just when you thought you'd seen the last of new battle royale modes, another game entirely adopts one. This time, it's Wargaming with World of Warships: Rogue Wave. The temporary battle mode that's "set in a dark and toxic sea world" will be coming to the game with the new 0.85 update.

The update will also introduce two new seasons of Ranked Sprint and a few mechanical as well as cosmetic changes. Rogue Wave won't be in the game permanently, so if it interests you, you should go ahead and try it out. Players will be divided into four teams of three as they fight over resources in the ruins of a sunken city. More than two teams can go to battle in World of Warships for the first time ever.

The match will begin with players having no consumable items and they'll have to head out into a world that's about to collapse with nothing bu their own ships and what's on board to stay safe. Like other battle royale titles, there'll be a constant encroaching circle to keep players moving toward each other (the Wild Fire). Get caught in the fire, and you'll lose HP.

There are also three new ships classes for the new mode that you can explore, as well as four new Directives with ten missions apiece. Finishing these missions will net you Fuel Tokens and other in-game items that can be spent in the Armory or on another premium ship.

That's not all, though. The update will also include two new seasons of Ranked Sprints as well as Clan Brawl, a series of battles where clans will duke it out with one another. You can find additional details about everything in the update on the official World of Warships blog. In the meantime, we'll see you out there on the battlefield – or in this case, on the water.