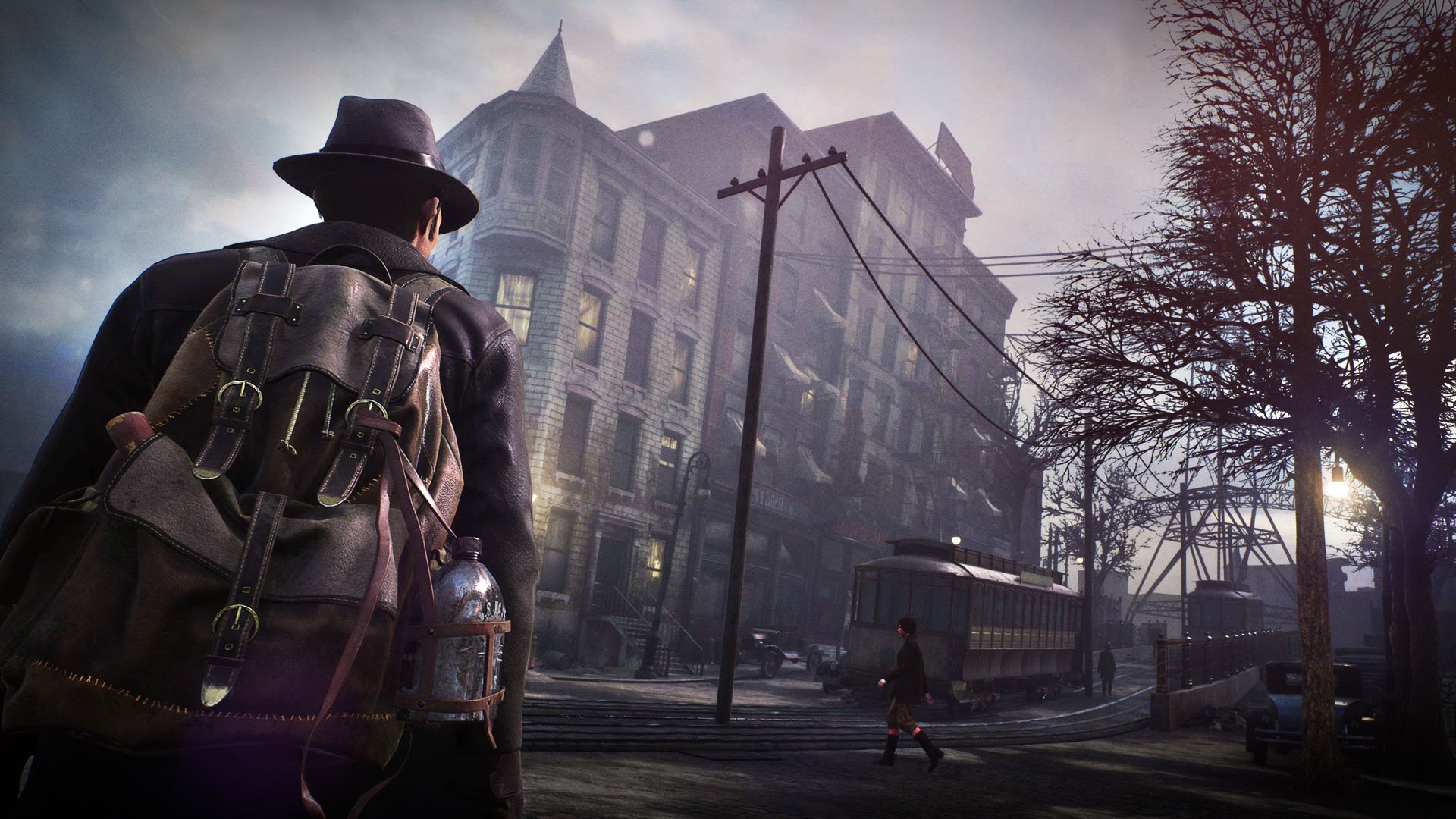 The Sinking City review: Rough around the edges

I’m a pretty big fan of Lovecraftian horror, so when I learned that Frogwares was creating a game within a Lovecraftian inspired setting, I was intrigued to see how they would do it. Set within the 1920s, The Sinking City follows Charles Reed as he arrives in Oakmont, Massachusetts, a city that for all intents and purposes has been cut off from the world for many years.

Following his own supernatural visions, Reed finds himself in the foggy city, where extensive flooding has left much of it in ruin. Reed will need to use his skills as a private detective to explore the city, find out what it is causing the visions, and even save the world from a threat that looms beneath the earth. It’s an intriguing tale that keeps you slowly moving forward and through twists as you go. Along the way, Reed meets several interesting people, all with their own problems and motivations. It’s up to you as the player to put together all of the clues and solve the mysteries that are placed before you.

The gears of mystery

The Sinking City builds heavily off of Frogwares’ experience with the Sherlock Holmes’ games. As Reed, players will collect evidence from various scenes. Once they’ve collected everything, they will need to put it together in the Mind Palace, which essentially allows them to map out Reeds’ thoughts based on the information he has learned through his evidence gathering.

It’s a nice little mechanic, though it can get annoying at times as sometimes the clues given in the Mind Palace don’t always fit with something right away. That, however, doesn’t stop the game from reminding you that you have a new clue every two seconds, which can be rather distracting when you’re trying to find that last missing clue. Still, though, the system works almost flawlessly (the notifications being the only real negative here) and it really helps you situate which facts are important and which clues you can ignore.

Taking this base clue-based system, Frogwares also adds in some supernatural elements to it that allow Reed to look deeper into things and see what has happened. This makes following harder-to-read clues a bit easier, as supernatural spirits of some sort will guide him along the way. It’s a nice touch that makes Reed feel like he’s actually in tune with the supernatural side of things. As you progress through the game, growing closer to the darkness below the city, it gives room for that connection to grow stronger and thus more dangerous.

One big thing that players will notice as they explore The Sinking City, though, is the emphasis that the game’s writers put on choices and in turn, the consequences that follow after those choices. As Reed, you’ll find yourself on the end of several morally charged decisions throughout your time in Oakmont. Decisions that could change the outcome of the lives of those around you.

During one of the quests that I undertook, I found myself framed for the murder of an important person in the town. However, I’d done no such thing. After some careful deducing, I discovered a complex ploy to try to shut down my own investigations into the problems the city was experiencing. With all the information on hand, I had a choice to make. I could turn in the man who had actually committed the murder—he seemed like a nice guy that had been backed into a corner and given no choice. Or I could frame someone else for the murder—someone who wasn’t such a nice guy and just all around a piece of scum that took advantage of everyone he could. While the decision itself doesn’t heavily change the outcome of the game’s main story, it still left me with a choice to make. A choice that would ultimately have consequences in Reed’s own story.

The depths of one’s sanity

Knowledge is power in The Sinking City and knowing things will be key to your survival throughout Charles Reed’s harrowing tale. As you learn things, though, you’ll need to be careful. Charles Reed is a fragile being, and there are things in this city that are like to drive a man quite mad. The idea behind Lovecraftian horror has always been a fear of the unknown, the things that we can’t see in the darkness outside our window. The Sinking City has captured that feel very well, transporting players into a dark and mysterious world that begs you to dive deeper into it, if you’re brave enough to.

As Reed grows closer to the source of the visions—and thus the source of the city’s other problems—his own sanity is called into question. Does he truly believe the things he is seeing and hearing? Or are they figments of his imagination? The Sinking City does a good job of toying with the players, having Reed hear voices or even see visions if they let the Sanity bar get too low. It’s a nice feature that isn’t hard to manage in most circumstances but also adds a nice touch to the experience overall.

The muck on your shoes

While the story and the setting are all nicely done, there’s one glaring feature of the game that I just can’t forgive: the combat. Some games are just not meant for combat and The Sinking City is one of them. Wonky hit registration means that some shots don’t hit when they should—a very exhausting issue to deal with in a game where ammunition is so scarce. On top of that, there are several sections of the game where combat is forced upon the player. While I get the depth added by having Lovecraftian-styled creatures throughout the story, the forced combat and scarce ammunition mechanics make for an exhausting and sometimes aggravating experience, especially in later portions of the game.

Infested areas litter the city, promising supplies, and rewards for those willing to go in and kill the beasties within. The unfortunate thing is, the rewards are often so meager that it isn’t worth the aggravation that comes with trying to kill a horde of Wylebeasts (little octopus-like creatures that dodge away from you) and other baddies. Shooting is clunky, and the weapons all feel far too weak to be effective—with even the most basic enemies sometimes taking multiple shots from a shotgun in close range to kill. I’d have had a much better experience without the combat thrown in, or just with a more refined combat system.

The combat isn't the only muck that players will find around, though. The Sinking City also includes several underwater sections that players will need to navigate. In these sections, Reed is outfitted in a diving suit and forced to explore the depths of the ocean bed around the city in search of caves and other locations. While it does a nice job of helping to show off just how cut off the city is from everything—and how intricate the entire mystery here is—it’s also rather annoying to navigate. Each underwater section is rife with obstacles, including Lovecraftian inspired enemies that will attack if you get too close.

Reed is equipped with a Harpoon Gun and a Flare Gun, both of which are basically useless against the creatures that you encounter underwater. In most cases, I found myself simply having to run forward while holding down E to repressurize my suit (which acts as your health in this case). It was a very annoying thing to deal with, and the game really felt like it could have done without those underwater sections at all, had it not been for the massive Lovecraftian creatures that you could just make out along the edge of each section. Each dive trip also included the exact same loading screen/cutscene for diving and surfacing, which felt out of place as not every location was the same as that first one that players explored.

Aside from the issues above the game handles itself fairly well for the most part. The Fast Travel system is handy, allowing you to get around easily, and the basic movement systems like walking, running, and even using the boats in flooded portions of the city feels smooth enough. I was a very big fan of the way that the game has you use resources like the police station, library, and even City Hall to look up records, reports, and other things along your journey. This made the entire private eye process feel more realistic and really helped to get the player into the role of Charles Reed.

While The Sinking City is far from perfect, Frogwares has done a great job of bringing their unique Sherlock Holmes formula to a new home. The Lovecraftian-inspired setting is dark, dangerous, and a thrill to explore. While combat is clunky and forced a bit too much at times, the setting and story are more than enough to make up for it. Choices feel weighty and consequences feel real as you explore the city and grow closer to the darkness brewing beneath Oakmont.

The Sinking City feels like a mystery novel brought to life within a video game. The developers have captured that feeling of intrigue and danger perfectly. Sure, there are some rough bits attached to the entire ordeal, but overall Frogwares’ latest title is a fun romp through a dark and dangerous world that’s rife with problems for players to solve. If you’ve ever been a fan of Lovecraftian horror or just mystery stories in general, The Sinking City is one stop you’ll want to make a little time for on your trip down the rabbit hole.

This review is based off a PC copy of the game provided by the publisher. The Sinking City will be available on June 27 for PC, Nintendo Switch, Xbox One, and PlayStation 4.