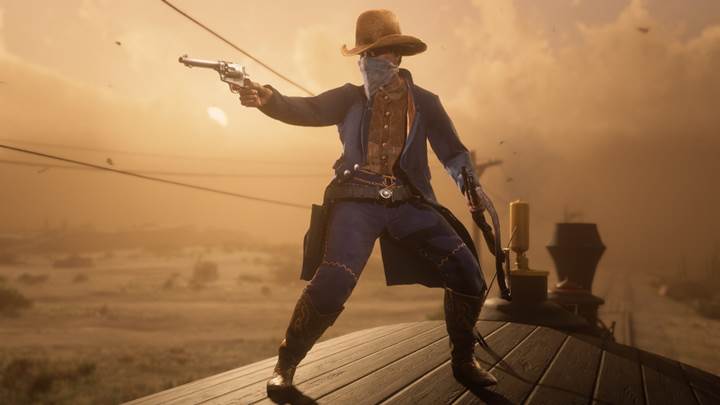 Looking for something new to do in Red Dead Online? Rockstar Games has you covered.

Right now, you've got until June 24 to hit ranks 10 and 20 in-game, which will net you a pair of care packages with ammo and provisions. If you're at least rank 10, you'll get hunting supplies like baits, 20 Small Game Arrows, Poison Arrows, and 20 Fire Arrows to help with, well, anything you need them to.

Hit rank 20 by June 24 and you'll get 5 tins of Jolly Jack's that help bolster your Dead Eye meter with a gold outer bar as well as 3 Oregano Big Game Meat items that will give your Stamina meter a gold core as well. Gilded bars are great bars, in case you didn't know.

An outlaw always needs to look their best, naturally, so there's also plenty of new outfits on offer. The newest clothes available in the Wheeler, Rawson and Co. catalogue in-game will include the Charro Jacket made out of deerskin with brass buttons on the breast and cuffs, the Vaquero Baroque Spurs, Clymene Coat, Lightfoot Pants, and Austin Boots. Basically, you're going to be able to level up your style in a big way. And you're going to want to make sure you look good, no matter what you get up to, cowpoke.

If you don't happen to get the outfit you want, you can always fall back on using the Hissy Fit emote, which will send your avatar bursting into a tantrum. Not very becoming of a cowboy, but hey, sometimes you've got to let all that anger out.

Most importantly, there's also a new Elimination Series playlist. From the Red Dead Online menu screen, you can join the Elimination Series to compete in Make It Count with your bow and arrow or Throwing Knives throughout the wide world of Red Dead Online. If you decide to take part, you'll get a 30% XP boost and RDO$ boost, which isn't bad for just joining a few games. If you win a match, however, you'll get 60x High Velocity ammo for each class of gun, including pistols, revolvers, repeaters, and rifles.

There's a lot to see out there, so get along, little dogie!