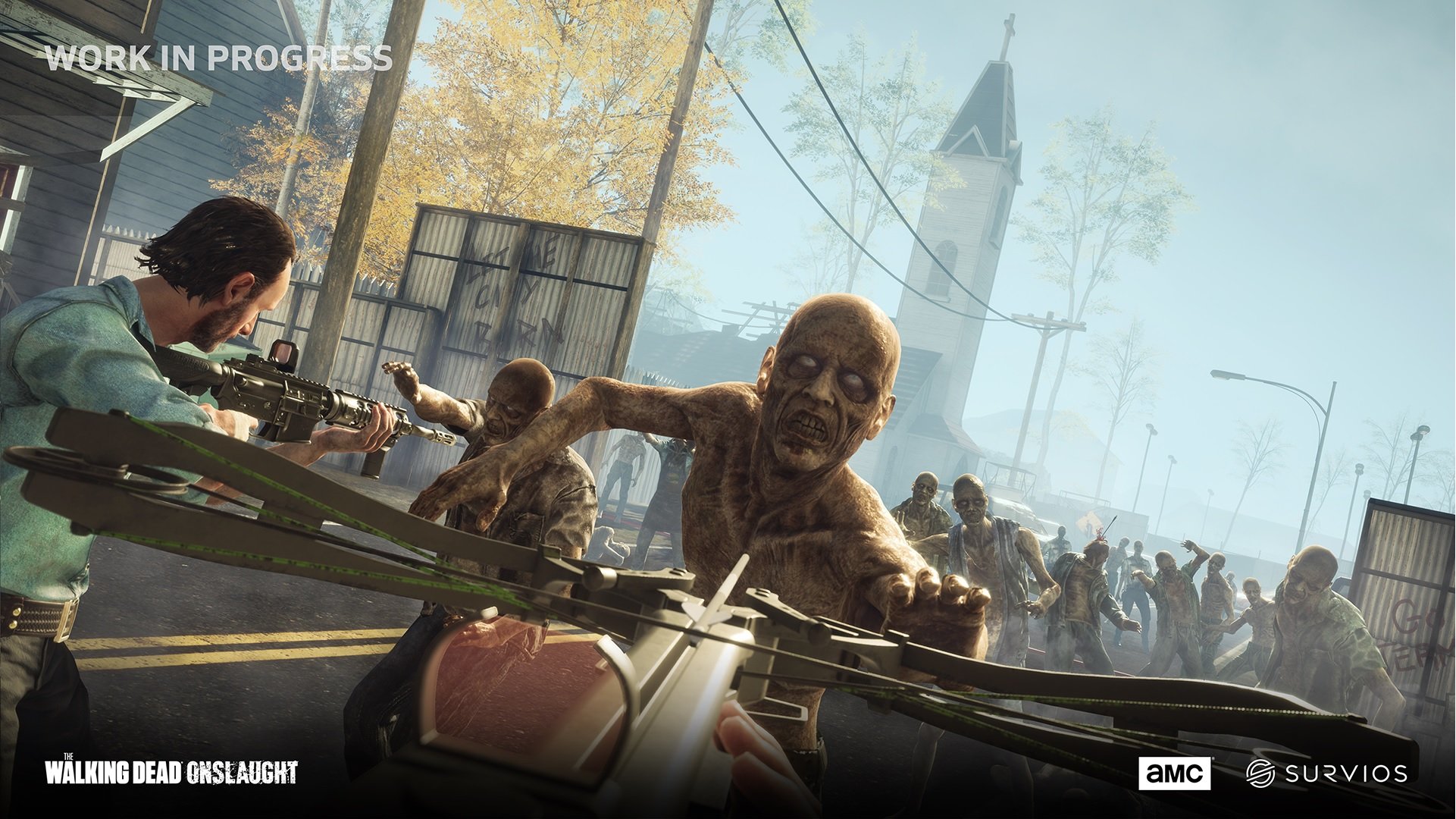 The Walking Dead comics have been a goldmine for entertainment content ever since the comics were spun out into a television series nearly a decade ago. The Walking Dead has been adapted into TV, video games, movies, and more. The team at Survios VR look to take their own crack at the iconic zombie apocalypse IP with The Walking Dead: Onslaught. I had the opportunity to play around half an hour of Onslaught at E3 2019.

When speaking with CCO and co-founder of Survios VR James Illiff, he provided some intriguing insight to what went into bringing the game to life. Survios worked closely with AMC to ensure that The Walking Dead: Onslaught felt perfectly in tune with the television series. In fact, the developers were even able to land some talent from the show to reprise their roles for Onslaught. For example, Norman Reedus lent his talents to voice Darryl Dixon. Darryl is just one of multiple characters fans will recognize when they get their hands on Onslaught. Rick Grimes, Michonne, and Carol are all central characters in the original seven part story.

The demo took place in a suburban neighborhood, somewhere in the middle of The Walking Dead: Onslaught’s story. Something that I immediately picked up on was the intuitive locomotion controls on display. The best part of virtual reality is that it immerses us in a world. However, it’s hard to keep this sense of reality up when it comes to navigating the world. Many VR titles have the player teleport or move around using an analog stick to maneuver the world. Although these are serviceable methods of transportation, The Walking Dead: Onslaught kicks it up a notch. To walk in Onslaught, you just hold a button down and swing your arms by your sides, just as you would when walking in real life. It seems like a small touch, but really helps with the immersion, and makes gameplay smoother.

In terms of gameplay, there was one key aspect that I was most curious about when jumping into Onslaught - the zombies. I’m happy to report that the zombies creepy and fun to fight, with a variety of ways to do so. Something that was emphasized to me during my time with Survios was the technology behind the walkers. Each walker is covered in what is essentially a digital mesh suit. Therefore, the levels of gore that can be reached is pretty glorious. You can carve letters and symbols into their bodies, and watch as the blood spills from their insides. You can also sever their head and limbs at different points. This led me to use an array of different weapons for the sheer fact of seeing how many different ways I could mutilate the body of a walker.

All in all, The Walking Dead: Onslaught is fun to play, and feels like a worthy addition to the pantheon of content deriving from Robert Kirkman’s hit graphic novel series. Innovative locomotion, and thoughtfully designed enemies highlighted my time with Onslaught. I look forward to seeing how Survios builds on top of the solid foundation laid when The Walking Dead: Onslaught arrives on VR devices this fall.