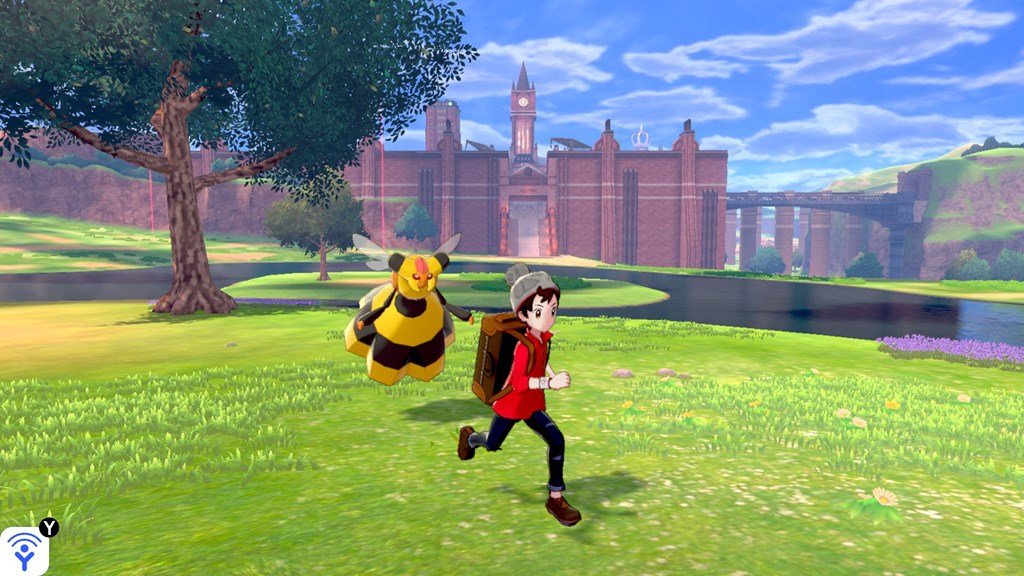 Ever since the Nintendo Switch was revealed back in 2016, fans have been chomping at the bit to get a mainline Pokemon game on the hybrid console. Three years later, It’s finally arrived in the form of Pokemon Sword and Shield. Set in the Galar region, these games introduce new characters, Pokemon, and mechanics. We had the chance to play a demo of Sword and Shield at E3 2019, this is what we saw.

The demo ran for about 20 minutes, and was contained entirely inside of a Pokemon gym. Therefore, we weren’t able to see the open world in action. The gym I played through was entirely water based. It’s unclear where this gym is in the full game because all of the Pokemon were set to level 50, and little context was given on where we stand in the story. The demo opens with the player entering the gym and being briefed on what the experience will be like by a man standing near the door. This won’t be too unfamiliar to Pokemon fans, seeing as there’s always been a character like this inside of gyms. Interestingly though, the man said he could heal my Pokemon whenever I returned to him. This is a solid quality of life improvement, knowing that I won’t have to completely exit the gym and run across town to fully heal my pocket monsters before taking on a gym leader.

The gym itself hosted a handful of trainers and puzzles. Again, nothing out of the norm for the Pokemon games. I had to flip a series of switches in order to redirect the flow of water through different pipes, so that I’d open up a path to the gym leader. I found the puzzles to be fairly simple, with only the very last set of water pipes making me give some critical thought into what I was doing. What I was most looking forward to in the demo were the battles, and I can say I was neither extremely disappointed or really impressed with what I saw.

Sword and Shield mark the beginning of the 8th generation of Pokemon, meaning there’s a brand new batch of new creatures to discover. For the demo, I had a party of all three starter Pokemon in Sword and Shield - Scorbunny, Grookey, and Sobble. In addition, there were three more Pokemon brand new to generation 8 - Corviknight, Yamper, and Wooloo. I made sure to use all 6 members of my team throughout the gym in order to get a good sense of how they felt in battle.

The battles themselves didn’t feel too far removed from what we saw in the Let’s Go games. To be quite honest, I was let down by the fact that the majority of Pokemon moves still don’t have unique battle animations. For example, when using double kick. Scorbunny does a tiny hop in place, and the opponent takes damage. This is the exact same battle animation we’ve been seeing since the franchise first made the transition to 3D 6 years ago. It’d be so awesome to see Scorbunny actually spring forward and double kick the opposing Pokemon. Pokemon Colosseum had more expressive battles and that game came out in 2003.

Once I made my way through the trainers and solved the water puzzles, it was time for my battle against the gym leader. This was easily the highlight of my time with Sword and Shield. I walked through a tunnel, and once I emerged on the other side, it was like I was competing in the World Cup. There was a packed stadium of people and Pokemon cheering, and the playing field itself was enormous. This is how gym battles should feel, like an event.

I then met the gym leader herself, Nessa. Bursting with personality and style, she quickly greeted me and told me it was time to battle. We walked away from each other, turned around, and threw out our first Pokemon. I’d like to emphasize the fact that all of this happened without the screen quickly cutting to black or any other sort of loading screen. From cutscene to Pokemon battle was all one fluid motion. This, along with the camera work made the leadup to our showdown feel cinematic.

During my battle with Nessa, I got my first look at the new Dynamax feature. Dynamax allows players to transform one Pokemon in to a much larger, and much more powerful version for itself. From a visual standpoint, Dynamax is really cool. When your Pokemon grows larger, the sky turns red, clouds swirl around the gym, your controller vibrates as they crash down onto the playing field, and the crowd goes wild. It was glorious. However, I have some concerns on how the new feature actually affects gameplay.

During our battle, Nessa used Dynamax on her Drednaw, a snapping turtle Pokemon. While in this form, it felt as though none of my moves were effective, and like everything she did was super effective. Now, I get it. That’s the point of Dynamaxing your Pokemon - for an advantage. But that’s not how it felt. I felt as though I had two choices when my opponent’s Pokemon turned into a Kaiju: sacrifice one or two members of my team to buy time until the Dynamax wore off, or Dynamax right along with them. Maybe this isn’t entirely fair. Maybe Drednaw is just really beefed up in terms of its defense and special defense stats. It is a turtle, to be fair. But if it’s any indicator as to how a typical battle feels with Dynamax, I can’t say that I’m over the moon about this new feature.

After the battle, I received my badge from Nessa and the demo ended. I know there’s been quite the controversy surrounding Sword and Shield after it was revealed that players won’t be able to transfer over just any Pokemon they’d like. Let it be known that no more information on this was given in the E3 2019 demo, seeing as there was no Pokedex and I wasn’t able to see any wild Pokemon.

Pokemon Sword and Shield still has the stylistic charm and flare that I’ve grown to love as a lifelong Pokemon fan. I also really like what I’ve seen of the new generation 8 Pokemon as well. However, playing the demo really highlighted some concerns for me going into these new installments. I look forward to seeing how things shake out when Pokemon Sword and Pokemon Shield release on November 15.