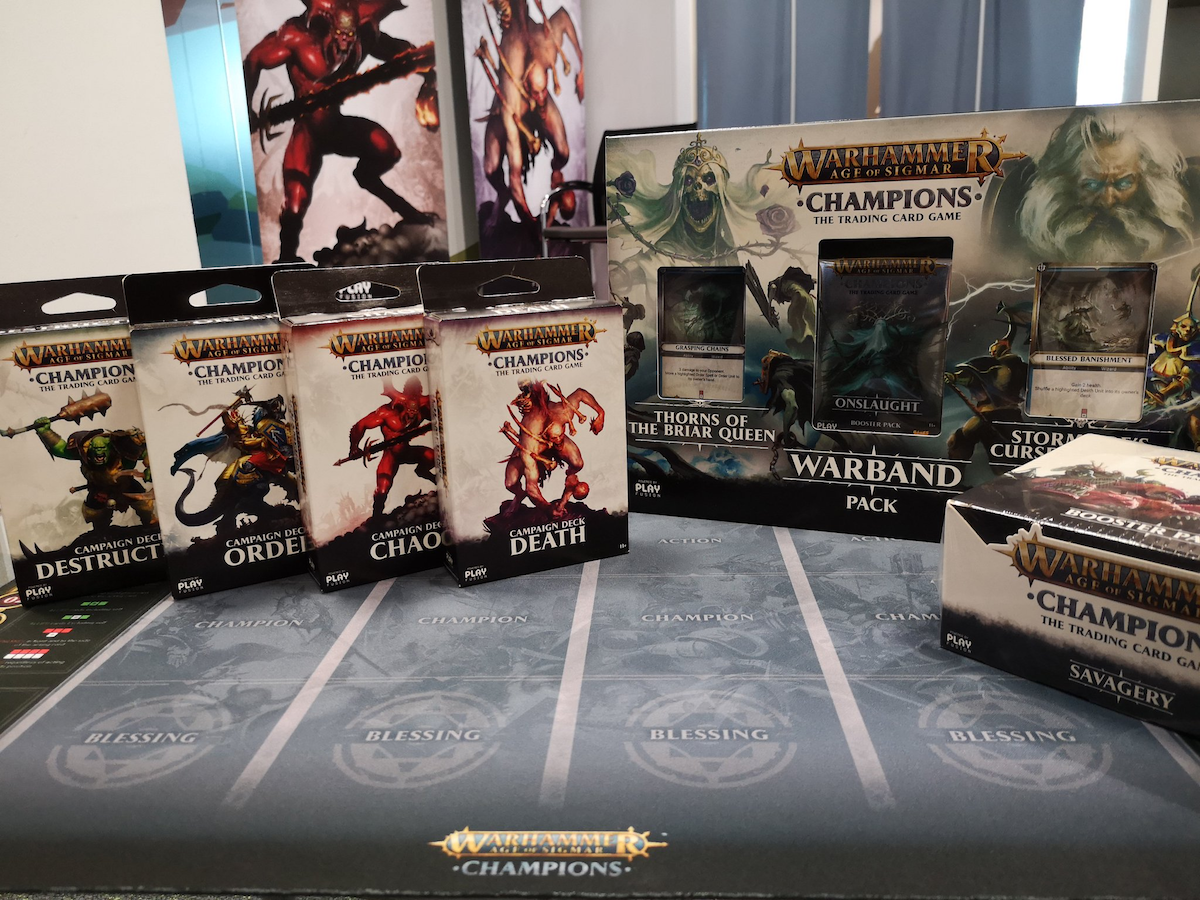 Trading Card Games (TCG) have been around for a long time and we’ve seen a lot come and go. With Magic the Gathering being the top dog in the physical card space closely followed by Pokémon TCG, a new opponent has entered the ring. Warhammer Age of Sigmar: Champions. Does this TCG have what it takes to stand on its own?

We are the Champions

The company behind Warhammer Age of Sigmar: Champions, let’s call it AOS: Champions for short, may sound familiar. AOS: Champions is from the mind of Studio Playfusion, a group who created an original card game before this called Lightseekers. Lightseekers was a trans-media game that existed in both a digital and physical space. It even had its own video game (outside of the digital card game) that worked with cards via a scanning AR feature. AOS: Champions borrows heavily from this previous game’s design and it works relatively well.

The cards themselves are based on the Warhammer universe. Spells and Units that exist in the tabletop game are present in AOS: Champions. Spells like Emerald Life Swarm, Arcane Bolt and Units like Khorne Bloodletters, and Hexwraiths are playable cards within the game. The art is also great on the cards making use of the dark fantasy art style of the Warhammer universe. The card game features four different factions each with their own playstyle: Death, Order, Destruction, and Chaos. Each faction has their own unique cards to play and use, different Champions to field, and so forth. Of course, there are universal cards that anyone can play as well.

The cards you're dealt

The goal in AOS: Champions is to defeat your opponent. You do this by creating a 38-card deck. Your deck consists of 30 core cards. There are units, abilities, and spells. The other eight are on the board itself and never get shuffled into your core thirty-card deck. These are your Champions. You place each one in each of the four different lanes.

The last cards you place are your Blessings. These are four powerful cards you place at random beneath the Champions. Blessings become activated once certain requirements are met for each Champion. The Champions in each lane are either Warriors, Wizards or both. This determines the cards you can play in that lane. The game has a lot of these Champions. Most are faction-specific, and some have unique, passive, or abilities you can activate. You don’t attack these Champions directly, they cannot be removed from the game, and they don’t have health. Instead, you have a base health pool of thirty which can go higher or lower depending on each Champions’ cost. Whenever damage is dished out, you subtract it from your master health pool.

The Blessings are powerful cards put below each Champion at random. When you play a card in that Champion’s lane, you rotate the card to the left if it meets the requirements in the top left corner of that Champion. Once four certain types of cards or requirements are played, you flip over the Blessing attached to that Champion and gain its effects. Some are passive permanent bonuses, others are limited buffs, or in some cases, they can be activated a handful of times before being exhausted.

This is the Age of Heroes

You play cards using actions. Unlike Pokémon TCG, Magic the Gathering, and even Hearthstone, there are no resources in AOS: Champions. Instead, you’re given two actions per turn to play a unit, ability card, use a heroic action, or cast a spell. Some cards have an instant effect, like ability cards; however, unit and spell cards follow an innovative formula. At the start of your turn any unit or spell cards played last turn, rotate to the left. Then their abilities kick in for a variable amount of time. Some of the cards deal direct damage to your opponent and others cause you to gain heath, draw cards, or other actions. It all depends on the number in the top left corner and the cards flavor text.  You draw cards for every action you don’t use at the end of your turn.

There are some cards that allow you to gain actions or draw cards, but these seem rare. The two actions per turn mechanic is what makes the game really shine, making each turn as equally important as the next, and playing a major role in your tactics in deciding strategy. Since the resource of actions is always two per turn it makes for a more enjoyable game.

Card games that have playable resources like lands or energy can cause the game to start off relatively slow and then ramp up quickly towards the end. Turn ten on a Magic the Gathering game, for example, can get pretty bonkers depending on how much land you have. The AOS: Champions resource system makes for an overall better experience creating a pace of the game better balanced for the entire length of the match.

Warhammer Age of Sigmar: Champions also features a fully digital version of the card game that is free to download on Android, iOS, Steam and Nintendo Switch. This free-to-play game is identical to the physical version but has a great innovative integration with the physical card game itself. In Pokémon TCG, you receive a QR code to scan that comes with a physical pack of cards you purchase. This nets you a digital booster pack of that set to add to your Pokémon digital collection. AOS: Champions does one better.

Instead of giving you a random pack of cards via a QR code, each card itself has a unique digital code along the borders, giving you that exact card. If you scan cards you already have it unlocks in-game rewards like digital packs, avatar pictures, or more in-game currency.

The digital version of the game itself is great. It allows you to build decks, view your collections, do daily or weekly challenges to obtain more digital cards, and you can buy digital packs based on your faction via the in-game store with premium of free currency, earned by simply playing matches. The digital version of AOS: Champions is well-polished, easy to understand, has fun attack animations and is really functional. The only con to the digital version is the soundtrack. The consistent drumming gets old fast and you’ll be quickly muting the music in the game.

Warhammer Age of Sigmar: Champions has a lot of great ideas. Combine this with the rich and deep Warhammer universe and you have the makings of a great card game that’s different and unique enough to stand out against the two big behemoths that are Magic the Gathering and Pokémon. The card game currently has three sets, The Base Set, Onslaught and Savagery. If you’re looking for a fun and new card game that has both physical and digital elements, you should definitely check out Warhammer Age of Sigmar: Champions.