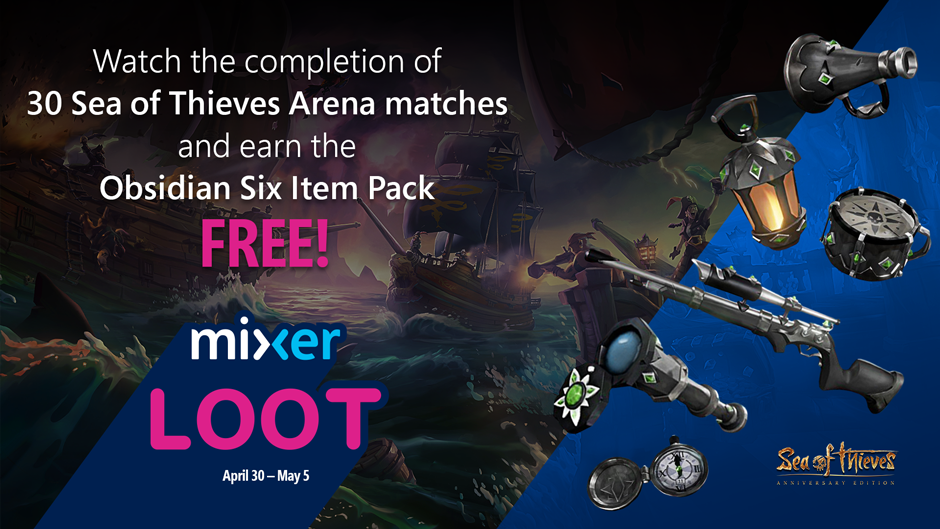 Mixer Loot is a new AI-powered reward feature from Microsoft

If you're a regular Mixer user, there's a cool new feature that you'll definitely want to make use of.

Mixer Loot is a new way to earn special kinds of new in-game content simply for watching different streams. Using the same kind of AI-powered technology that works with HypeZone, it scans streams on Mixer to figure out when cool or interesting moments happen and subsequently rewards you simply for watching them.

All you need to do to participate is look for channels that have the Mixer Loot icon by the stream's title. The feature will launch for the first time on April 30 alongside the Sea of Thieves Anniversary Update, and you'll be able to snag the legendary Obsidian Six Item Pack around the same time by watching all the new Sea of Thieves content debuting around that time. You'll need to watch 30 different Sea of Thieves Arena matches on Mixer from April 30 through May 5, while supplies last.

You can check what kind of progress you've made throughout the game getting the loot you're interested in snapping up by going to a stream page and checking the My Loot tab. You'll get the code you need for your item for the platform of your choice here.

For additional info on how Mixer Loot works, you can check out the official blog announcement. It's important to note that not all streams will support Mixer Loot, so before you set off on a journey to collect all the goodies you possibly can, make sure you check and see if you're using an applicable stream first. When you complete a challenge, you'll see your Loot appear directly afterward. You'll be limited to one reward code per account per each opportunity.

Get out there and get to looting!