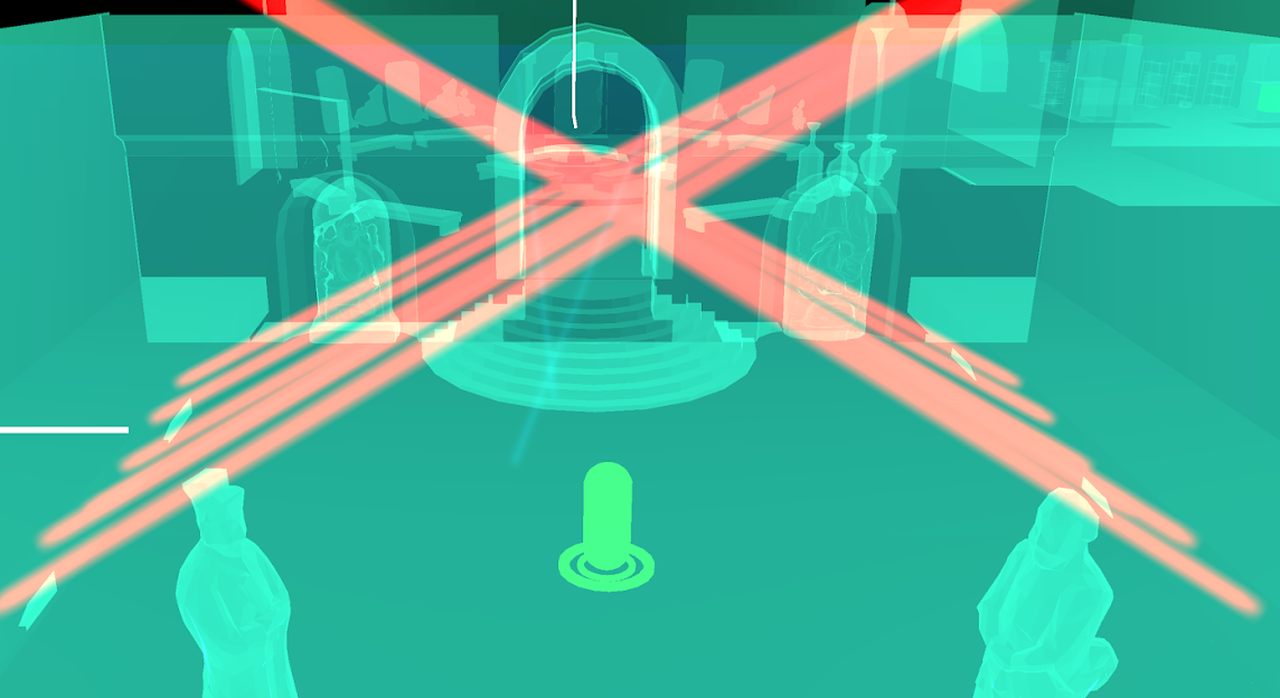 Multiplayer virtual reality games come in different flavors and a handful of developers have experimented with some asymmetrical modes where one player has a specific type of engagement with a VR HMD and the other uses a non-VR means of interaction for a very different experience. Covert from White Elk is creating such a game with one player using an Oculus GO and the other using an Android or iOS device for some cool local multilayer secret agent action.

Covert is a good project from White Elk that stumbles a bit but does lay the foundation for some solid asymmetrical VR experiences.

Covert comes down to two distinct experiences: the secret agent that the VR user is controlling and the hacker that is using the mobile device. The gameplay is balanced well enough that I’d say it is worth playing as both and I don’t think either player will feel completely robbed of an experience when handling the hacker duties.

Covert’s requirement for an Oculus Go and a mobile device is a brilliant opportunity for fun local play, but that limits the experience too. As the VR player, I have a code tied to my playthrough that must be given to the mobile player. There’s no matchmaking of any kind, so the onus is on the VR player to find a companion. It would have been convenient to be able to randomly team up with mobile players.

The gameplay is of a stealth variety, requiring both players to work together to sneak around to objectives. As the agent, I have an arsenal that allows me to take out enemies, grapple to locations, and more. The rule of thumb is to stay hidden, though. Oculus Go limitations stand out here, as I naturally wanted to look around corners to get an idea of where enemies are. That’s impossible with the HMD's tracking so the hacker has to tell me exactly where enemies are and when I should move. This gives the hacker more agency in the experience, but feels unnatural.

The overall collection of activities truly sell the secret agent motif on both ends, from sneaking around lasers and spotlights to hacking spotlights and blowing up missiles. It’s enjoyable and can be a fun introduction to VR when it isn’t frustrating due to the Oculus Go’s touchpad movement. Moving in VR can be cumbersome with the spotty touchpad response and is very frustrating during more difficult moments.

Are you seeing what I’m seeing?

Visually, Covert is pretty top notch on the Oculus GO. The textures are solid, I experienced no frame loss (thus, no motion sickness), and the effects are good. The mobile player has a very different experience from the VR player, but the interface is nice to look at and responsive. Both players get to experience the voice acting, which is pretty great. Sound design beyond that is different for each, but still high quality.

Some of Covert’s design functions around experiences that don’t require verbal communication between the VR player and the mobile player. Those are the game at its best, because it opens the game up to something beyond local gameplay. There’s an option for the hacker to ping a spot to bring to the agent’s attention and an expansion of design ideas like that could have opened Covert up to more. In its current form, though, there are segments where Agents will have to relay things like model numbers out to the other player that’s in the room. You can totally set up a call in ways outside of the game, it just would have been nice to speak to a player on the other side of the world somehow.

Virtual reality HMDs are more accessible than they have ever been, but the adoption rate still has a long way to go. Developers and engineers will have to approach creation on the immersive platform with that in mind and Covert is something other developers can look toward. Having an assymetrical experience like Covert allows VR players to engage more with non-VR players without feeling too isolated.

The concept is engaging and the game is fun occasionally, but input on the VR end is lacking. Playing on the mobile side is well done and the interface is attractive, but using the Oculus Go’s touchpad for movement is rough. In more difficult areas, that results in frustration for both players and hurts the experience overall. Ultimately, it feels like a secret spy experience with ambitions that want to spread its wings but the Oculus Go won’t let it get completely off the ground.

This review is based on an Oculus Go code provided by the game’s publisher. Covert is available now for $9.99 and can be played on Oculus Go and Samsung Gear. The mobile app Covert Companion is free on Android and iOS devices.