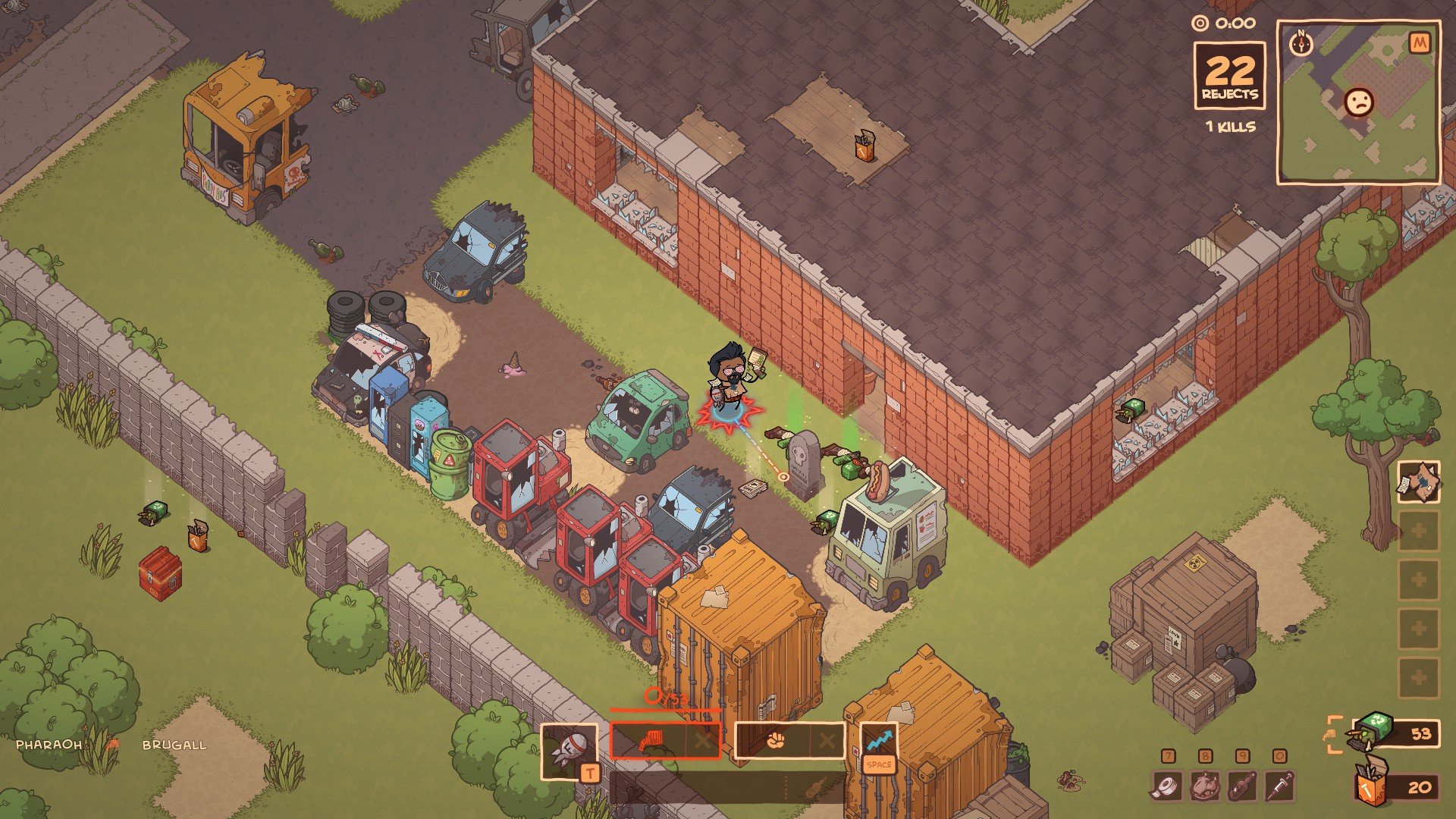 Rapture Rejects is a new Battle Royale game made in collaboration with the teams at tinyBuild, Galvanic Games, and Explosm. Based on the world of Cyanide & Happiness, a panel based web comic that's known for its extremely dark and sometimes controversial sense of humor, Rapture Rejects is set in a post-apocalyptic world. Following the Rapture, the only people left on Earth are the ones who weren’t good enough to accompany God back to heaven. You and the other unholy ones are left with one option: a scrappy fight to the death to prove your worthiness to the God above in hopes to secure your spot in Heaven. This zany backstory sets the stage for what is a hilarious, yet fine-tuned battle royale experience.

On its surface, Rapture Rejects looks like a game with the sole purpose of mocking the Battle Royale craze, and to take shots at some of the biggest players in the genre (PlayerUnknown’s Battlegrounds and Fortnite). While the game succeeds at doing this, it also serves as a very unique spin on the genre. It provided me with ample laughs, but at the same time impressed me with how well designed and balanced the gameplay was. In trying to play the Battle Royale format for comedic effect, Rapture Rejects inadvertently proves itself to be a fresh and accessible installment in the genre everybody wants a slice of.

Rapture Rejects gave me a dose of heavy nostalgia for the Adobe Flash games I would play on websites like Addicting Games when I was younger, and I mean that in the best way possible. It’s played from a top down isometric style. In addition, it has a very Adult Swim reminiscent cartoon-like art style that obviously draws inspiration from the web comics it was based on.

In practically every way, the gameplay in Rapture Rejects is scaled down quite a bit in comparison to other notable games in the genre. Most matches consist of no more than 30 players, with some starting off with as low as 15 survivors duking it out. This wasn’t a big issue for me as the games still moved with a solid pace, and I feel as though bumping up the player count on a smaller sized map like this one would take Rapture Reject’s sense of all-out chaos to a level where things would just be out of control and not fun for anybody. The map is fairly small, which wouldn’t be an issue if it wasn’t all just one consistent biome. The entire map is limited to one suburban area. Having at least two or three different environments for players to explore would really aid in mixing up the gameplay and would add another layer of strategy.

As of now, Rapture Rejects only has two game modes: Solo’s and Duo’s. There are no squad mode or alternative playlists of game modes to be had at this time. This is understandable as a squad mode in a world of this size would make for some pretty drawn out and awkward gameplay. Something that I immediately noticed when playing Rapture Rejects was the absence of a “drop in” feature. In typical battle royale games, there is some sort of device used so that players can determine where they’ll start off on a survival map. Rather it be an airplane, a battle bus, or a convoy of helicopters, This is a small yet vital detail in the last man standing game mode. Something is lost when your spawn point is just randomized upon the beginning of every match. It makes Rapture Rejects feel like a bite-sized battle royale.

Something I really appreciate about Rapture Rejects is the moment to moment gameplay. A full match takes no more than 10 minutes, and there’s rarely ever a long drag in gameplay where there’s nothing going on. The looting system is well balanced and impressively detailed. There’s short, medium, and long range weapons. A medium range weapon like the gumballer is ideal for tagging foes from a medium distance, while the toaster knife shooter can make quick work of enemies when used in close-quarters. There are only two main weapon slots, forcing players to be cautious of what they take into battle. I constantly found myself mixing and matching until i found two items that complimented each other the best.

There’s one utility spot reserved for the special items scattered throughout the map. Each of the utilities having different uses, some offensive, some defensive, and others passive. For example, the liquid nitro trap would slow down enemies in a confined space, making them an easy target. My favorite Utility to use however was the disguise. Although a little gimmicky, it was fun hiding around in plain sight as simple objects like a chair or filing cabinet, waiting to pop out on unsuspecting rejects.

As previously mentioned, Rapture Rejects’ charm is in the way it leans into the dark humor of Cyanide & Happiness. The world is designed in a way that takes advantage of the comedic web comic and gives it a sense of uniqueness. This is particularly evident in the assortment of weapons and utilities available. Items like the F-bomb and reverse pencil sharpener gave me quite a good laugh. Having a bomb that upon detonation, plays a thunderously loud bleep sound as if censoring somebody shouting curse words never got old.

The customization is about as solid as can be for a 2D game with hand drawn style characters: you can mix and match colors, pick from a decent variety of hairstyles, and add private parts like a dong or a pair of boobs to your character for whimsical effect. Rapture Rejects features a spin the wheel system called Sinners and Winners. Throughout their gameplay, players will receive tickets for each game completed. This can range from 3 or 4 to more than 10 depending on how well one performs during a match.

Once you’ve acquired 100, you can spin the wheel at Sinners and Winners to unlock a random cosmetic item for your character. Collecting tickets is a nice thing to pay attention to on the side, and it’s always a pleasant surprise to see that I happen to have enough to take a crack at the wheel. The system may not be as intricate as some players hope, but it fits in perfectly with the game around it. If it remains as is, Sinners & Winners is a harmless and neat way to collect cosmetics to wear out on the battlefield.

Rapture Rejects is an enjoyable spin on the Battle Royale craze that feels better than it has any right to be. Its sense of humor and awareness helps to set it apart from the mountain of other titles vying to get a slice of the pie. Finely tuned gameplay make for legitimate last man standing experience that’s hard to put down at times. Its bite sized sense of scale and depth make it accessible to a large number of audiences. With a solid foundation of humor and gameplay Rapture Rejects really has the opportunity to build upon something special here.

This review is based on a PC digital code provided by the publisher. Rapture Rejects is available now on Steam for $19.99.

Disc Room review: The sheer discrespect of it all!