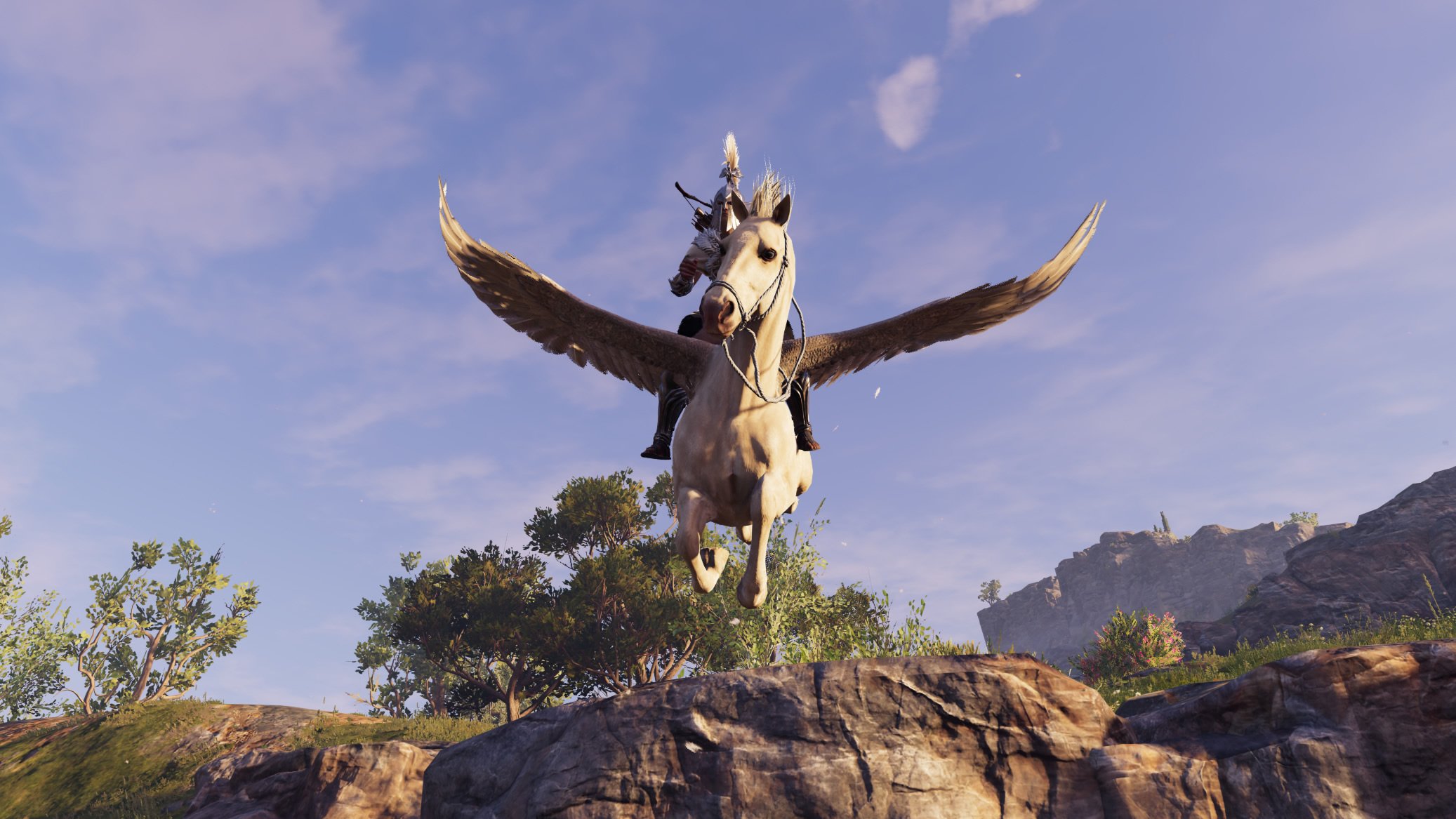 How to get Phobos Pegasus and Unicorn skins - Assassin's Creed Odyssey

Climb upon ye faithful steed — it's time to ride in style around Ancient Greece. Assassin's Creed Odyssey players looking to mount up in glorious mythological fashion shouldn't settle for any old horse — nay, they need to showcase their prowess by tracking down the steeds of legend. Fortunately, the team at Ubisoft have provided just what heroes need in the form of the Black Unicorn, Rainbow Unicorn, and Pegasus horse skins. Here's how to unlock them.

How to unlock Unicorn skins in Assassin's Creed Odyssey

Here's a familiar situation: you're sitting on top of your horse Phobos, riding around and completing treasure hunts for Xenia, perhaps, but no one seems to be particularly impressed with your equine transportation. The solution is simple: turn Phobos into a Unicorn. Even better, the process couldn't be any more simple: all palyers need is some Drachmae to spare. 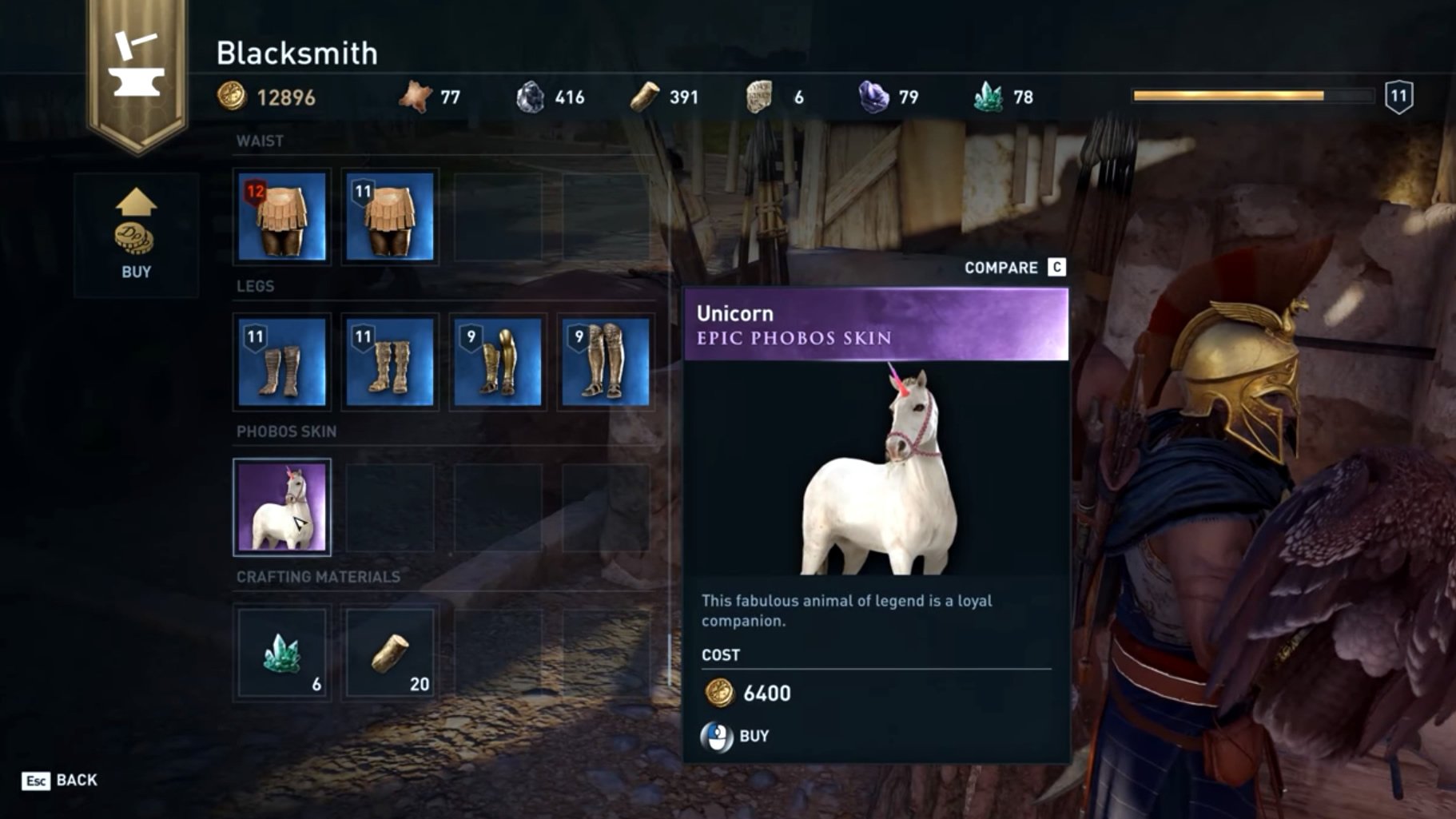 The epic Unicorn skin can be purchased from the Blacksmith for a mere 8,000 Drachmae, and players with the Tier 8 Mercenary discount can have that price reduced to just 6,400 Drachmae. In typical legendary fashion, the Rainbow Unicorn epic skin leaves a trail of magic, color, and whimsy behind everywhere it runs. The only catch is that the skin isn't always availably, so be sure to stop by the Blacksmith frequently.

The Black Unicorn skin, on the other hand, is now sold exclusively through the Helix Store. Initially offered as a pre-order bonus through Gamestop, the Black Unicorn skin is available for 500 Helix Credits. The skin itself features a black horse with a silver horn, with hooves that leave behind a trail of pure white light.

How to unlock the Pegasus skin in Assassin's Creed Odyssey

Mythological though they may be, perhaps unicorns just don't do it for you. If that's the case, heroes who desire a mount more deeply steeped in the Greek legends will be more interested in tracking down the Pegasus skin, a virtual representation of the winged steed of classic Greek mythology.

As represented in the Greek myths, the Pegasus skin in Assassin's Creed Odyssey showcases a magnificent white horse with massive feathered wings. Granted, the wings won't actually allow Odyssey players to fly, but it is light enough on its hooves that players riding it won't take any fall damage. 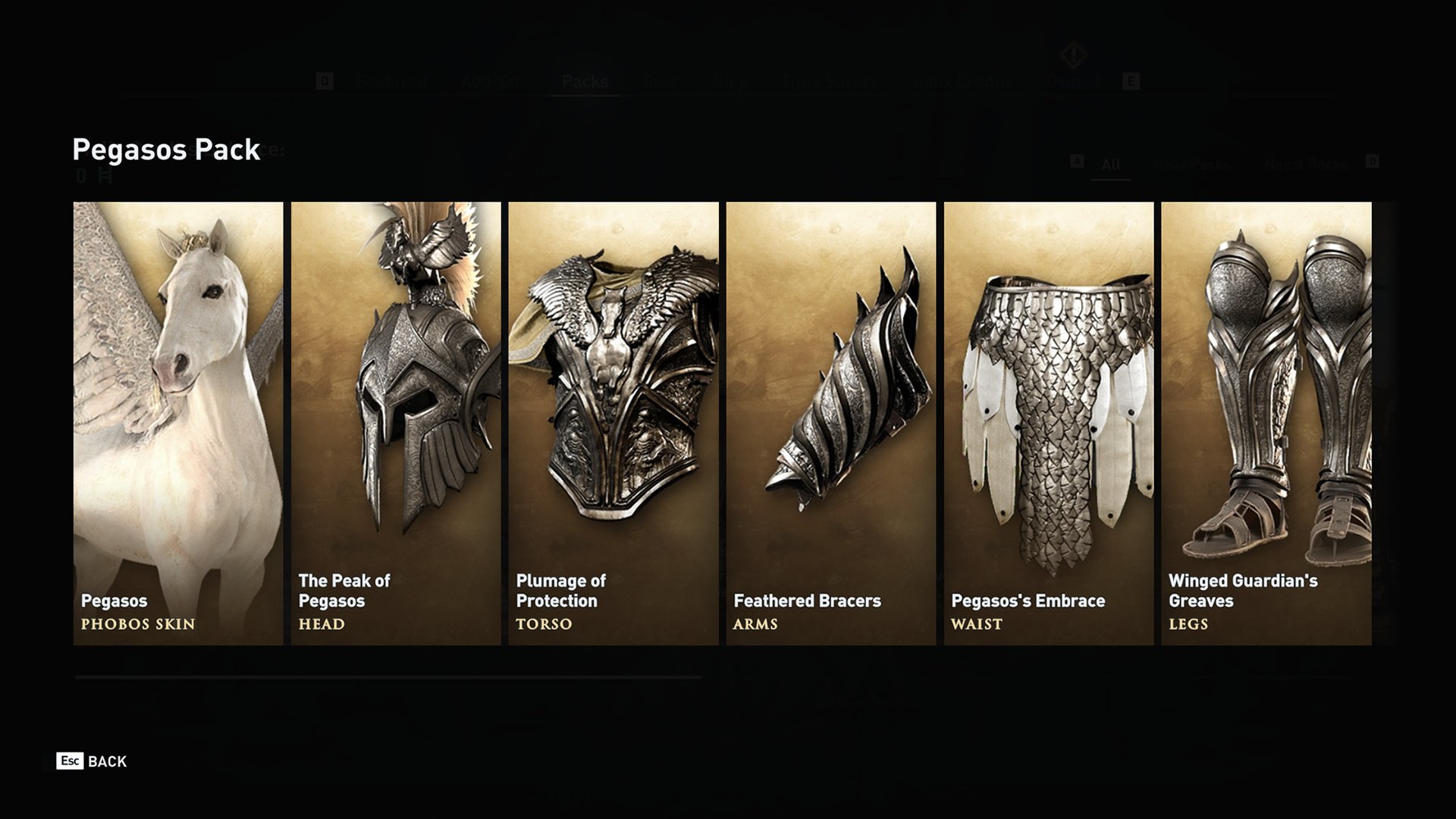 As with the Black Unicorn skin, the Pegasus skin is available exclusively through the Helix Store, and is sold for 750 Helix Credits. To complete the look, players can also purchase the Pegasos Pack for 1,500 Helix Credits, which includes not only the Pegasus skin for Phobos, but also the Peak of Pegasus helmet, the Plumage of Protection armor, the Feathered Bracers, Pegasus' Embrace, and the Winged Guardian's Greaves. And, in the case that spending real-world cash isn't exactly ideal, heroes also have a chance to purchase the Pegasus gear through Oikos of the Olympians for Orihalcum Ore, though it may be hard to track down considering that Oikos' inventory is rotated frequently.

Given proper time and proper credits, players should have no issue finding a Pegasus or Unicorn skin for Phobos that properly conveys their legendary status. To learn more about Ubisoft's new Ancient Greek adventure, be sure to stop by Shacknews' Assassin's Creed Odyssey walkthrough and guide, which is stuffed to the brim with Cult of Kosmos guides, Ainigmata Ostraka locations, and much more.