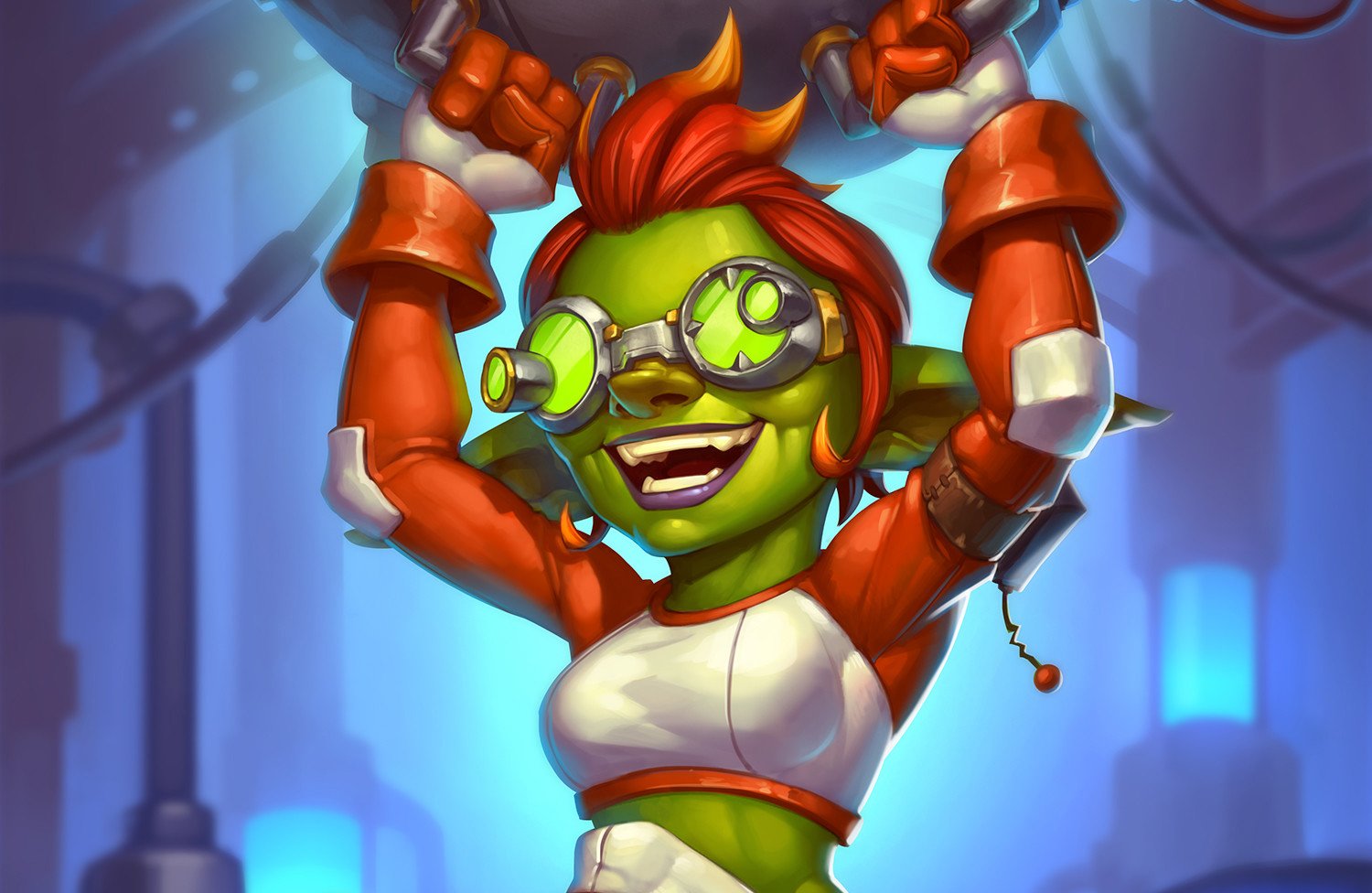 Analysis: This is a fascinating card that probably won't fit in a lot of constructed decks, just because of its 3/4 body. A 6-Cost for a 3/4 isn't particularly great on the Ranked ladder.

Arena players may want to give this guy a peek, especially Mages. Finding a board-clearing Meteor or Flamestrike could swing a game. The trouble is, because Arcane Dynamo costs 6 Mana, players won't really be able to play that big spell on the same turn.

Analysis: A decent effect, but that's a truly awful stat line. Look at comparable minions like Dragonslayer or Hemet Nesingwary. By comparison, 3/3 stats on a 5-drop is really bad.

Don't look to see much of this minion in this new expansion. It's not good.

Analysis: Here's another awful 3/3 stat line and it's on an even more expensive minion. The difference is, Meteorologist has a much more intriguing effect.

As I discovered in the last expansion, Elemental Mages can pack surprisingly big hands and that means Meteorologist can do some heavy damage. Other Mage players packing Aluneth should also have an easy time keeping their hands packed. Meteorologist has the potential to do more damage than people might think. It could be a dark horse for this expansion and might be one of the Mage's best cards.

Analysis: The Omega Mind isn't a minion that you're going to playing on Turn 2. It's the minion that save any Shaman player in a late-game pinch.

Combine this with Volcano for a quick heal. Think of it as a much more affordable Hallazeal the Ascended. And since this healing effect comes off a Battlecry, it could handy in a Shudderwock deck.

Analysis: This is a fascinating new conundrum for Zoolock decks. The Void Analyst has a Deathrattle that will buff up all in-hand Demons. However, it costs 2 Mana, so that means having to dump Prince Keleseth.

Dumping the Prince is a lot to ask for, given what it can do when drawn on the opening hand. Void Analyst is something that could shine in future Standard metas, once the Prince rotates out. For now, it's not really going to work.

Analysis: Hey, look! It's a mini-Iron Juggernaut. And it's a Neutral!

What's funny is that Iron Juggernaut may have been ahead of its time, in terms of its effect. Seaforium Bomber actually works much better for today's Hearthstone game, where drawing cards is king. And with a solid 5/5 stat line for 5 Mana, it's a pretty good tempo card. Look at this as a hard counter for those pesky Miracle Rogue decks or for those Mecha'thun decks that are about to take the world by storm. This could be devastating in a Shudderwock deck, which could pack in repeated bombs and make drawing cards an active detriment for the opponent.

So Mages aren't particularly known for being minion-heavy. Elemental Mages could make some use out of this, but it's hard to picture anything else working with this spell. The other thing is that it's a 7-Mana play, which could be a lot to ask for. It's essentially ceding your Turn 7.

With all of that said, 1-Mana Archmage Antonidas with 1-Mana Sorcerer's Apprentices should not be ignored and has the potential to be very deadly in the late game. I wouldn't look for this to be a Mage player's first choice, but I wouldn't sleep on this, either.

Analysis: Here's an interesting new Legendary that could work in a variety of Secret decks. For Mages, it could be a solid substitute for Aluneth, though Secret Mage decks don't normally use 5 different Secrets.

Secret Hunter decks haven't really been a thing lately, but Subject 9's Beast synergy makes it worth at least looking at. This could be an intriguing partner for Professor Putricide. Wild Hunters will definitely want to look at Subject 9, since Cloaked Huntress will allow them to play all five of those Secrets simultaneously on the next turn.

This won't have too much of an impact now, but if Secret decks become a thing again down the road, Subject 9 will almost certainly become a staple.

Analysis: This looks like an interesting spin on the Priest's Coffin Crasher. The key difference is that while the Coffin Crasher dies, Dr. Morrigan will live endlessly for as long as there are minions in the Warlock's deck.

Given the minions that the Warlock keeps in its deck, this could be a nightmarish Deathrattle. It's going to be absolute murder in a Cubelock deck, with Carnivorous Cubes that can create multiple Dr. Morrigan minions, which can then swap with each other. And somewhere in that chaos, it can bring out Doomguard or Voidlord. This is a scary Legendary for Warlock players and one that could find a home in a lot of their decks.

Anaylsis: Uh-oh. This little guy is going to be trouble. In addition to discounting any variety of useful Mechs, it's also going to make Mecha'thun cheaper. That's going to mean pain for anyone playing against any of those decks.

For Druid players, it eliminates the need for Innervate to complete the killer Mecha'thun combo. It makes like easier for Warrior and Priest players, who both have their own spell triggers for Mecha'thun.

But most intriguing is that this suddenly opens the door for Shaman players to join the Mecha'thun party, since Galvanizer can be combined with Murmuring Elemental to discount Mecha'thun all the way down to 6 Mana. Even at 8 Mana, Shaman can trigger Mecha'thun with Zap! and Crushing Hand. Mecha'thun decks are going to run wild in the new meta and I'd expect to see Galvanizer in a lot of them.

Analysis: On the one hand, this looks like a very expensive spell. Can a Shaman player really pack enough minions on the board to make a 7-Mana play like this worthwhile?

The answer to that is yes, yes they can. Look beyond standard cheap minions like Fire Fly and Glacial Shard. Look at new cards like Voltaic Burst and Sparks generated from Thunderhead.

It doesn't take much work for the Shaman to fill the board and that makes The Storm Bringer into a potential high-value play.

Analysis: The jury's out on this Paladin spell, just because of the possibilities that it creates. Its effectiveness ultimately depends on the type of deck that the Paladin player is looking to put together. Maybe use this spell to score a cheap Tirion Fordring or a cheap Dinosize. How about trying to exploit this effect and use it to score some cheap Giants or swap an expensive spell's cost for a Happy Ghoul, which goes down to 0 after a heal anyway?

The Wild Murloc Paladin might be the biggest beneficiary of this spell, since it can draw Anyfin Can Happen for cheap. However, there will be instances where it swaps its Cost with a key Murloc card, which will be how players end up with a 10-Cost Old Murk-Eye.

Analysis: Here's a nice multi-use Mech for the Warrior. The idea is that Mech Warriors will want to pack this guy in at the 5-slot and use its Battlecry to fire away on enemy minions. It's certainly a good use for it, especially in a Dr. Boom deck. Having that Battlecry along with Dr. Boom's Rush effect will come in very handy.

The thinking man's Warrior will want to also use this to buff up their enrage minions like Grommash Hellscream and get some big-time face action going.

That's all for now! We're all caught up! The final batch of card reveals is set to release later this morning at 10AM PT. Once all of those cards are up, Shacknews will be back with a Lightning Round analysis to wrap up this expansion. Keep an eye on our continuing analysis of The Boomsday Project, as we march towards the expansion's release on August 7.