All Abilities in Vampyr

Being an immortal, blood-sucking beast of the night is a lot of tough work, which is why Vampyr offers a whole array of abilities to help become the best vampire in the city. Before setting out to help (or hinder) the citizens of London, become acquainted with all the abilities in Vampyr. 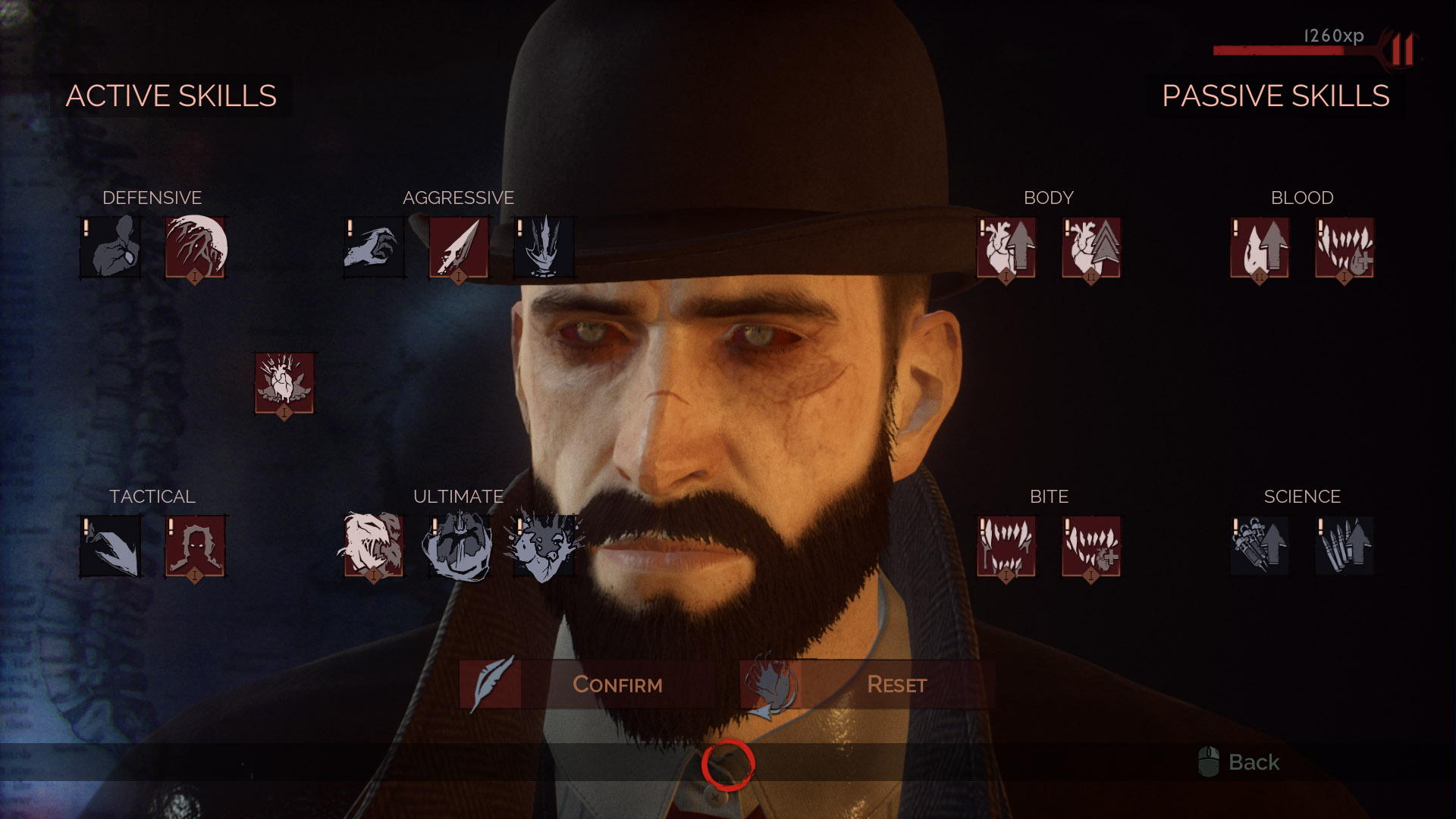 When dealing with active abilities, only four can be selected at a given time, so choosing the best ability for a situation is essential to overcoming some of the more challenging enemies in the game. Because evolving abilities is expensive, make sure you know how to earn more experience points so you can get all the tasty abilities. 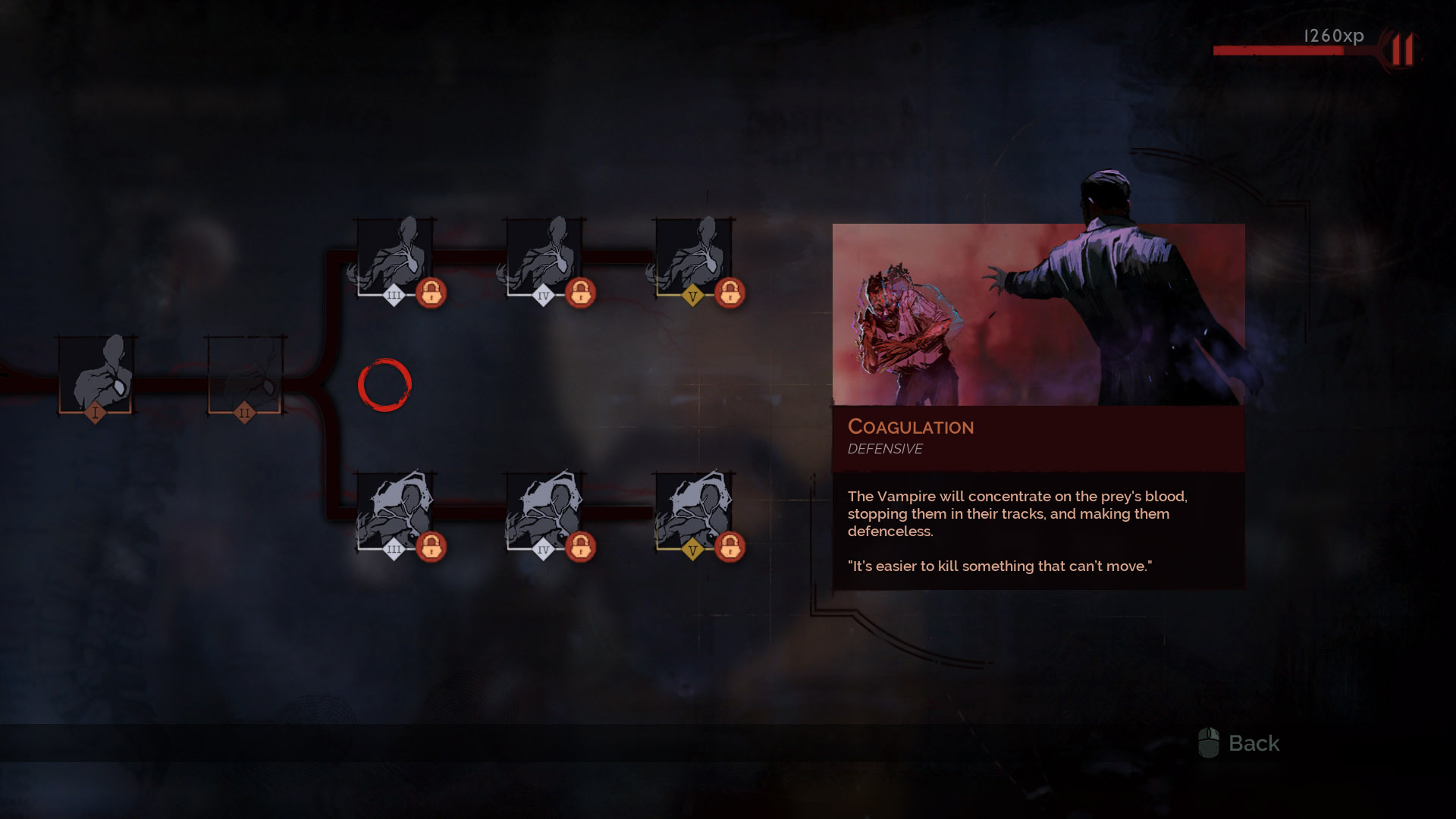 Coagulation – Block your target’s blood in their veins, making them defenceless.

Coagulation is an exceptionally strong ability that freezes an enemy in its tracks. This allows for more opportunities to reposition or heal when in danger. The ability forks at level 3, either increasing the time the enemy is frozen or makes their blood explode from their body and feed into your own blood supply. 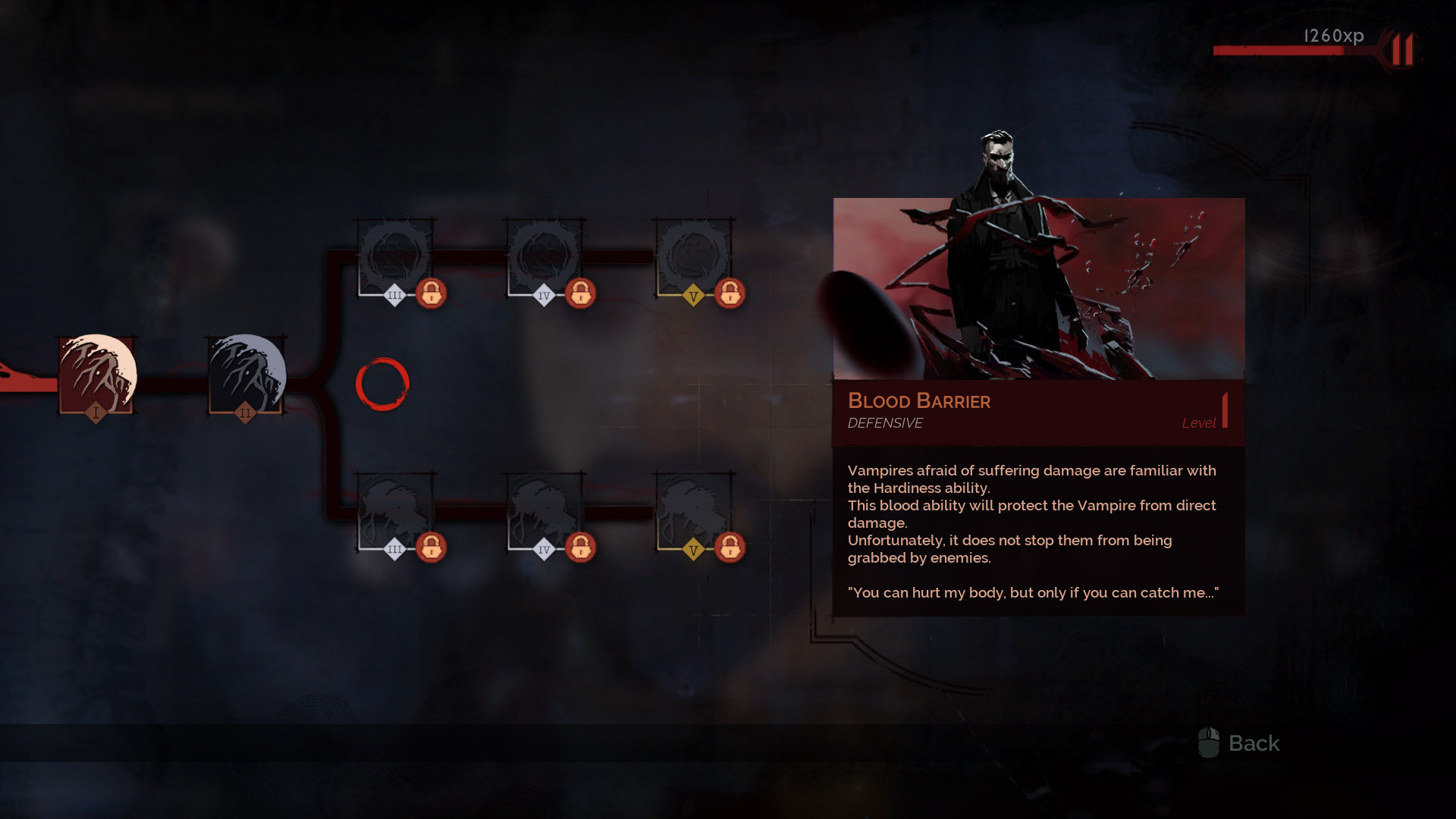 Blood Barrier – You create an invisible barrier, absorbing direct damage until it fades, or is destroyed.

Blood Barrier grants a temporary ring of protection made of blood that dissipates after a short time or when it is destroyed. At level 3 the ability is split into two distinct paths, one that increases the amount of hits it can absorb and its duration or a path that creates an explosion of damage when the shield is broken. 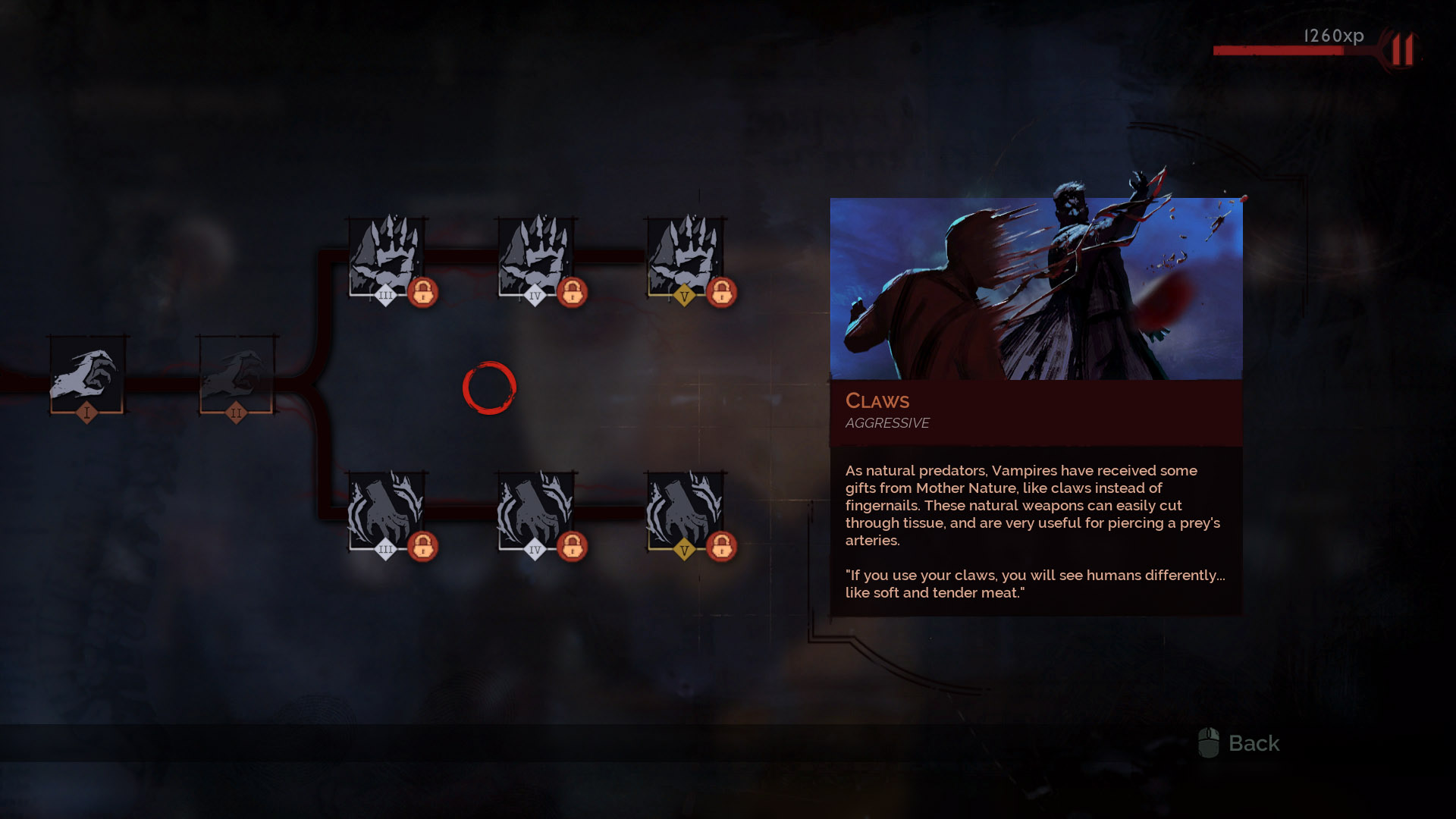 Claws – A close-range strike that will cut through all living creates in front of you.

Claws offer an excellent alternative to the melee weapons in Vampyr, though with the added cost of using blood. For the base levels, Claws deals high levels of damage, and at level 3, splits into two paths. The top route grants blood on successful hits while the bottom path adds a stun effect. 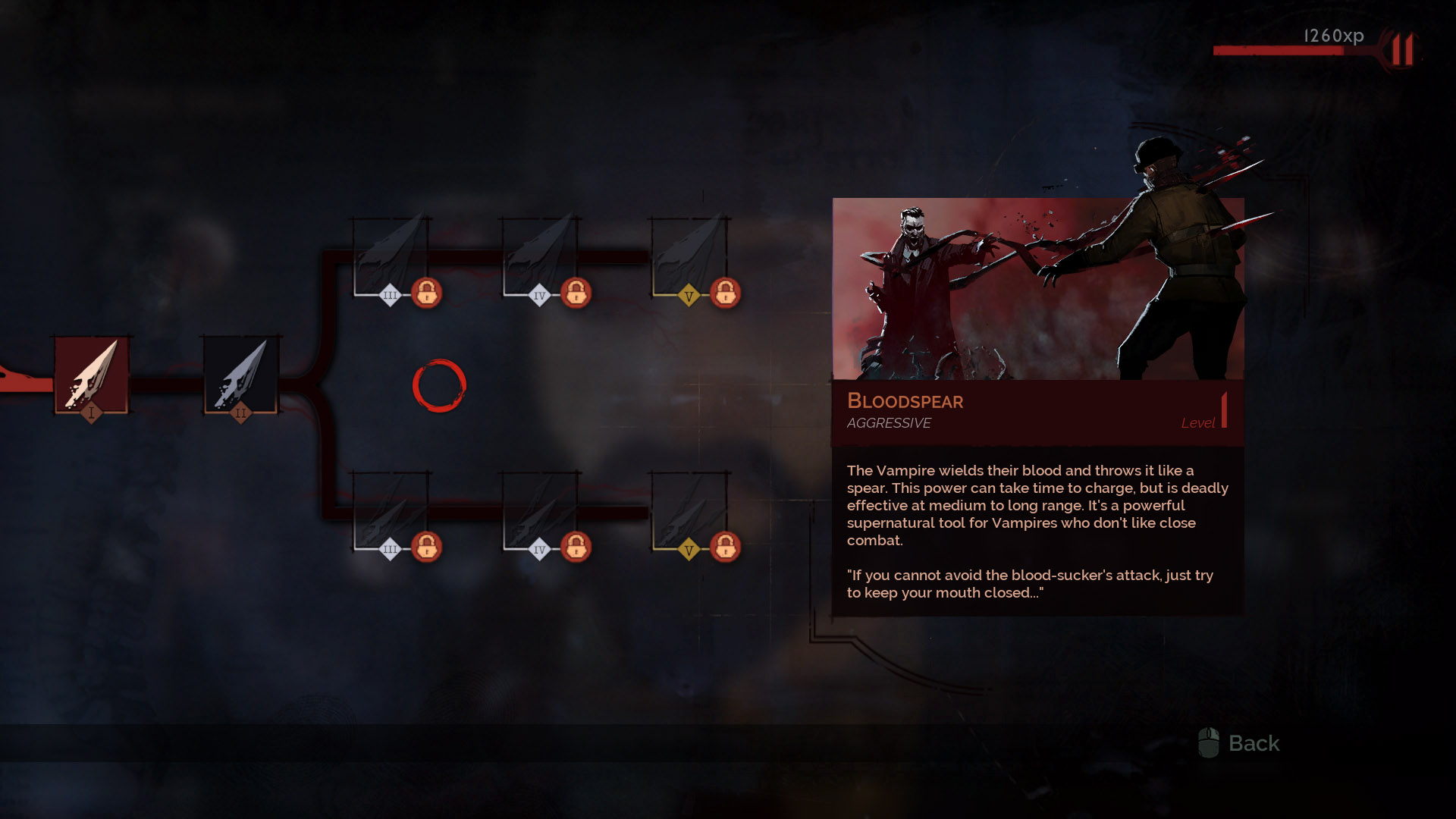 Bloodspear – You throw a spear made of blood, which can pass through enemies in front of you.

Bloodspear is the perfect options for vampires who prefer to utilize ranged combat. The advantage of Bloodspear is that, when positioned correctly, it can pass through multiple enemies in one hit. At level 3, Bloodspear splits into two distinct paths: throw a larger projectile that deals more damage or throw more spears though at reduced range and damage. 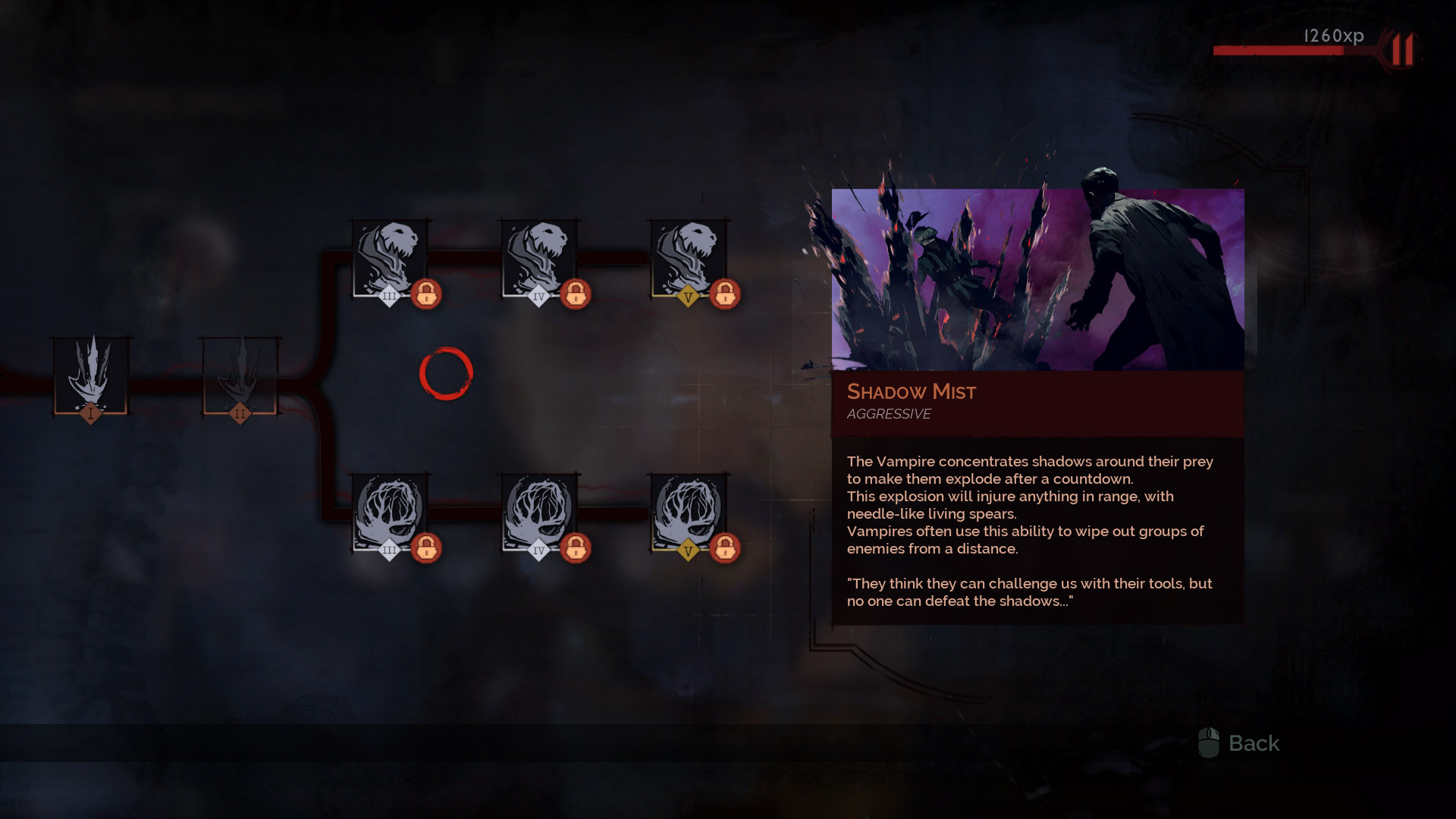 Shadow Mist – Place a cloud of shadows at the target’s feet, or yours. The cloud will explode after a short time causing heavy damage.

Shadow Mist is best used before openly aggressing an enemy, as it has a slight delay before exploding. A decision must be made at level 3 as to how to the skill should evolve. The top path offers increased range and damage while the bottom path creates continuous shadow attacks that feed the vampire blood. 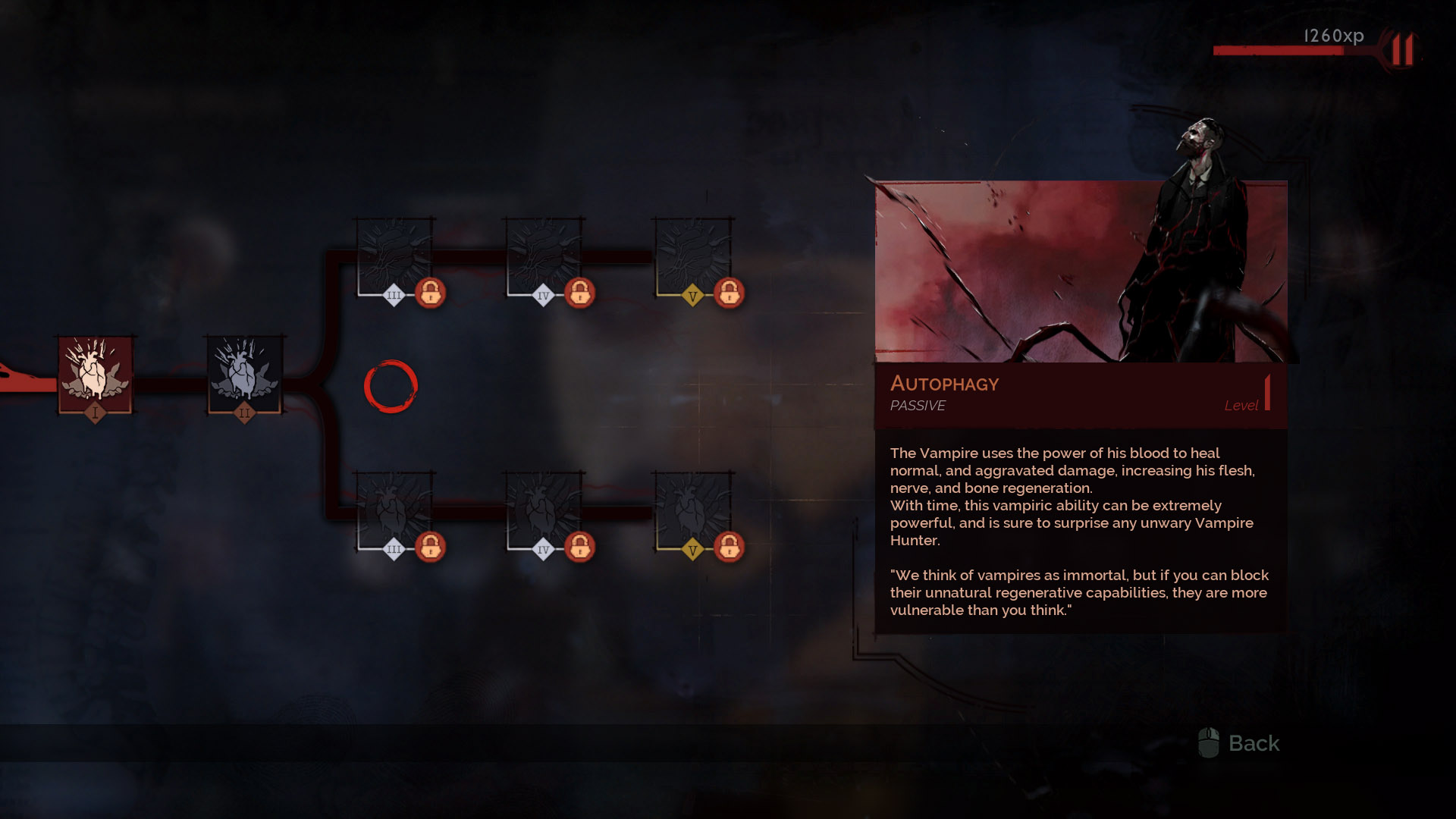 Autophagy – You drain your own blood to heal normal and aggravated damage instantly. 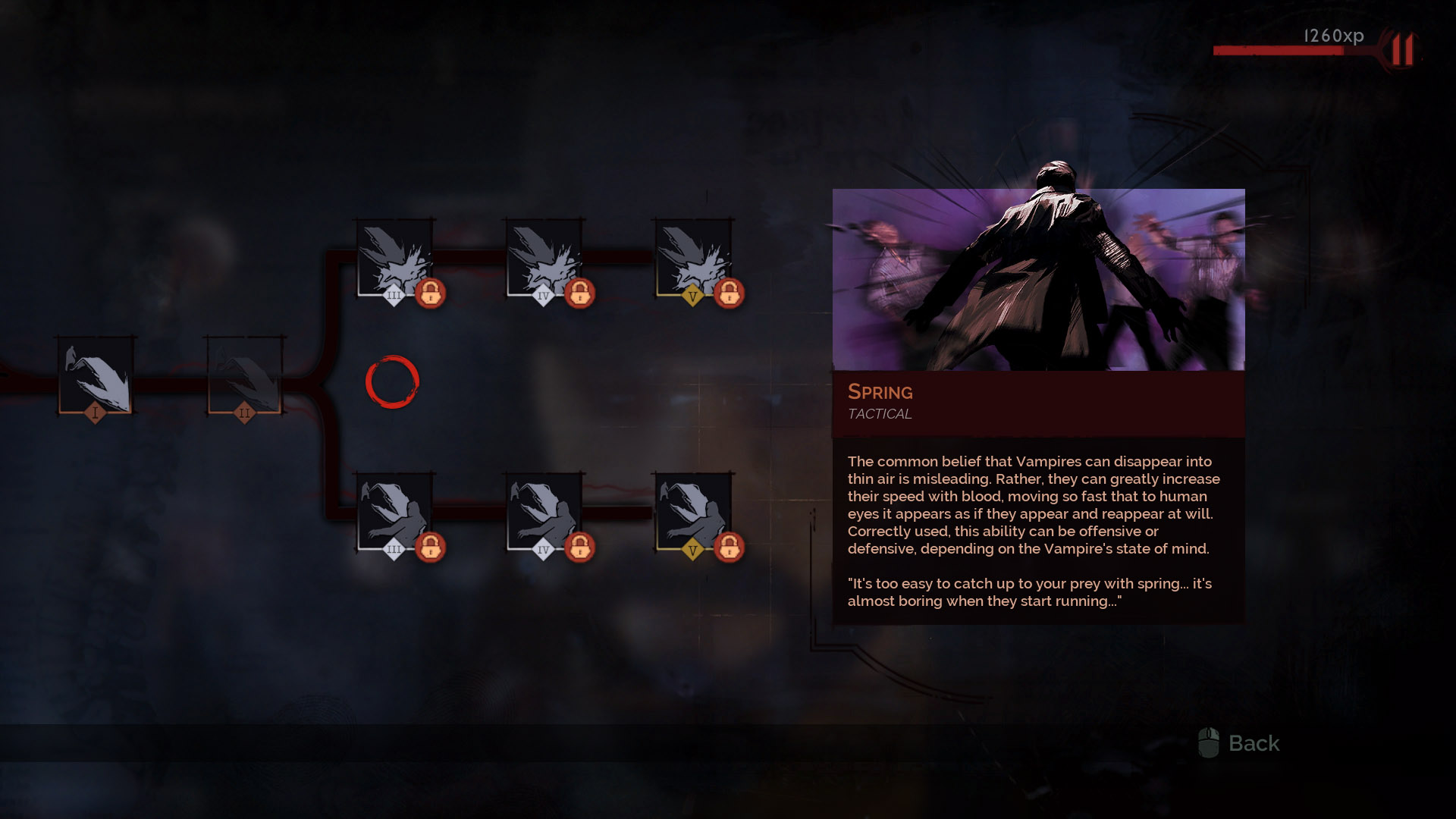 Spring – You perform a supernatural move to your target, and cause damage upon landing.

Spring sends the player leaping onto an enemy target, a great means of beginning a fight. The top evolution path of Spring increases the damage the ability deals to the target and also deals damage in an area around the vampire while the bottom path increase the damage, and if the target is already stunned, the vampire will bite the target automatically. 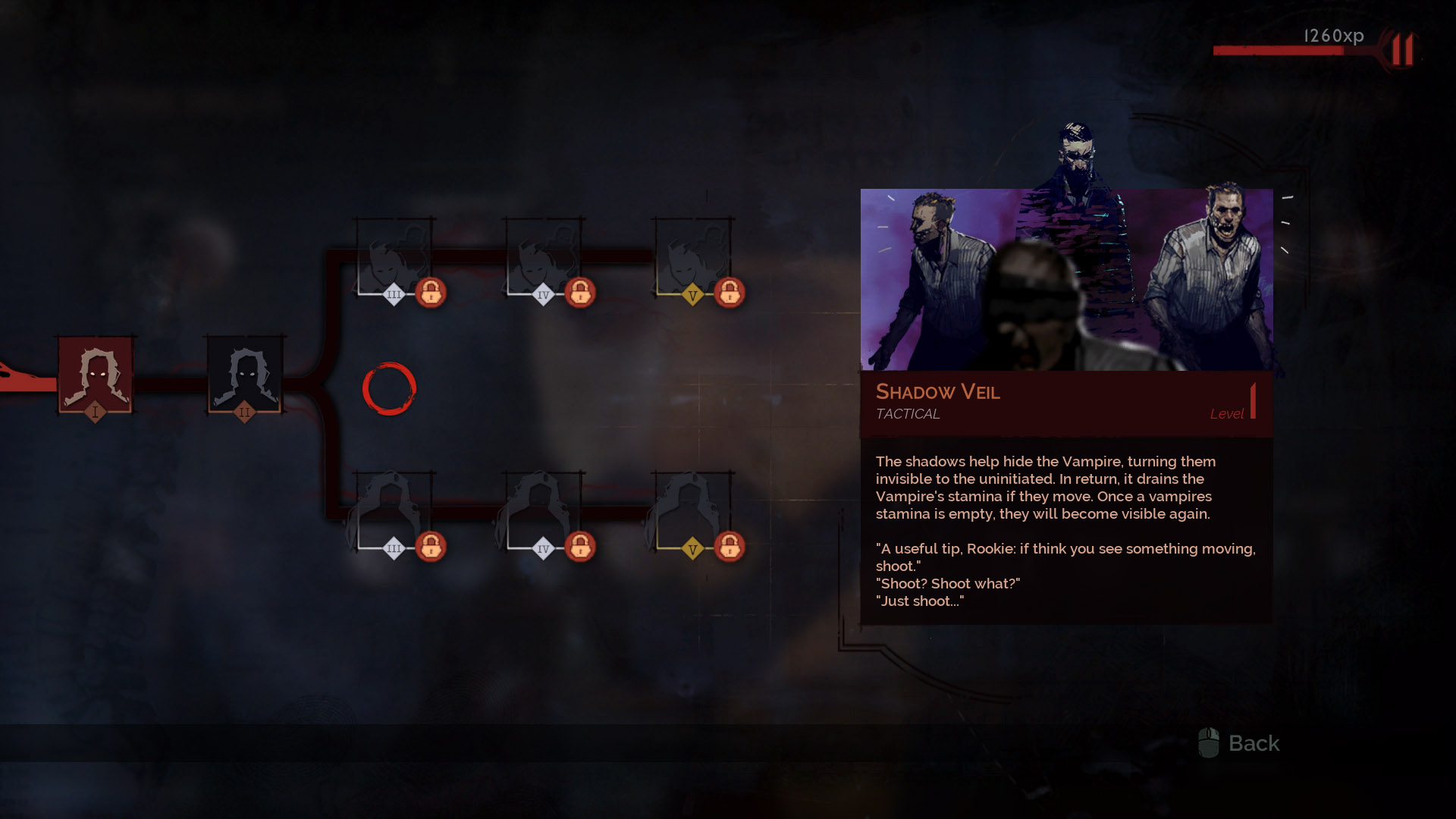 Shadow Veil – Drain your stamina to fade into shadows and become invisible to most enemies. Moving in this state will drain more stamina. You will exit the shadows if you attack, dodge, or when your stamina is empty.

Shadow Veil is predominantly used to move past enemies unnoticed, an excellent tool for getting to hard-to-reach places surrounded by high-level enemies. The top path grants increase damage and stun upon leaving the shadows. The lower path of the Shadow Veil skill allows the vampire to dodge while walking in the shadows, while also lowering the per-second stamina cost.

All of the ultimate skills simply increase their specific damage type whenever they are evolved. 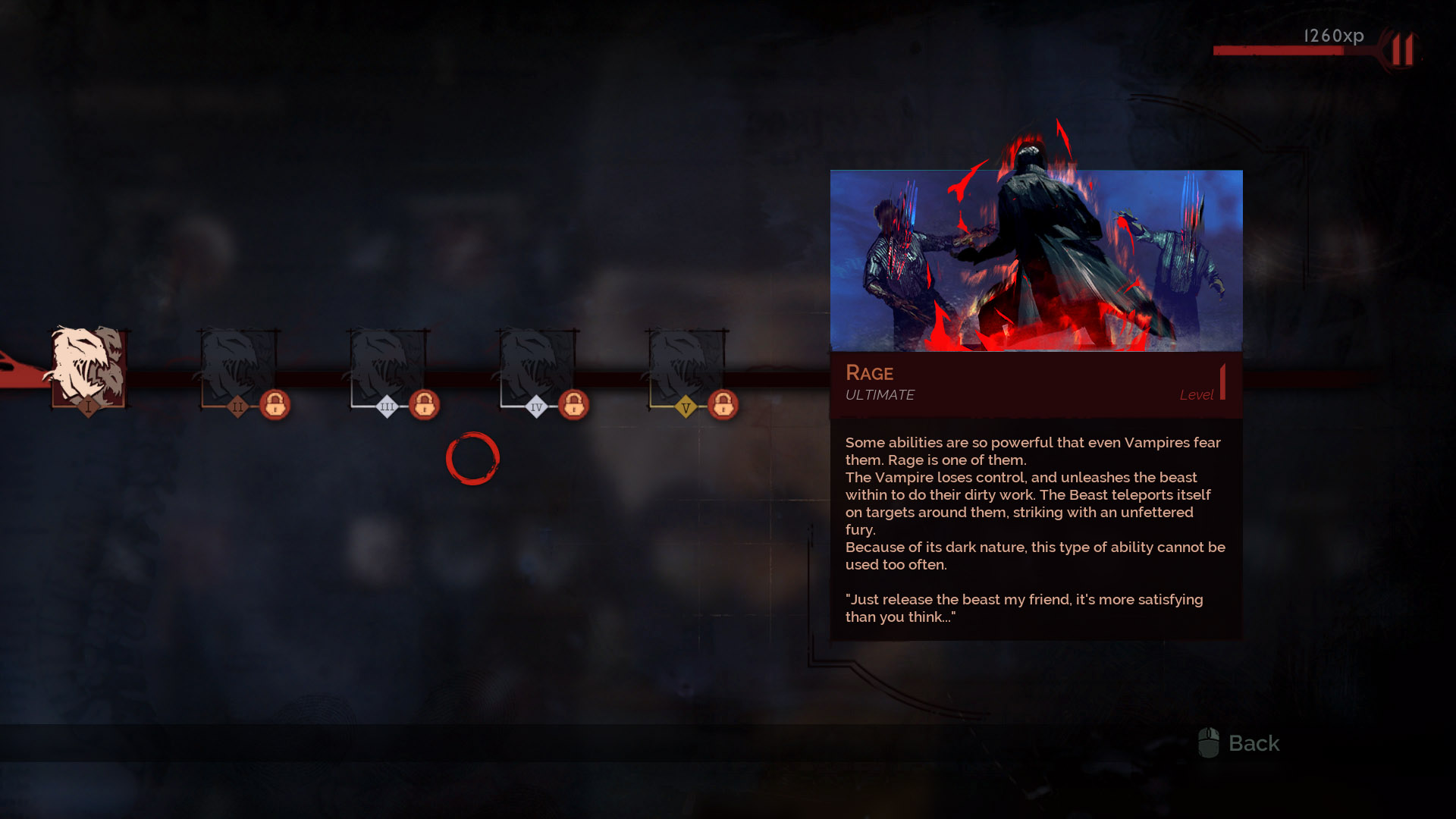 Rage – You lose control, and let the Beast take over for a short time. The Beast teleports itself to all enemies around you, and strikes them with furious blows. 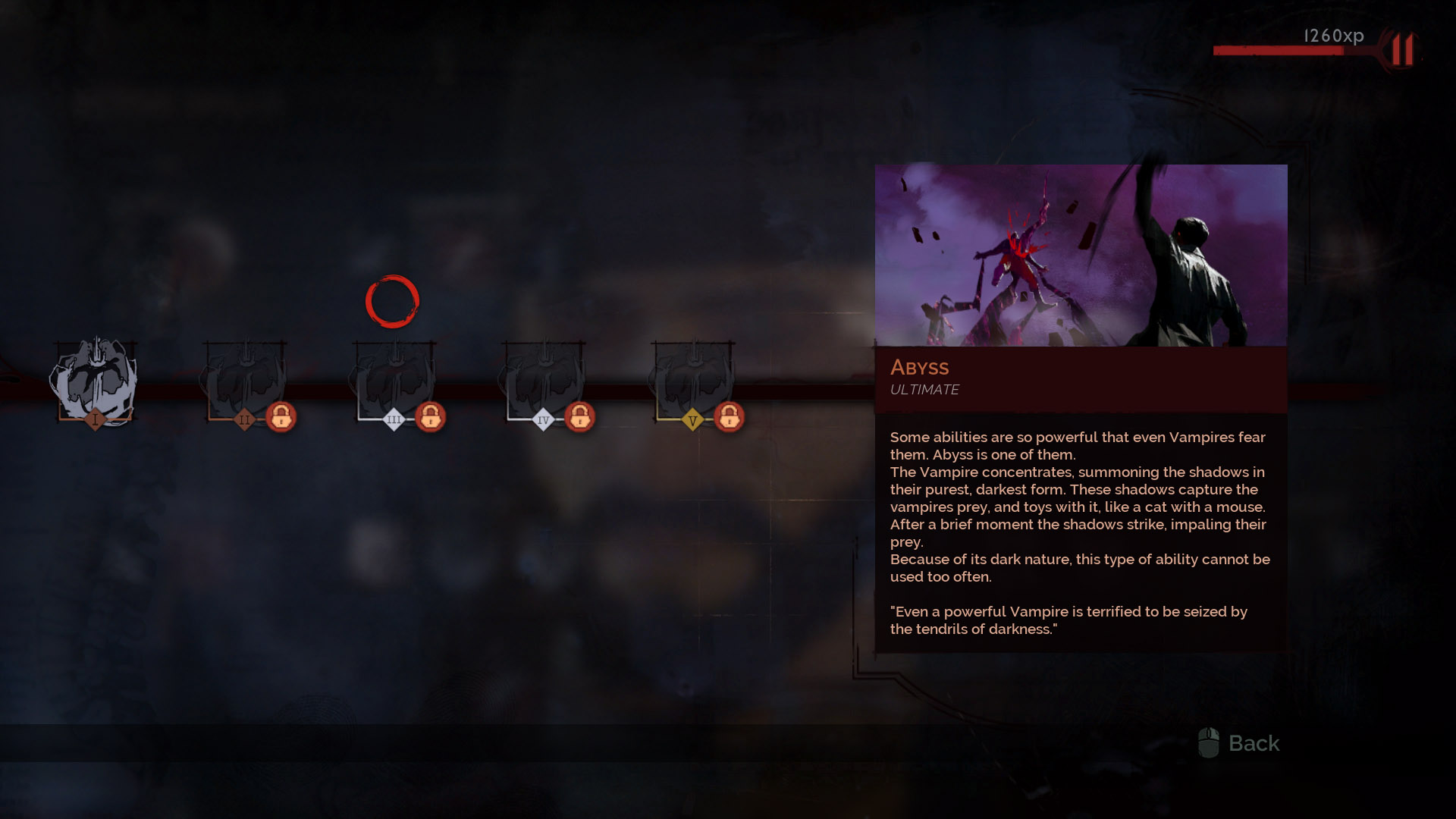 Abyss – You create a Shadow vortex at your target’s feet. Coming to life, the Shadows interrupt an enemy in the area and inflict tremendous damage. 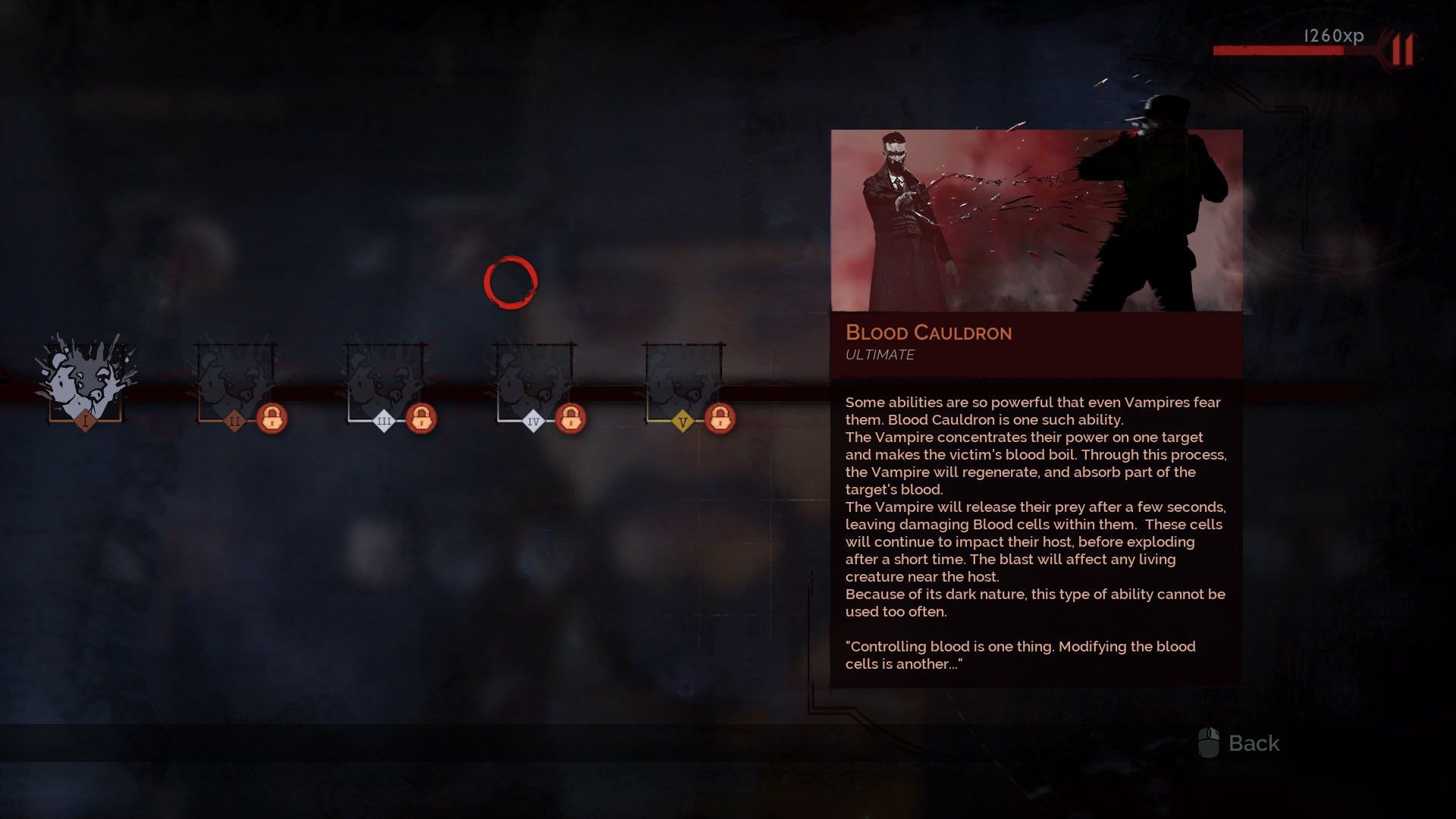 Blood Cauldron – You focus your power to boil the target’s blood, causing it to violently explode, dealing damage to the target and anything nearby. 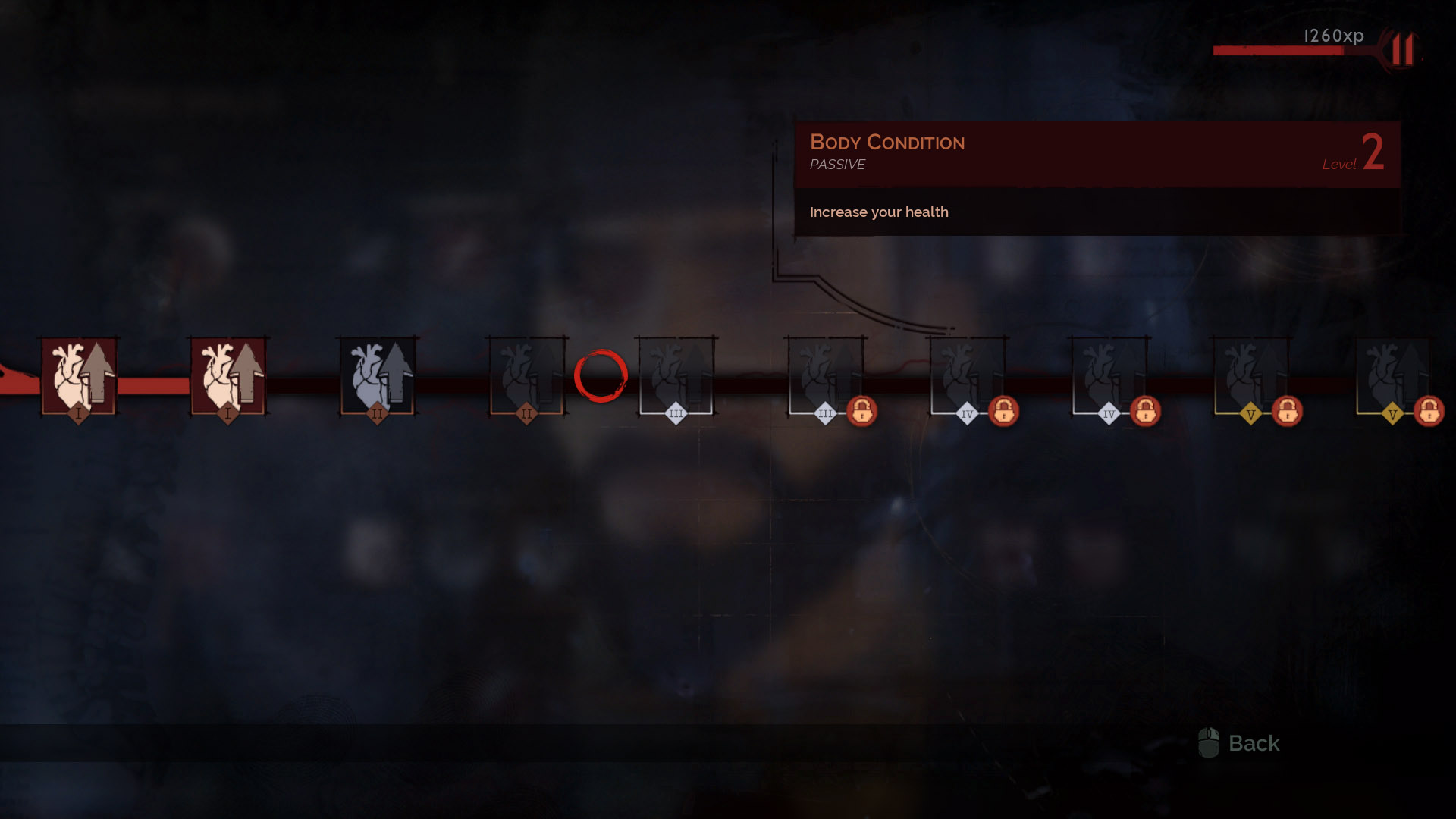 The body passive skills focus on the amount of damage Dr Reid is able to take as well as the amount he can attack before depleting his stamina. 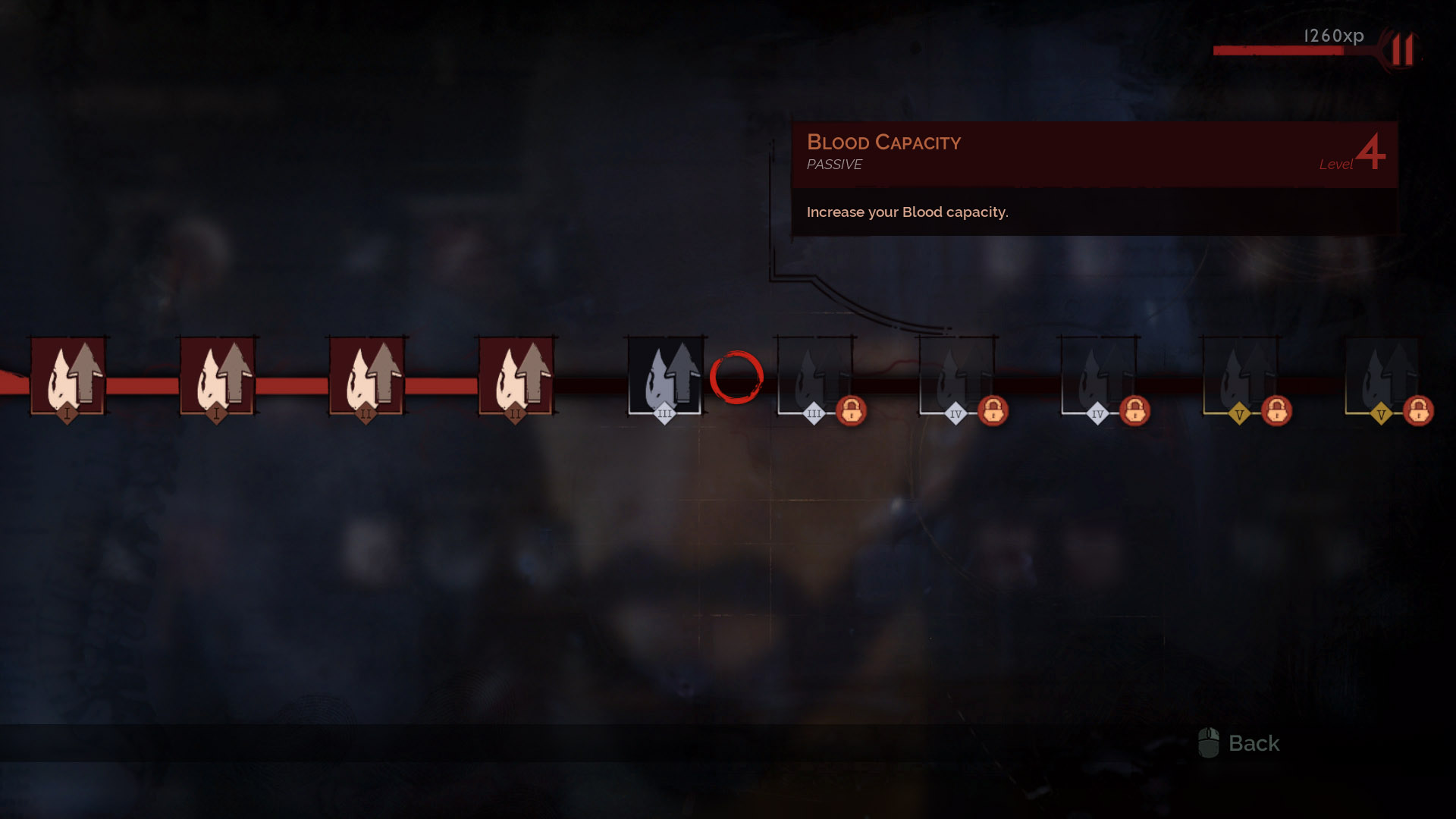 The blood passive skill focuses on the amount of blood Dr Reid has available to use. Upgrading this is essential if your playstyle leans toward favoring blood attacks as opposed to melee weapons and guns. 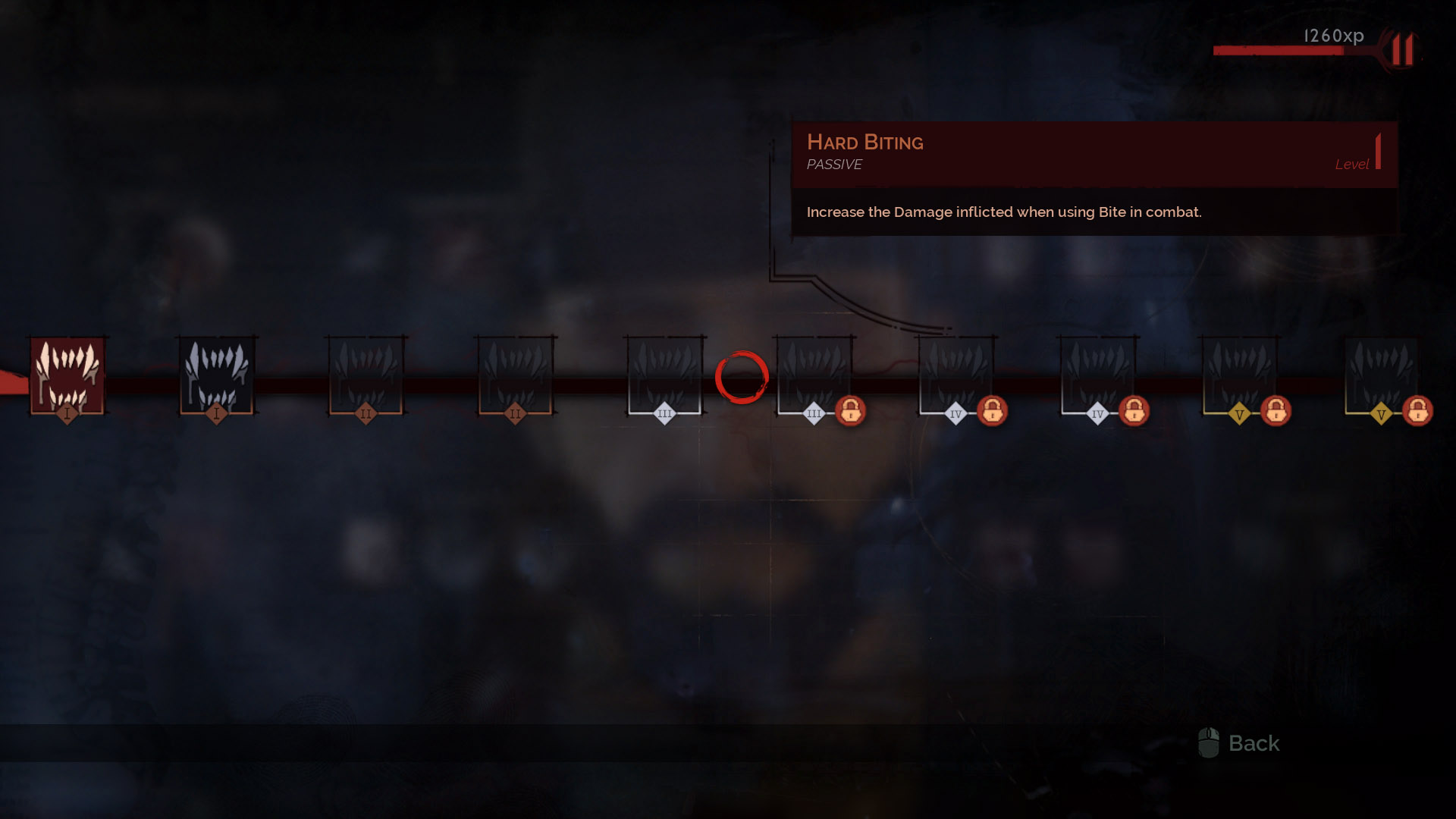 A vampire’s bite is its greatest tool, and the same holds true in Vampyr. Upgrading the bite ability improves its damage and increases the regenerative properties of Dr Reid. 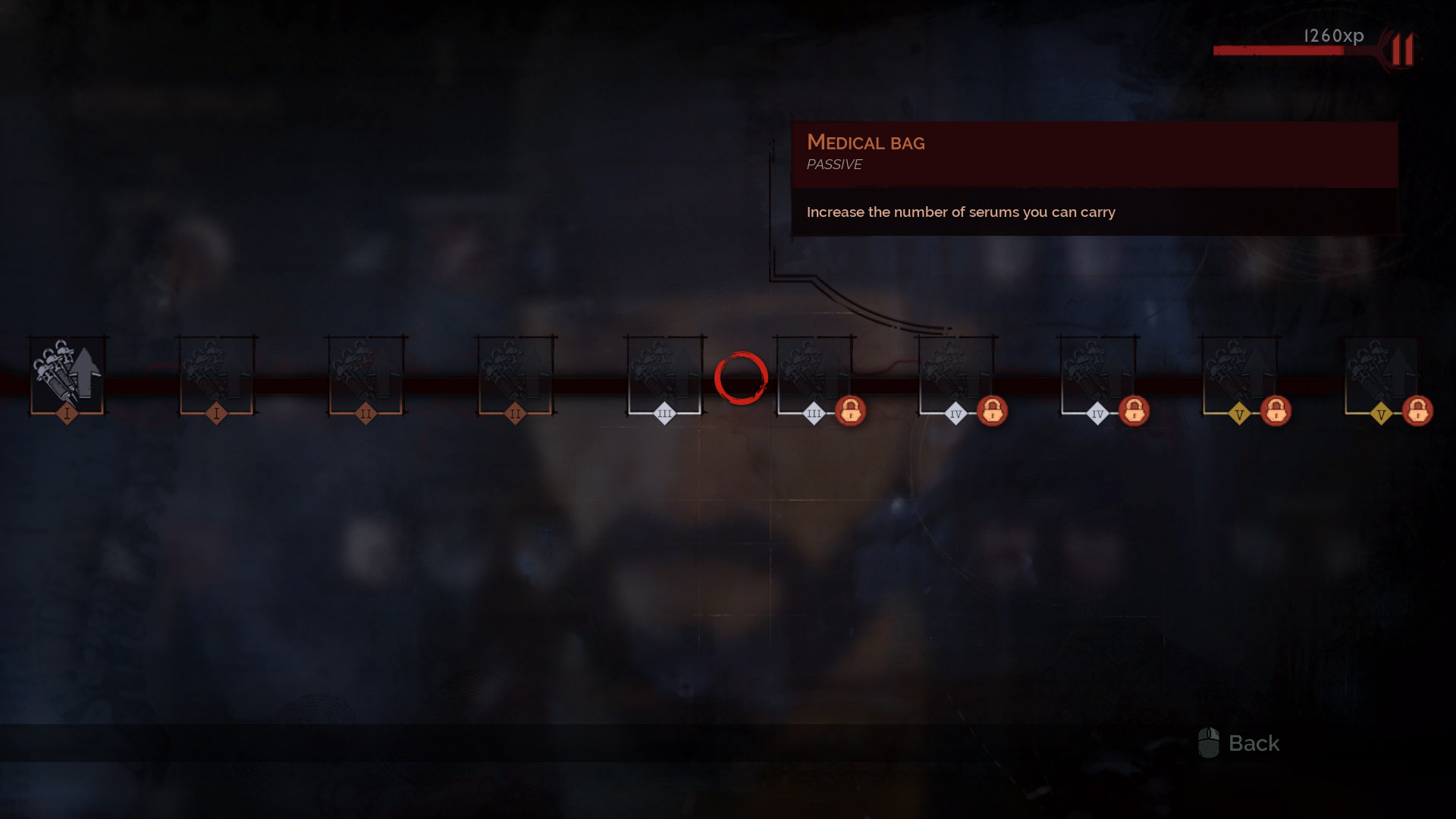 Finally, the science ability focuses entirely on the equipment that Dr Reid has available to him. Evolving this ability means he can carry more of these items.

Picking abilities can be tough, especially with the high cost associated with evolving a skill. However, in the event you find that an upgraded ability doesn’t fit your playstyle, select the reset option at the bottom of the skill screen to wipe the skills and get back the experience points to spend them again.