Merrick's Quest Walkthrough in The Hungering Deep - Sea of Thieves

The Hungering Deep has surfaced in Sea of Thieves, and a lonesome pirate by the name of Merrick has a scavenger hunt quest for any pirates looking to take on the latest threat in the seas. What awaits pirates are a series of riddles that taken them all around the Sea of Thieves in search for the dreaded megalodon.

How to Complete Merrick’s Quest

Starting up Sea of Thieves and loading into a boat will drop pirates off at a local tavern on an outpost where a new character will be waiting. Duke is a Bilge Rat who hears rumors of adventure and intrigue, and he’ll pass this information onto any willing pirate. The first step is to head to Shark Bait Cove and speak with Merrik. 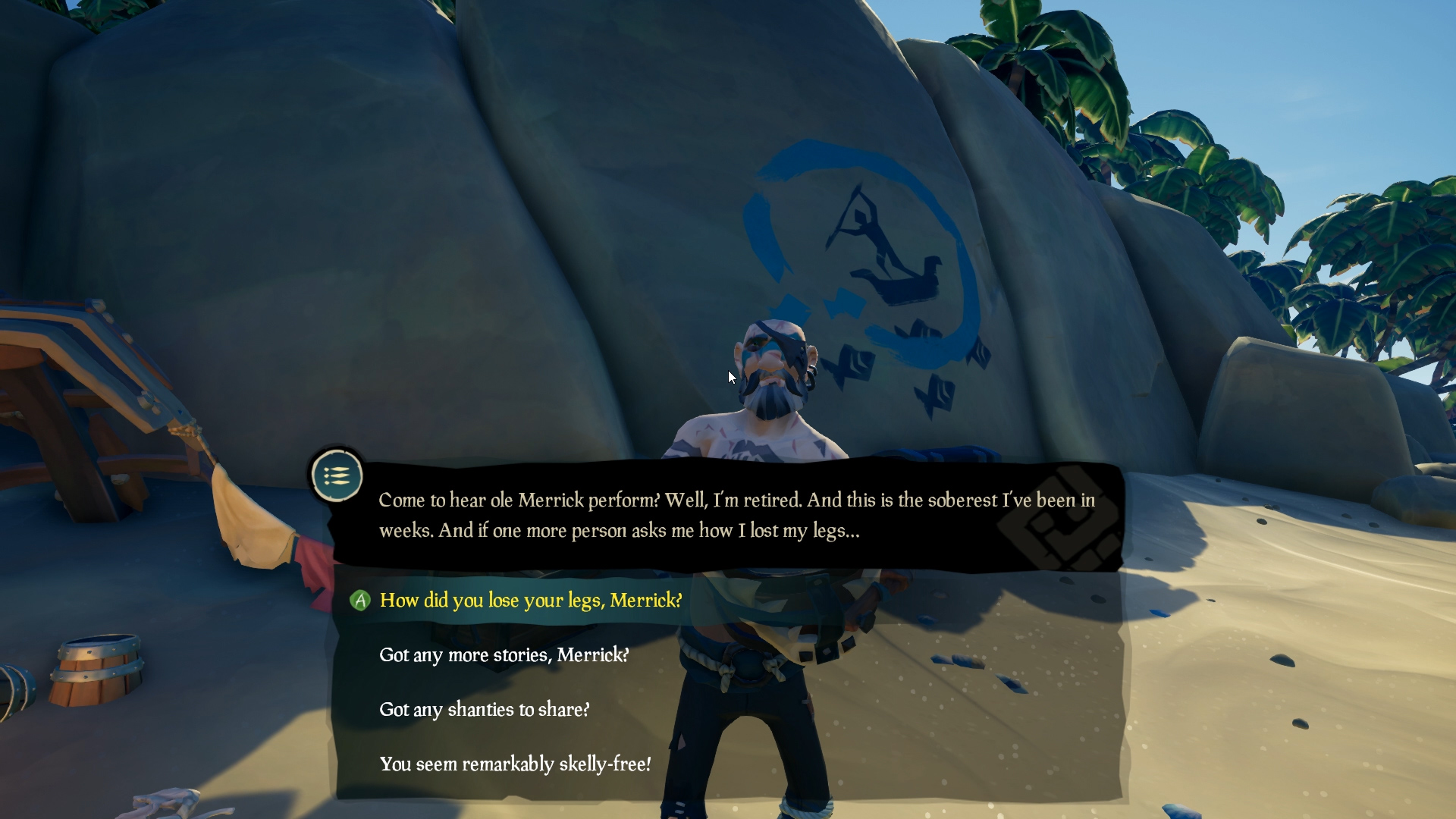 After arriving at Shark Bait Cove, head to the southwest outer-ring and speak with Merrick. Ask him, “How did you lose your legs, Merrick?” to begin The Hungering Deep quest. Merrick will suggest tracking down his journals, and one happens to be on Shark Bait Cove. 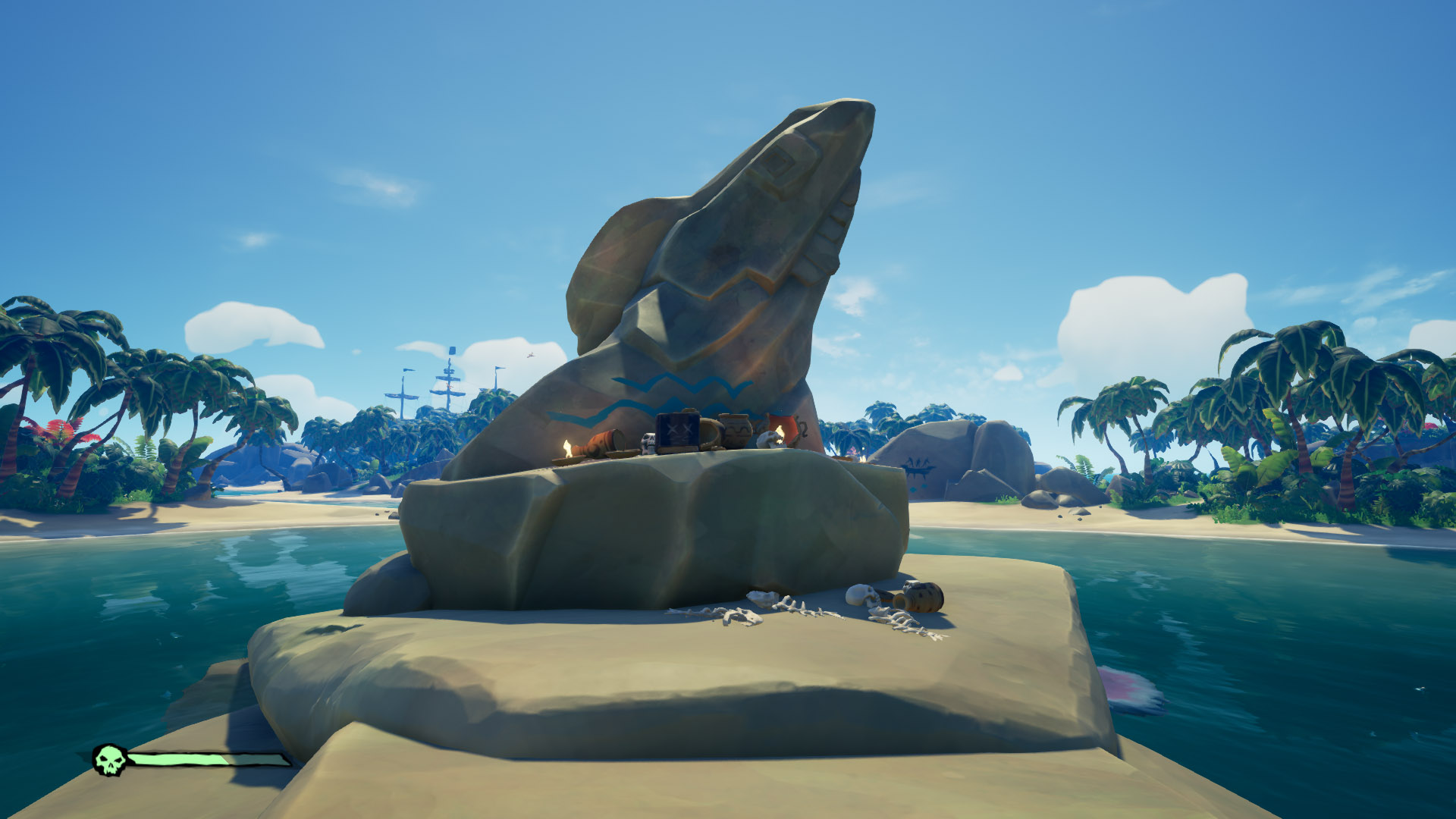 The first journal of Merrick’s that can be found is located on Shark Bait Cove “by the fin-rock that stands in a lagoon.” This hint refers to the very center of the island where a shark-shaped rock juts out of the water. Walk along the bridge to see the journal (marked with XX). Interact with the journal to receive the next set of clues:

Disaster has struck! I played me new shanty with me crew, inspired by the notes of the old tribes. Even another ship joined in! But… the beat somehow called to a creature… just like what the tribes worshipped. It was over in moments. The sea was red before, but much more so after. Me crew were reduced to nothin’ but shark bait, along wiv me legs. The last of us fled. I’ve noted the map number, in case I ever get so drunk I forget. The letter needed is one dear to me heart.

I’m goin’ for a drink! I’ll charm one out of me favorite tavern keeper, with a little romantic verse…Red haired and fair of face, her tavern stands at a shining place! A place where captains hang their hats, head there for boozy chats!

From these journals we can gather that Merrick played his drum along with another boat of pirates, which summoned the creature. This event occurred at a specific location which Merrick has marked down. And finally, he went to get a drink at his favorite tavern, whose barmaid has red hair and a pale face. The tavern Merrick describes is the one located at the Golden Sands Outpost, The Captain’s Head. 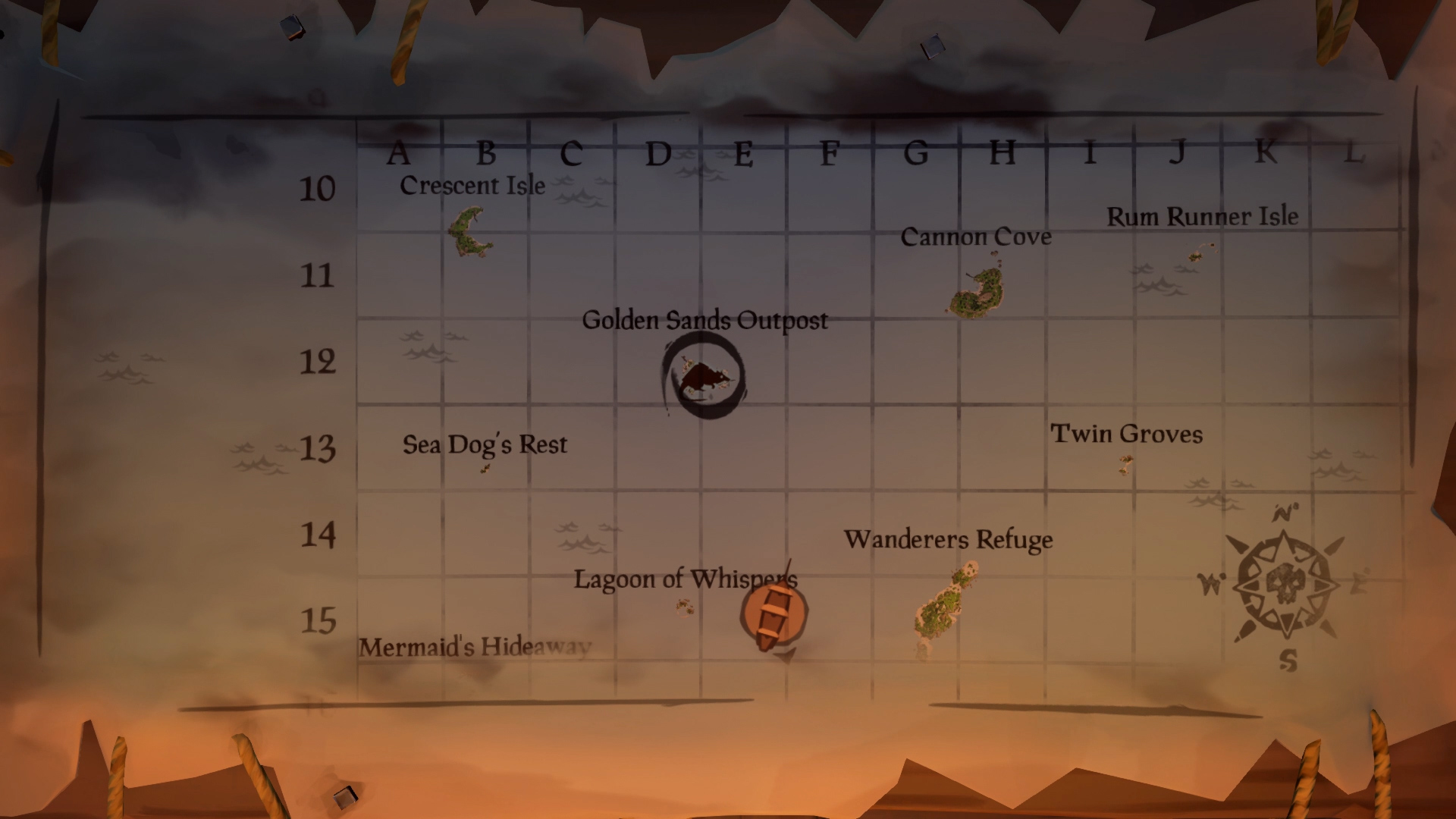 Set sail for the Golden Sands Outpost, and after arriving, head to the local tavern and speak with Tina. A new dialogue option will be available for selection, “Have you had any especially drunken pirates in lately?” 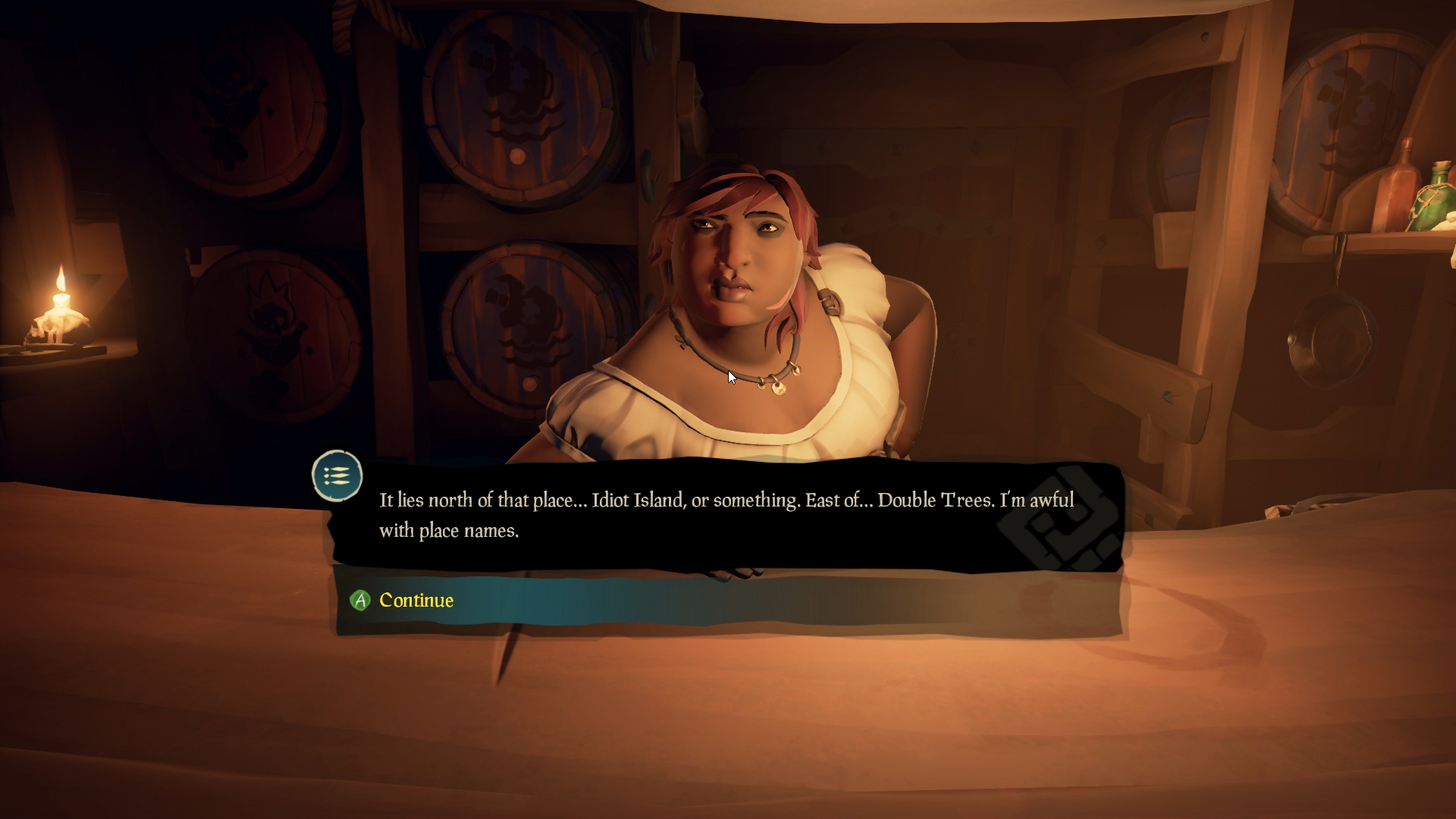 Tina: Well, there’s that scallywag Merrick! Always trying to get charm free drinks out of me with shanties and stories. You seen the wreckage of his ship, the Killer Whale? The crow’s nest is still standing out of the water. He said he ‘fled for sanctuary’ after fighting some beast, but ran out of planks! It lies north of that place… Idiot Island, or something. East of Double Trees. I’m awful with place names. If you see that drumming drunkard, tell him to pay his tab!

The direction Tina gives is north of Fool’s Lagoon and east of Twin Groves, at an uncharted island located at L14. It’s here that pirates can find Merrick’s sunken vessel and his second journal. 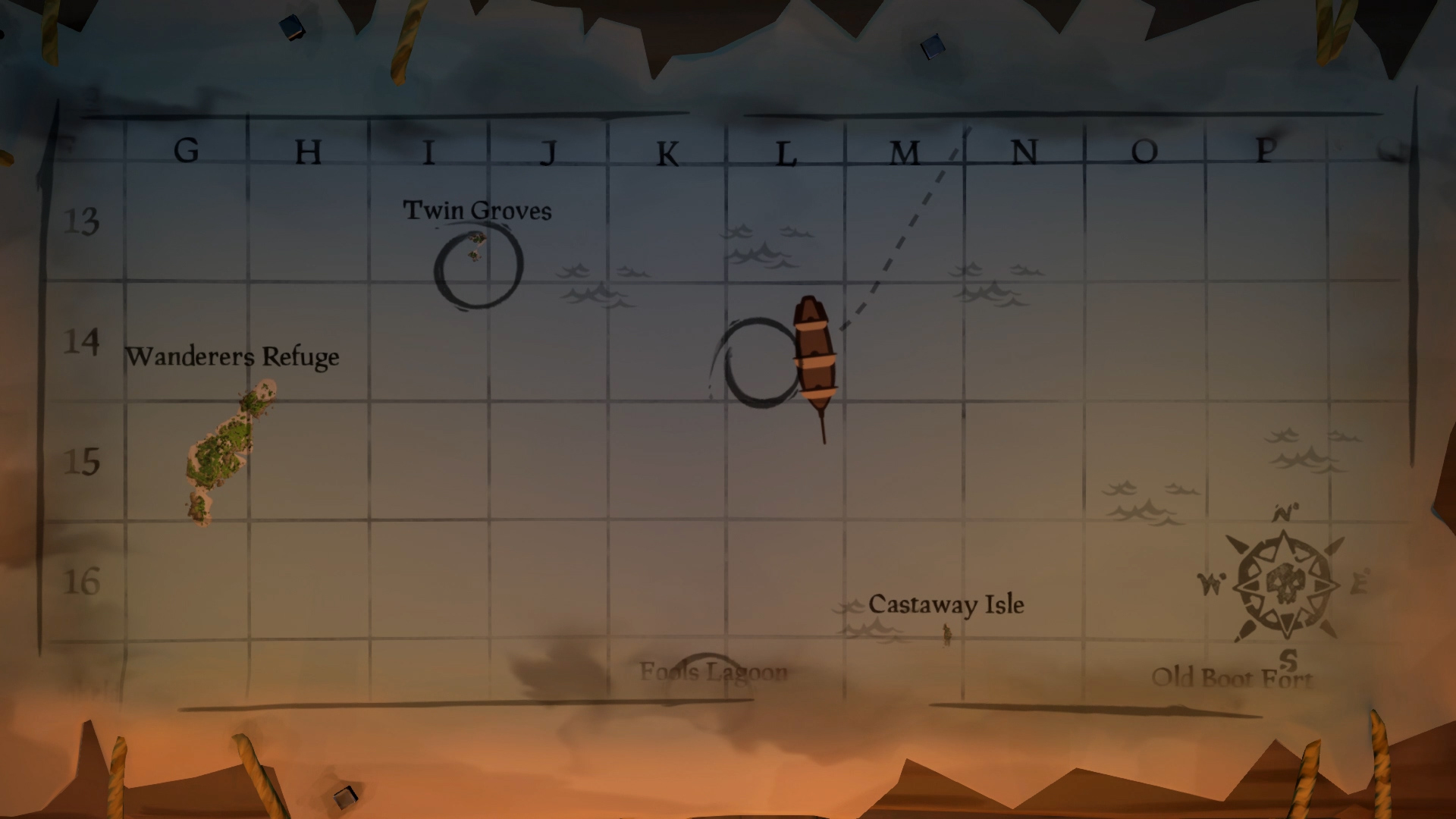 Head to L14 on the map, and keep an eye out for an uncharted island. This island will have a crow’s nest jutting out of the water, and in this crow’s nest is another one of Merrick’s journals. This journal has the Roman numeral V on its face. 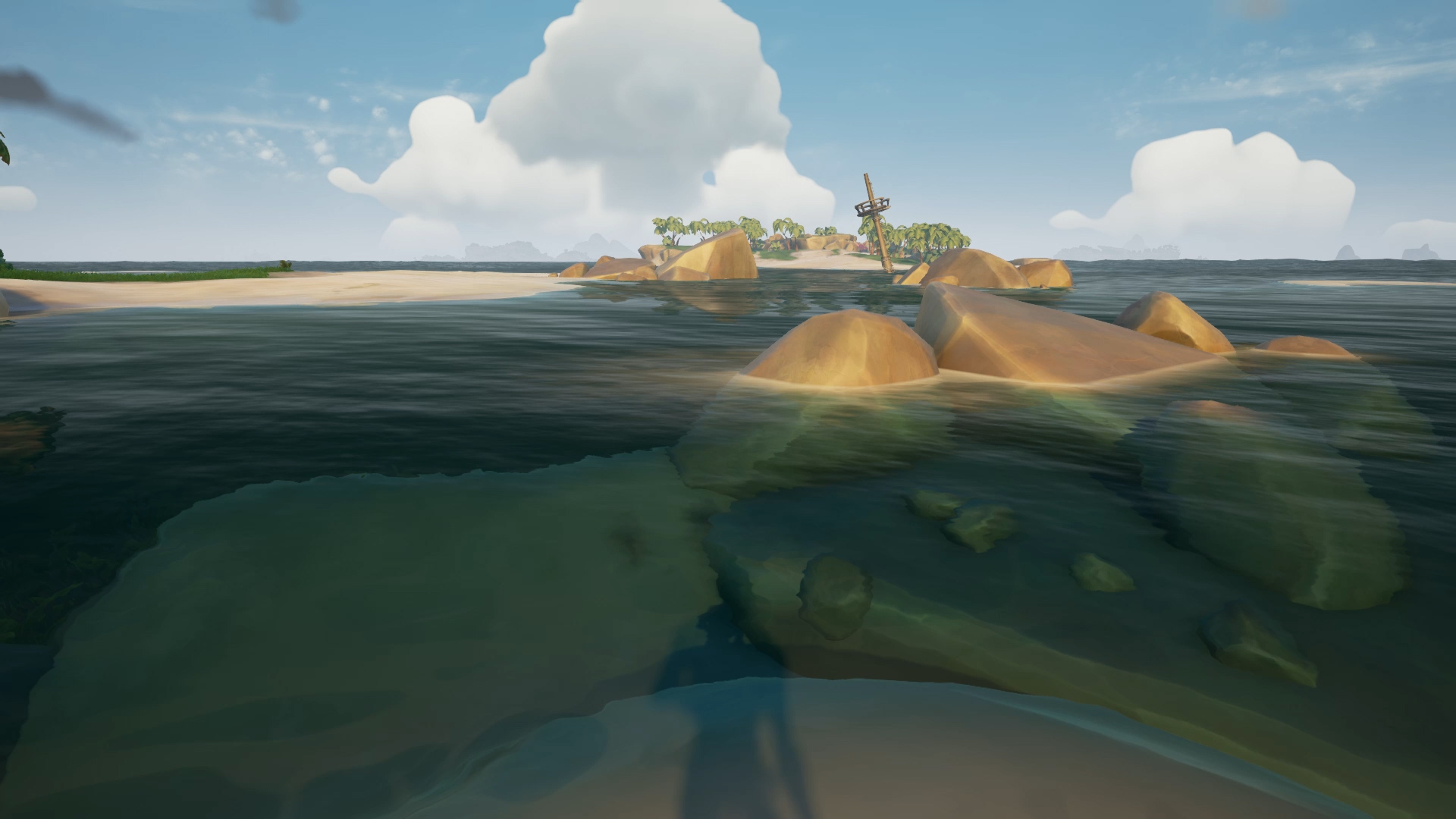 Read Page 19: Back to the wreckage

Why do I TorrTure meseff? Comin back to the wreckij of th Killer Whale. If I could summon the shark again… I could avenge me Crew. An me legses. I went Too the same spot, but he isn’t comin. What’s difrent? Mebbe I’m tooo drunk. Can’t hardly writ. Gonna get a cuppa T, clerr my head.

Tea is too.. sobering. Gonna get more grog, from my dear… whassAName. T somehinge. Find herrr from my romantic verse: The tavern that hasss a nasty bite, where the drunks sslither evry nighT. The BARkeep’s fond o her own grogg, a scarred beaut in a Wild spott. Rymin’s hard when you canT sea strait.

This journal refers to another barmaid that Merrick is sweet on, one that can be found in a wild spot. To continue Merrick’s quest in The Hungering Deep, set sail for Dagger Tooth Outpost and head to The Snake Pit tavern where Teri will be waiting. 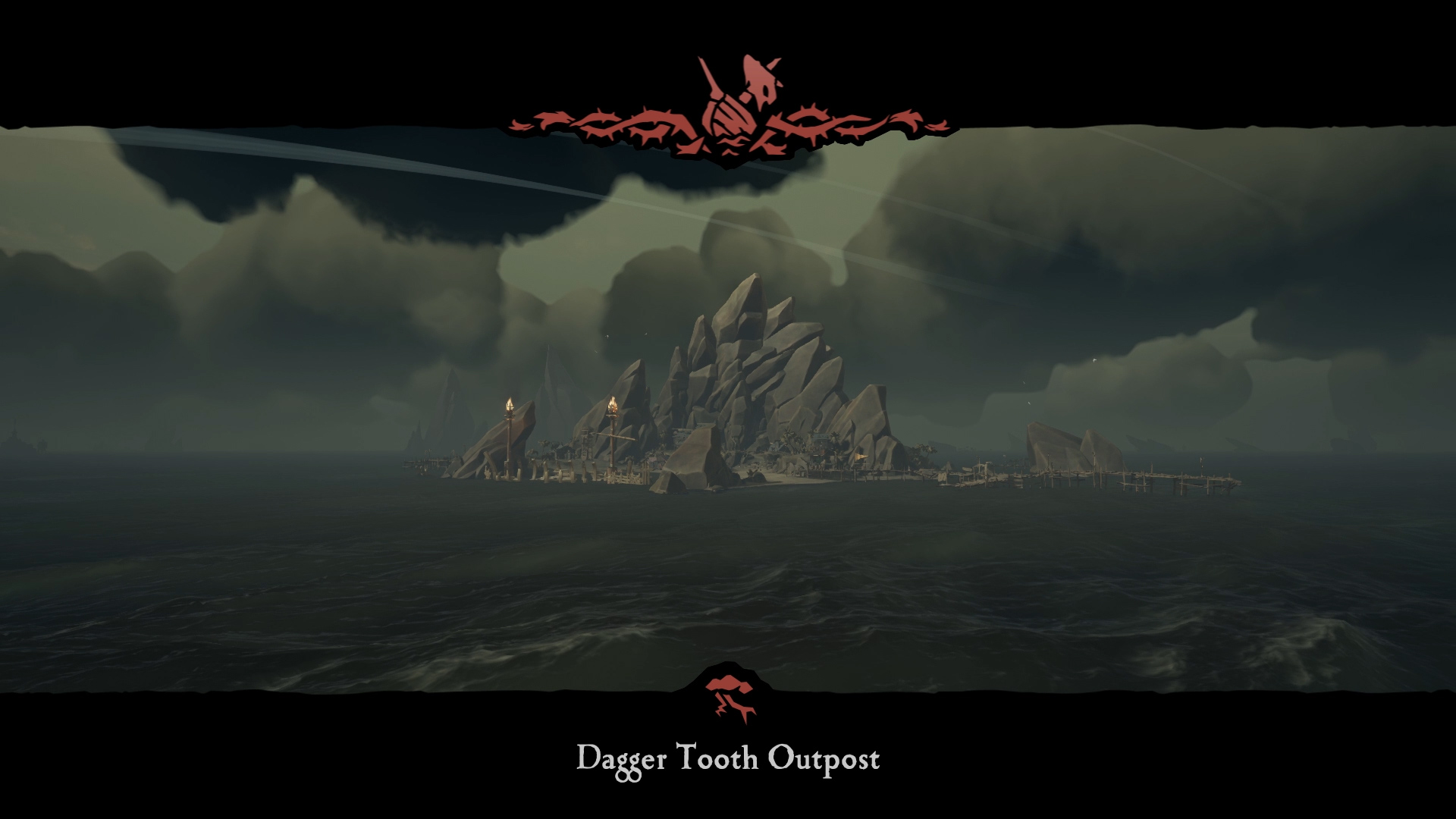 Enter The Snake Pit tavern on Dagger Tooth Outpost and speak with Teri the barkeep where she can be asked the same question, “Have you had any especially drunken pirates in lately?” 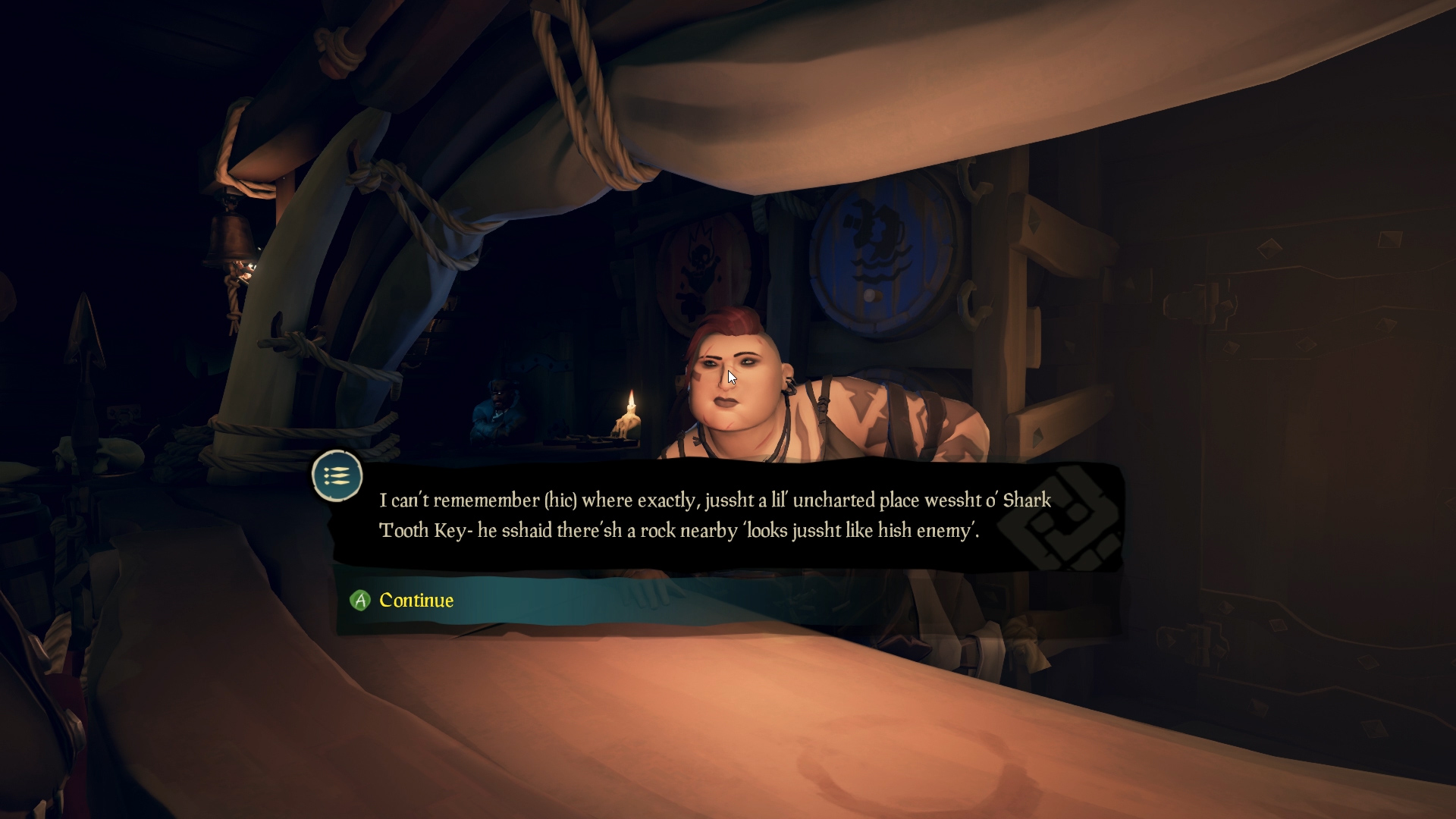 Teri: Mossshtly seen ‘merry’ Merrick! That rogue issh the one (hic) p-p-pirate who can match me grog fer grog! Lasht t-t-time we had a party, t’wasshh in that fishy lil cave. Not assh romantic assh he thinkssssh. Underr the golden arch. What a PALAVER! I can’t rememember (hic) where exactly, jussht a lil’ uncharted place wessht o’ Shark Tooth Key- he sshaid there’sh a rock nearby ‘looks jussht like hish enemy’. If you wanna know more about (hic) him, I’d look there.

Deciphering Teri’s drunken drawl can be a bit challenging, but the directions she gives is to head west of Shark Tooth Key and look out for an uncharted island located at S16. 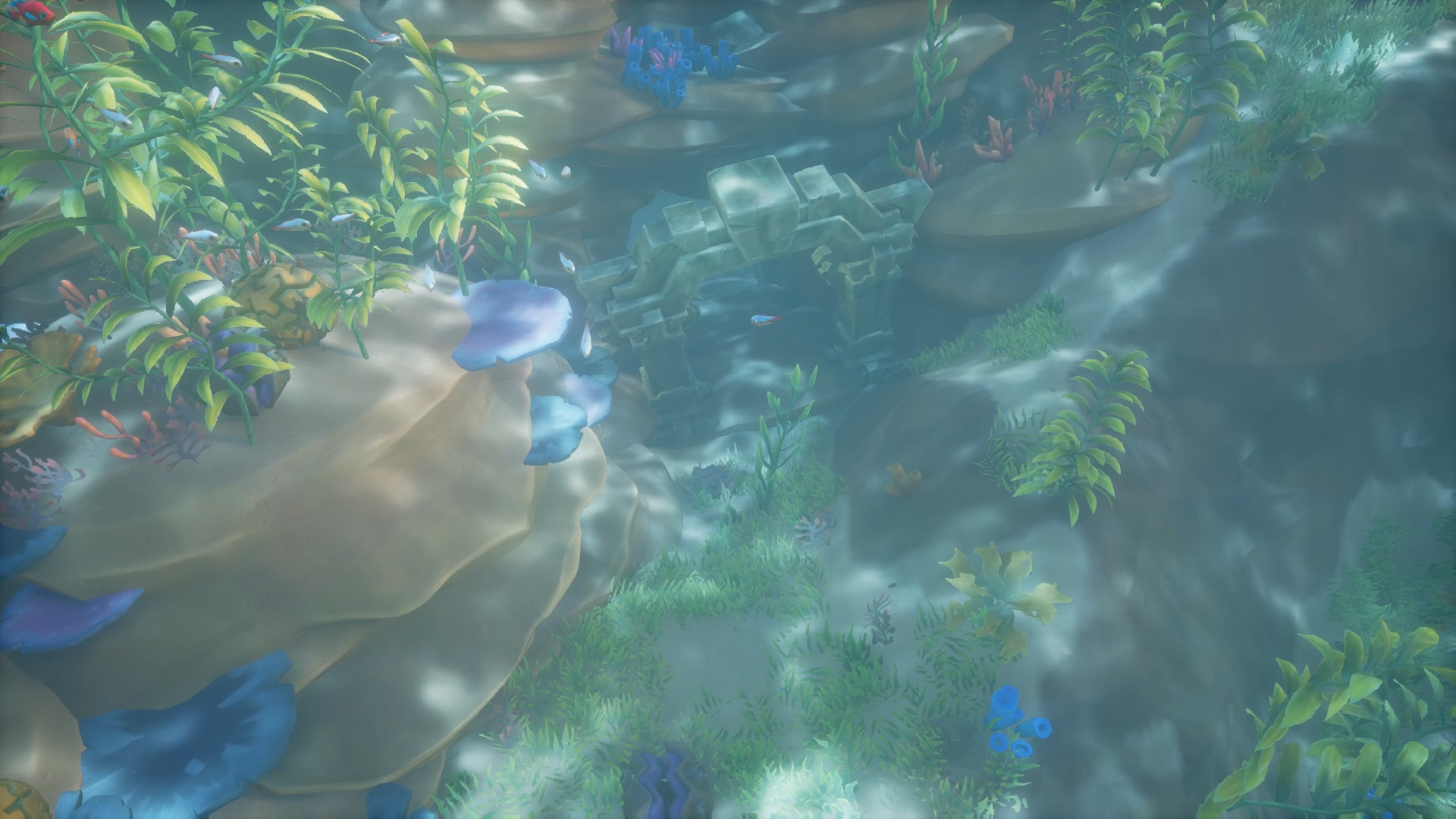 The last of Merrick’s journals can be found at S16, an archipelago with a secret underwater cave. Swim around the island and look below the water to find an ancient archway that feeds into a tunnel. Proceed through the tunnel and up into the cave to find a statue on top of a rock, and resting against it is Merrick’s final journal labelled with the Roman numeral I. 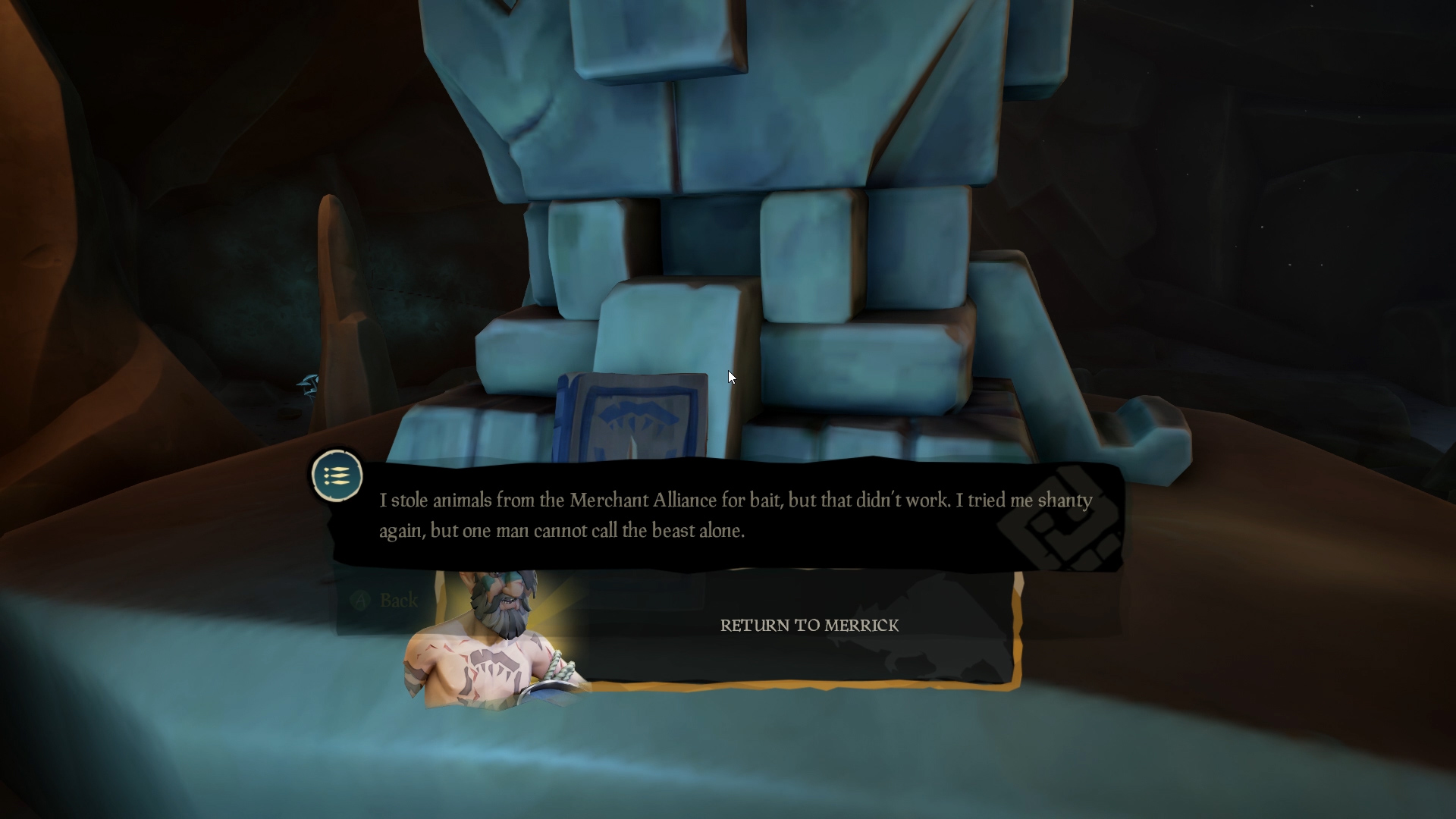 Read page 23: Back to me hideout

Back to me hideout, where I do me best writin’. Must admit, I didn’t like making the swim, knowing what’s out there. Thankfully, it seems to stay near that infernal ridge. I don’t know how to get my revenge on that spiteful shark. Maybe I’ll go back to the grog. I stole animals from the Merchant Alliance for bait, but that didn’t work. I tried me shanty again, but one man cannot call the beast alone.

If enough worthy souls could learn me shanty… no, it’s too dangerous. I’m stocking up on grog, going to Shark Bait Cove and retiring me drums. I’ll be there, crafting new drums, just in case someone does prove their worth.

The last journal makes note of an “infernal ridge” which refers to Devil’s Ridge and that the shanty cannot be played alone, important pieces of information which will be useful soon. For now, the quest takes pirates back to Shark Bait Cove to speak with Merrick once more. 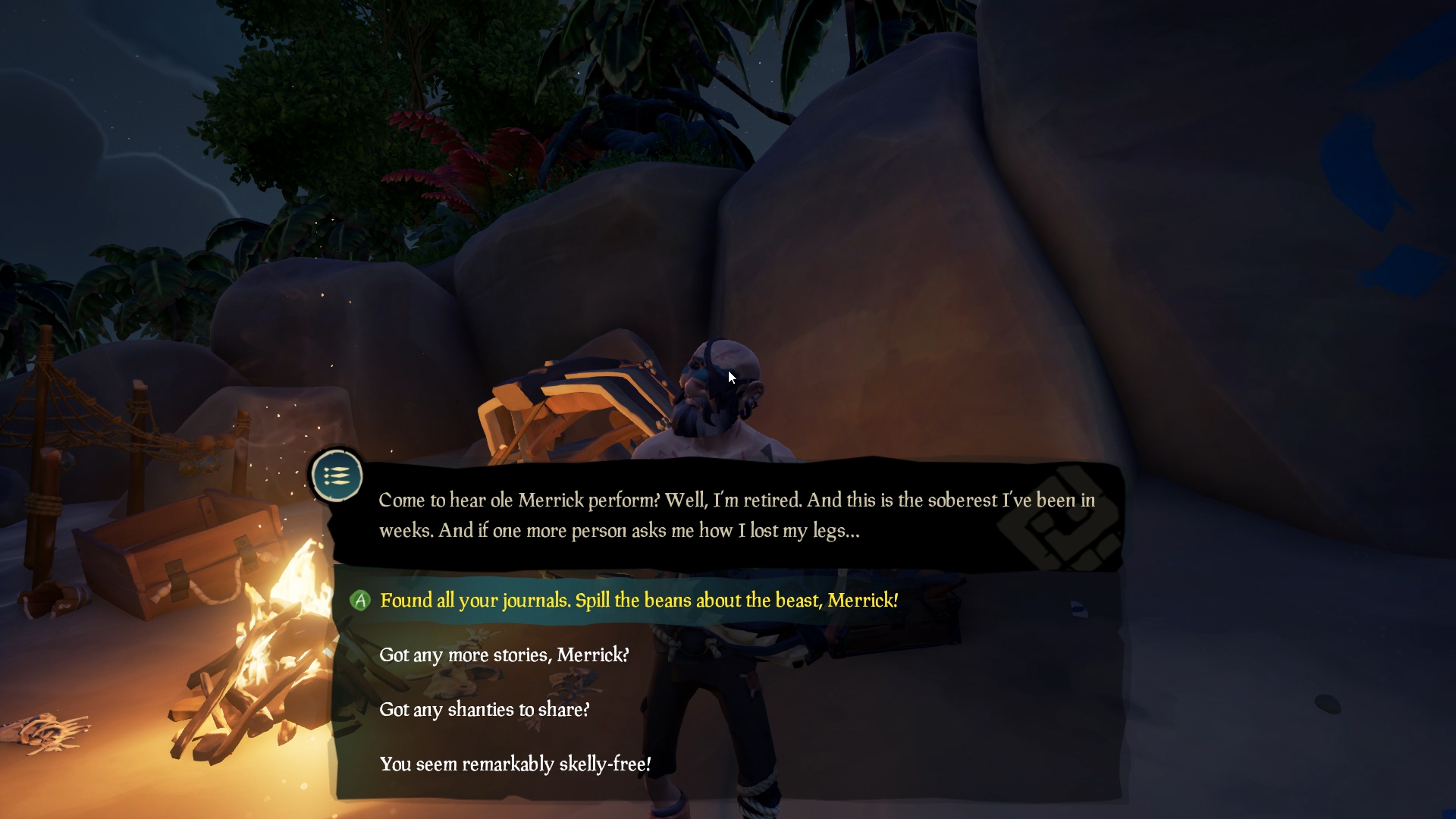 After finding all of Merrick’s journals, return to Shark Bait Cove and speak with the peg-legged pirate. A new dialogue option will appear, “Found all your journals. Spill the beans about the beast, Merrick!”

Merrick: Oh… you really found all those? Okay, I’m impressed. Alright, I’ll change me tune and share the secret of me shanty…When played properly… meaning you need at least five people, playing in harmony… The rhythm calls to the finned fiend that took me legs… as well as me crew. I wasn’t up to the challenge, but maybe you can avenge us… I’ll teach you me shanty. It must be played in that special place I mentioned in me journals… just don’t get too close to the Shroud! I hope you can carry a tune… take this drum with you. I’m thinking of making more, now I’m retired. And hey, wear me tattoo. I want that thing to know who sent you! 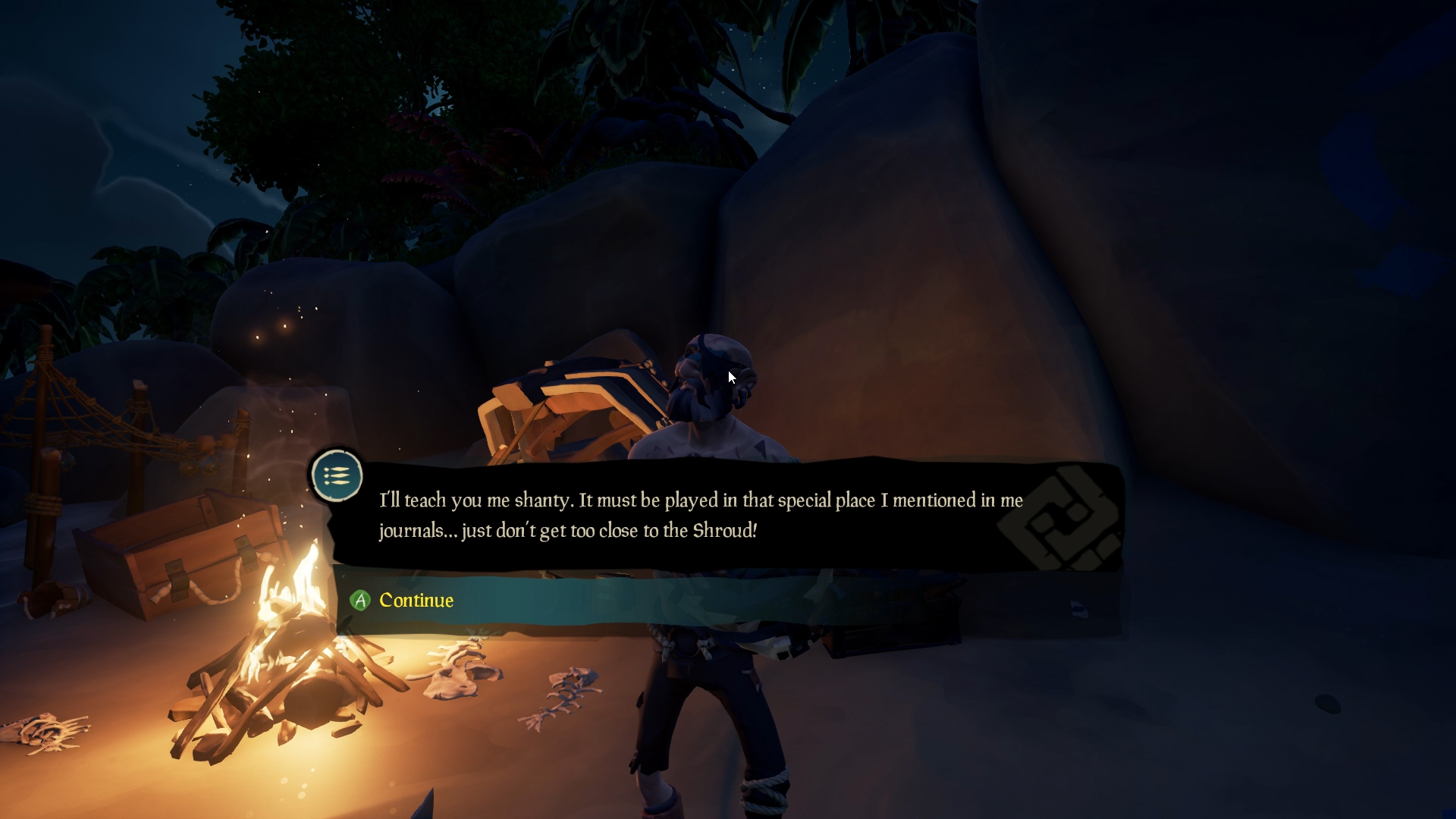 Again, there’s a lot of information here. Merrick makes mention of the special place he’s made note of in his journals. Some keen-eyed pirates might have noticed that Merrick’s sweetheart tavern keepers all have names that begin with the letter “T” (the letter close to his heart) and all of his journals are numbered (XX, V, I) and these add up to 26. The special place to fight the beast is located at T26 (just southwest of Devil’s Ridge). 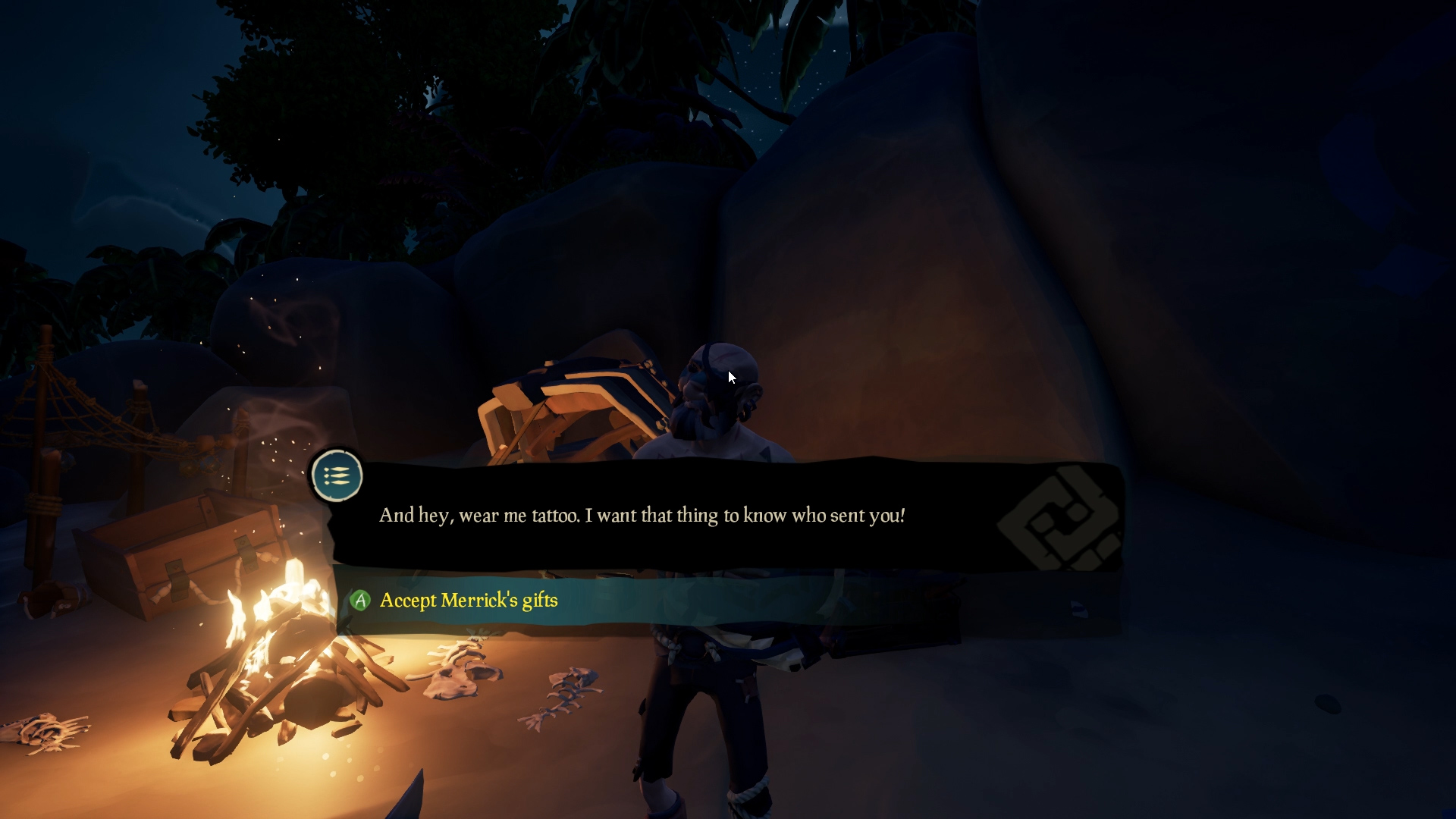 Furthermore, Merrick says to put on his tattoos, which can be done at the vanity chest behind him. He also hopes players can “carry a tune”, which literally means carrying the song Merrick plays all the way to T26. This can be accomplished by having a player stand on the ship while another plays the drum while standing next to Merrick. The player who has the tune must swim over to the ship while playing the drum, so that the pirate on the ship can play the drum "picking up" and carrying the tune. One player must always be playing the drum, as the tune is not learned and cannot be started without Merrick. 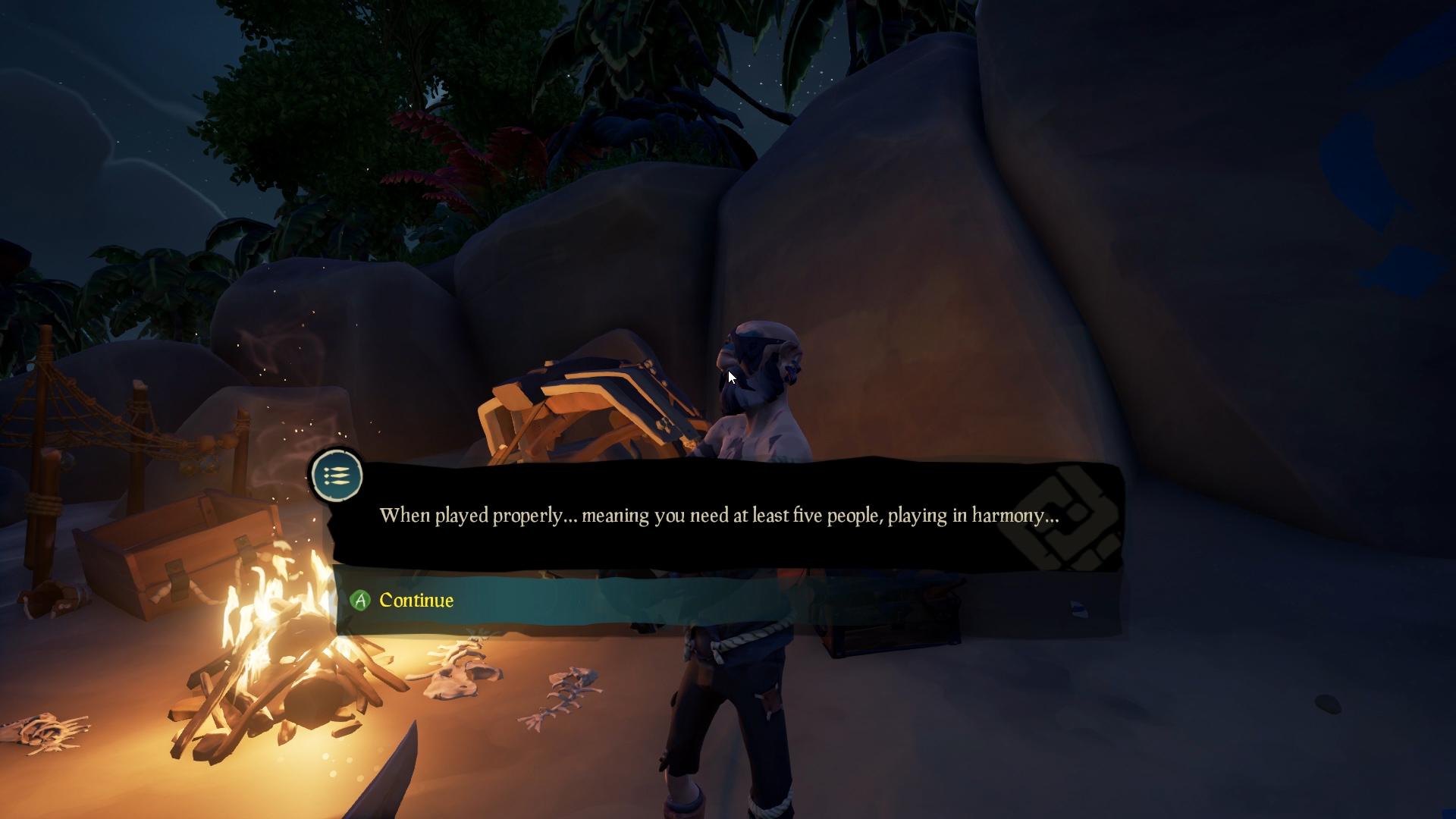 Finally, the beast can only be summoned when five pirates are playing the tune, which means teaming up with other players! 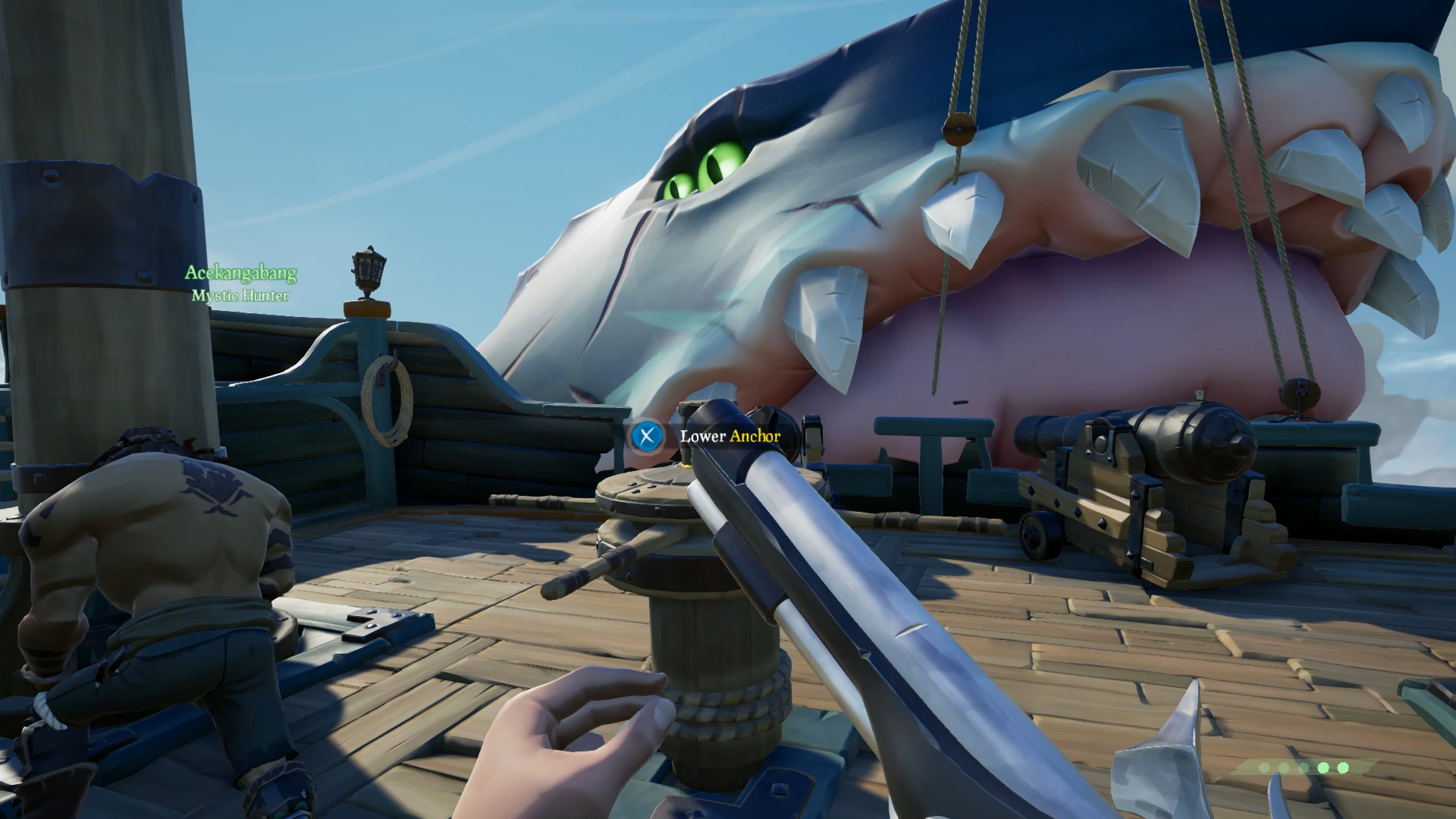 With Merrick’s song being played, and all players wearing Merrick’s tattoo, sail to T26 and play the tune with a group of five pirates to summon the megalodon! Everyone's tattoos will begin glowing when enough pirates are playing their drums at the correct coordinates. Taking down this creature is no easy task, so come prepared by knowing how to kill the megalodon, lest you succumb to the same fate as Merrick’s crew. 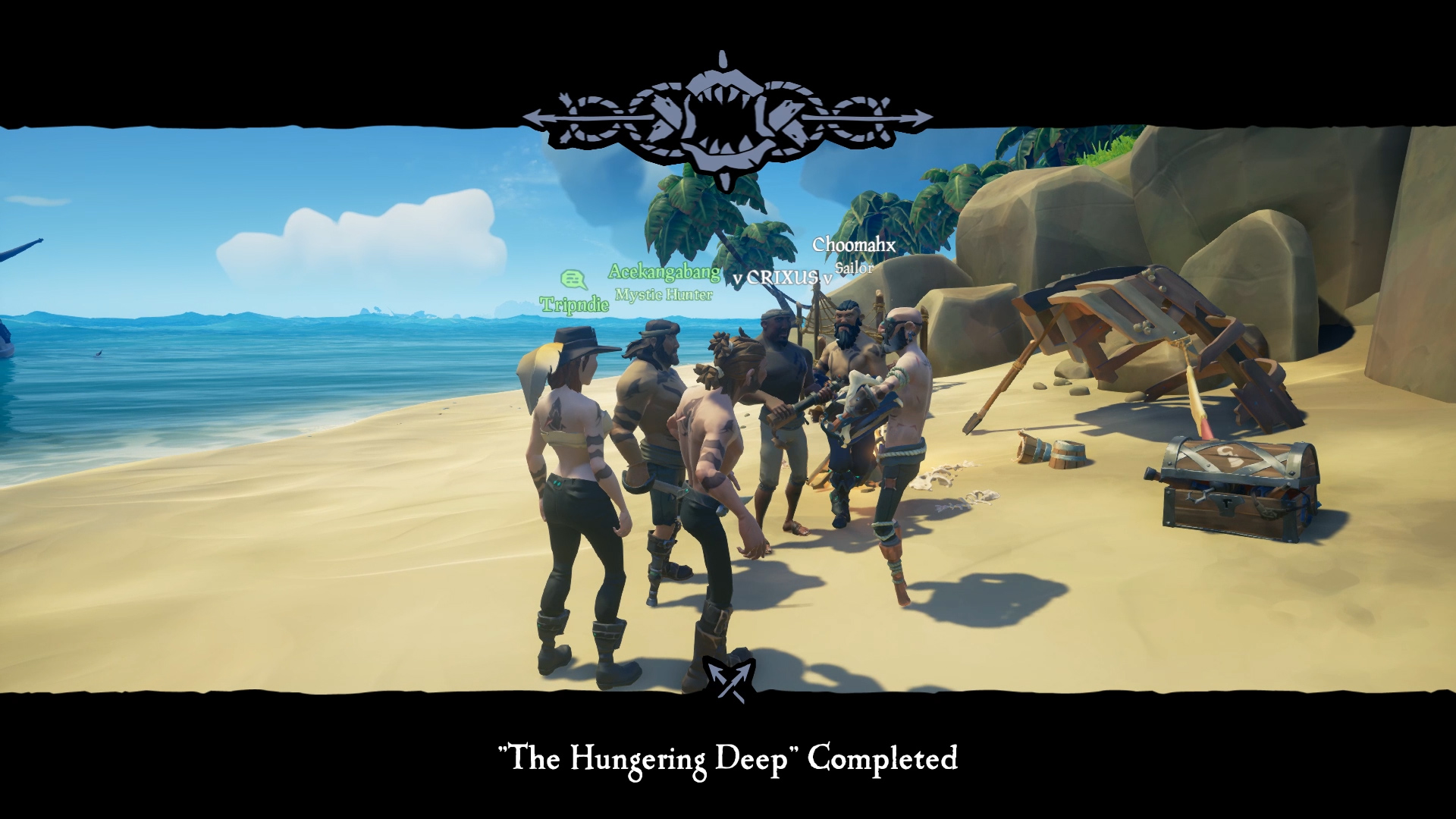 After killing the megalodon, return to Merrick to receive the reward! Players will have earned a special figurehead for their ship, a carving of the megalodon to let all pirates know you wiped the smile off the shark’s face. With the megalodon slain, be sure to check out the Shacknews Sea of Thieves Guide and Walkthrough for more pirating tips and tricks!