Arma 3 Is Free to Play This Weekend, With Deep Discounts for Buyers

If you've been looking to get into the military shooter Arma 3, it's your lucky day. Bohemia Interactive is running a free play weekend for the shooter in celebration of it hitting 4 million players, an impressive milestone if you ask me. The Free weekend is running through April 30 at 1 PM ET, so if you hurry up and get started now, you should have a full weekend of gameplay to rack up before deciding whether or not you want to give it a full purchase.

If you do get through the weekend and decide it's totally for you (and you probably will, because it's awesome) then you can look forward to a 66% off discount from the base game and all of its DLC packs. You don't have to choose from just playing vanilla Arma 3 in that case, and you'll be saving a little bit of money in the process. If you like Arma enough to go back into the past and play more, you can also grab the older titles for a whopping 80% off. 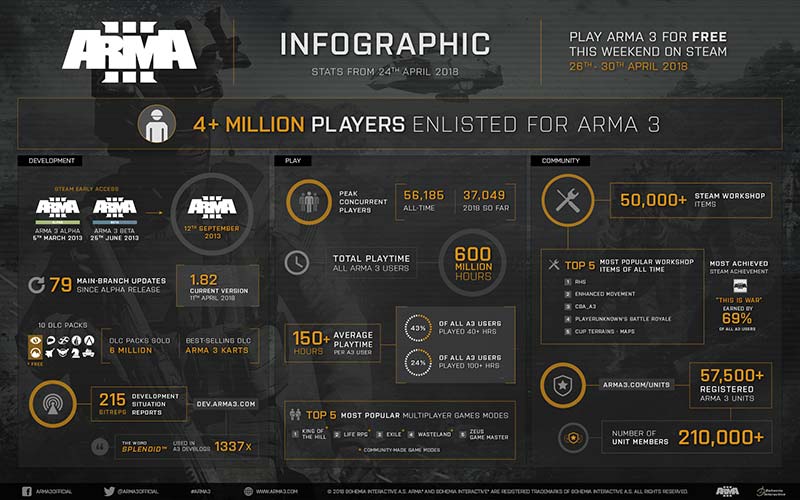 You don't have to stop at the DLC and Arma 3, though. The cool thing about the shooter is that you can use tons of different mods available via Steam Workshop to keep the war games going, like the original Battle Royale mod that eventually led to the rise of PUBG and Fortnite. Bet you didn't even realize that. Go ahead and give it a try, and if you like it, let us know if you end up picking it up for some full-scale Shackbattles. Don't be shy. Or be shy and still buy it anyway. We love you, so that's fine.