Nintendo just announced their plans for E3 2018. The Big N will host two esports tournaments for Super Smash Bros and Splatoon 2 and plans on breaking the internet on June 12 at 9 AM PT with a new Nintendo Direct. The Nintendo E3 2018 video presentation will focus on new Nintendo Switch titles to be released this year as well as the recently announced Super Smash Bros game. 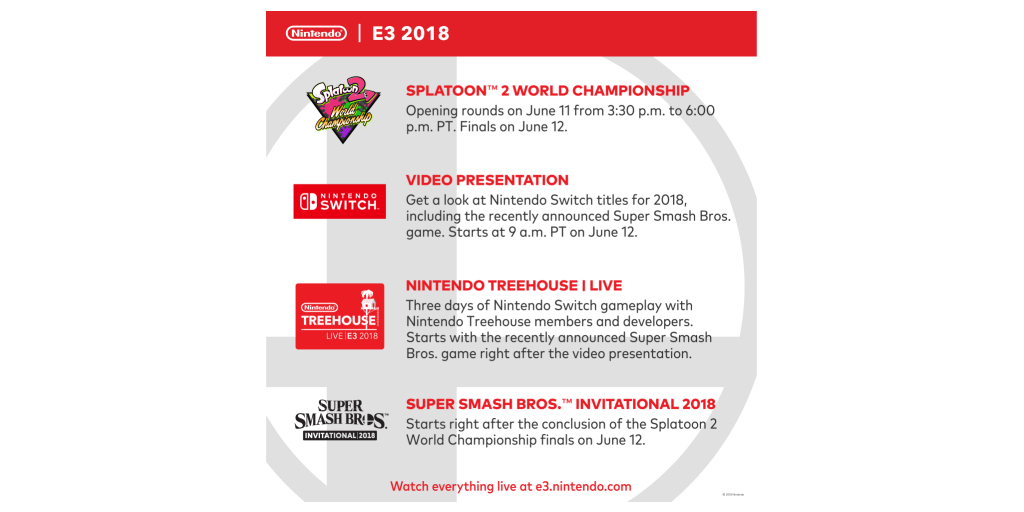 Nintendo's Treehouse Live show also returns this year to E3 with three days of live streams from the show floor. Nintendo Treehouse: Live | E3 2018 will feature live gameplay along with appearances from developers to give gamers an inside look at the latest Nintendo Games.

“Every year we take a look at E3 and craft the best experience for our fans, regardless of whether they are attending the show or watching from afar,” said Doug Bowser, Nintendo of America’s Senior Vice President of Sales and Marketing. “We expect that each of our E3 activities will give an additional boost to the already strong momentum enjoyed by Nintendo Switch.”

More details will be dribbling out over the next few weeks about Nintendo's presence at E3 2018, be sure to check out the official Nintendo E3 website to catch all of the live streams and news as it breaks. In case you missed it, Tatsumi Kimishima retired as Nintendo President today. Check out our article for more information.