God of War: The Journey - Jotunheim In Reach

The latest chapter of our God of War walkthrough centers around the mission titled Jotunheim In Reach. Within, Kratos and Atreus will find complications in their plan to reach Jotunheim, eventually striking out to find the lost object needed to complete the journey, but not without first getting roped into a crushing conflict.

Listen as Atreus says his piece about the nearby runes, then follow the path back toward the quest marker. Open the double doors, speak with Brok if desired, then take the light bridge up to the Realm Travel Room.

Approach the table and select to the new option to travel to Jotunheim. After a moment, Mimir will chime in to explain why the travel won't work — there's no travel crystal. Fortunately, the head does have a plan on what to do next.

Talk to Brok and Sindri

Turn around and head back into the workshop. Speak with Brok at the table to trigger a cutscene where Sindri deals with his unusual reflexes. Before it's over, Brok will describe being approached to build a specific item of interest. Afterward, Kratos and Atreus figure out their next destination.

Return to the Serpent's Horn in Midgard

Turn and head out the door to the southeast, then interact with the crank under the archway. After that, allow Mimir to blow the horn to summon the world serpent, then watch the cutscene unfold. 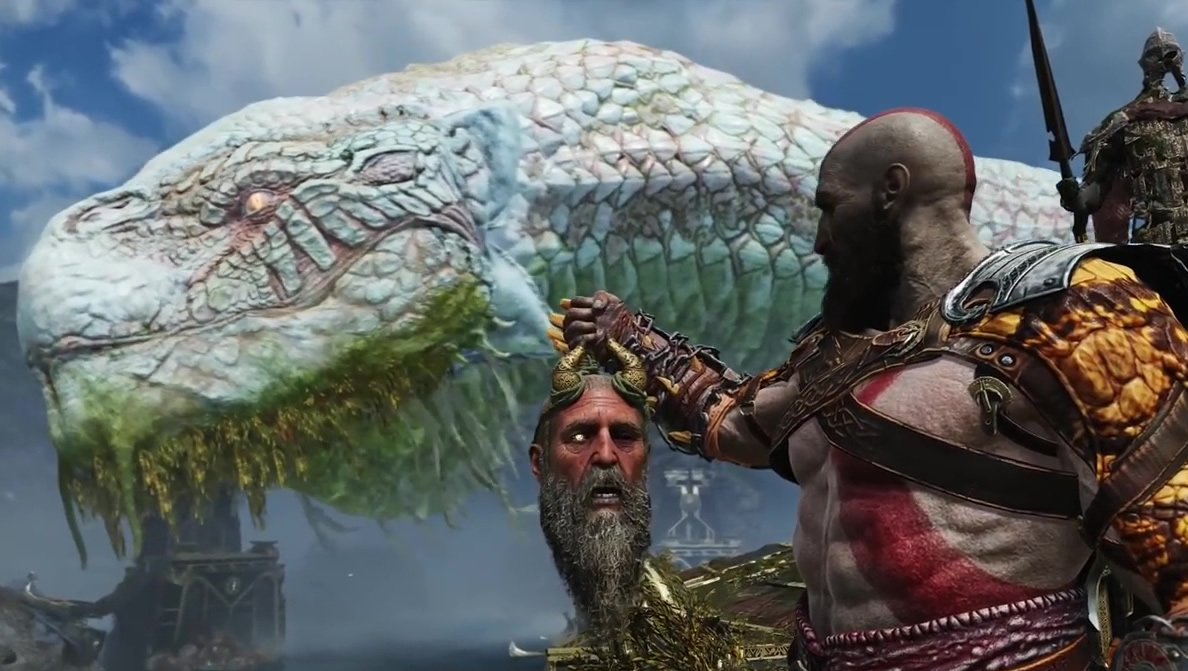 For reasons not fully explained, the world serpent agrees to let Kratos search for the missing statue it believes may still be resting within its stomach.

Boat Into the Serpent's Mouth

Lower the platform back down, then head northeast and turn left down the ramp to reach the boat below. Hop inside, then paddle west into the serpent's open mouth. Enjoy the banter between the different characters, then watch as the whole crew gets engulfed in darkness.

Inside Jormungandr, players will come into the area formally know as Belly of the Beast. Paddle through the red-hued darkness toward the quest marker, turning to avoid clumps of mystery here and there, keeping an eye out for golden auras that signal nearby stashes of Aegir's Gold. Continue toward the same heading until spotting what could be called a beach, then climb up the ship and claim the treasure chest. 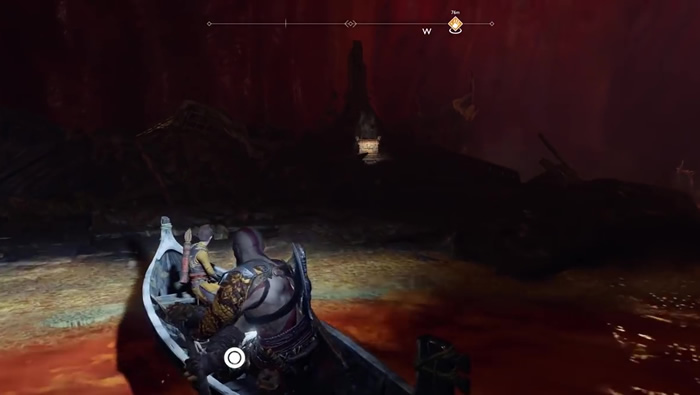 Head back into the water and paddle once more toward the quest marker. Kratos and Atreus will eventually reach a dock. After making landfall, use the nearby spinning machine to swing the carriage overhead, then climb the wall and drop down onto it. Once there, swing around to reach the wall and climb up. Up top, open the treasure chest to find the missing eye. 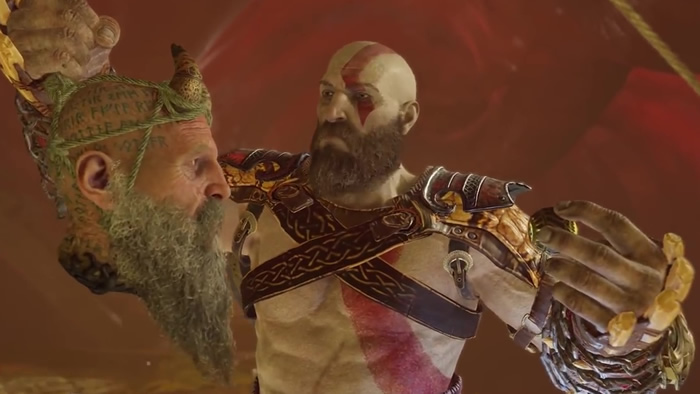 Before heading back down to the water, jump across the gap to open a treasure chest containing the final Niflheim Cipher piece. After that, use the axe to slide down the nearby rope to reach the shore and climb back into the boat. Paddle through the muck toward the serpent's mouth. Before Kratos and Atreus can make a proper exit, they will be expelled. 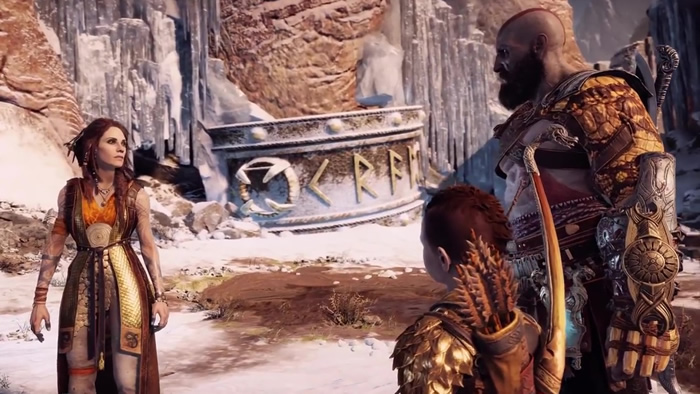 After a short cutscene, Freya will appear. Listen to her story, then watch with mounting tension as Baldur makes a return appearance. Another cutscene will play out, and after it's done, Kratos will be in for a big fight.

As might be expected, Baldur won't go down easy. Not only does he have a huge health bar, he's also keen on teleporting around the battlefield, taking both Kratos and Atreus by surprise. After taking a few hits, another cutscene will play, spelling out several new and interesting developments.

In the new area, Baldur will be even more motivated than ever. Keep a distance from him whenever possible, closing in only when it's safe, making sure to look out for incoming area-of-effect attacks from the titan. Chip away at his health bar using a mix of different attacks.

When Baldur is around 60 percent health, Kratos will come in close for an attack, at which point the titan will intervene. Watch the new cutscene play out, then resume the battle with Baldur in the new area below. 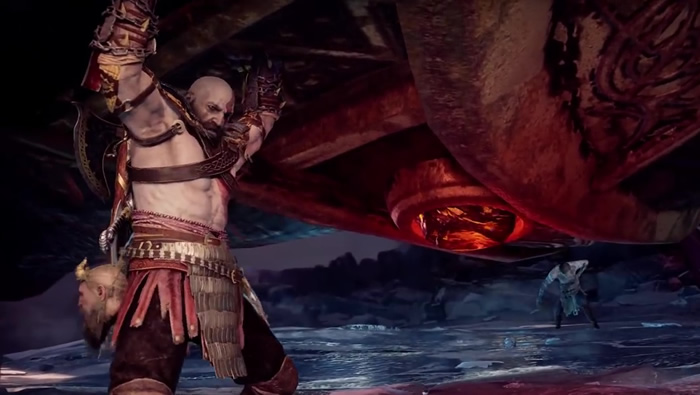 This round Baldur will be infused with the power of fire, and Kratos must deal with him as well as several draugr that spawn within the area. Once Baldur is down to around 40 percent health, Kratos will once again strike a heavy blow. Afterward, Baldur will climb up toward the titan. Follow him up and ride the stone pillar, then resume making with the fisticuffs.

After the cutscene, the third part of the battle will play out. Hammer away with everything Kratos has, making use of any special abilities that may have been saved up to this point. When Baldur's health meter is depleted, a long cutscene will play out, so sit back and enjoy.

This marks the end of the quest titled Jotunheim in Reach. Next up will be the mission known as Mother's Ashes. Keep up to date with the latest story elements and collectibles by heading over to our God of War walkthrough and guide.