Developed and published by Phoenix Labs comes Dauntless, a game that cherry picks the best elements from recent Action-RPG’s and molds them into one. I got to go hands on with Dauntless at PAX East 2018 and was really impressed with what the game brings to the table.

During the demo, me and three others teamed up to explore the Shattered Isles and take on the Shrike, this owl-like creature is one of the many behemoths Dauntless has to offer. We searched the area for a short period of time until somebody found the creature. Once its location was discovered, flares were shot into the sky and it was time for battle.

This gameplay loop felt very reminiscent of Capcom’s Monster Hunter World. Hunt a monster, use its parts to make money, craft better weapons and armour so that you can take on a stronger monster, repeat. That being said, one of Monster Hunter World’s largest downfalls was that it became too convoluted, and it’s number of systems took away from the game’s accessibility. This is where Dauntless has a chance to really shine. The game strikes a great balance between rewarding yet challenging battles and an easy to learn gameplay style that new players can jump right in and understand. 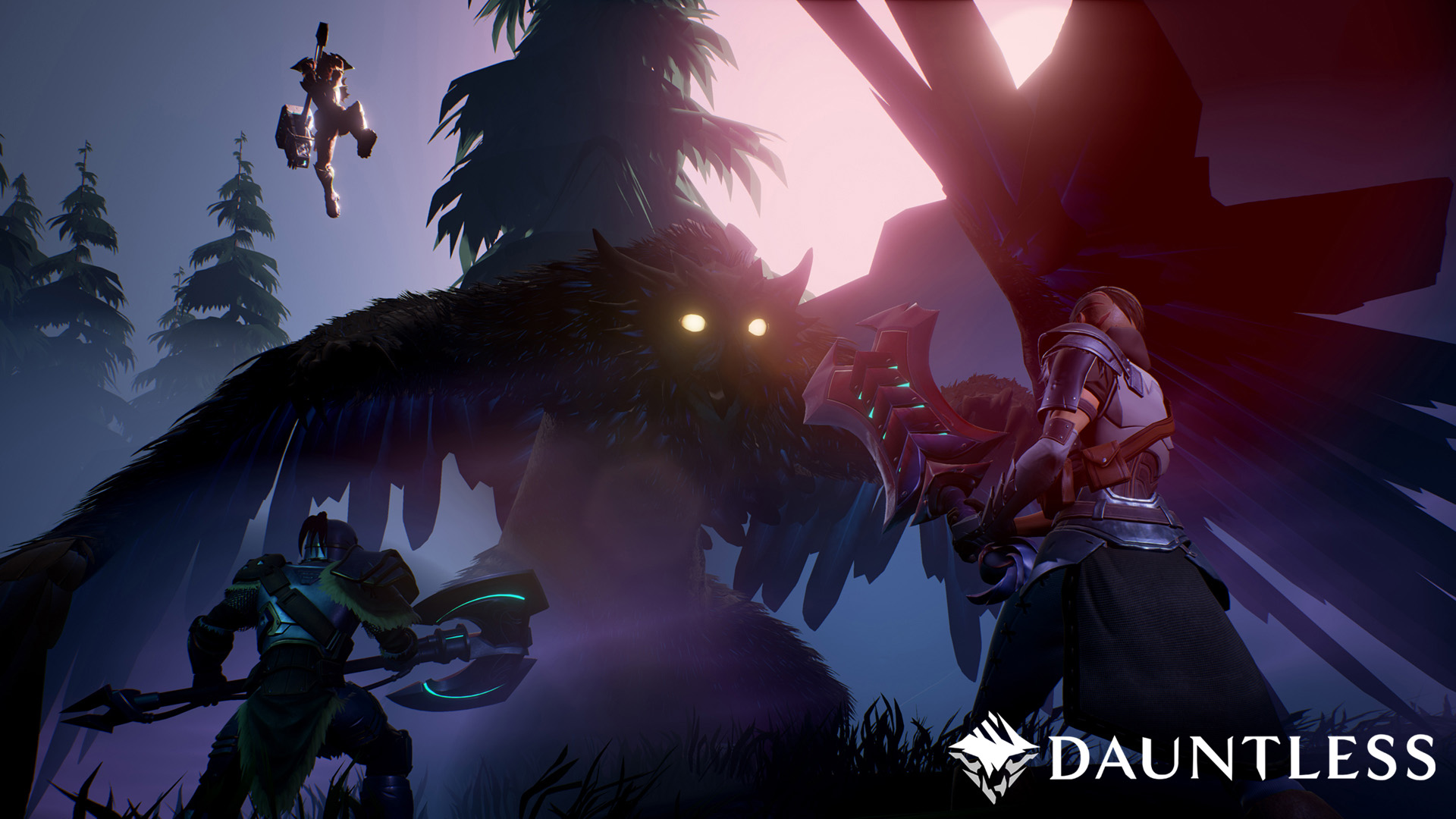 Let’s look a little closer at something Phoenix Labs does so well with Dauntless: the combat. As of now, there are five different “classes” for players to choose from. Sword, War Pike, Hammer, Chain Blades, and axe are the base variety of weapons that gamers will get to choose from when creating their character. Each class comes with its own advantages and disadvantages, so it’s important to have a diverse group of classes within your team as you go after behemoths. For example: The chainblades sacrifice durability for the ability to quickly jump in and out of a fight, whereas the axe trades away speed and agility for the opportunity to land some punishingly powerful blows. I chose to go with the sword; a more balanced option for those looking to have a little bit of everything.

Battling the Shrike felt great! Stringing together combos, getting buffs from teammates, and timing our special attacks all came together to create a fresh boss fighting experience. Something that I’m very curious to get a closer look at in the full game is the behavior of other behemoths and how players will have to adapt to them in order to come out victorious. After a few minutes we began to recognize the Shrikes behavior patterns and were able to predict its next move. This helped us to better understand when it was best to dodge, heal, or go in for the attack. I can’t wait to see how this applies on a larger scale when there are a number of behemoths out there to memorize.

When Can You Play It?

Dauntless is currently in closed beta, but Phoenix Labs has announced that the game will be entering an open beta next month on May 24. If you can’t wait a little over a month, you can access the closed beta now by purchasing a founders pack. The game still has no set release date, but is planned for a summer release, following the open beta. Dauntless will be coming to PC on its initial launch; plans for a console release later down the road. Head of Community Ian Tornay sat down with us at PAX East 2018 to talk a little more in depth about everything Dauntless, watch the interview here.

Stay tuned to Shacknews for the latest coverage on Dauntless as we inch closer to the game’s launch this summer!