What is a Semaphore in Sea of Thieves?

Sea of Thieves has a lot of good things going for it, with players being particularly impressed by the game's realistically complicated sailing and generally breathtaking visuals. Even though they're mostly pleased, some fans want to see the game include more historically accurate forms of navigation and communication. Chief among the latter are pleads for developer Rare to include semaphores, or ways for players to communicate using a pair of flags moved into specific positions. Hang with us as we explore the basics of flag semaphores and consider their place in Sea of Thieves.

Update 6:15 p.m.: this guide has been updated with new information regarding the ongoing Quest of the Golden Banana.

Just What Is A Semaphore?

According to Merriam-Webster online, a semaphore is "a system of visual signaling" that involves manipulating the position of flags held in both hands in order to convey a message. The definition also extends to "an apparatus for visual signaling (as by the position of one or more movable arms)," such as one that would be used on naval vessels. 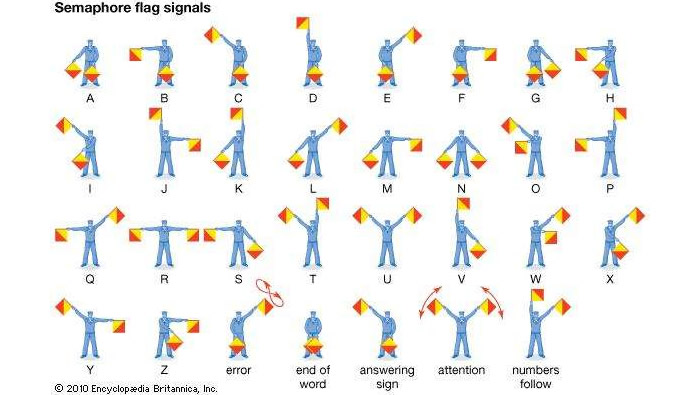 Often, instances of this particular type of communication fall under the "flag semaphore" umbrella, as flags have historically served as the foundation for semaphore telegraphy. On a basic level, flag semaphore communication involves 30 different positions which each correspond to letters, numbers, or rests in a given alphabet. With the assumption that both sender and receiver will understand the meaning of each position, the sender could manipulate the position of the flags to send messages over a long distance well before the days of electronic communication.

What's A Sema For?

Outside of the literal definition of semaphore, Sea of Thieves players who have arrived at this page are likely looking to understand more about the game's Quest of the Golden Banana. The first clue pointing toward the end of the game's promotional event was posted over on Instagram, where a video of a monkey chowing down on bananas lead to a clue written on an old piece of parchment. 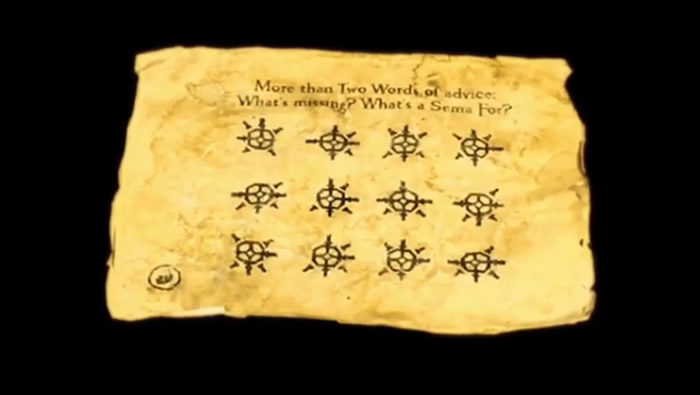 Here, users can see writing that says the following: "More than Two Words of advice. What's missing? What's a Sema For?" Underneath the clue, a series of twelve symbols belay information not yet made clear. However, players who are now familiar with flag semaphores should be able to put the clue together. For those who prefer the information up-front, the symbols spell out the following clue: FIRST OUTPOST. Don't worry: we'll break down more of these clues and exmamine what they may mean in the following hours and days.

Are Flag Semaphores in Sea of Thieves?

As far as we can tell, no, there are no proper flag semaphores in Sea of Thieves. Even if there were, there's no real guarantee that the developer would implement them in any sort of way that resembles classic semaphore communication. If the development team did introduce a type of semaphores, their system might be drastically simplified, even to the point where there are only a handful of different positions and meanings.

Do we think semaphores will eventually come to Sea of Thieves? Maybe. The crew at Rare certainly seem interested in providing players with a reasonably true-to-form pirate experience, and outside of standard in-game communication, it may be that the developers will eventually include a system where players could signal to one another across distances, even if they don't necessarily know the full scope of traditional flag semaphore communication.

Until then, however, semaphores in Sea of Thieves represent another cool feature that would probably be meant specifically for fans well-steeped in naval lore. There's no telling where the virtual waves will take players looking forward, but we do know that budding pirates who want to make the most out of their adventures would do well to check out our Sea of Thieves walkthrough and guide.