One of the hottest smartphones on the market right now is the Google Pixel 2, the latest and most fully featured handset from the tech giant. Among many high-profile components and features is the device's operating system, namely the latest version of Android, the 8.0 release codenamed Oreo. Over the past few weeks and even months, many Pixel users have been reporting the availability of over-the-air or OTA updates bringing the phone up to Android version 8.1.0, and Google has finally released an official list of the bug fixes, changes, and updates that users will notice in the latest build.

Mobile operating systems are always being refined, and Android Oreo is certainly no exception. Much of the update has been specifically focused around Nexus and Pixel handsets — Google's own devices, if you will — and as such, Nexus and Pixel users will likely be the ones most interested in seeing what changes are incoming.

By and large, the bulk of the Android 8.1.0 updates focus on performance: mobile data, power, battery life, cameras, and Wi-Fi connectivity have all been tweaked in some manner or another. On the more broad side, Google has also worked on app compatibility by improving RSA key parsing from byte arrays. To see all the specifics, users can head over to Android's own Pixel/Nexus security bulletin page; alternatively, check out the chart below to scope out the latest changes. 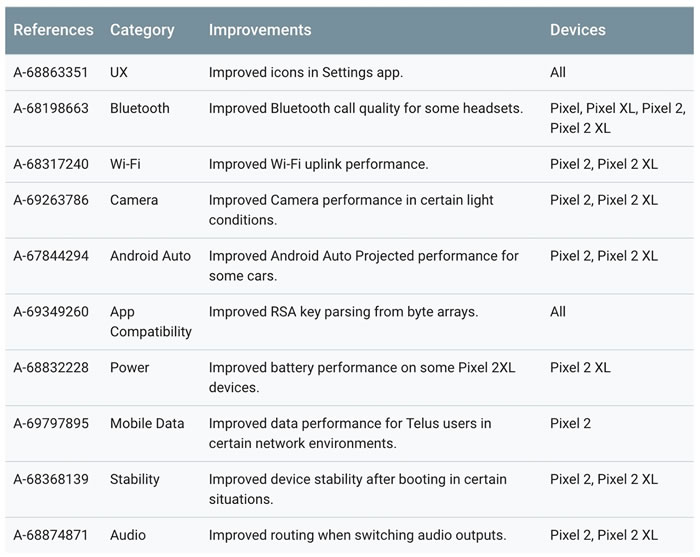 The latest Android update version 8.1.0 is still being rolled out to users' devices, so there's a chance that there are still some running the older version of Android Oreo. Fortunately, Google hasn't made note of any instance of users being affected by security issues, which is good news following word of potential CPU vulnerabilities revealed by the company's own Project Zero late last year.

Users who are interested in learning about Android updates that aren't specific to the Nexus or Pixel platforms should by all means head over to the Android security bulletin page, which features details on various stages of the Android OS dating back to 2015.