Hot off the excitement of one of the biggest sporting events, SIE San Diego Studio and Sony dropped the first gameplay trailer for the PlayStation exclusive MLB The Show 18. There are only a couple months before launch, but fans are getting a chance to see the enhanced visuals and a sample of new features before the game arrives March 27.

The new trailer and some details appear on the official PlayStation blog. Ramone Russel, San Diego Studio's Sr. Community Specialist, expresses that baseball "is a game of details. At its core there’s pitching, hitting, catching, throwing, and tagging. All of those areas of the game have received major development resources this year." The following features are highlighted in this 2018 edition of The Show:

Continuing the press run up until the launch, the developers will be hosting a handful of streams before those that pre-order get early access on March 23. In addition to early access, preordering at specific retailers will net you different goodies. The blog included this nifty chart so you can get what you want: 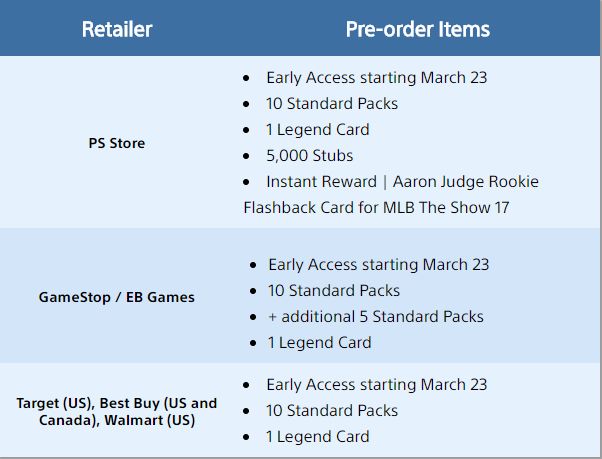 Stay tuned for more updates on MLB The Show 18 and prepare to rush the digital mound on March 27 (or March 23 with early access) on PS4.