Tracking down and slaying monsters is relatively easy in Monster Hunter World, but hunting monsters effectively is what separates the good hunters from the best hunters. A part of becoming the best hunter you can be is learning a monster’s weaknesses.

Whenever you encounter a monster in Monster Hunter World, you will make a note of it in your Hunter’s Notes, under the Monster Field Guide sub-section. In this section, you will begin to learn more about that monster, you’ll be able to track it better, see its breakable sections, see what you can harvest from it and its rewards, and learn its strengths and weaknesses. When you first start out, however, it can be a bit difficult to understand what all the stars, crosses, and marks mean in the journal. Keep in mind that when you first begin, only the Low Rank rewards will be shown, you must unlock the High Rank content to be able to see the High Rank rewards!

Let’s use the entry below of the Barroth as the example. Here you can see the four breakable sections (head, arms, feet, and tail), but only two of them are weak points, the arms and tail. The arms are weak to sever, blunt, and ammo damage, all of which are 3-star effective. Meanwhile, the tail is the only severable section (meaning it can be cut off), and sever damage, blunt damage, and ammo damage are only 2-star effective. 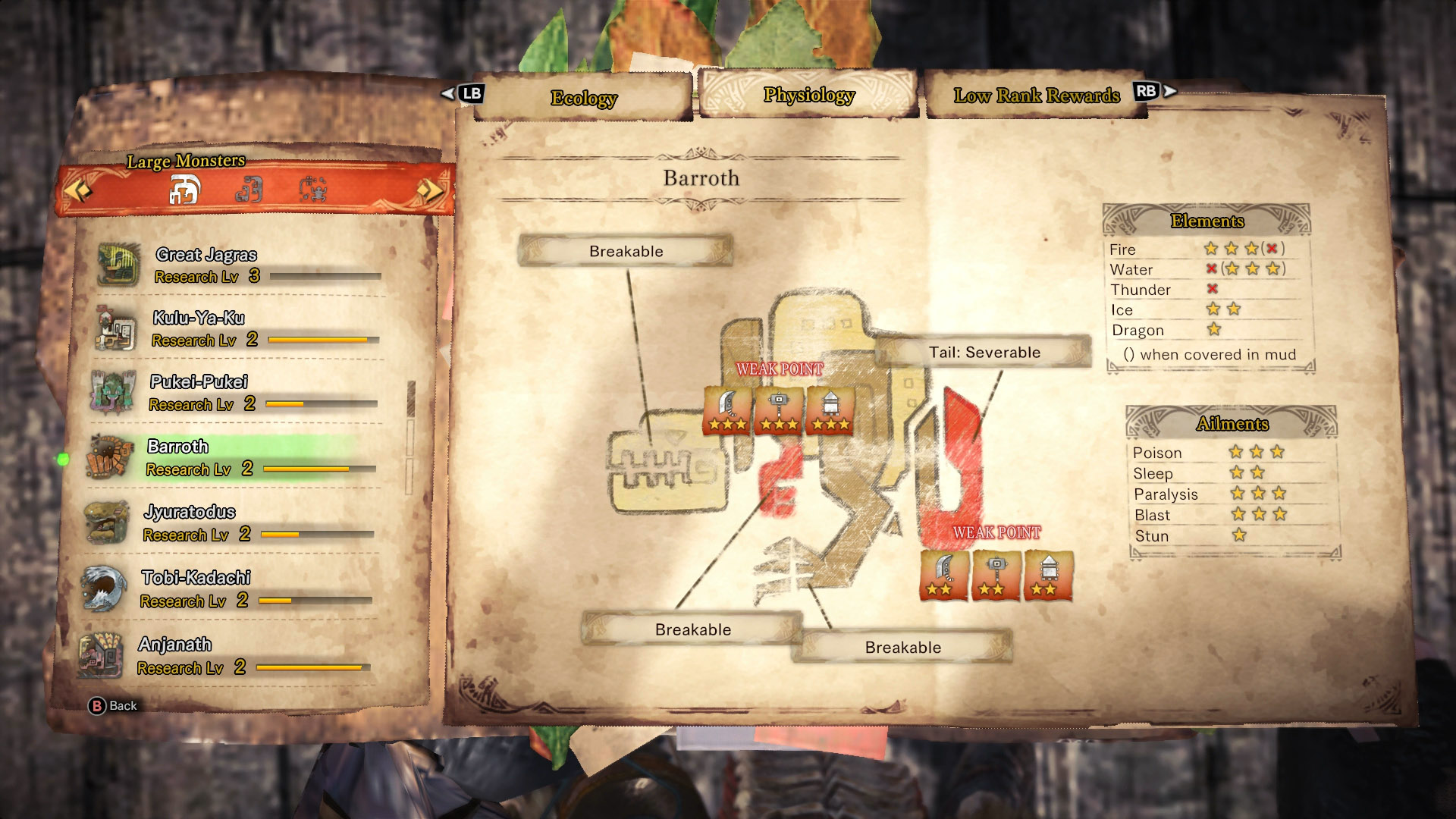 Over on the right-hand side, you can see two tables consisting of Element damage and Ailment damage. As you progress through Monster Hunter World, you will be able to infuse your weapons with different elements or ailments, depending on your playstyle and what you wish to use against a monster.

Much like the Elements table, the Ailments table shows you how effective certain ailments are against the monster. The Barroth is extremely susceptible to Poison, Paralysis, and Blast damage, while Sleep is some-what effective against it and Stun is only slightly effective. Ailments aren’t damage-focused, meaning their effects are utility-only – except for Poison.

Using the above information you can see that if you wanted to deal a lot of damage to the Barrath, you should attack its arms with a fire weapon when not covered in mud and a water weapon when it is covered in mud. It’s also vulnerable to poison, meaning it gets poisoned extremely easily. 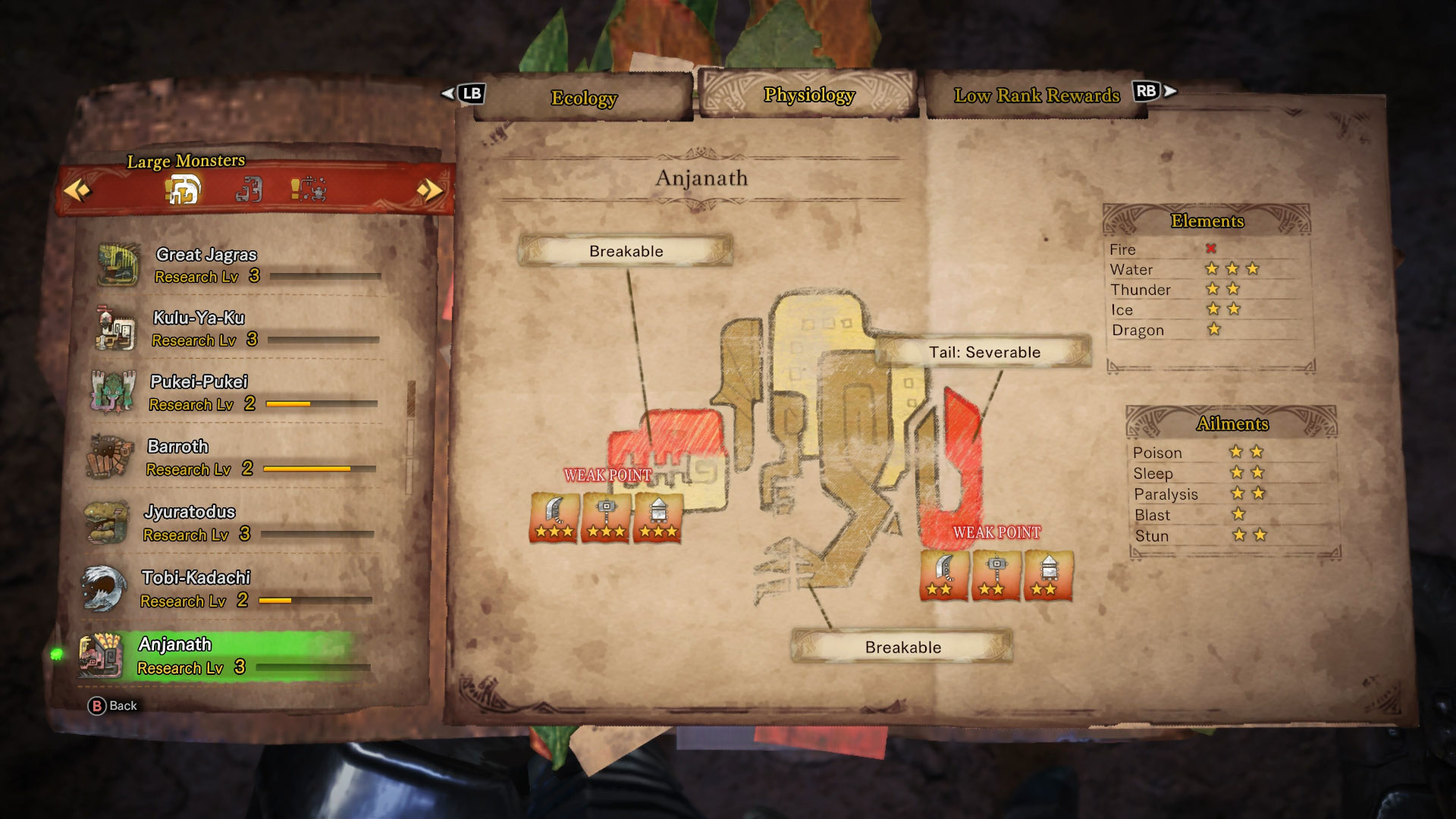 The Anjanath is a difficult beast to slay the first time around, so be sure to check out our guide on how to kill the Anjanath if you’re having difficulties. The top of its head and its tail are the weak points, but you will want to focus its front end. It is completely resistant to fire, so don’t bother. Try to use water on the Anjanath and any ailment except blast, which only offers a 1 star rating. 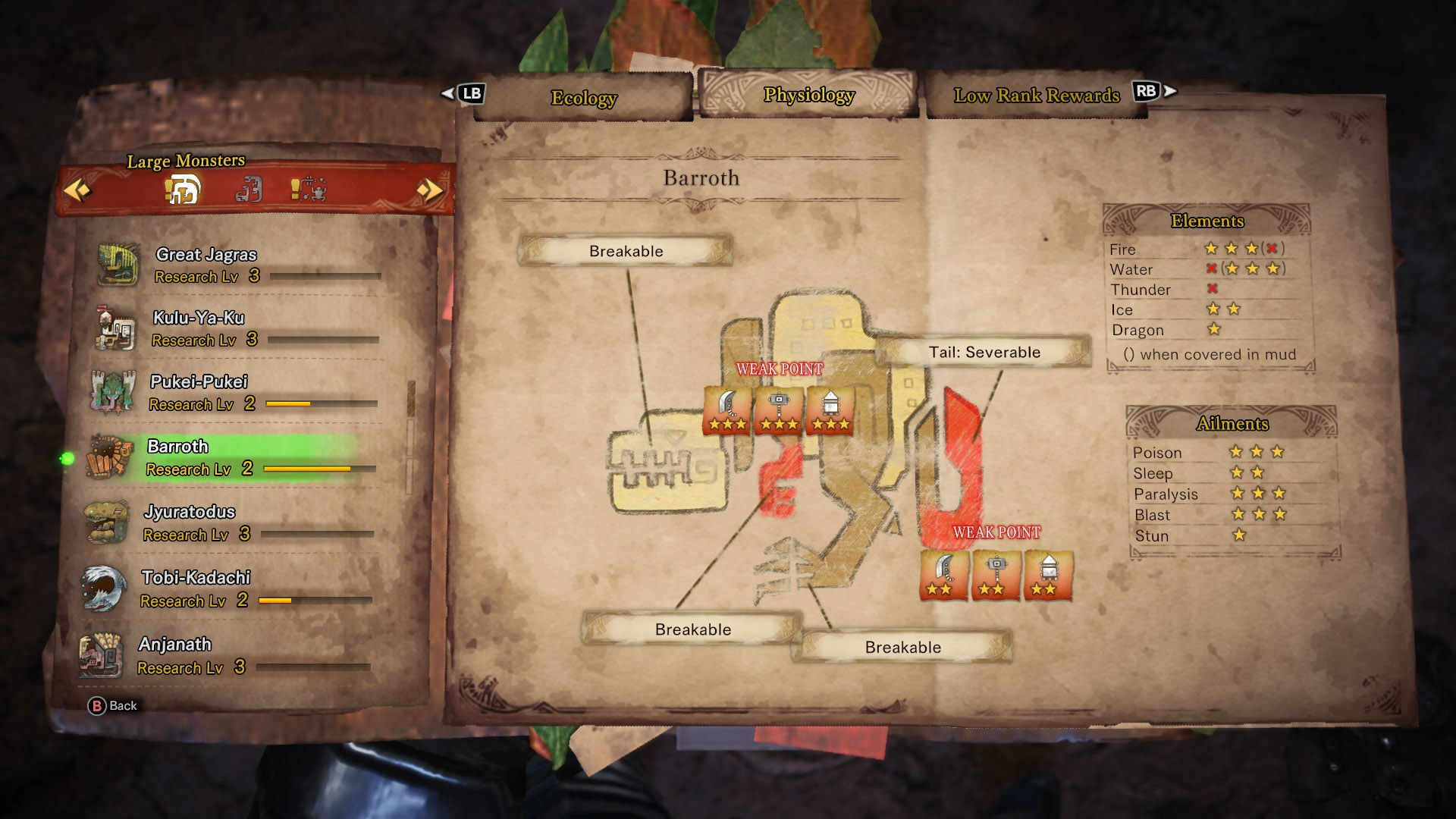 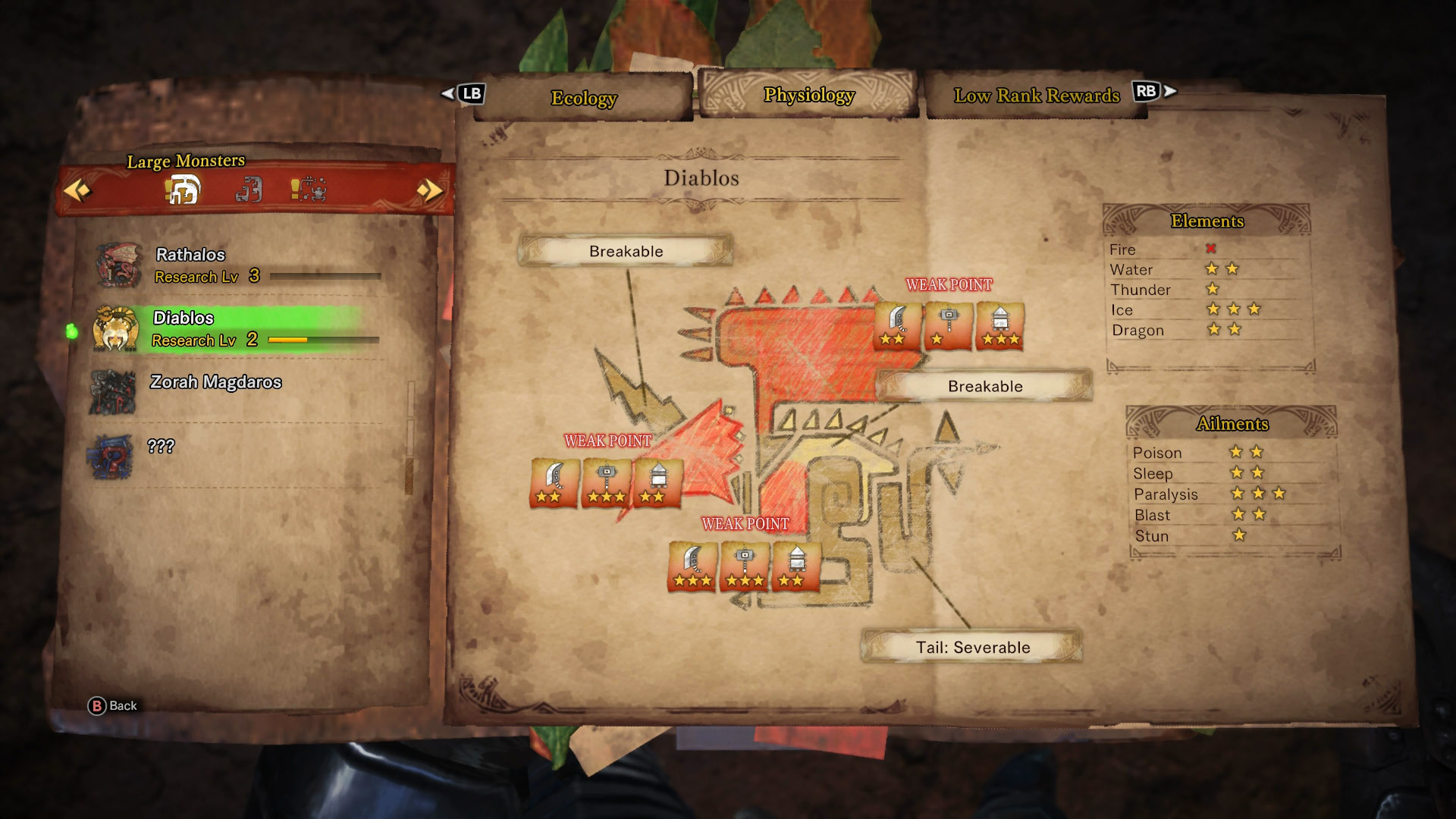 When you first encounter the Diablos, it will feel like it is resistant to everything, but it does have some weaknesses to exploit. The weak points you need to focus on is its head (not its horns), its chest area, and its wings. However, it is a little more nuanced than that, as you can see from the image. Blunt weapons are most effective against its face and chest, while sever weapons are better used against its chest, while ranged weapons are better off attacking the wings. The Diablos is resistant to fire, but ice-based weapons will mess it up, as will the paralysis ailment. 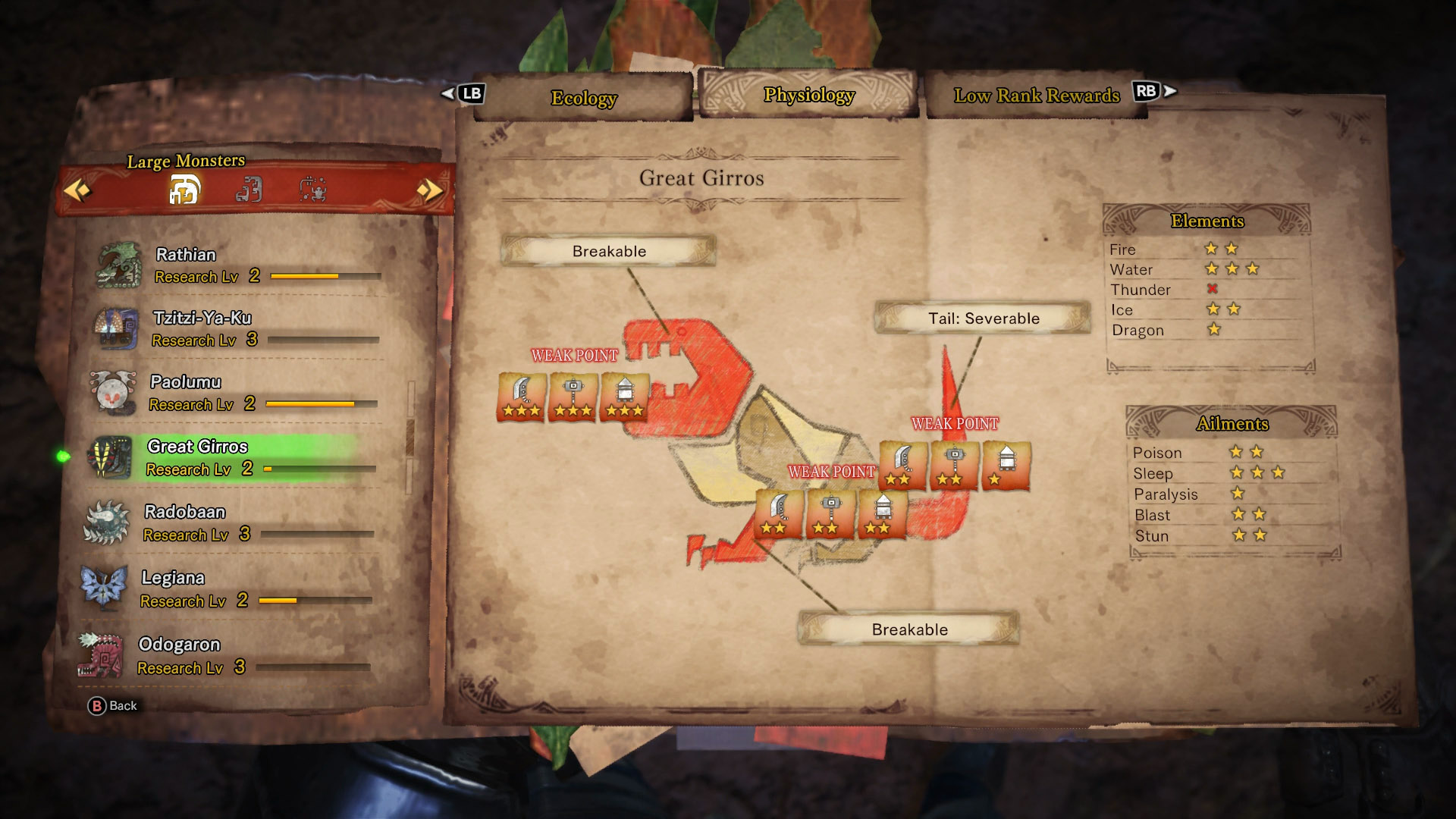 The Great Girros of the Rotten Vale offers three main weak points in its head, forearms, and tail, though you should focus entirely on its head. It is resistant to thunder element, while water and sleep deal significant damage to it. The Great Girros also has a severable tail, just in case you need that material for upgrades. 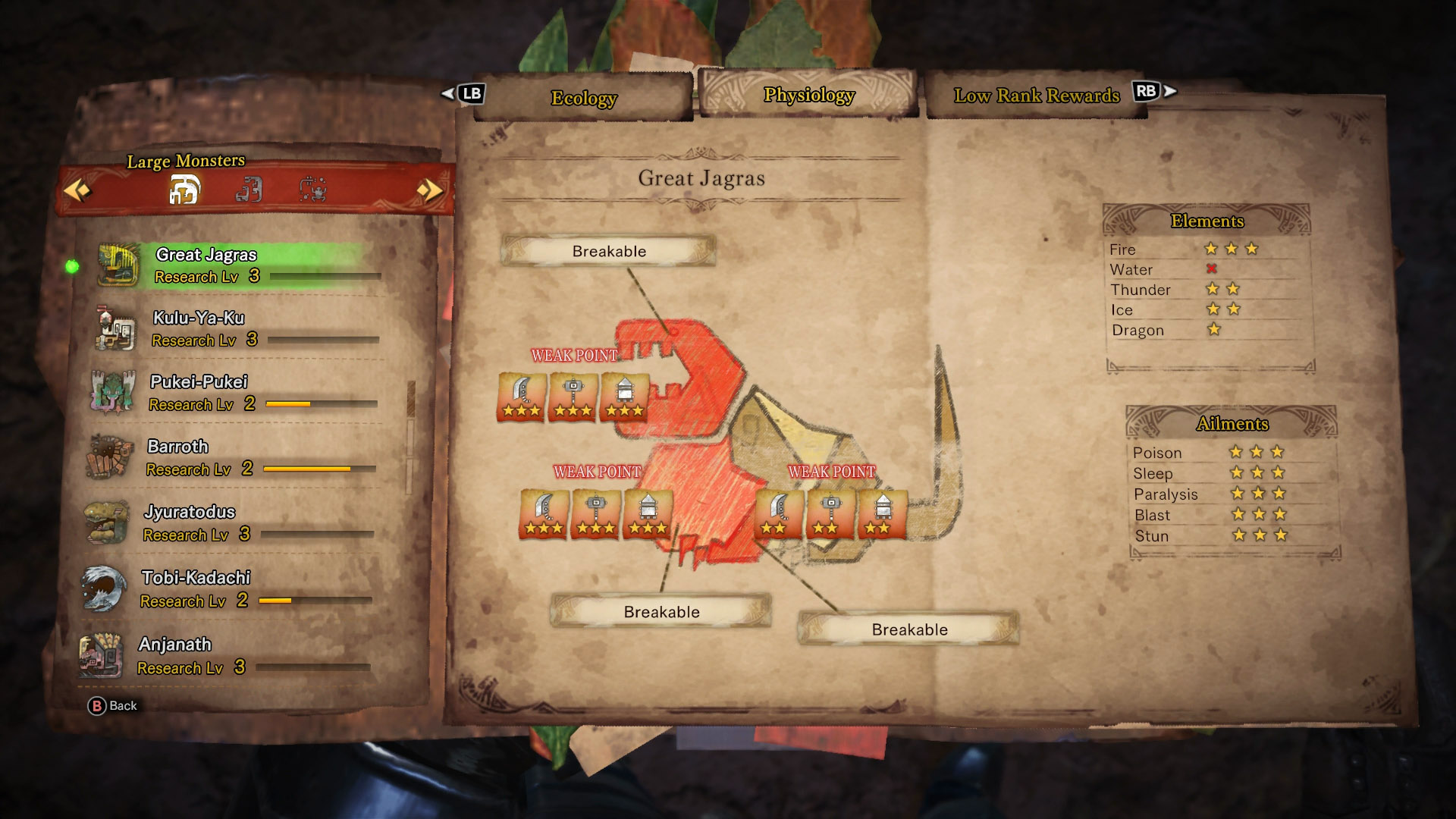 The Great Jagras’s main weakness is its head, stomach, and front arms. The head and stomach are by-far the weakest, as each weapon type has a 3-star rating. Fire is the most potent element to use against the Great Jagras, and it is completely invulnerable to water. As for ailments, the Great Jagras is extremely vulnerable to everything. 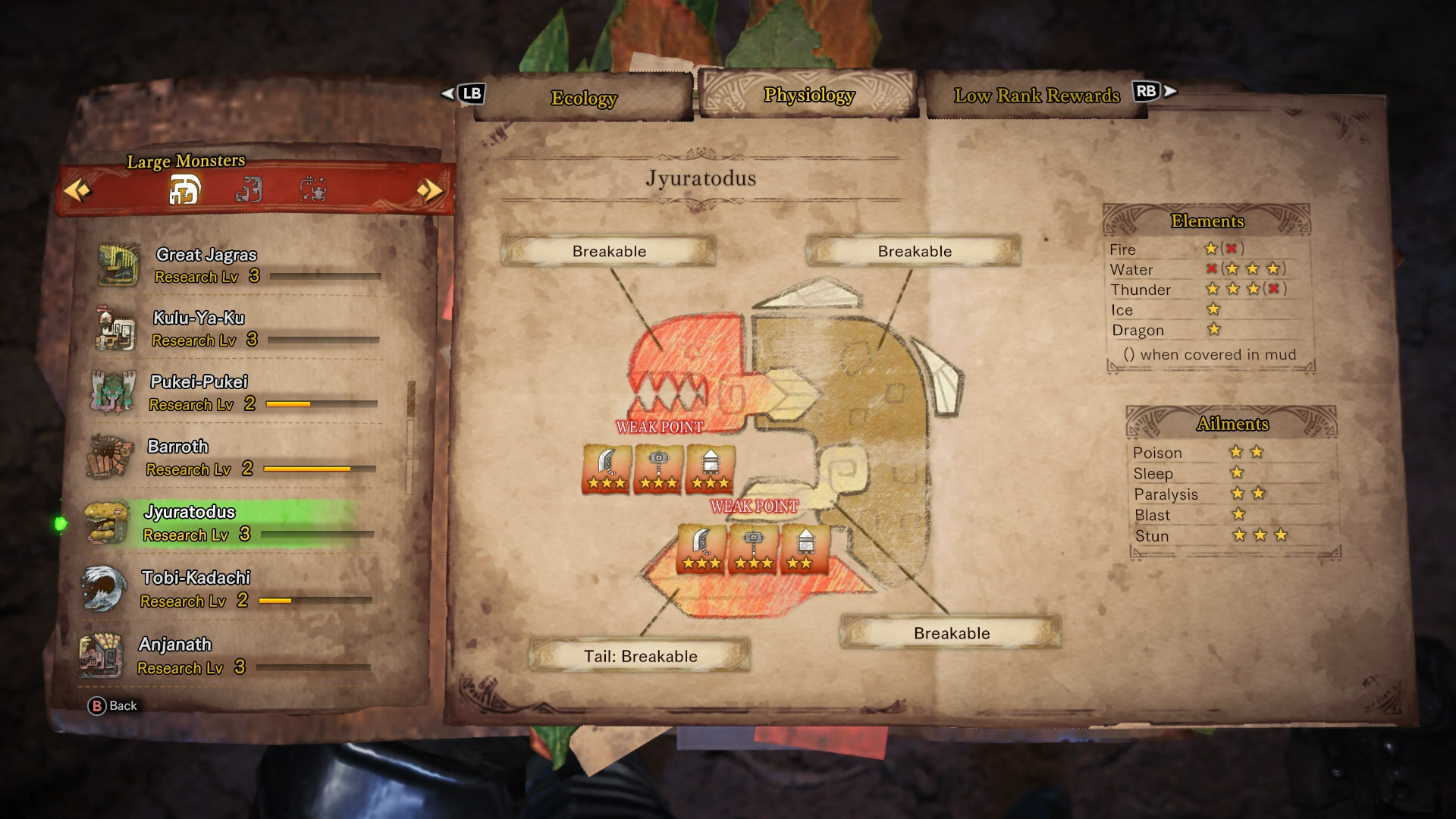 Much like the Barroth, the Jyuratodus has two different states involving mud. Both the Jyuratodus’ head and tail are weak points, with the tail being severable. However, the ranged weapons are only 2-star effective against the tail. The Jyuratodus is immune to fire and thunder when covered in mud, but extremely vulnerable to water. When the Jyuratodus is clean, it is resistant to water, but thunder is the most effective. The only ailment that has a 3-star rating is Stun, so consider using that type when farming Jyuratodus. 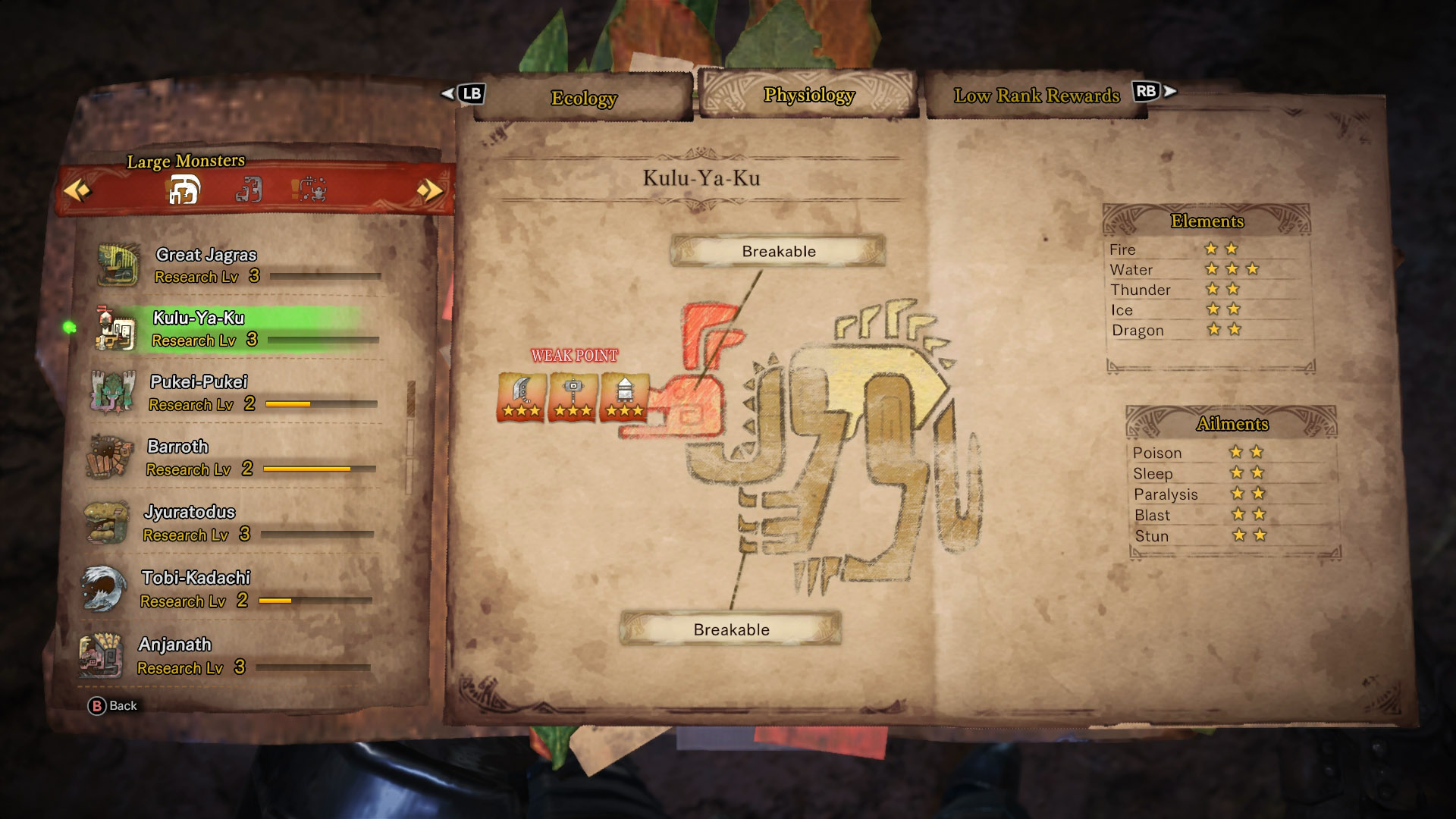 The Kulu-Ya-Ku only has a single weak point on its entire body, and that part is its head. Every weapon type has a 3-star rating, while water is the only 3-star element. All the other elements are 2-star, so they’re still quite effective. The ailments are also all 2-star, so there’s no major outlier here. 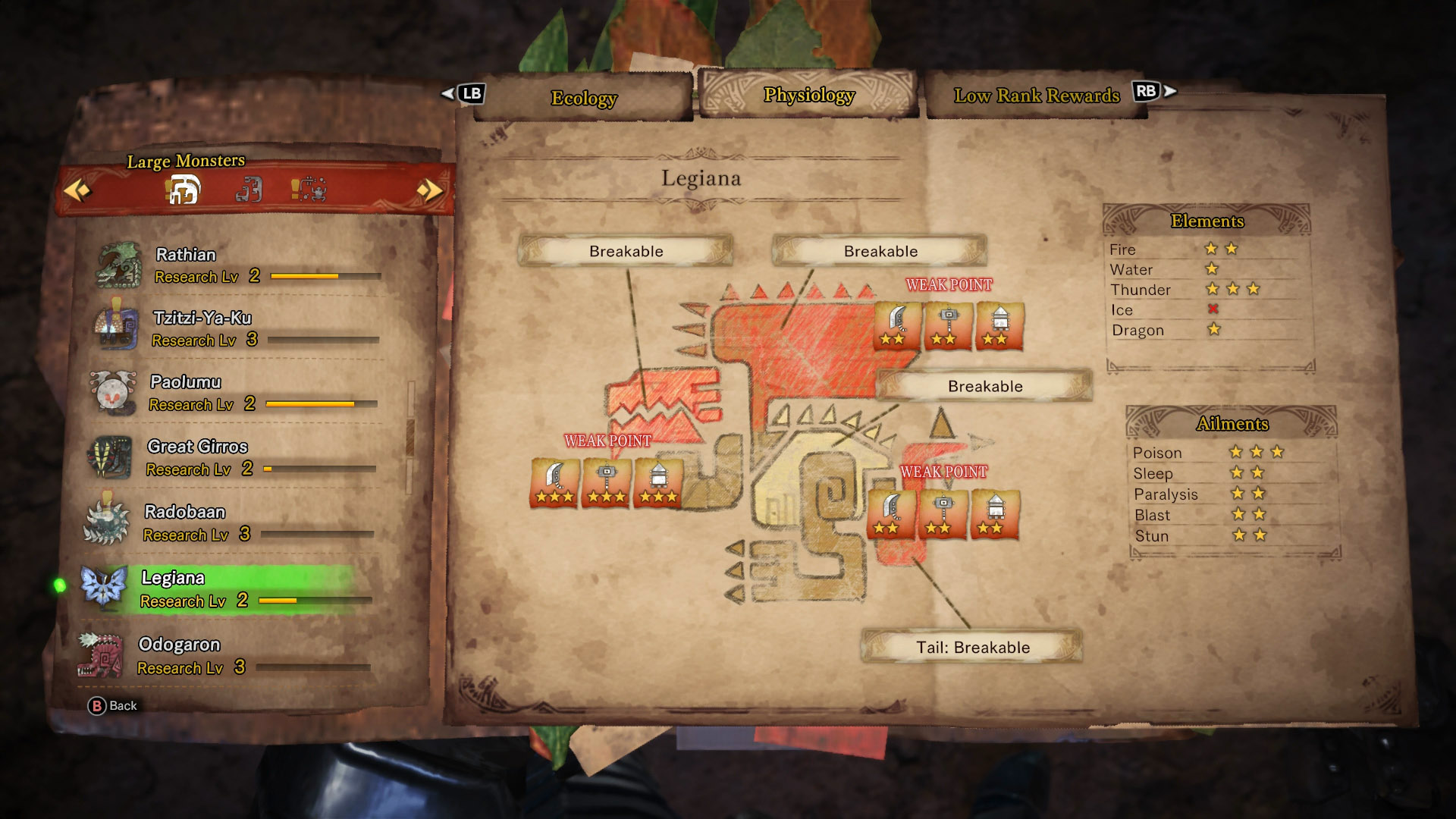 The beautiful Legiana has three main weak points, its head, wings, and tail, though you should try to focus its head. This is a difficult task given it primarily stays in the air. The Legiana is completely resistant to ice elemental attacks, so you should focus instead on using thunder along with the poison ailment. 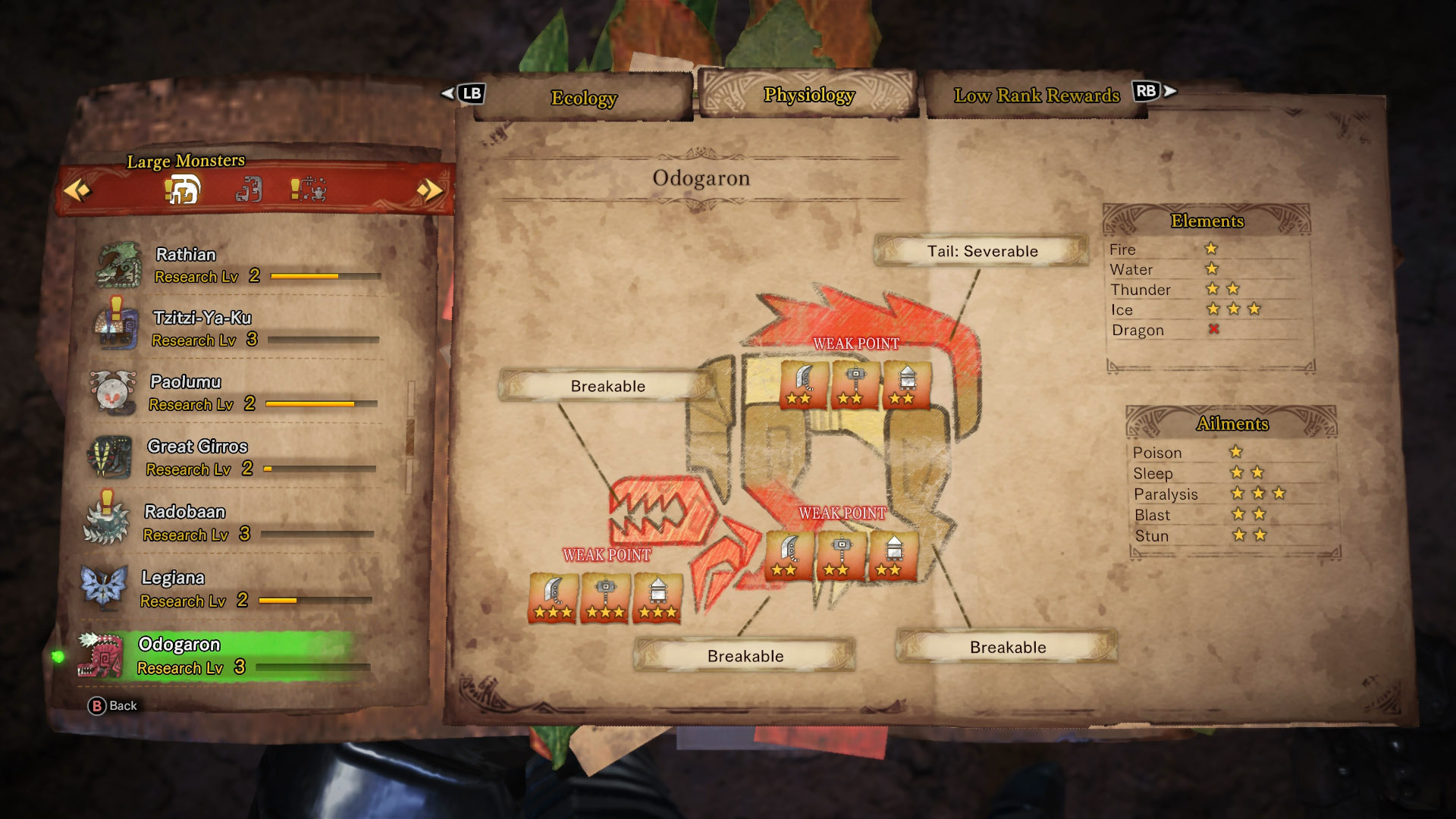 As we covered in our guide on how to kill the Odogaron, it has three main weak points: head, front claws, and its severable tail. Out of these three parts, the head is the most vulnerable to attack, especially if you’re using an ice-based weapon. Dragon-based weapons will do no damage to the Odogaron, while the paralysis ailment is extremely effective and should be employed wherever possible. 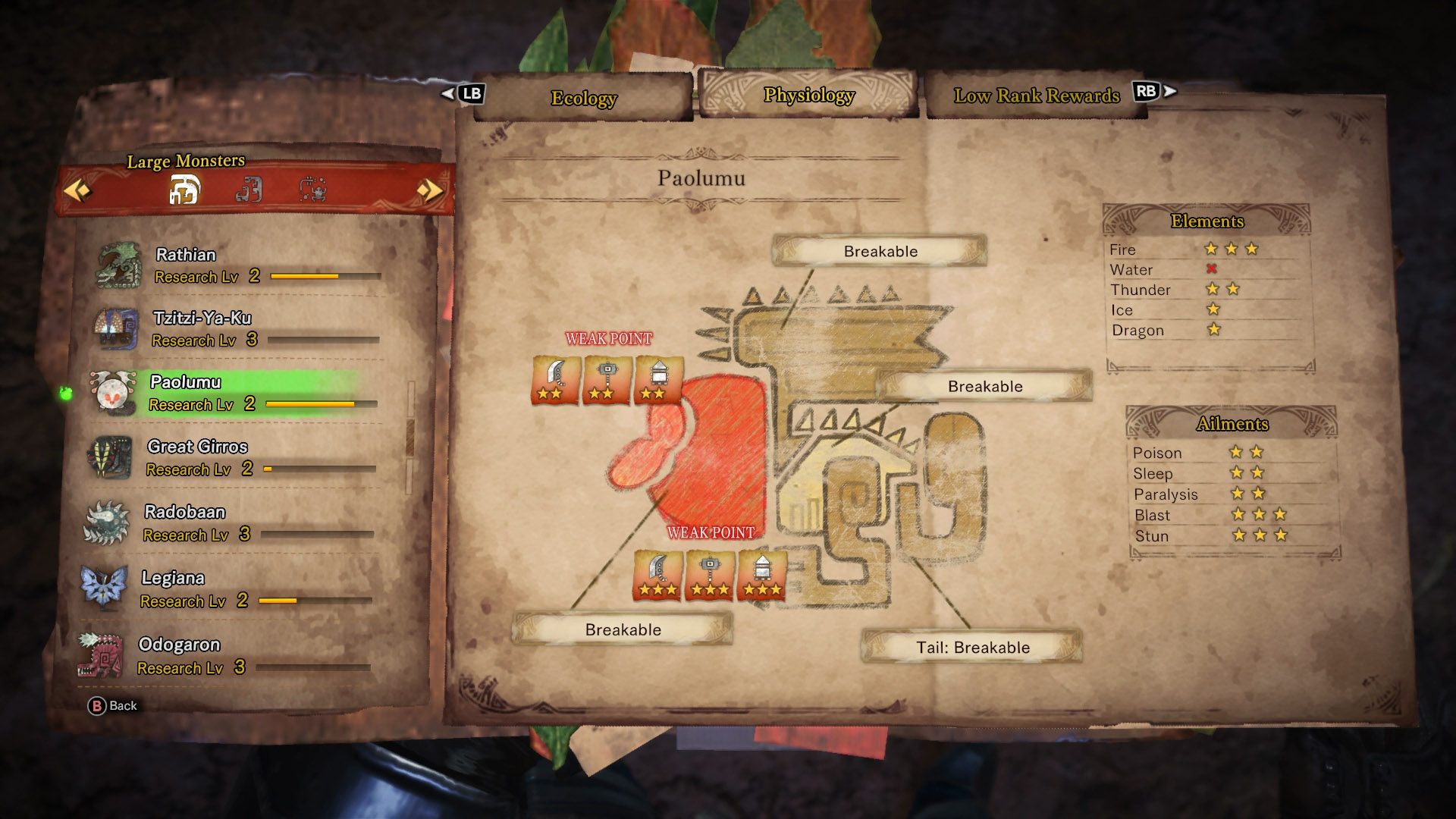 You will come across the Paolumu as you venture into the Coral Highlands, and this bat-like creature has two main weak points: its head and its puffy neck. The neck is the main weak point, so it can be worth trying to attack it when it inflates. As for the elements to use and avoid, the Paolumu is resistant to water but weak to fire attacks, and the blast and stun ailments deal tremendous damage to this flying monster. 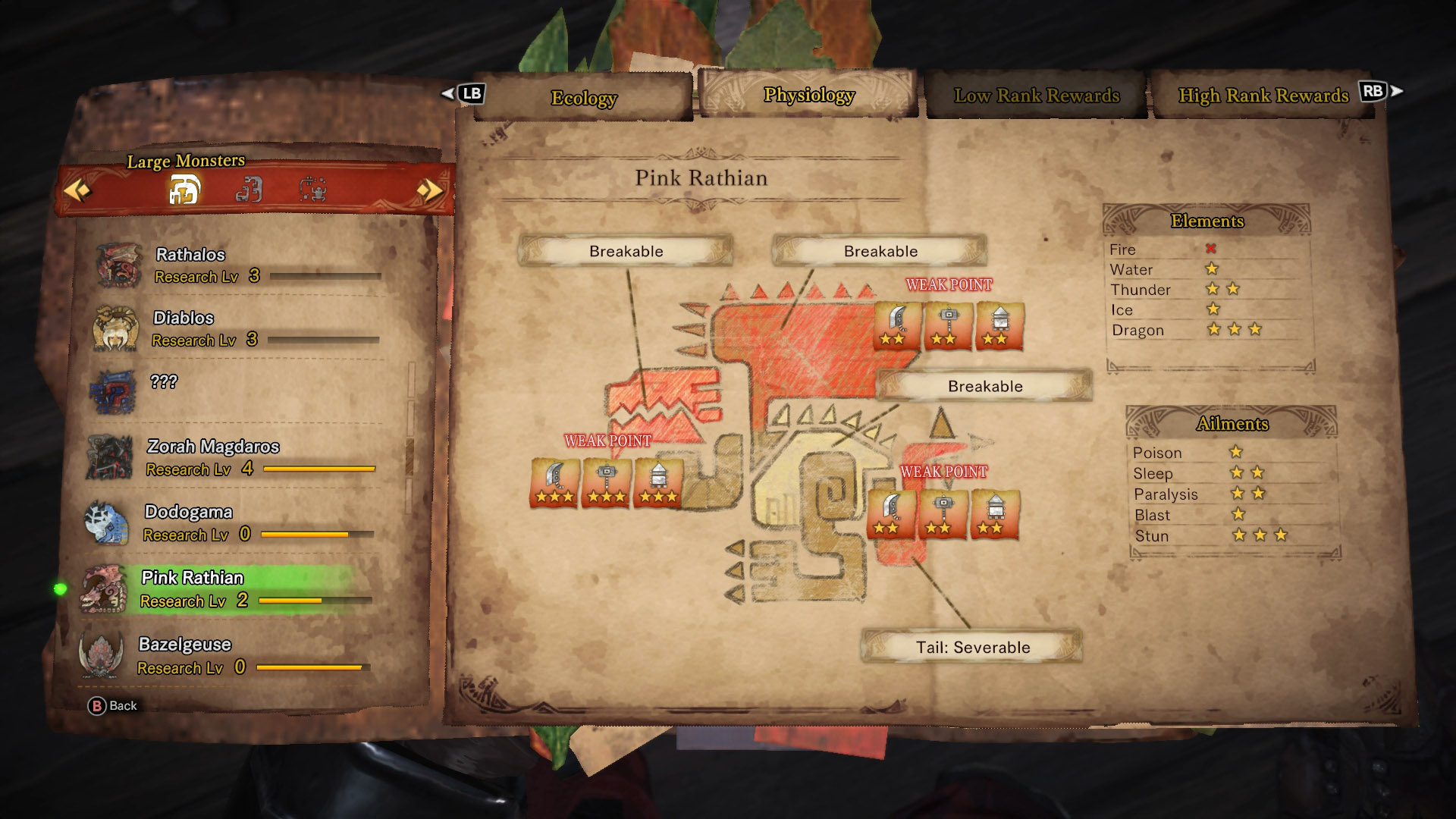 The Pink Rathian is encountered during the ??? Rathian quest. The main weaknesses of the Pink Rathian are dragon and thunder, while it’s quite weak to stun ailment, and reasonably weak to sleep and paralysis. It has a few main weak points that you can focus: the head, wings, and tail, with the head being the most vulnerable. 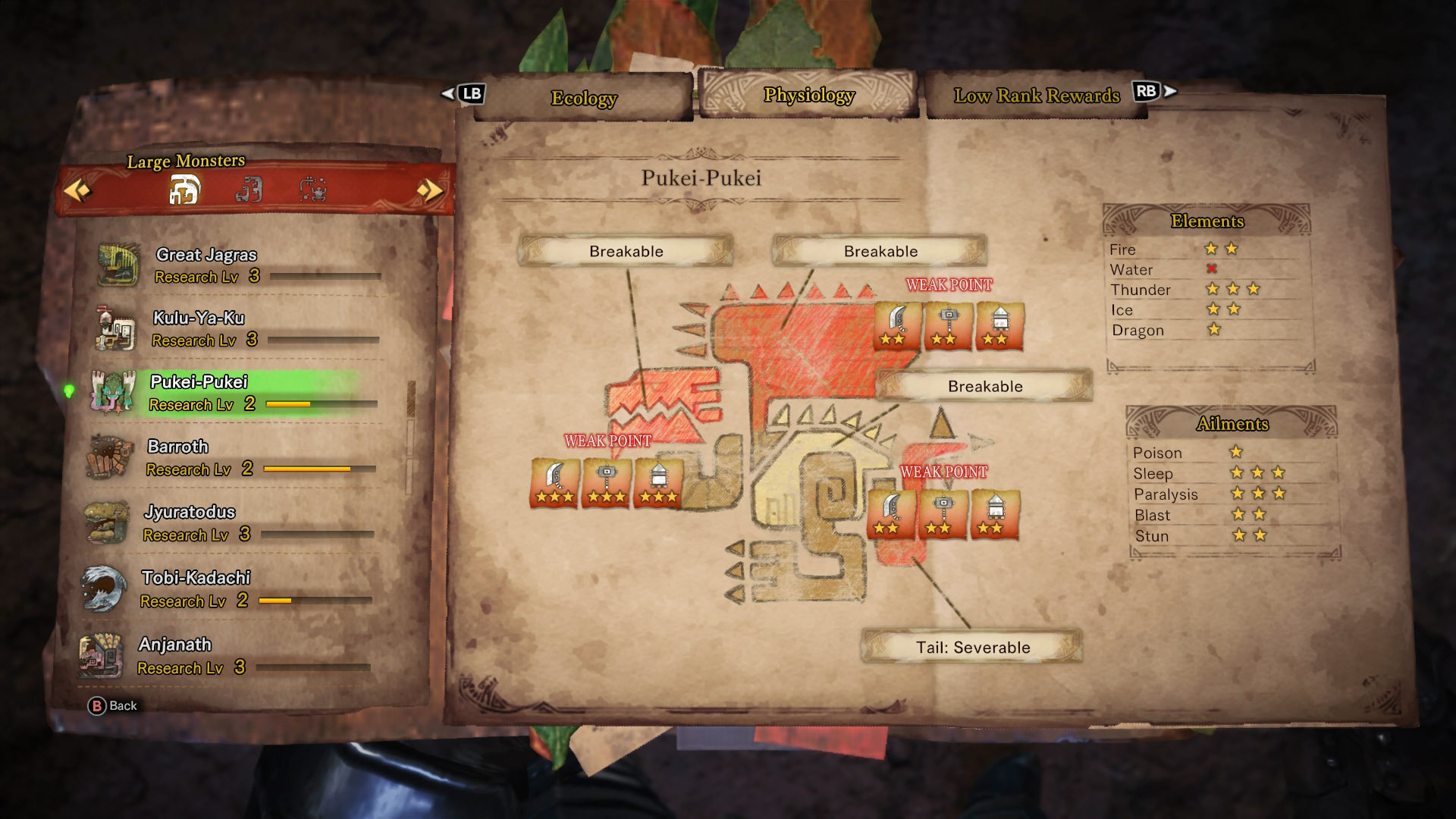 The Pukei-Pukei offers a few weak points to choose from, but its greatest vulnerability is its head. Hits wings and tail are also weak points, with its tail being severable. As for elemental damage, you should aim to use thunder and avoid water, while the sleep and paralysis ailments are the most effective. 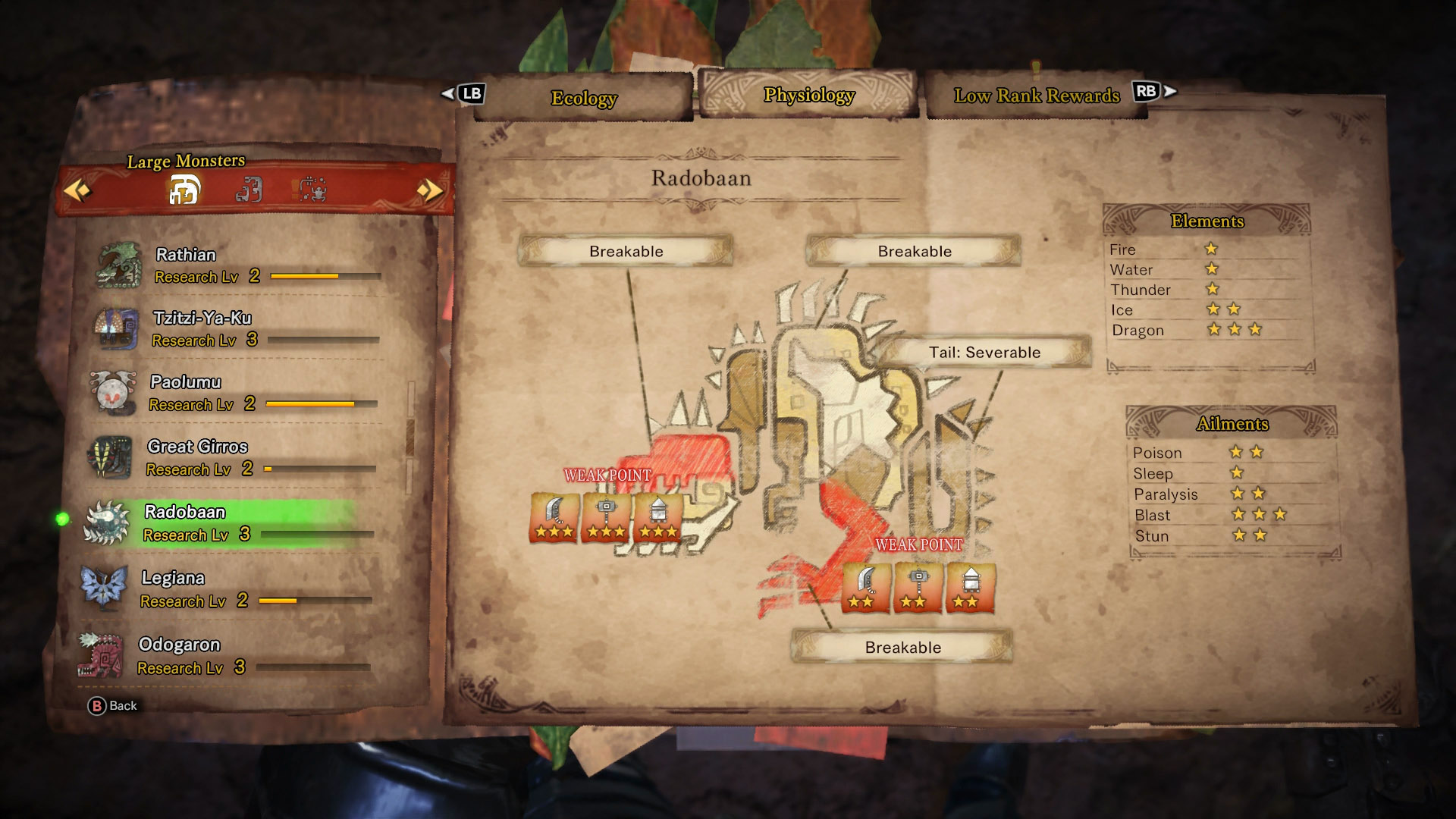 The big ball of bones known as the Radobaan only has two weak points, the top of its head and its back legs, and while it is not a weak point, its tail is severable. This monster can shrug off almost all the elements, though dragon is the most effective with 3 stars. As for ailments, the blast effect has a 3-star rating, so use that if you can. 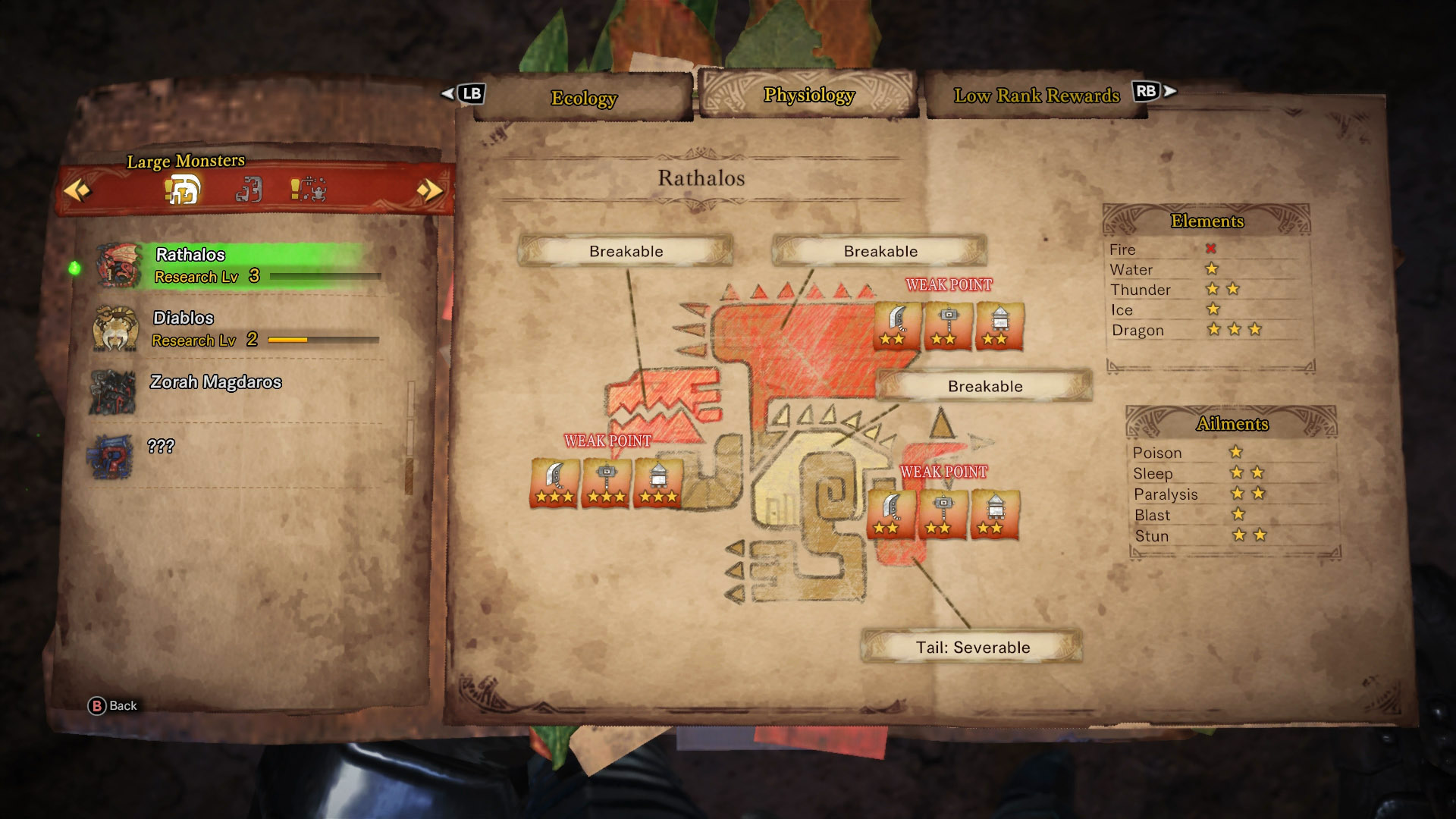 The Rathalos, much like the Rathian, is a challenging wyvern for even the most experienced hunters out there. This beast has three main weak points, its head, wings, and severable tail. However, you should aim for its head to deal the most damage, and if you can, use a weapon with the dragon element. It is resistant to fire, while ice, poison, and blast attacks are only mildly effective. 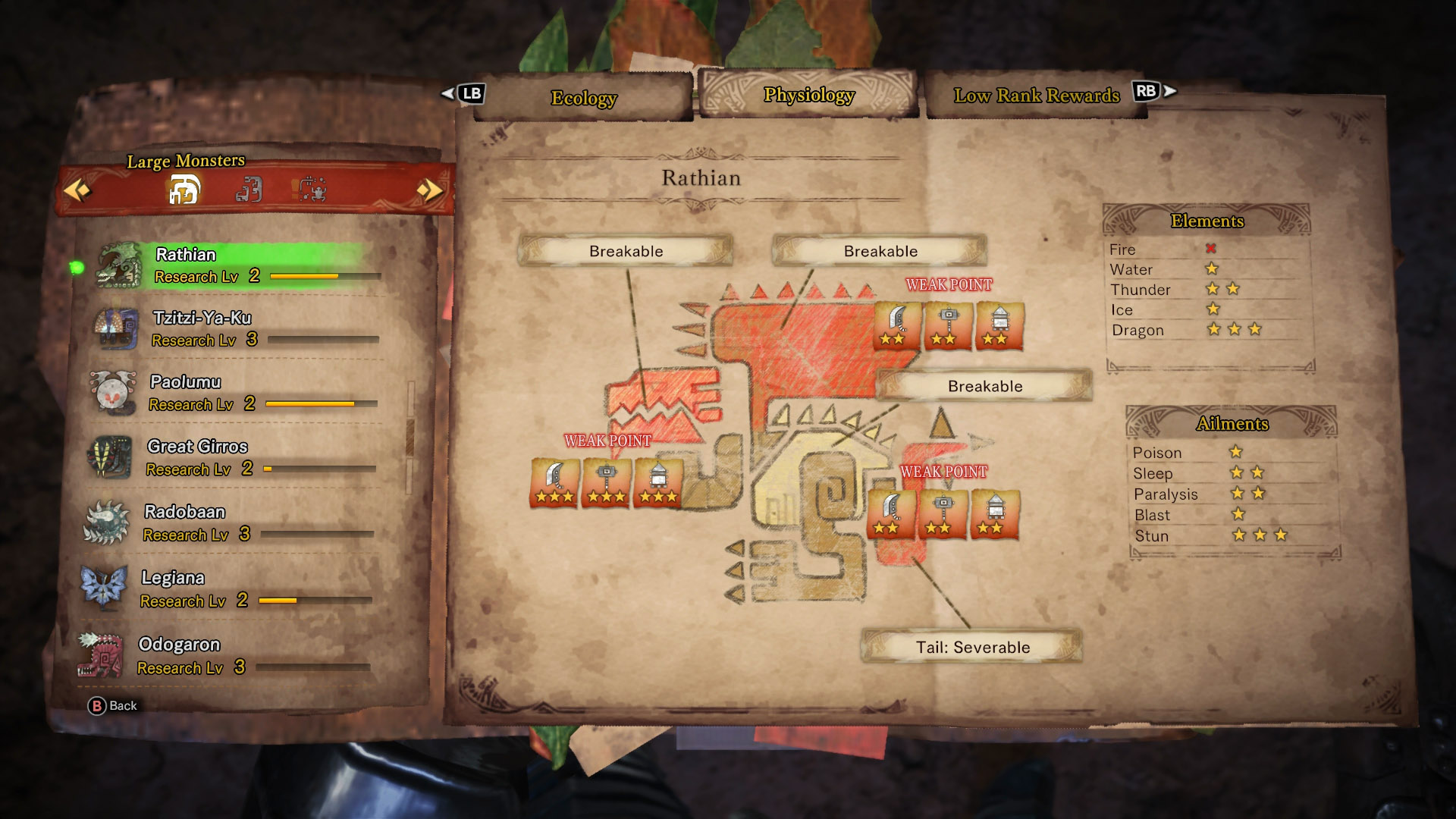 The Rathian can be a terrifying monster to slay, but it has three weak points, its head, wings, and tail – which is severable. The most effective place to attack is its head, using dragon element and stun ailment. It is resistant to the fire element, and as for water, ice, poison, and blast, they are only 1-star effective, so use other means. 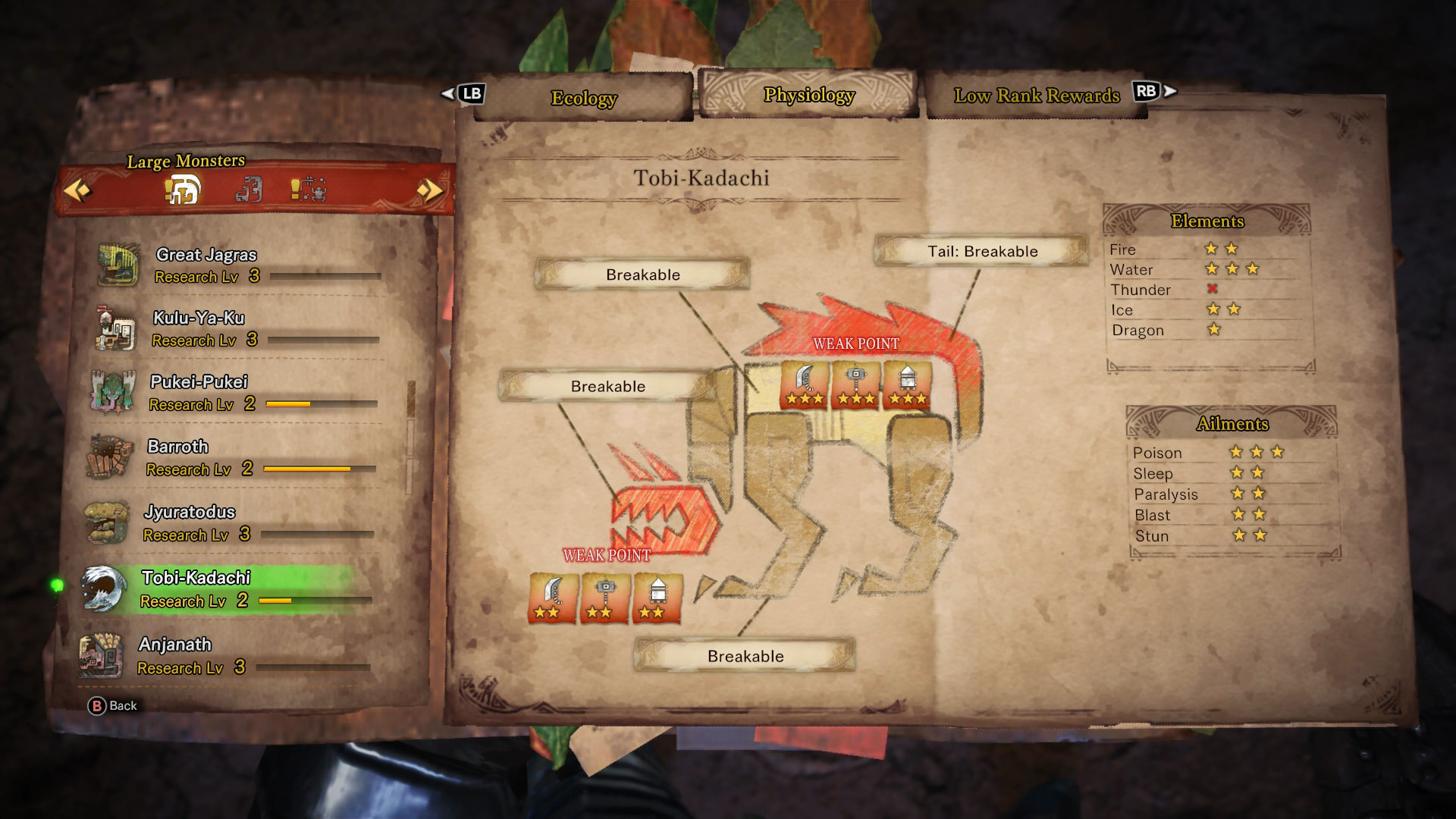 The Tobi-Kadachi’s main weak point is its tail, where all weapon types have a 3-star rating, while its head is also a weak point but weapons only receive 2 stars. Water is the most effective element to use against the Tobi-Kadachi while it is completely resistant to thunder. If your weapon has an ailment, you better hope it’s poison as that is the best one to use, however the others receive a 2-star rating. 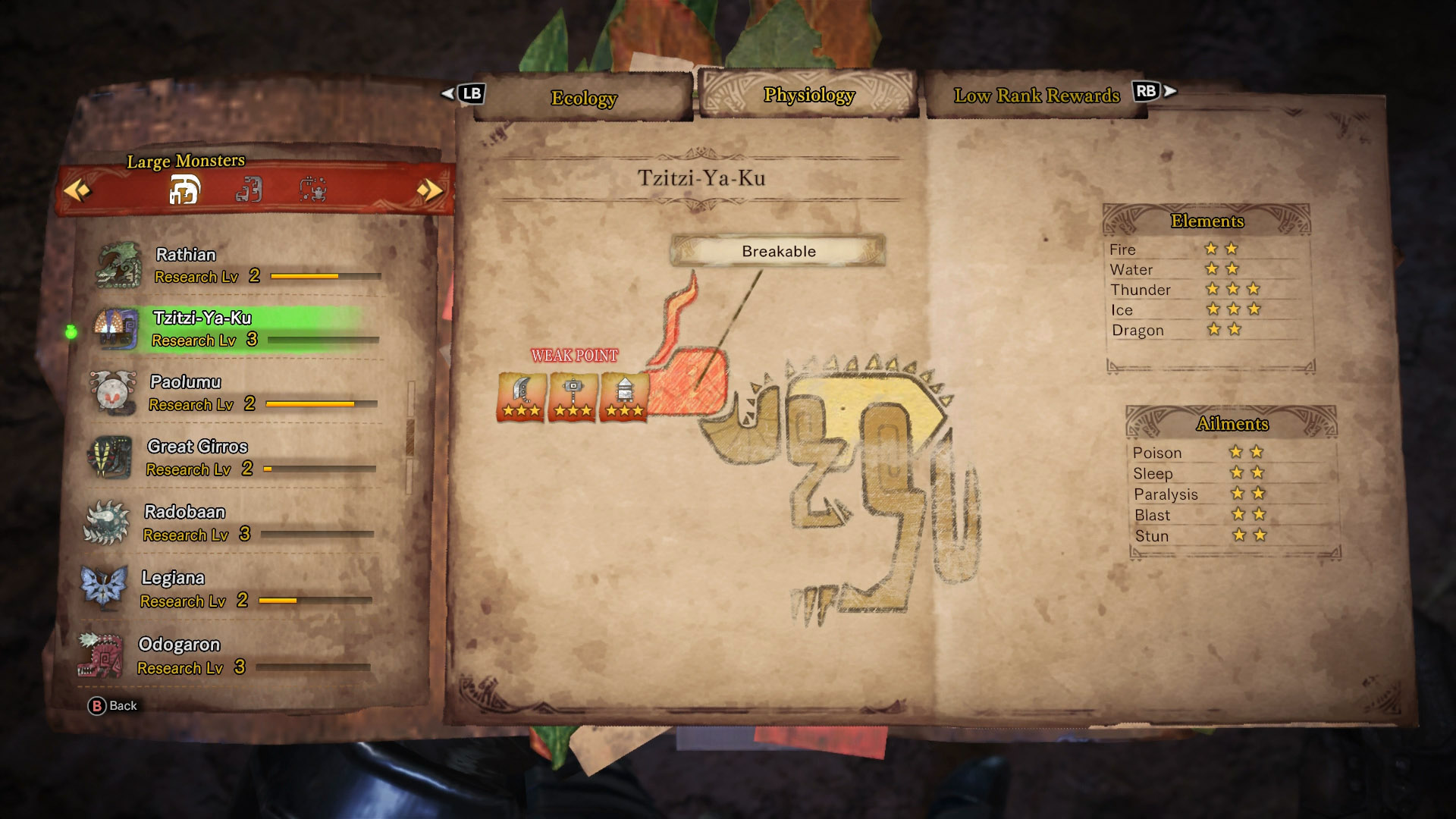 The Tzitzi-Ya-Ku is a frustrating monster to fight in the Coral Highlands if you can’t dodge its stun attack. This becomes tricky given that its only weakness is its head. The most effective elements to use against the Tzitzi-Ya-Ku is thunder and ice, while all the ailments are 2-star effective. 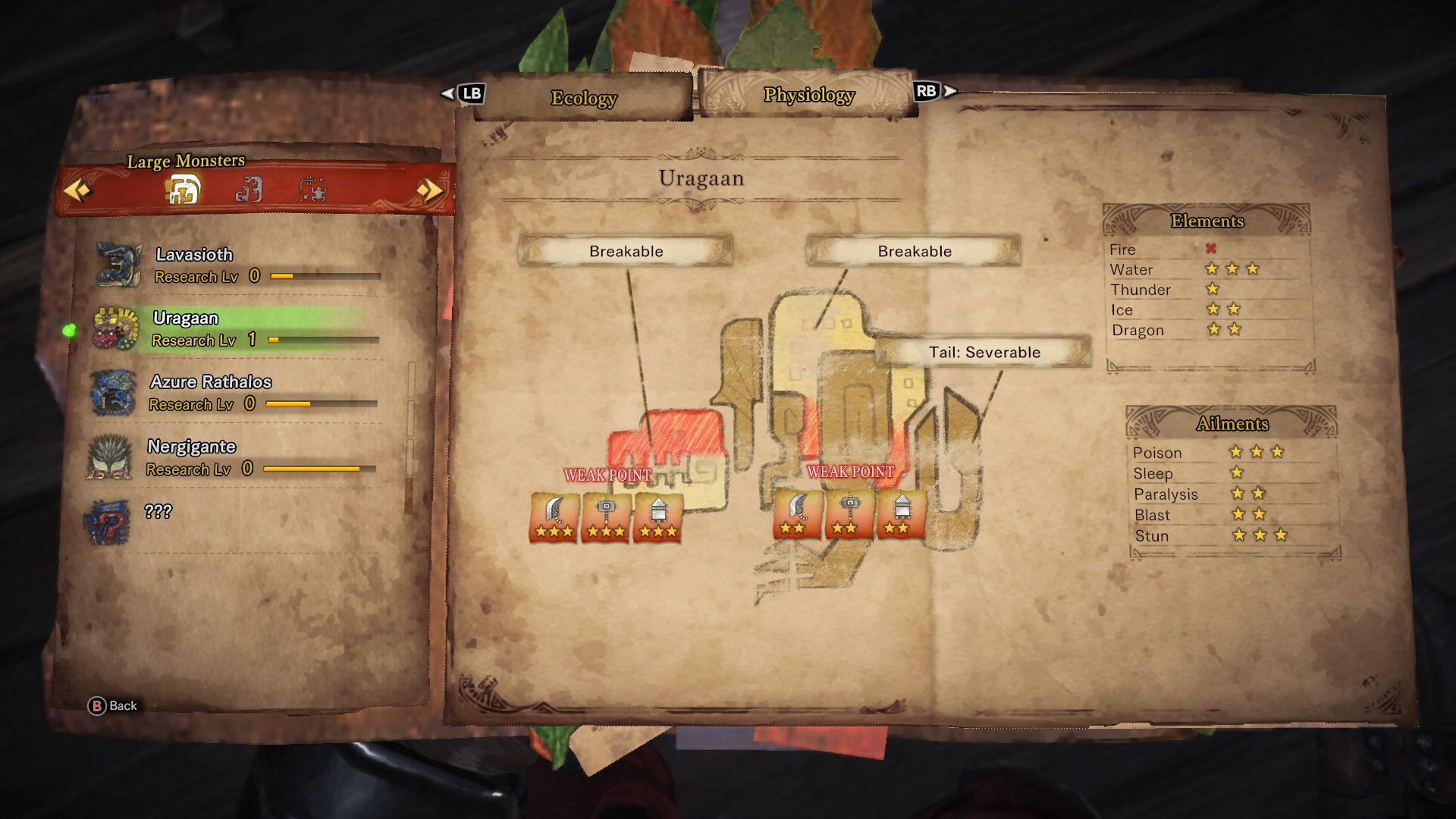 The Uragaan is one of the monsters you’ll find in the Elder’s Recess, and has two main weak points on its body: it’s upper skull and belly. Of these two parts, the head is most susceptible to damage. As for the elements, using water is your best option, followed closely by ice and dragon. For ailments, poison and stun are most effective, followed by paralysis and blast. 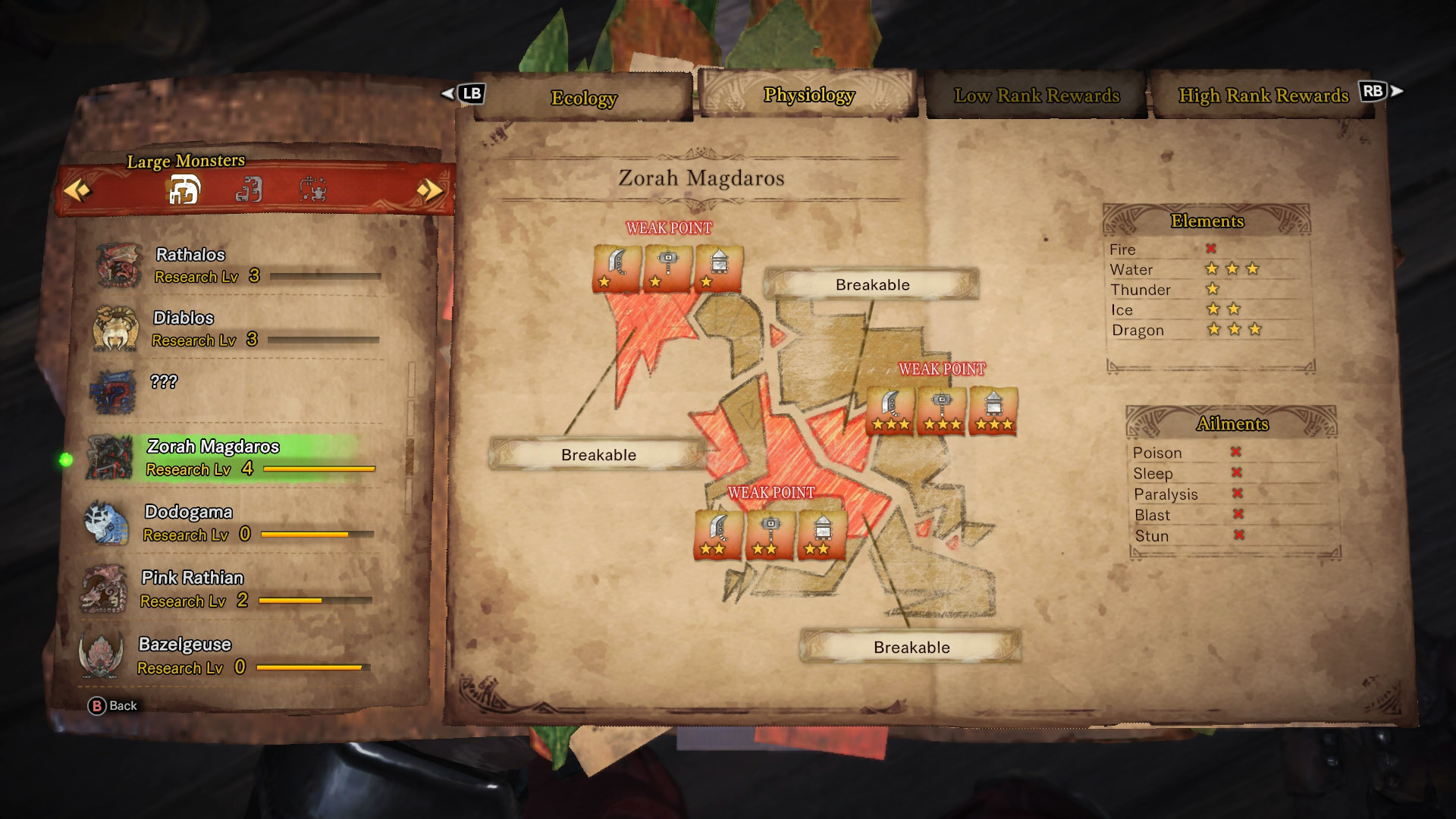 Zorah Magdaros is probably one of the largest monsters you’re going to face in Monster Hunter World, and it’s weaknesses are few. However, this monstrously large creature is extremely vulnerable to water and dragon, as well as ice. Unfortunately for those welding ailment attacks, it is completely immune.

Hopefully this clears up some of the confusion about monster weaknesses, and should help you better read the Monster Field Guide in the Hunter’s Note book. Be sure to check out our Monster Hunter World Guide for more insights into the various mechanics and systems in the game.