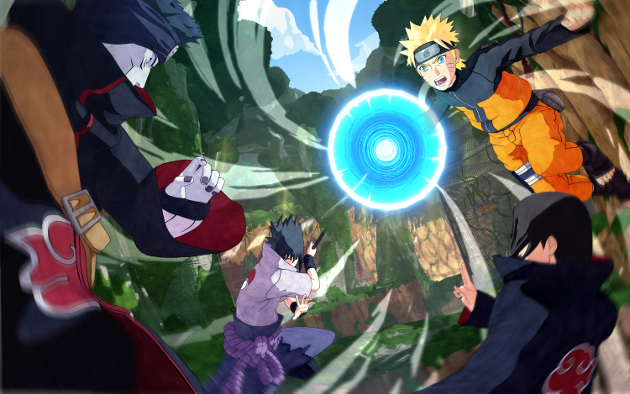 Naruto to Boruto: Shinobi Striker the latest installment in the long-running line of games about everyone’s favorite loudmouthed ninja in a bright orange jumpsuit. Only this time around instead of offering up a solo adventure experience or 2 player fighting game, Shinobi Striker is a 4v4 competitive multiplayer with several gameplay modes. I got a chance to go hands-on with the game’s Capture the Flag mode at a recent press event.

Shinobi Striker separates its characters into four classes: attack, range, defense, and heal. Having a balanced team seems to rely on everyone's willingness to take on a specific role. Each character has two standard abilities with cooldown meters and throwing daggers to augment their regular attacks. Character classes also determine what kind of super a character gets. For instance, Sakura has an AoE healing super because she’s a class, and Naruto can slam a fireball down on an opponent’s head since he’s an attack class. On top of what will likely be a healthy roster of characters from the show to choose from, players will also be able to create custom characters and select their classes.

There was only one level for the demo and it took place in an asymmetrical steep canyon with a few massive tree stumps separating each sides’ home base. Along with the more standard double jump, players can charge up a shocker jump to cover long distances. Everyone is equipped with a grappling hook in case a giant leap of faith comes up short of its mark. Players can also let their arms limply fly behind them as they run on along walls.

Capturing an opponent’s flag is more involved than just running up and swiping it. Players have to stand on the flag’s pillar for a short amount of time before it can be grabbed. Meaning ninjas either have to be very sneaky and wait for the right time to swoop, or come in swinging and hope they’re good enough to take out any opponents that stand in the way. Since a team’s flag doesn’t need to be present at their base to score, balancing offense with is going to be key. Although it took me a second to figure out the flow of combat, overall my brief time with Naruto to Baruto Shinobi Striker's CTF mode was enjoyable. It was definitely one of the more enthusiastic hands-on I got that day as teams shared a few hoots and hollers over close matches. If the in-person revelry is any indicator of what players can expect from the online experience, then Naruto to Boruto Shinobi Striker may end up a popular team-based gaming experience.

There’s no official launch date for Naruto to Boruto Shinobi Striker, but fans should be getting their fix at some point in 2018 on Xbox One, PS4, and PC.