Bayek has started his next step in ensuring the Order does not regain power in Assassin’s Creed Origins' first piece of DLC, The Hidden Ones. One side quest that you might find yourself completing in the new area of Egypt, Sinai, is called Shards from a Star, and requires a bit of riddle solving.

Shards from a Star

The Shards from a Star quest in The Hidden Ones is a side quest with a recommended Level of 43. This side quest is picked up from one of the quest markers you’ll find as you uncover the map, and though it doesn’t tell you immediately, the reward isn’t just 8,000 XP.

Shards from a Star’s description reads:

The Scroll of Thoth is found by Gamilat, who is disappointed that it is not the legendary “shards of a star” he is seeking. He gives it to Bayek, who unlocks its mystery.

You will also receive a scroll in your inventory that reads:

Nut, the goddess of night, spat and a ball of flame crashed to the earth. Sky-metal, stronger than strong, fashioned into two bright daggers, by Ptah, god of the forges. Ptah asked Ra, “Where shall I hide them?”, “Light will show you the way,” said Ra. And Ra gave him a container for light, the Crystal of Thoth. He took the crystal to Thoth’s Temple and encased it within the roots of the Tree of Life born at his temple that none unworthy shall find it.

It’s quite the long riddle, but if you want your reward, you’ll need to solve the puzzle – or just read on to find out! 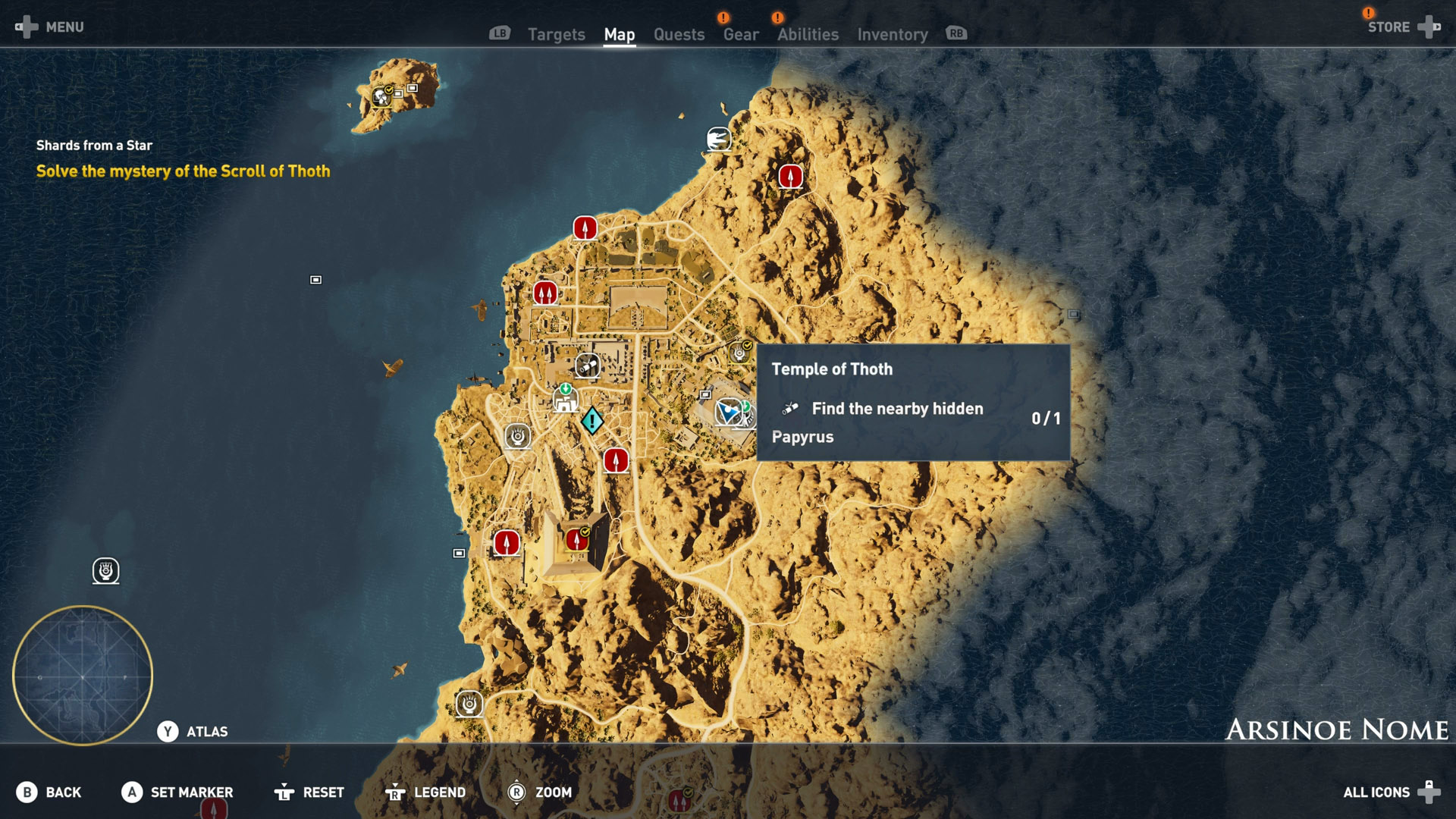 The first step is to get to the Temple of Thoth in Arisnoe Nome. This is a high-level area, so if you’re still struggling to kill enemies, take some time to level up. However, this quest involves no fighting, so if you can avoid being spotted, you’ll be fine. 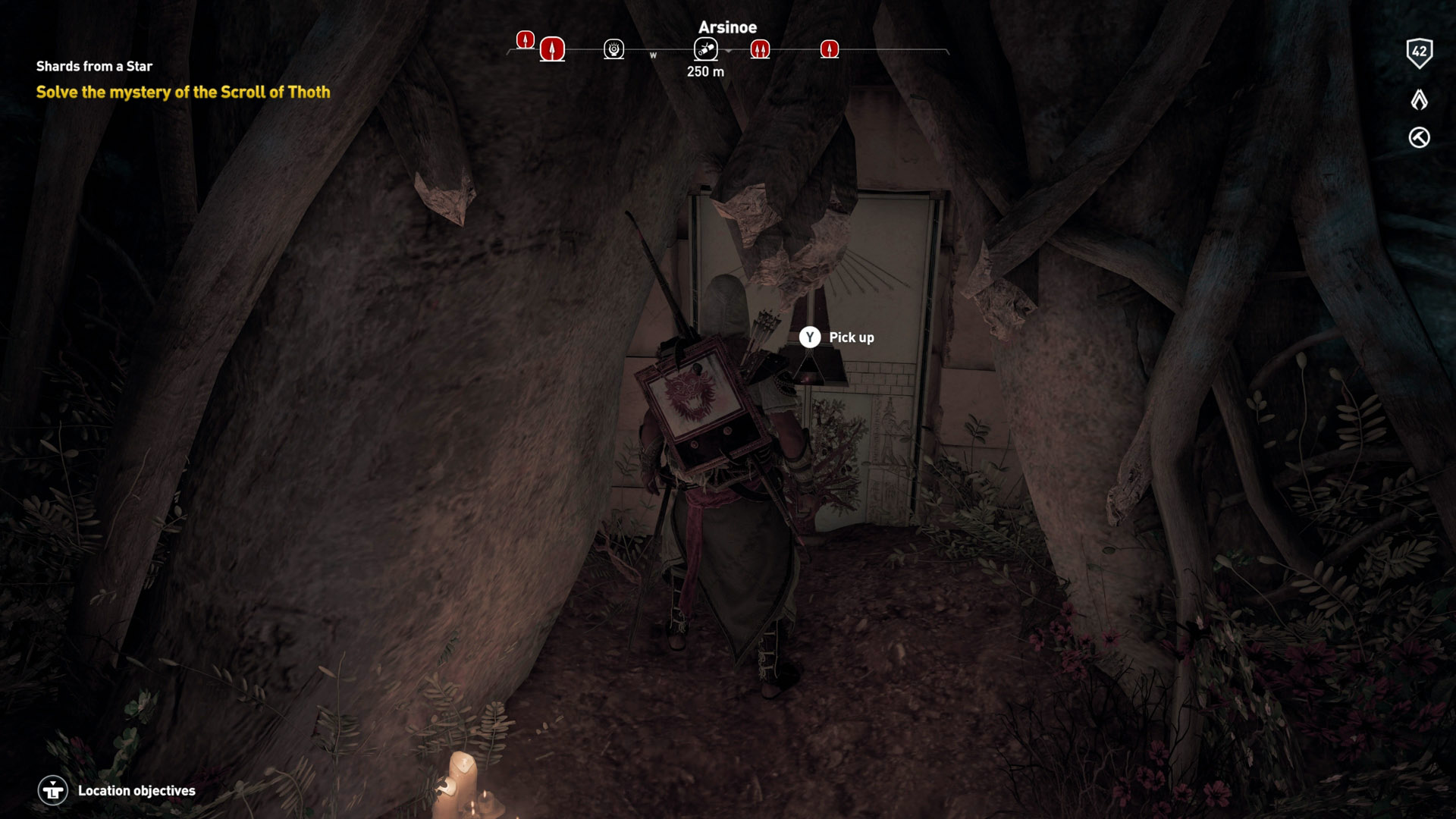 When you arrive at the Temple of Thoth, jump down to the tree in the courtyard and look for the branches covering a door. Use your weapon to hack the roots of the tree away, revealing a hieroglyphic. Interact with the mural to remove the Crystal of Thoth. 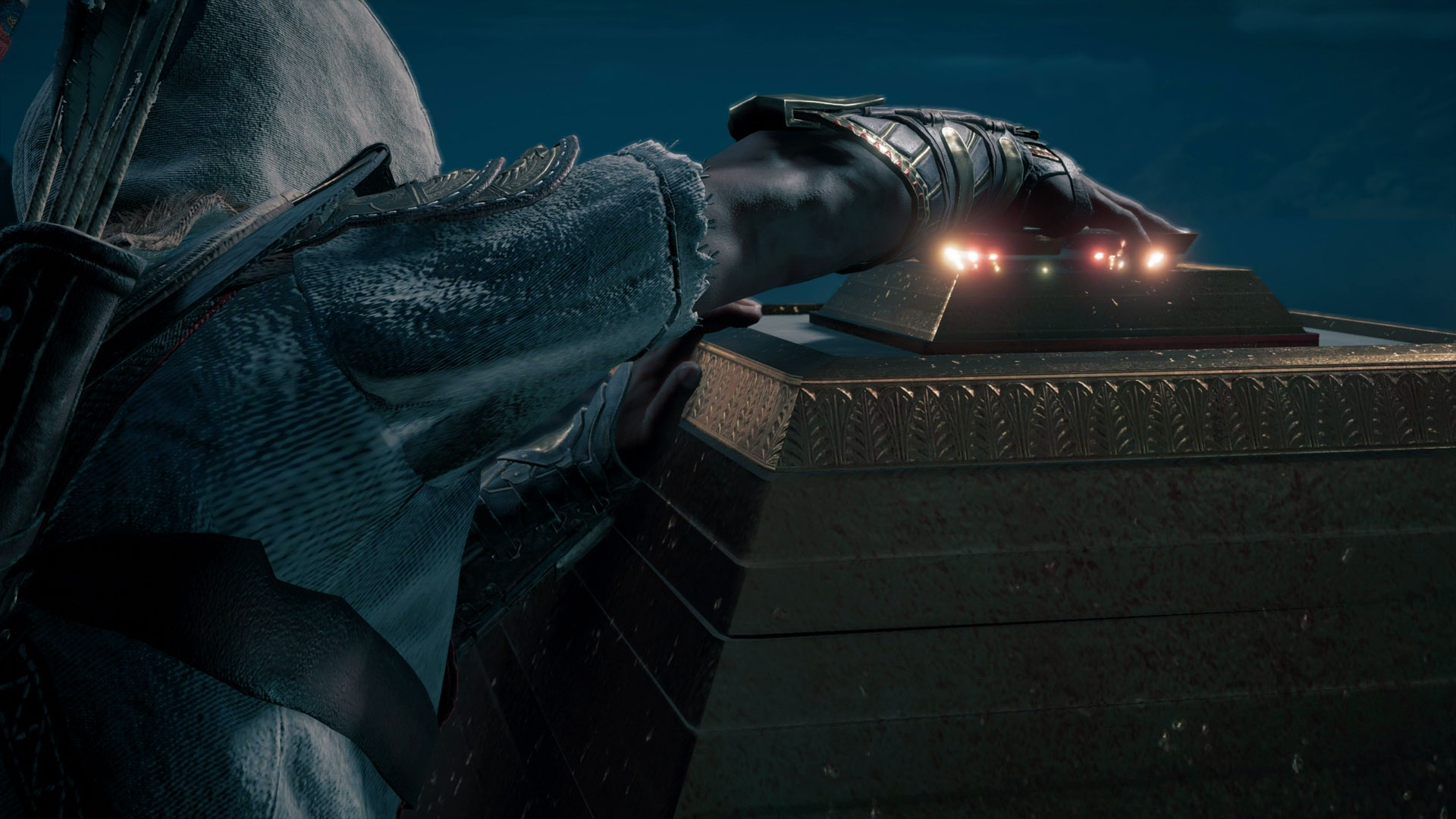 With the Crystal of Thoth in hand, climb to the top of the Temple of Thoth (or use the fast travel point). You will need to reach the very top of the obelisk and then interact with it to pop the crystal in place. 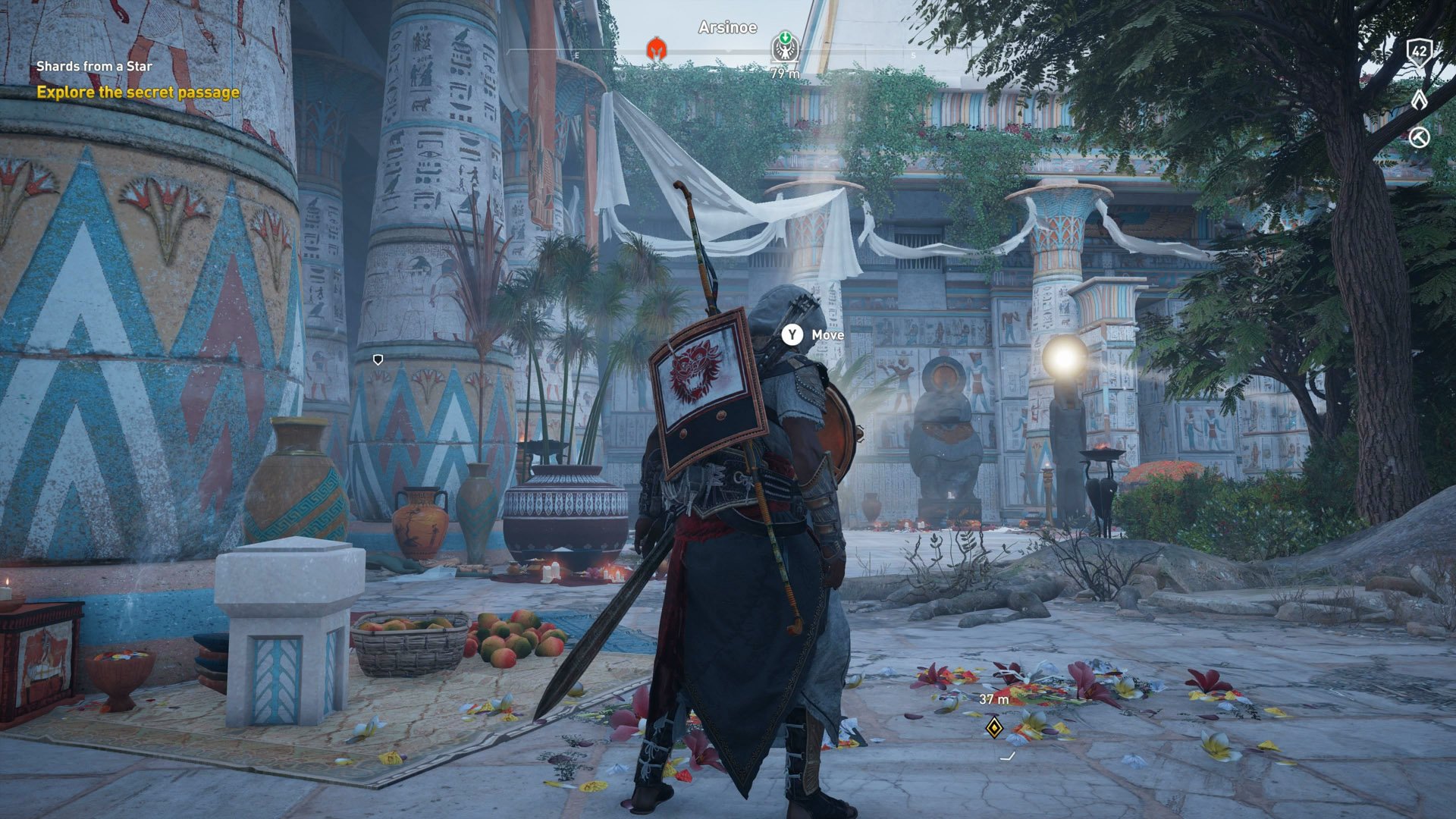 The next step requires you to solve the Light of the Crystal puzzle. To solve this section of the Shards from a Star side quest, wait until sunrise and then use the mirrors down in the temple to shine the sunlight onto the two large statues of Thoth (bird head). You may need to use fire to clear away any spider webs. When both beams of sunlight hit the door below the Tree of Life, it will open, revealing a secret passage. 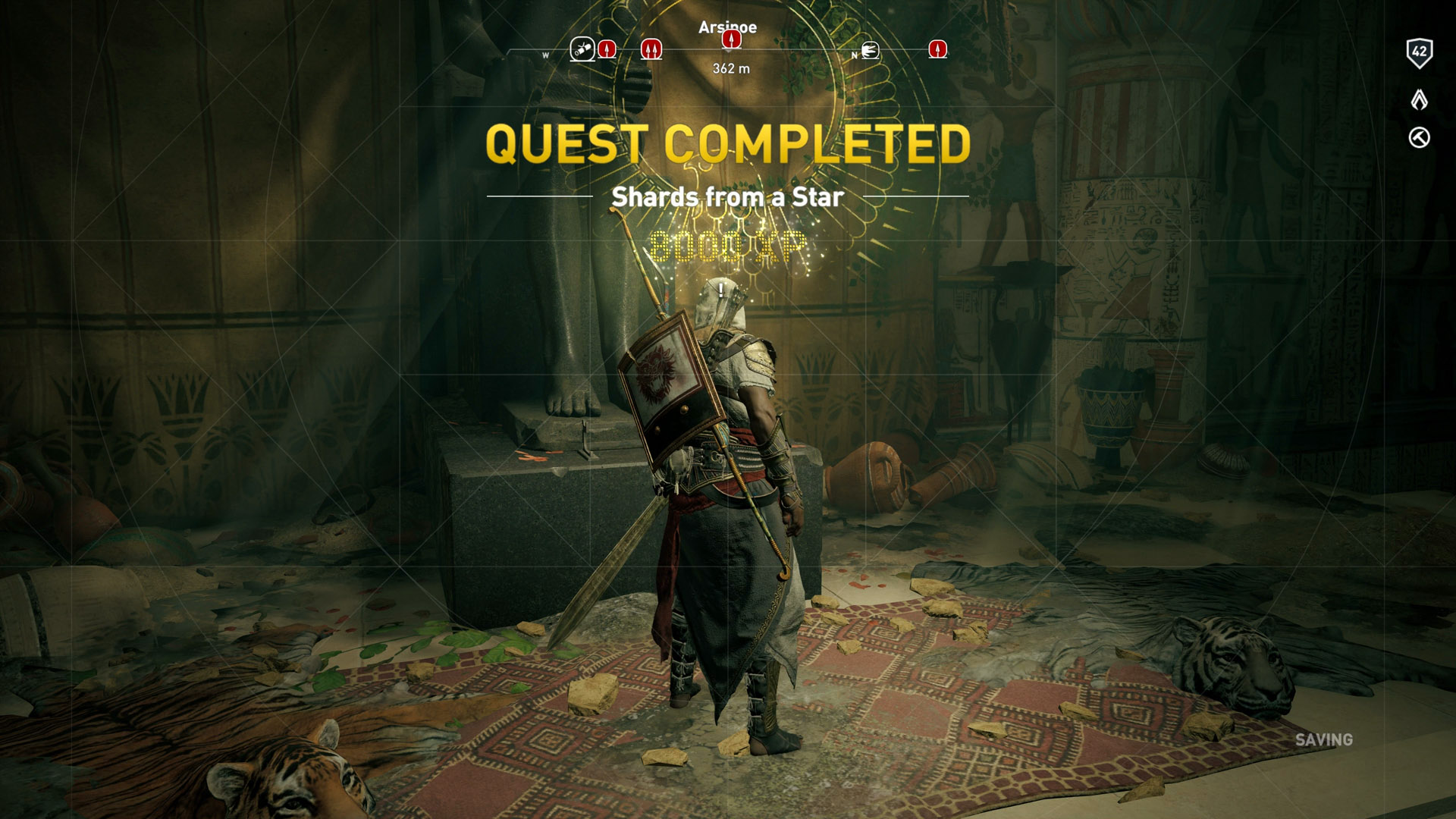 Head through the tunnel into the large room and collect your reward from the statue’s feet. This will complete the quest and reward you with the Blades of Thoth, Legendary Dual Swords that require Level 43 to wield. They have 4/4 Adrenaline Regeneration, 1/4 Combo Multiplier, and Health on Kill.

Be sure to check out our other guides on Assassin’s Creed Origins, like where to find all the Hermit locations, which has been updated to include the new resting spots in The Hidden Ones and all Stone Circles.