Assassin’s Creed Origins is full of places to explore and puzzles to solve, but some of the most rewarding activities are the ancient tombs found all over the map. These tombs offer gear, extensive backstory, as well as the most important commodity of all: silica.

As we mentioned in our guide on how to get silica, the rare resource is important if you want to eventually gain access to the tomb below the Great Sphinx and claim the Isu Armor set. Below is a list of all tombs in Assassin’s Creed Origins, which should help you collect more silica.

Before you finish unlocking all the tombs, make sure you have completed the Bayek’s Promise quest and have finished the 12 Stone Circles challenge. Completing these will ensure you can access the final tomb in the back of the Great Sphinx.

The following tombs should contain some amount of silica, which is good as you will need to amass 50 pieces if you want to unlock the Isu Armor. Each of the tombs is listed within a certain section of the map, so as you make your way to each area, be sure to consult the appropriate heading below. Only a few of the tombs contain an Ancient Mechanism, and there are usually enough silica in the room to activate it without reducing your own supply. 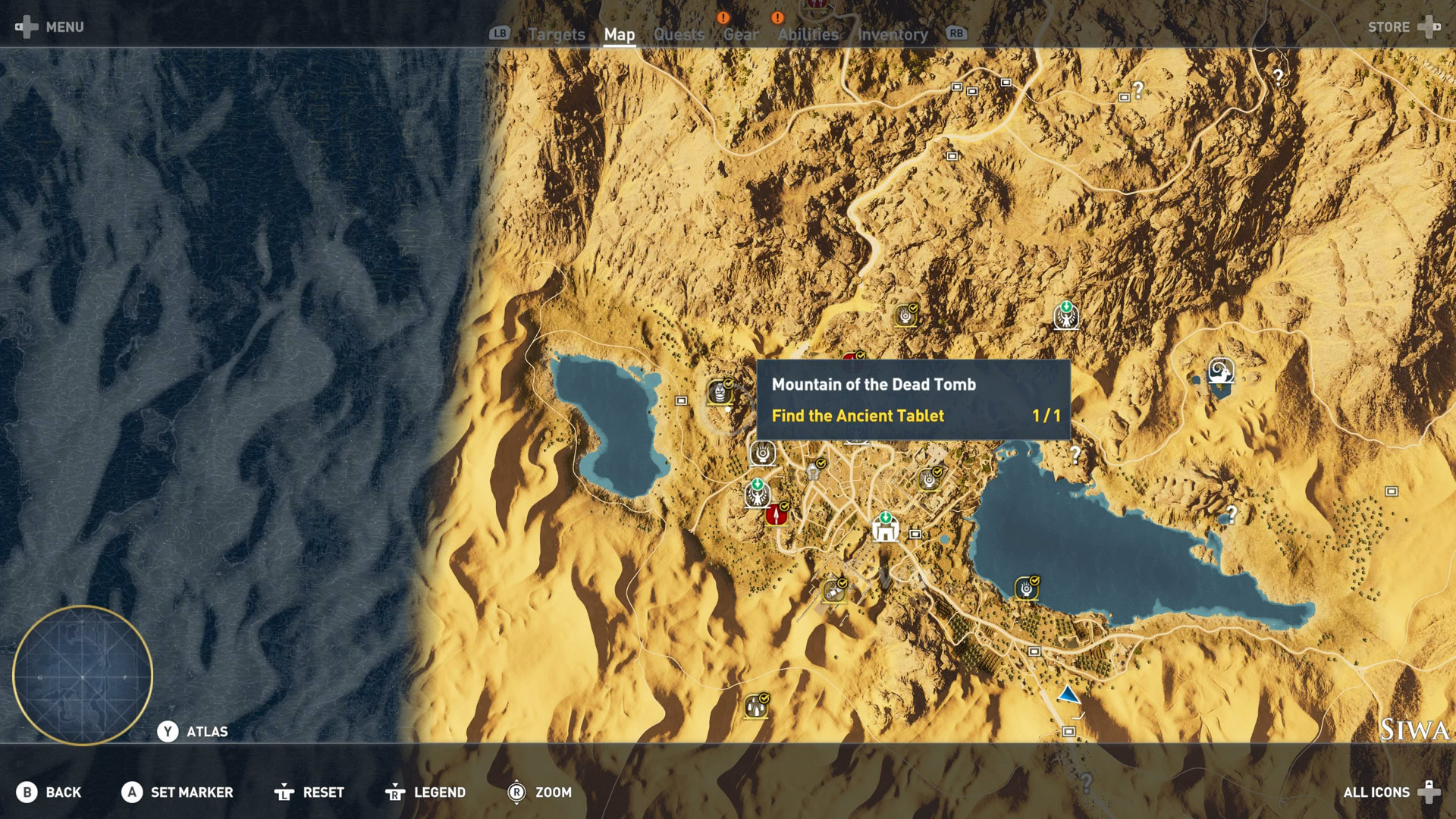 The Mountain of the Dead Tomb is located in Siwa, and is one of the first tombs you’ll explore. 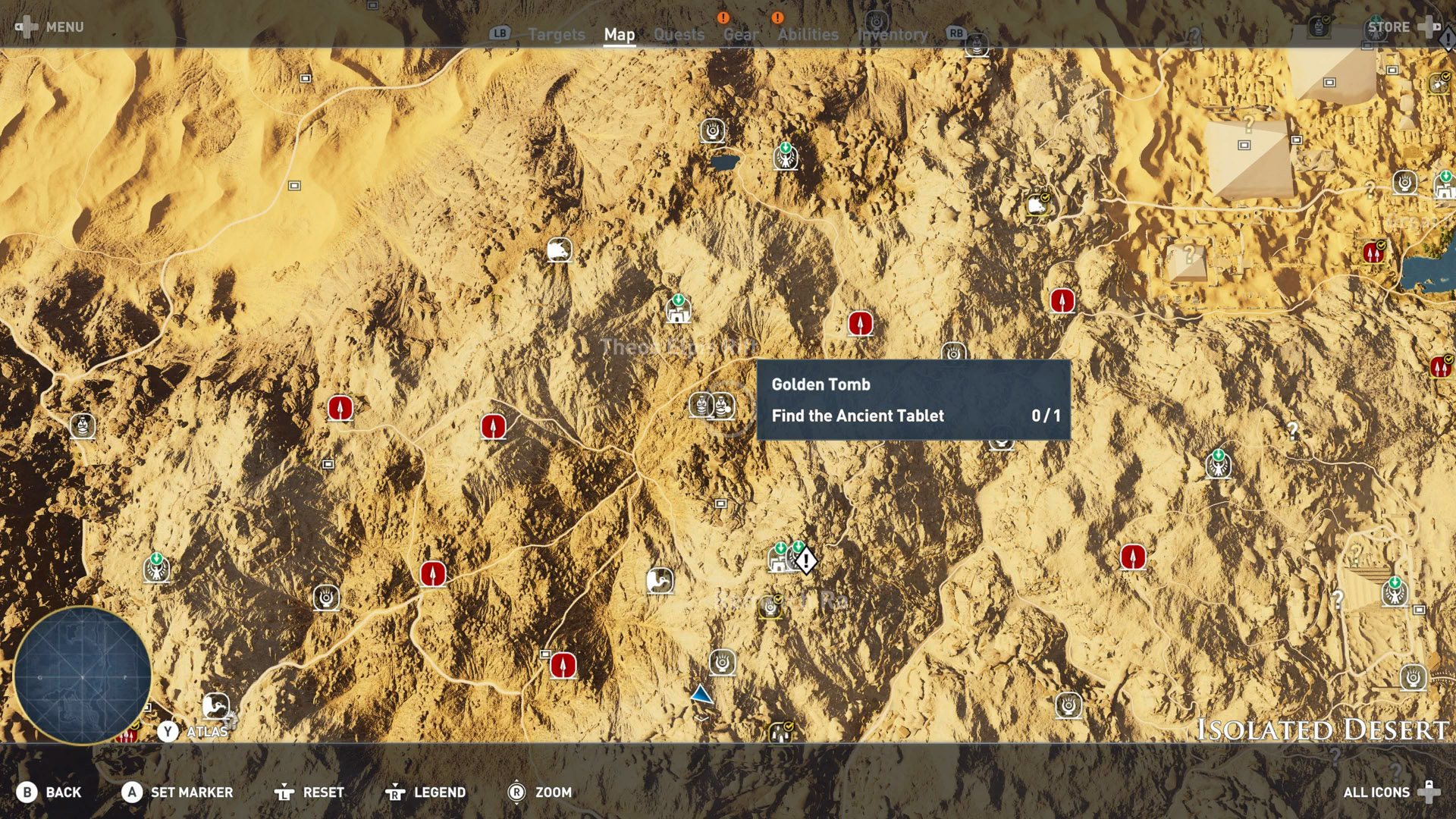 The Golden Tomb in the Isolated Desert requires you to clear spider webs off of mirrors so you can shine sunlight through the dark halls. At the end of the Golden Tomb is an Ancient Tablet, but it also connects to the next tomb in the area, Oun-mAa Niye Ressoot. 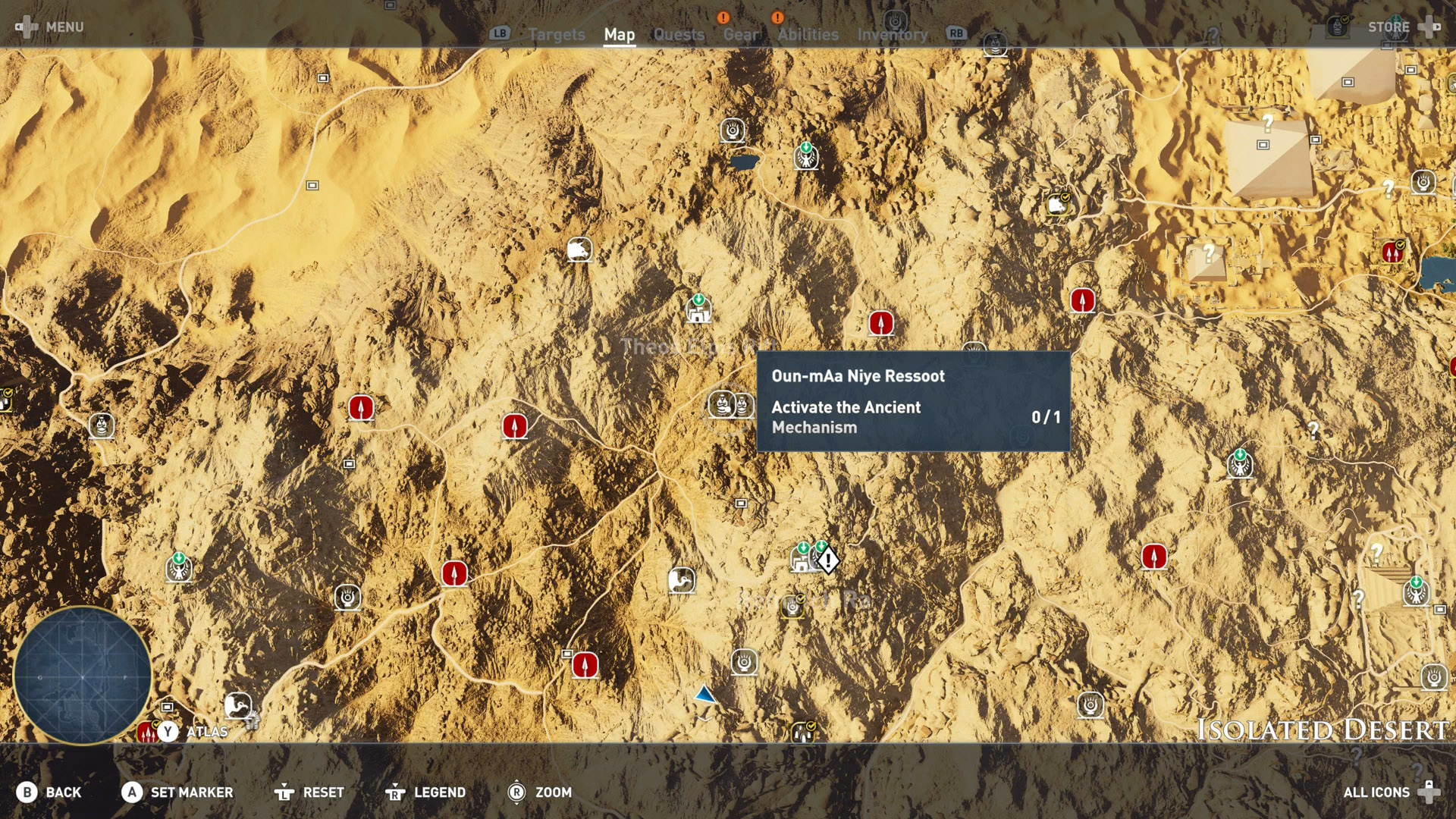 Oun-mAa Niye Ressoot is another tomb that is connected to the Golden Tomb. At the end of the Golden Tomb, you can find a movable object that will let you easily access this tomb from outside. There is roughly seven silica that can be found in the main chamber where you’ll find the Ancient Mechanism. 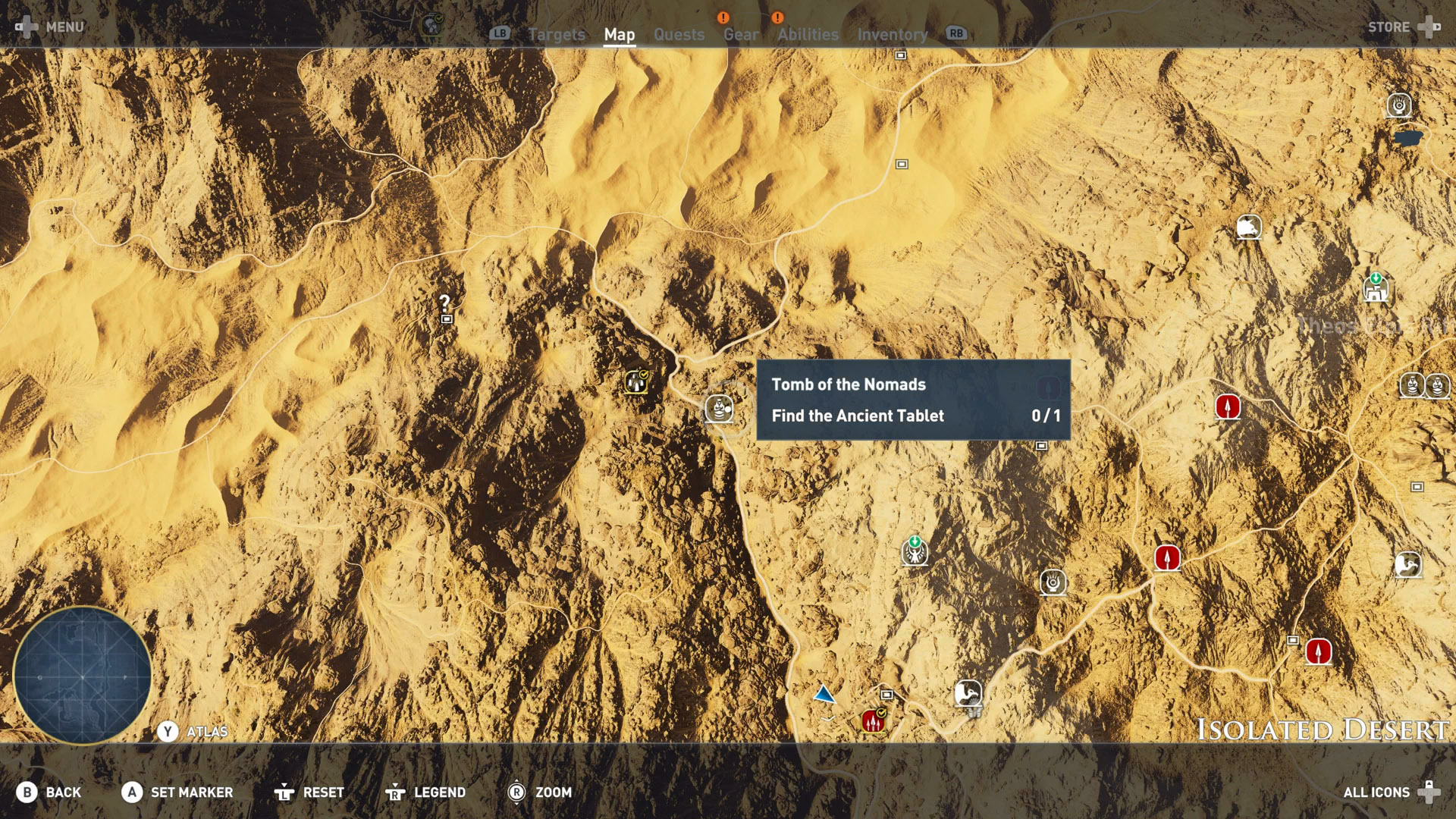 Tomb of the Nomads is a very small, yet water-heavy, tomb, so be prepared to spend some time swimming around. There’s a single Ancient Tablet to find, and a bunch of silica littered around underwater.

There are two tombs in Saqqara Nome, both are located to the east of the region, near the pyramids. Each tomb has its own fast travel point nearby. 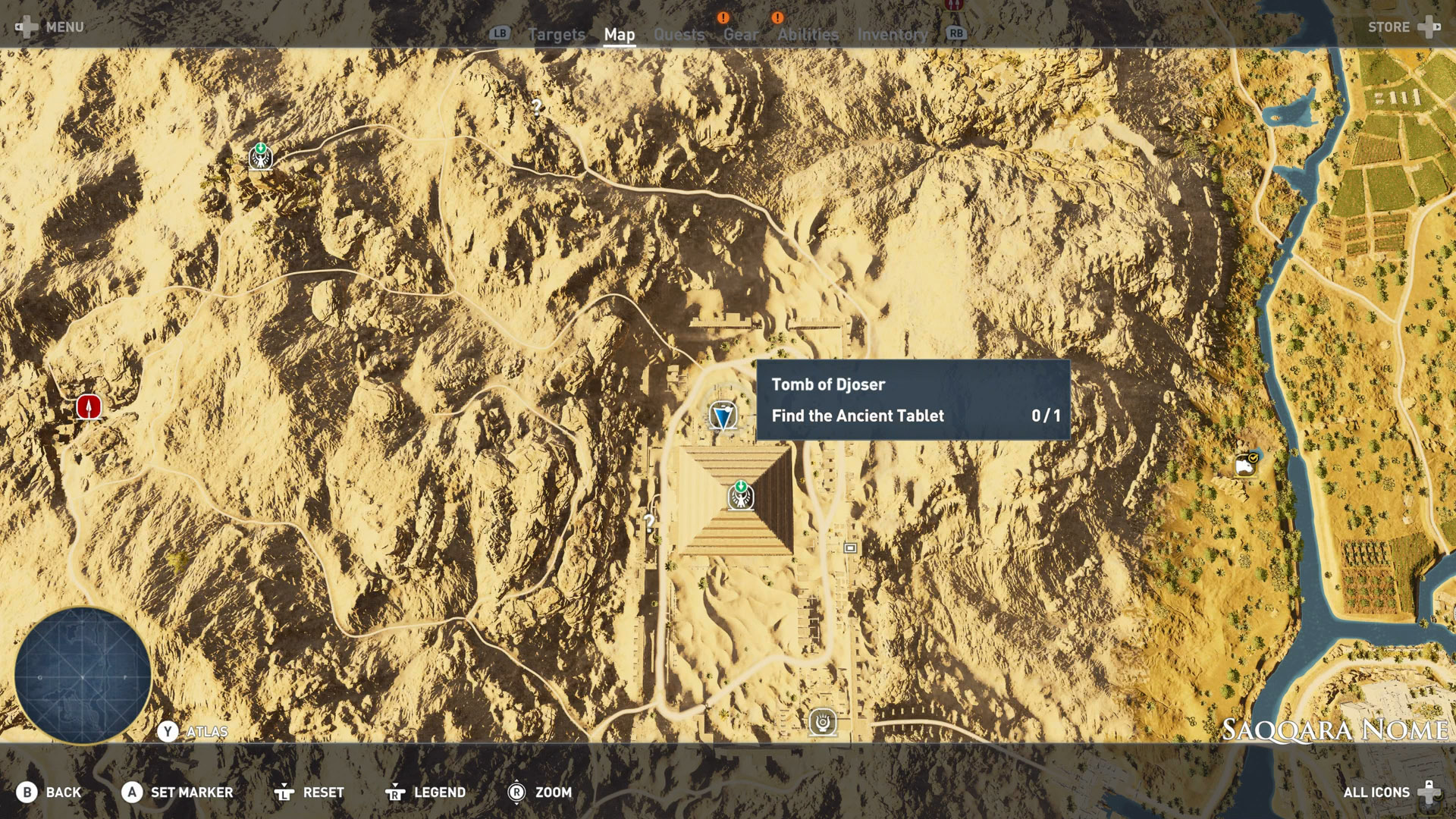 The Tomb of Djoser is located beneath the north pyramid. This tomb is full of breakable walls that lead you to a library. Keep your eye out for more weak walls to bust through to find the Ancient Tablet. 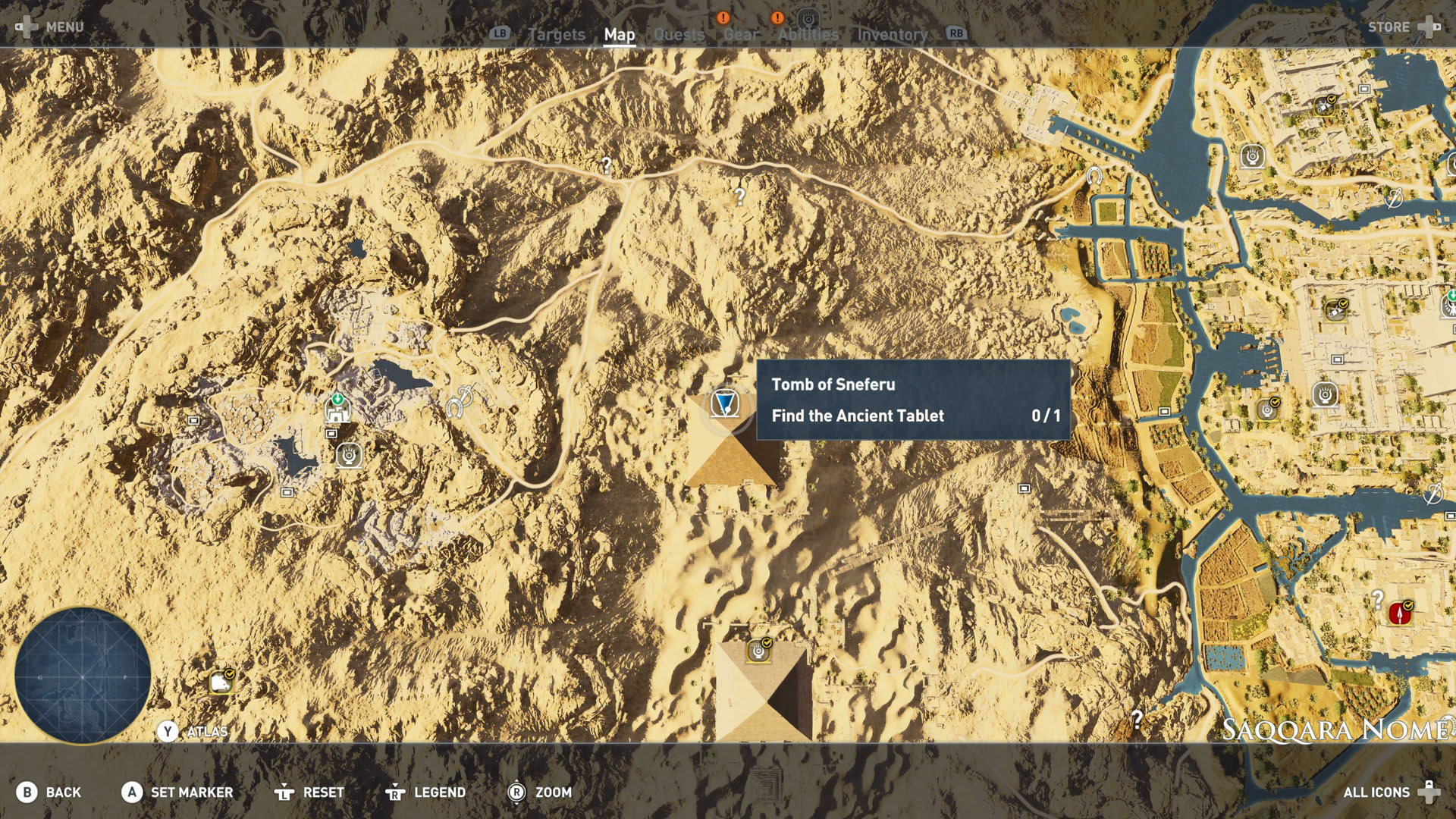 The Tomb of Sneferu introduces some weighted physics problems for you to solve using items you can carry around. As soon as you enter the tomb, the straight path will take you to silica, but the main path is through a hidden swinging door in the main hallway.

The two tombs in Black Desert can be found by using the fast travel point on the left side of Faiyum and then heading west. 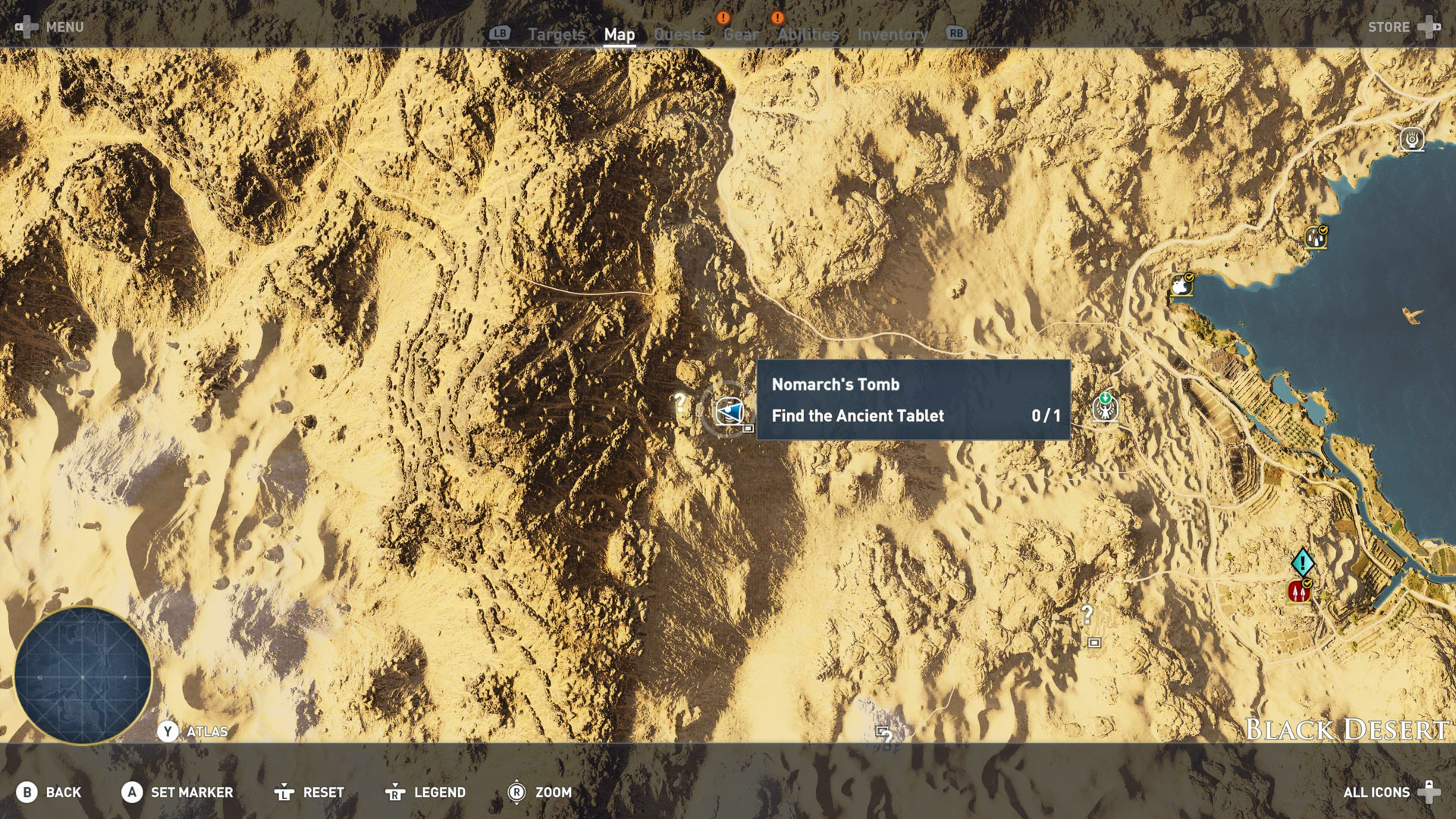 Nomarch’s Tomb can be accessed through a hole in the ground, letting you drop down into the tomb. You will need to shift the movable object under the raised end of the boat in order to access the upper level. It’s a fairly simple section, and completing it grants you access to the next tomb along, Seshem.eff Er Aat. 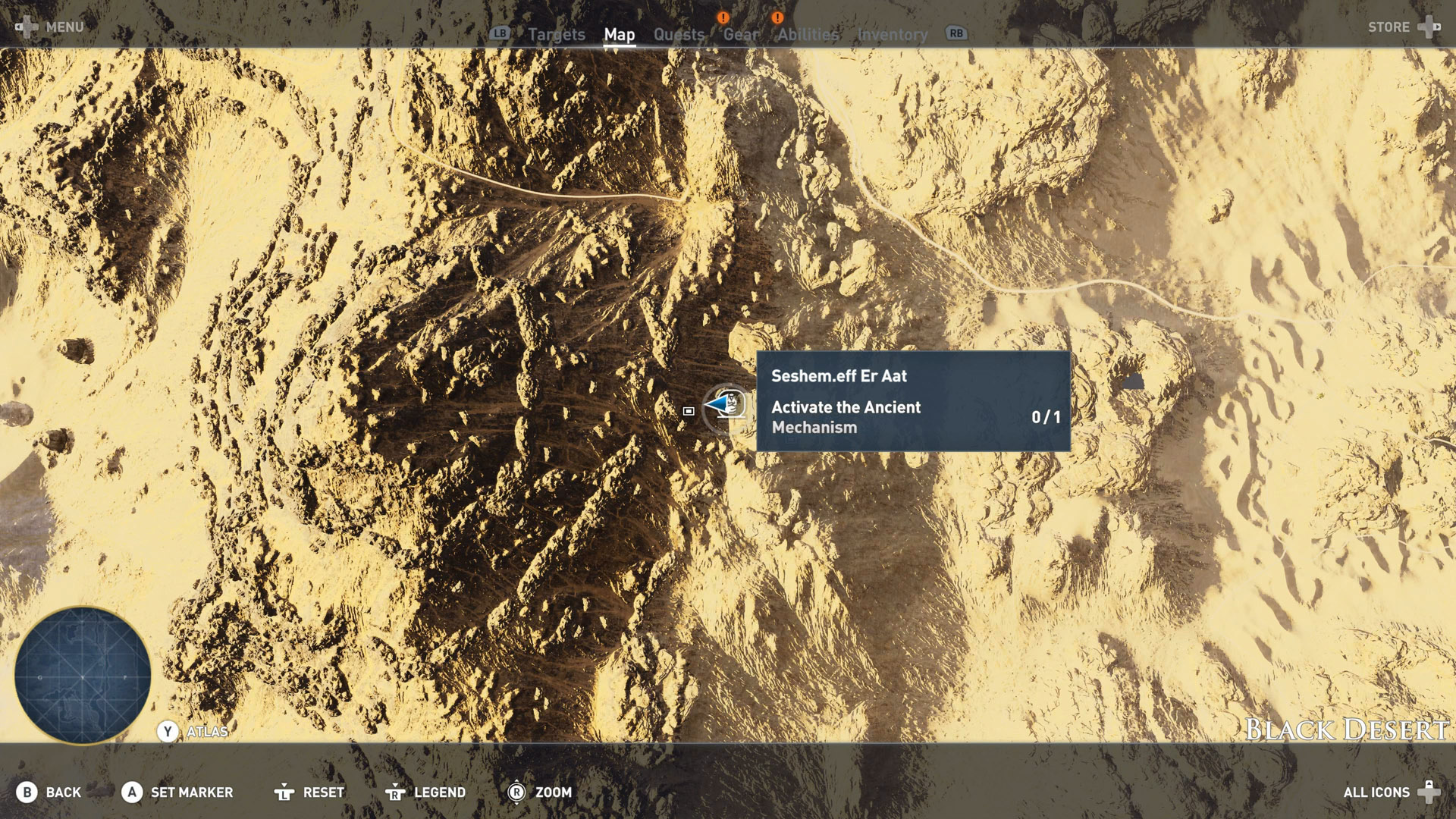 The Seshem.eff.Er Aat tomb contains an Ancient Mechanism and can only be accessed by completing the Nomarch’s Tomb. The Ancient Mechanism in this tomb is located below water, as are a half dozen silica. While you don’t need the upgraded breath-holding skill, it can make it easier to quickly collect the silica. 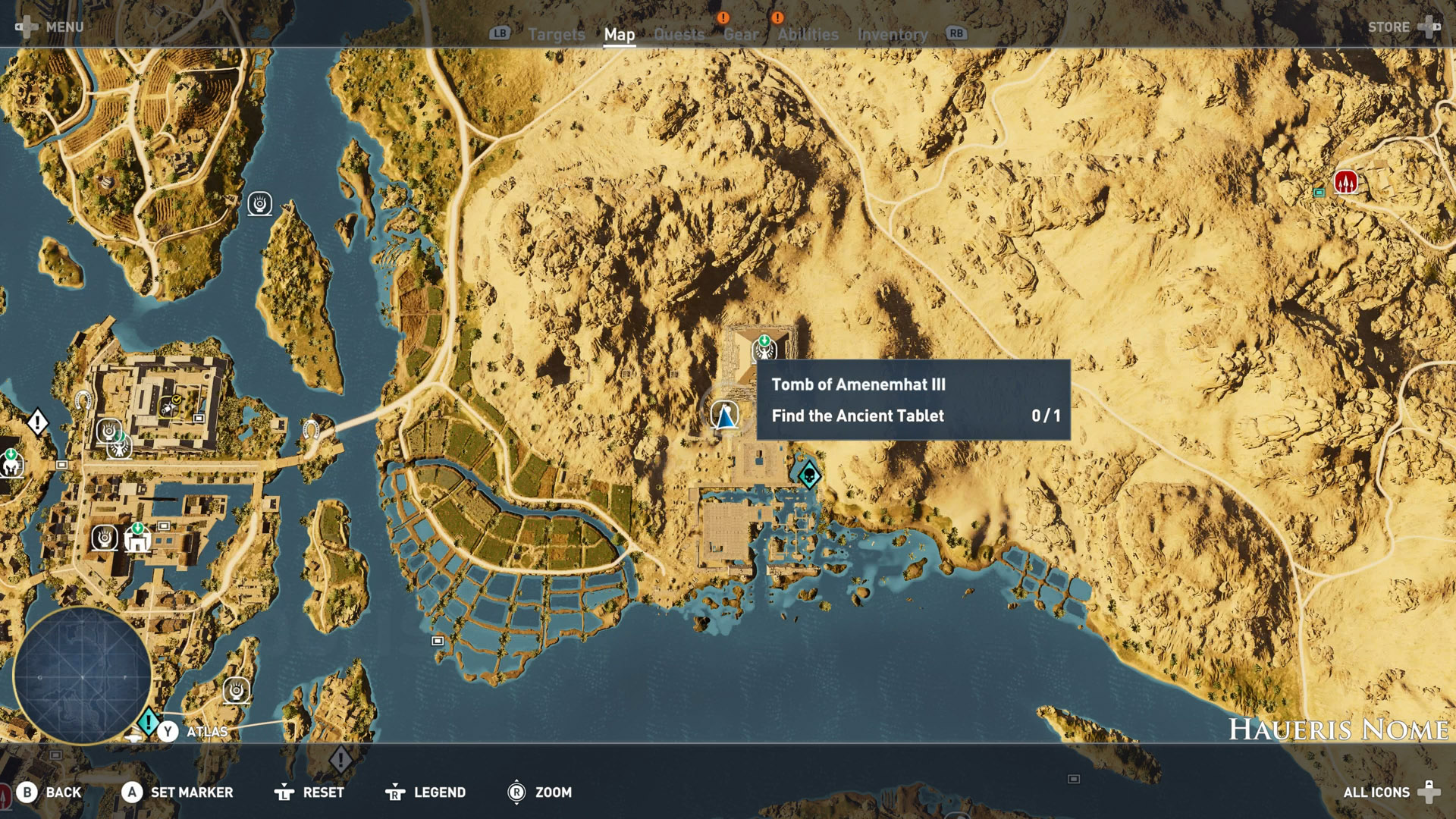 The first tomb you can find in Haueris Nome is called Tomb of Amenemhat III, found in the west of the area, close to Krokodilopolis. Look for the pyramid near the mountain. In this tomb, you’ll come across a door sealed by some contraption, to open it you will need to break the wooden floor and attack the wall to release sand. You will need to kill the crocodiles in order to swim below the water and find the Ancient Tablet. 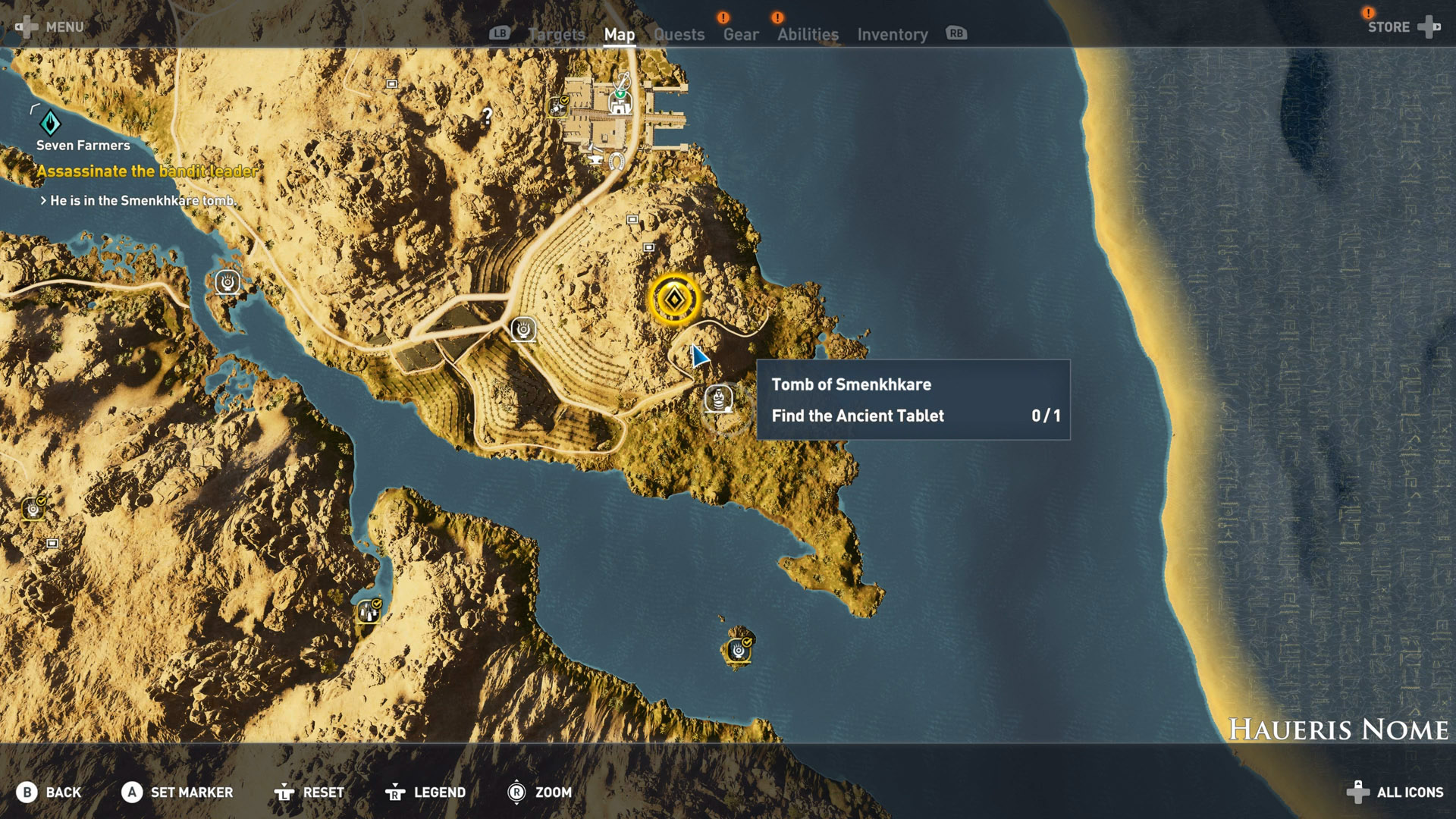 The Tomb of Smenkhkare is located on the southern peninsula of Haueris Nome. You may come across this as you complete side quests. This tomb contains a lot of moving platforms that you will need maneuverer across to reach higher levels. At the end of this tomb you will find an Ancient Tablet and the passage to the next tomb, Eeyoo Sekedoo Aat. 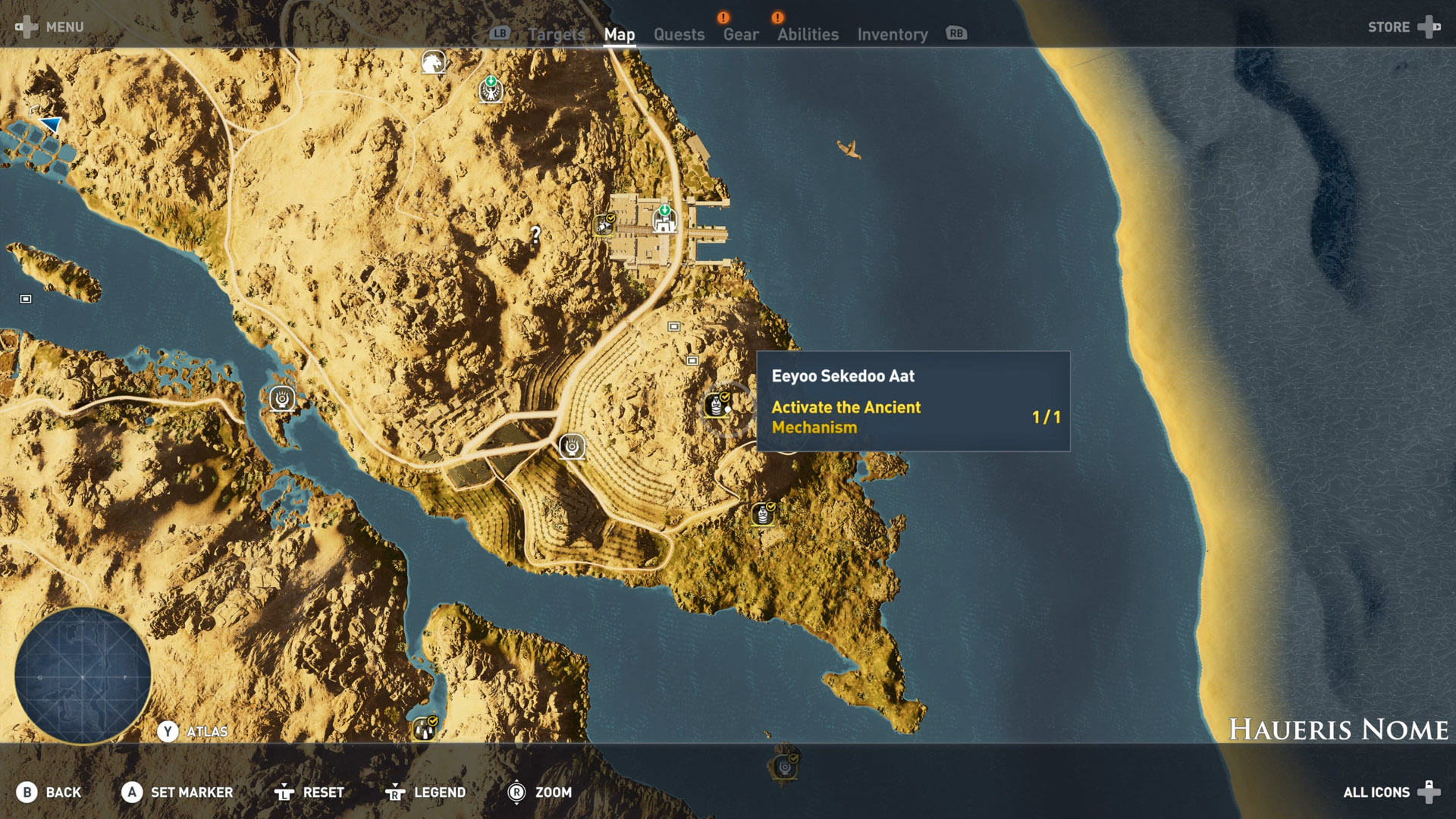 Eeyoo Sekedoo Aat is only accessible after reaching the end of the Smenkhkare tomb. There are a few silica to be found in this area, and you’ll need at least five to activate the Ancient Mechanism at the end. 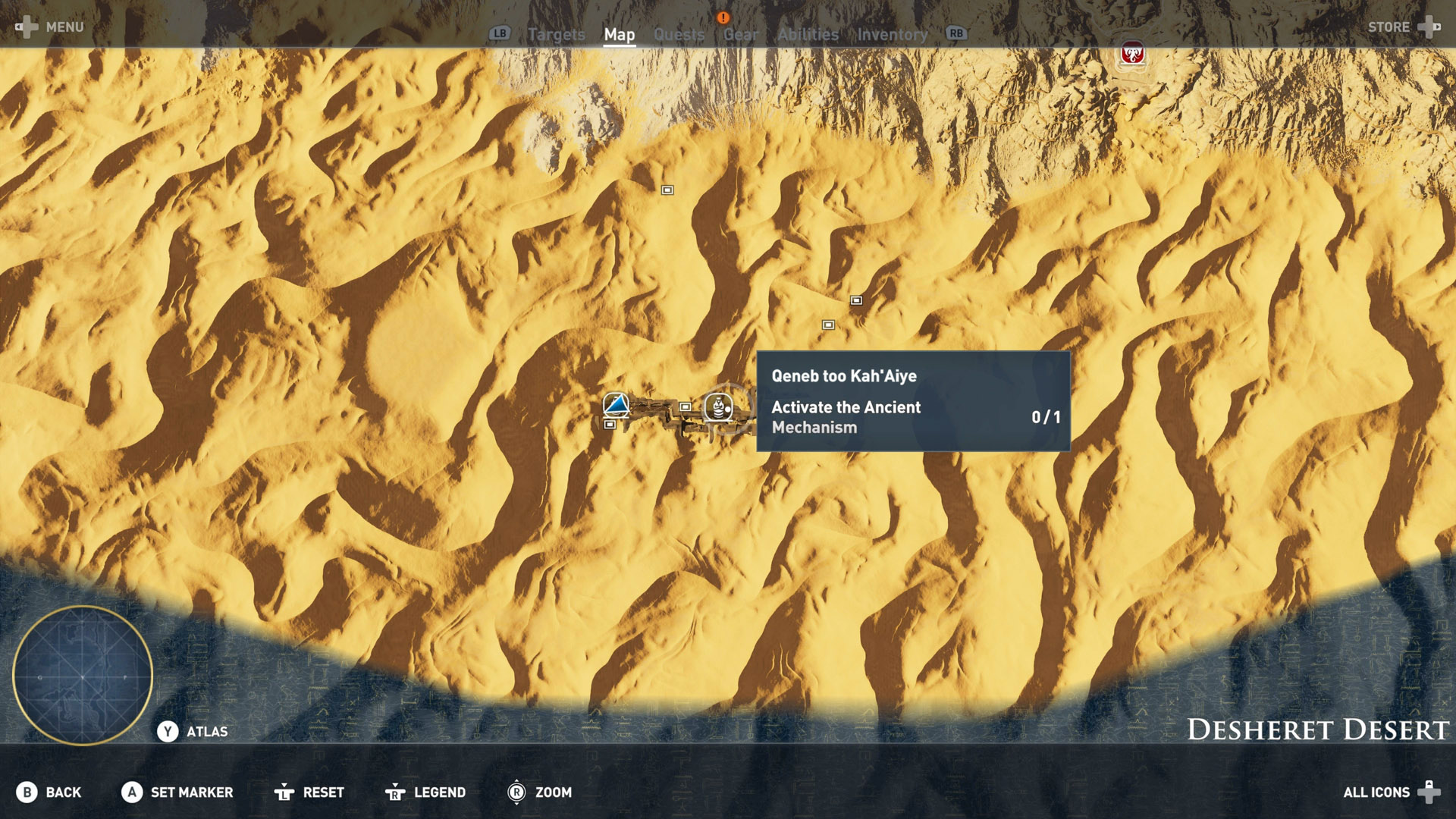 There are two tombs to be found in the Desheret Desert, and both are located right by one another. Head to the center of the desert to find a black-stone temple buried beneath the sand. To gain access to the Seth-Anat Tomb, you must move mirrors to bounce the sunlight through the canyon. Use fire to clear the cobwebs off of the dirty mirrors. At the end you’ll find the Ancient Tablet and access to the next tomb.

Qeneb too Kah’Aiye can only be accessed at the end of the Seth-Anat tomb. In here you will find plenty of silica and an Ancient Mechanism. 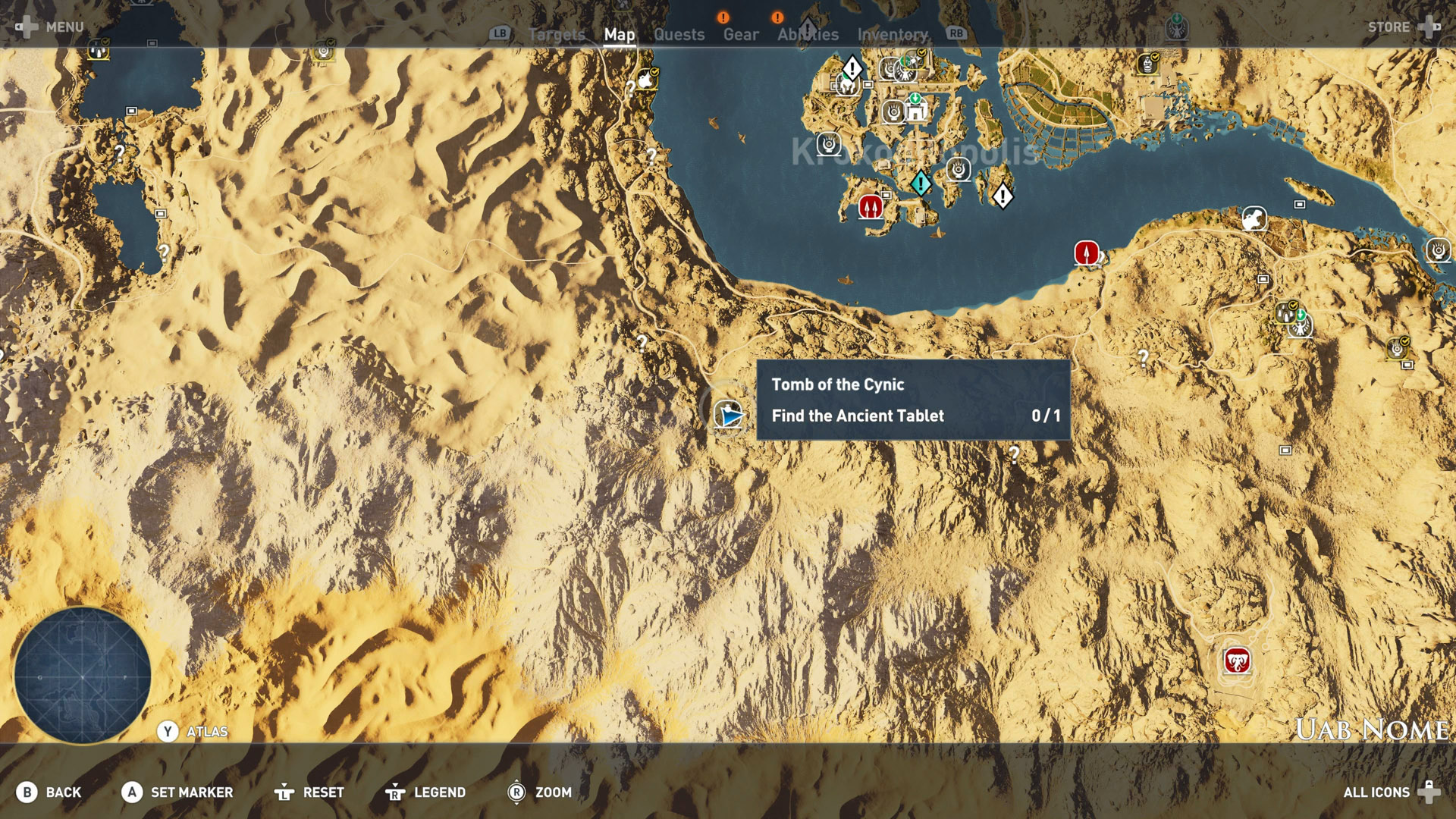 Tomb of the Cynic is located to the west of Uab Nome, near the border to the White Desert Oasis. You can reach it by starting at Krokodilopolis and heading south into Uab Nome. This tomb is full of lions, making it one of the only tombs with a focus on combat instead of puzzles.

The final five tombs are locations in Giza, with three located beneath the main pyramids, one in the west near the mountains, and the last one below the Great Sphinx. 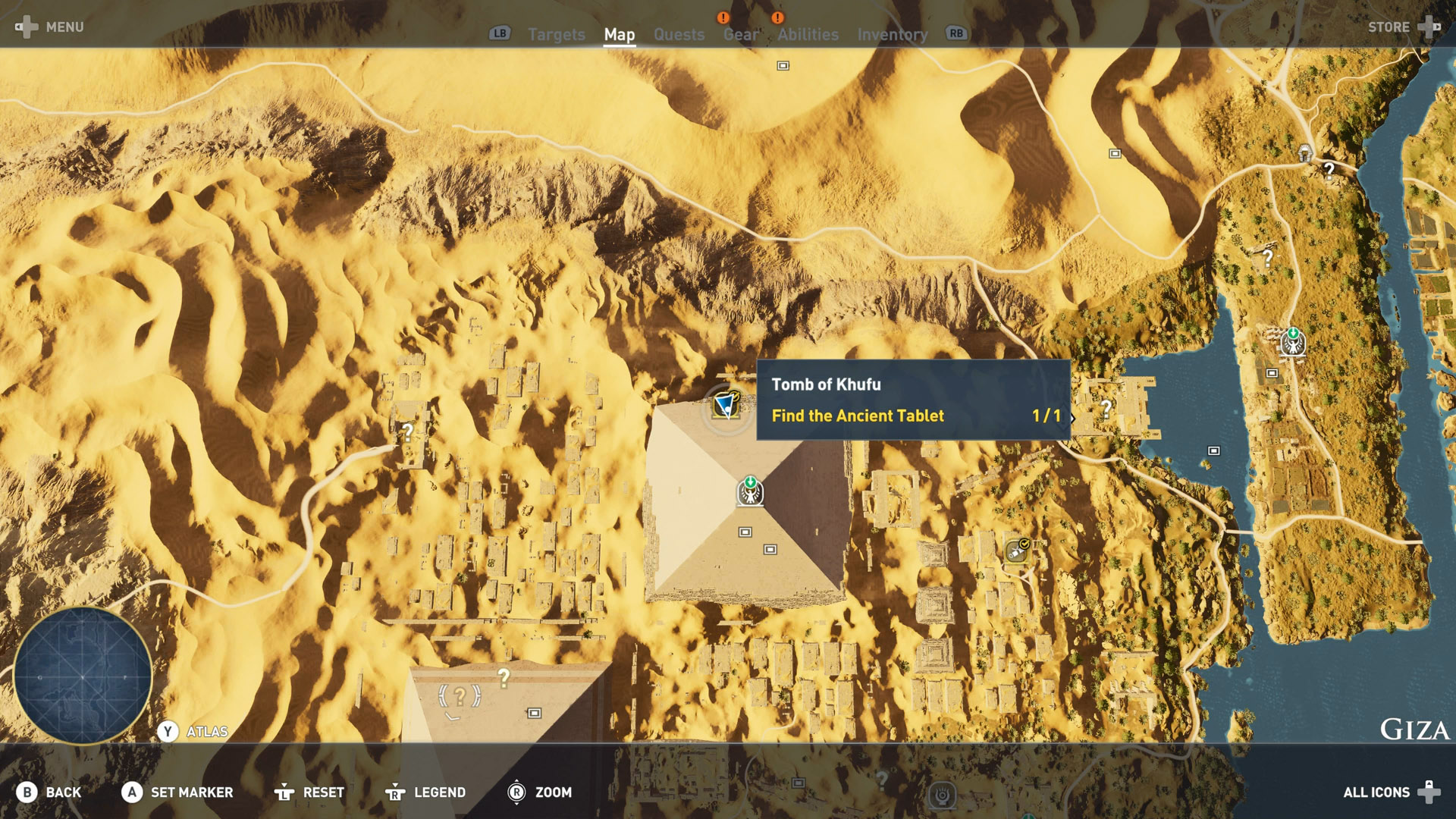 The Tomb of Khufu can be found near the great pyramid, on the northern side. There are a lot of hidden entrances and passages inside, so make sure to use the pulse ability to find all the secret areas. This tomb contains both an Ancient Tablet and an Ancient Mechanism. As soon as you enter the tomb, you can either continue left along the path or squeeze through a crack – the crack takes you to the Ancient Mechanism and the left takes you to the tablet. 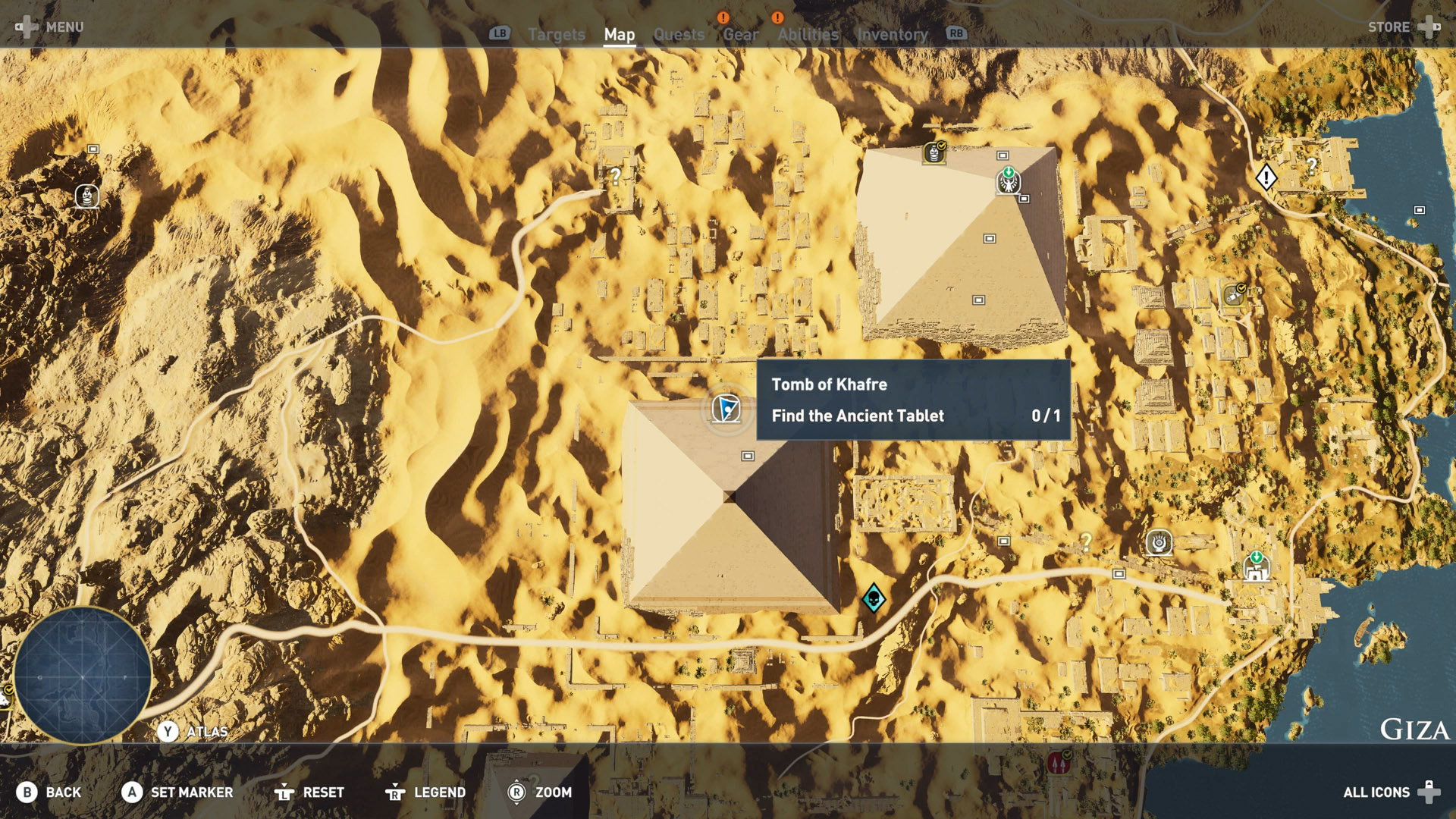 The Tomb of Khafre is the next tomb found in the middle pyramid. It’s a short tomb, with a simple seesaw boat puzzle and an Ancient Tablet at the end. 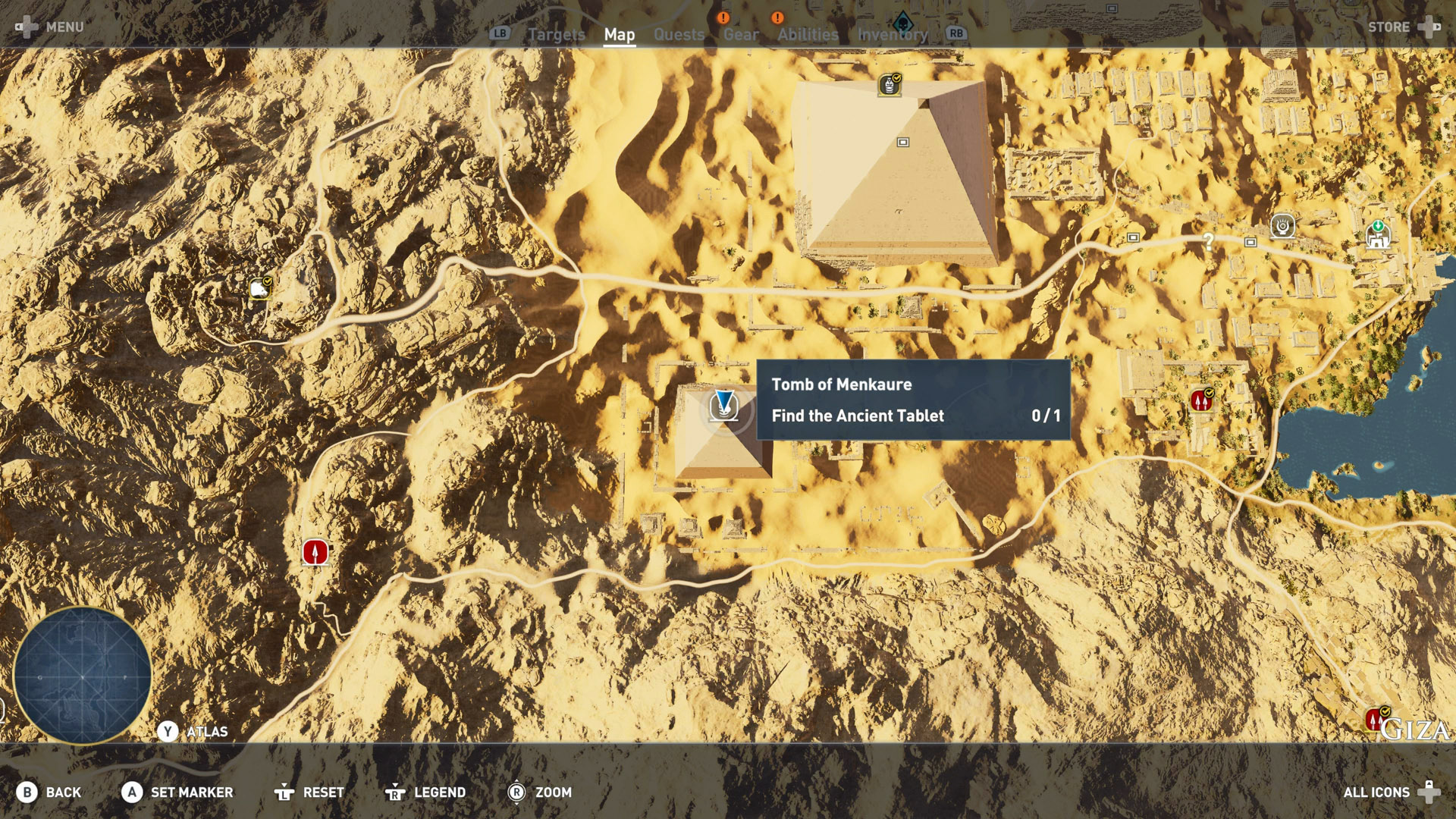 Tomb of Menkaure is located in the last, and smallest pyramid and can be accessed from the north side. This tomb can be a bit tricky, as progressing requires finding a hole above a door to climb through. This hole can be found above the door you use to enter the tomb. At the end of the Tomb of Menkaure is an Ancient Tablet. 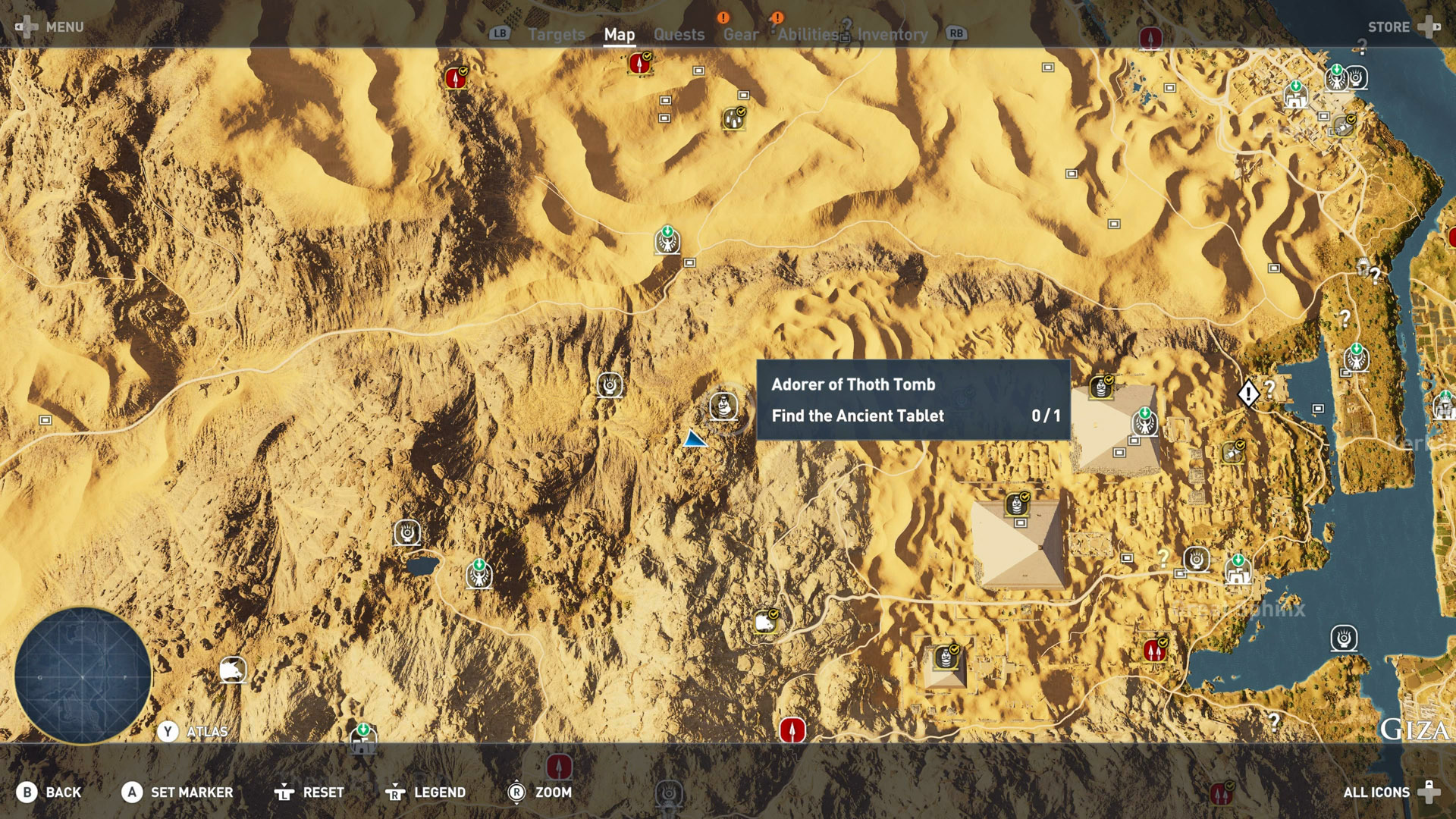 The next tomb is called the Adorer of Thoth Tomb and can be found to the west of the great pyramid and to the south of the fast travel point in Iment Nome. There are a lot of guards inside the cave, and a weighted puzzle to solve that leads you to a room full of treasure an the Ancient Tablet. 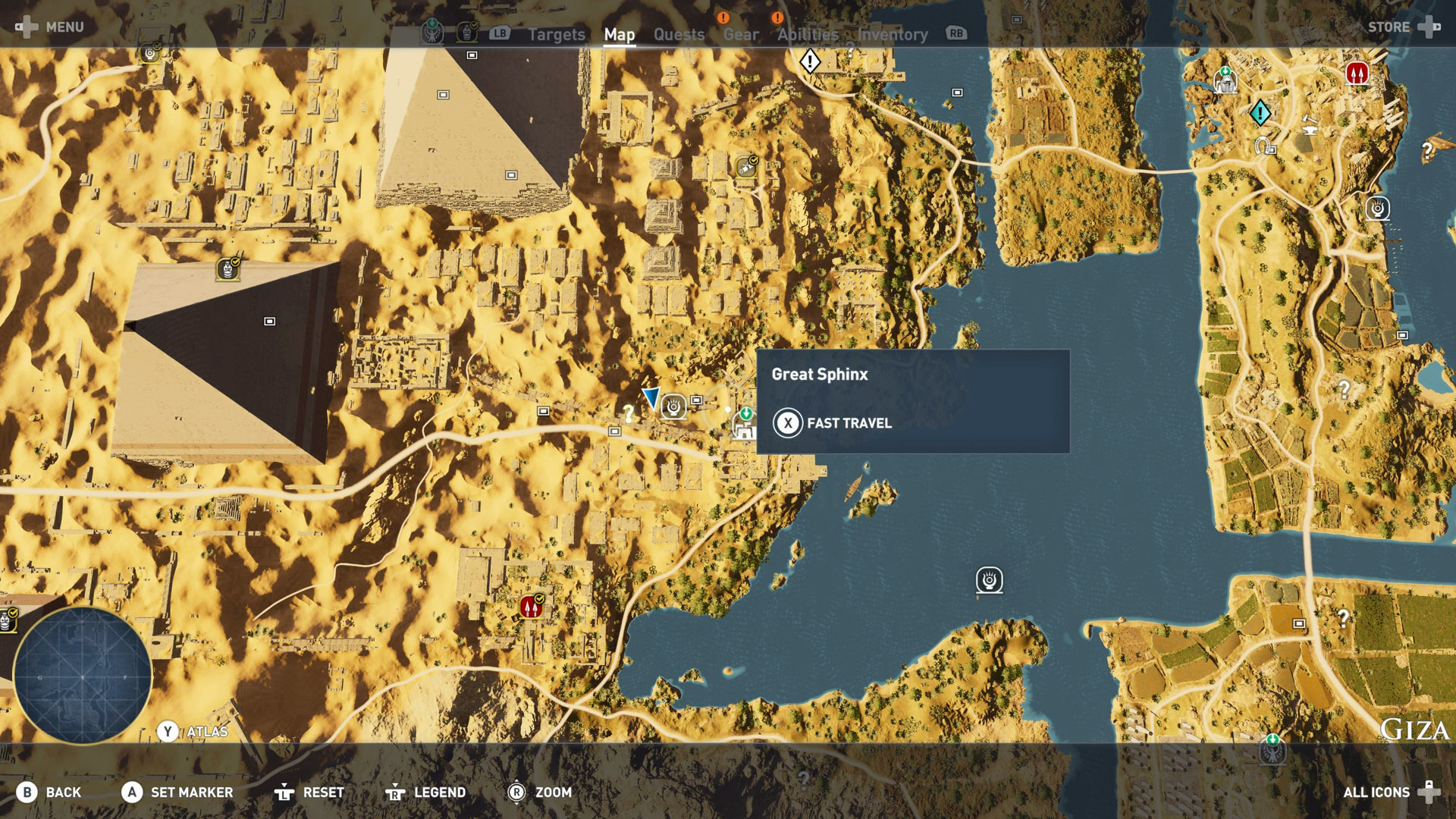 With all the tombs completed, head to the Great Sphinx in Giza and around to its back to find a little tunnel in its leg. Move through until you find an open room with an open coffin, on the back wall is a secret tunnel covered in cobwebs.

Continue through the extremely dark rooms until you reach a large cavern with a domed ceiling covered in blue lights. In order to progress further, you must have completed the side quest, Bayek’s Promise, and found all the Stone Circles. Interact with the map of Egypt in the center and then pass through the new passage, this will take you to the final tomb, Eesfet Oon-m’Aa Poo. Here you can find a few extra silica.

Climb the structure and then spend 50 silica to interact with the final Ancient Mechanism. Now that you’ve completed all the tombs in Assassin’s Creed Origins and activated the final Ancient Mechanism, you will be reward with the powerful Isu Armor! Be sure to check out our other guides, such as all Hermit locations and where to find all Phylakes.