Oculus announced the latest iteration of their untethered Santa Cruz VR HMD prototype during the Oculus Connect 4 Keynote. The company also introduced brand new Santa Cruz controllers at the event. I was unable to try out last year’s version, but yesterday I experienced the most freeing VR demo of my life. Santa Cruz is setting the goalposts for a truly immersive VR experience.

The demonstration featured two software experiences. The first was Boundless, a demo where players can interact with an adorable pet that looked like a dinosaur crossed with a puppy. This demo was really designed to show off the Santa Cruz VR HMD’s freedom of motion. With the lack of a cable tethering you to a PC, you are able to walk around a large area unimpeded and immersed. The demo was fairly simple. You could grab fruit off of a nearby tree and feed it to your pet and eventually you could play fetch with the good boy.

Hand presence was definitely a focus of the Boundless demo, and I probably spent too much time petting my new VR buddy and throwing the stick. He was just such a good boy, Brent. Eventually a hand appeared in one corner of the area I was hanging around in and once I placed my hand in there, the demo was completed. My main takeaway from the Boundless demo was that it was very fun to move around in VR without having to worry about tripping over a cable. That simple and key difference takes the feelings of immersion and presence to a whole new level.

I was ushered into another demo station adjacent to the room I first experienced Santa Cruz in for another software demonstration. The experience was called Timestall and it involved you defending your cryogenically frozen buddy from a horde of robots. The demo places you on a platform in what appears to be a massive spaceship. You are given a moment to get acquainted with the surroundings, but you and your frozen pal are suddenly attacked. Time freezes. You now have a short amount of time to alter the direction of various projectiles, enemies and debris that are hurtling towards your friend and his life support machine. You can throw the enemy robot in the way of bullets and redirect debris to avoid your friend’s cryogenic chamber. During my first attempt, I didn’t realize that there was a life support machine, and I failed to save my buddy. On my second try, I did it for Shacknews and made those alien robots pay for shooting up my friend.

Besides hand presence being the focus of this demo it was interesting to be able to walk around the platform freely. It was amusing to even walk on the absence of the platform, which was probably not an intentional bug. The other thing that really stuck out for me about this demo was the amazing sound. It definitely enhanced my feeling of presence while allowing me to communicate with my Oculus representative, because I had no headphones on. That’s right. The audio is generated from the Santa Cruz VR HMD itself. This was one of those OMG moments, and just one of the many marvelous hardware advancements that this breakthrough HMD demonstrates.

As I took off the HMD after the Boundless demo, I was blown away by one amazing design detail. There was nothing but a head strap on the back of the unit. 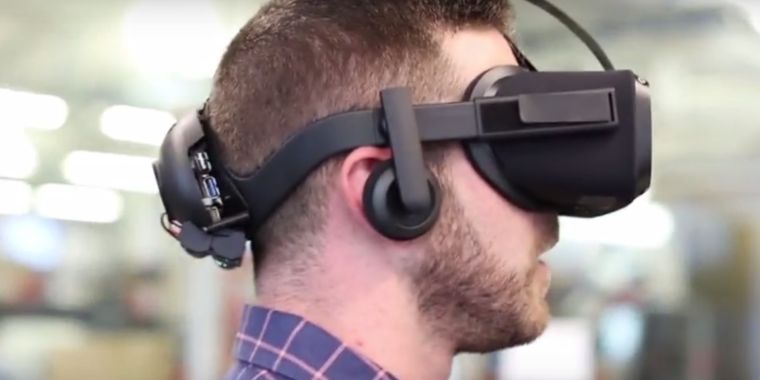 They have somehow fit all of the technology required to power a high fidelity VR experience in the front part of the headset while maintaining superb counterbalancing. I asked Oculus representatives about what is powering the HMD, but clearly it is too early for them to comment. Whatever is under the hood fits in the front part of the headset, and it provides an experience that is materially better than Samsung’s Gear VR or lesser-known Pico Neo VR. 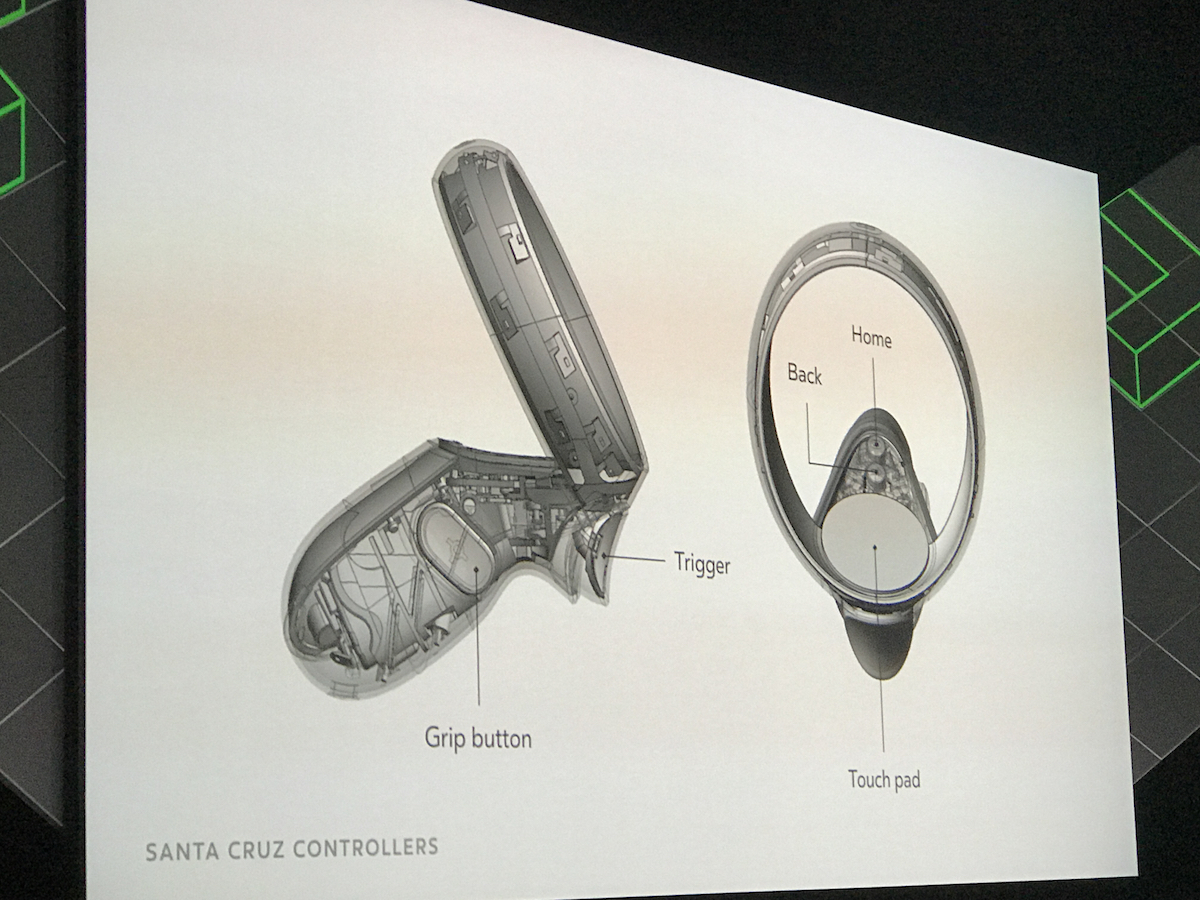 Oculus’ Project Santa Cruz VR HMD Prototype is definitely not ready for primetime. The controllers are brand new with a rethought industrial design, but the most important thing for me is tracking. The HMD features four wide angle camera sensors that definitely have a solid field of view, but I did experience loss of tracking during the Boundless demo. It is impossible for inside-out tracking to have perfect controller tracking because of occlusion, and it was my duty to test it out.

I think Oculus has done a better job than many other manufacturers with solving this problem by having the controller stop moving when it is out of your line of sight and then popping back into place almost imperceptibly. It was when I put the controllers behind my back that I noticed the loss of tracking, and it will be on software developers to make games differently for this device than they would a Vive or Rift. The controllers themselves felt great in my hands, although neither demo featured the touchpads that have replaced Oculus Touch’s analog joysticks. It shouldn't be too hard for developers to update apps to work for these controllers whenever this bundle ships and I did confirm that virtual buttons can be mapped to the touchpad.

Oculus' Project Santa Cruz VR HMD is the largest step forward in virtual reality that I have witnessed since the introduction of Valve’s Lighthouse tracking system and Oculus’ Crescent Bay Prototype. It is more apparent than ever that we are still very much so in the early days of VR development, but Santa Cruz has made me more excited than ever for the future of virtual reality.

NEO: The World Ends With You review - Game on
Login / Register