Hearthstone: Knights of the Frozen Throne - How to beat the Lich King

The first two weeks of Hearthstone's Knights of the Frozen Throne single-player content have been fun, but somewhat on the easier side of the game's Adventures. The bosses have been challenging, but not overwhelming.

That all changes with the Lich King. This big bad is ready to throw everything out there and, on top of that, he's a no-good dirty cheat. Depending on which class goes into battle, the Lich King will have a specific spell in place to institute a massive handicap. Fortunately, there are still ways to beat him and there's a big reward in doing so. Defeating the Lich King with all nine classes will grant players a playable Arthas Paladin hero.

Shacknews is here to offer individual class tips on defeating The Lich King. Certain classes will have better strategies than others, but here are a few items of note to jot down before running into the final battle. 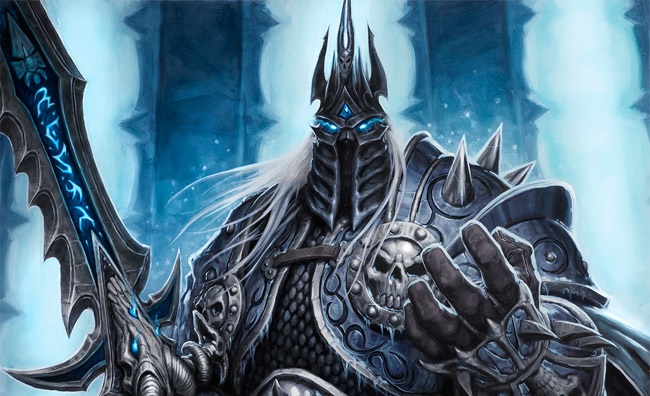 GENERAL TIPS:
-You will always go first, so there's always a chance to throw up an opening shot before the Lich King casts his cripping opening play. This becomes important with the Mage and Shaman.
-It's all Wild, so any powerful spells or Legendaries from old expansions can (and sometimes should) come out to play. Kel'Thuzad, in particular, can be a godsend for certain decks.
-THIS IS IMPORTANT! The Lich King's Turn 7 will always be Frostmourne, where he'll introduce a 5/3 weapon that cannot be destroyed unless his six 2/6 Trapped Souls are cleared first. The Lich King has no counter for Turn 7 Doomsayer, so keep one handy at all times.
-After the Frostmourne phase, the Lich King's Remorseless Winter Hero Power puts players on a timer, as it's a 0-mana play that causes gradually-increasing face damage. The clock is ticking, so take him out. (And don't try to be clever by playing Mindbreaker, because that won't work. Trust me.)
-While skilled decks are a big part of this fight, luck plays just as big a part in winning. Don't be afraid to hit "Restart" if you don't get the right opening hand. Even if things do go your way, the Lich King can also play Obliterate at any time and turn your game plan upside-down. Also, hope for the best after taking out a Skeletal Knight, because the right Frozen Throne card drop can be the difference between victory and defeat.

With all of that said, let's get started.

This is arguably the easiest of the nine fights, mainly because the Lich King's cheat isn't much of a cheat at all. It just means no emoting. That's it. Pretty simple.

Priest has so many removal tools that the Lich King can't stand up to them. A standard big body Priest deck should do the trick, so use Shadow Essence and Barnes to introduce big bodies like Y'Shaarj, Rage Unbound, Obsidian Statue, or Ysera. If they die, bring them right back with Resurrect or Eternal Servitude, where they'll get their full stats. Ysera spells, in particular, are great for clearing the board and establishing presence.

Be sure to also pack Shadow Word: Horror, because it'll make quick work of the Lich King's Trapped Souls and make the Frostmourne phase go in the blink of an eye.

Now things get harder, because this requires a lot of luck. A Control Warrior should help this fight go a lot easier, but truth be told, this is going to require a lot of luck. Use Brawl to keep the Lich King's board under control. In a pinch, use it if that Turn 7 Doomsayer isn't available. Another surefire control method involves Violet Illusionist and Fool's Bane.

This is the first fight where Kel'Thuzad becomes your best friend. Lay down Taunt minions like Fierce Monkey or Sludge Belcher and if they make it through a turn, drop in Kel and keep them coming back. At this point, if there's enough board presence, drop in Armorsmith and use Whirlwind and Ravaging Ghoul to stay armored up and ahead of the Lich King's killer Hero Power. The Lich King might even help your cause with Blizzard, adding to your armor total. If Kel stays on board, keep hammering away.

Good luck on this one! You'll need it!

The Lich King's cheat: Purge the Weak - Destroy all enemy minions that cost (3) or less, wherever they are.

The Lich King thinks he's taken out the Druid's opening plays, but this simply encourages some standard Jade Druid play. Start ramping up out of the gate with Wild Growth, Jade Blossom, and Mire Keeper. Once the Druid is sufficiently ramped up, get to work with Gadzetzan Auctioneer and those Jade Idols. Ultimate Infestation is vital in getting this ball rolling.

The Jade Golems should be pretty sizable, even during the Frostmourne phase. They should easily be able to stay ahead of the Lich King's Remorseless Winter pace and take him down with little trouble.

That spell sounds really bad, but there are some ways to turn the tables on the Lich Cheat.

Pack a Kabal Lackey and play Mana Bind to get the spell for yourself. Don't use it just yet, because it can offer some valuable fuel for Flamewaker. Granted, it's possible to use Counterspell to avoid the whammy entirely, but maybe don't go with that idea so much. I'll explain why in a second.

Be sure to pack Ice Block, because there's always a chance something can go wrong in these fights, especially at 1 Health. But hey, as long as the Mage is only down to 1 Health, I guess that means it's time to play some free Molten Giants! Yes, the Molten Giant costs go down to zero, thanks to the Lich King's spell. Hit him hard and hit him fast, because with Giants on the board out of the gate, it's entirely possible to finish this fight before hitting the Frostmourne phase.

This will definitely take a few instances of hitting the "Restart" button to get the right opening hand, but once it's there, get to work.

The Lich King's cheat: The Hunter - Deal 2 damage to your opponent for each minion in their deck.

Yes, it is entirely possible to lose this game in the first turn if there are too many minions in the Hunter's deck.

There's no way around this, because Hunters simply need minions to make this work. Fortunately, there are some workarounds. Hello, once again, Mr. Molten Giant. Use Molten Giants to go face and as a massive wall, with the aid of Sunfury Protector. Scavenging Hyena should also help move things along swimmingly, especially if enough Alleycats trade into the Lich King's minions.

This is another one that's going to require serious luck, because this fight needs to end quickly. The Hunter doesn't have enough viable removal spells to withstand the Frostmourne phase and that's where things will quickly fall apart. Come out swinging with the Molten Giants and Scavenging Hyenas, because the goal is basically to have this fight finished before that critical Turn 7.

The Lich King's cheat: The Price of Power - Destroy every spell in your opponent's hand and deck.

The Lich King is very thorough here: No spells allowed at all! And don't think it's possible to get around this with Swashburglar or Undercity Huckster, because they'll only offer Coins.

With that said, the name of the game is control. Use cards like Volatile Elemental and taunts like Deathlord and Sludge Belcher to keep the Lich King's board at bay, while building up Jades and hitting hard with Tomb Pillager. Be sure to have that Turn 7 Doomsayer at the ready.

After the Frostmourne phase, look to play N'Zoth, the Corruptor as soon as possible. He'll hopefully resurrect enough taunts to further keep the Lich King out of reach. If enough of those taunts survive, play Kel'Thuzad, which should keep the Rogue's face out of reach for the rest of the game. It's not over yet, because Remorseless Winter is still hitting harder each turn. Keep going face and hope for the best.

The Lich King's cheat: Fallen Champions - Whenever an enemy dies this game, take control of it.

It's time to introduce some shenanigans!

The Paladin's one-turn kill combo with Auctionmaster Beardo should be the way to go here, but getting there is half the battle. Pack any three 1-mana spells and Emperor Thaurissan, playing the Emperor when the time is right to discount all of those cards.

As for getting to this point, play multiple minions with user downsides. This means Zombie Chow, Tentacle of N'Zoth, Unstable Ghoul, and Explosive Sheep, all of which will help keep the board empty. The Turn 7 Doomsayer is more critical than ever here, because not only will it wipe out all the Trapped Souls, it'll then go over to the Lich King's side of the board and proceed to wipe out any minions that he might have re-summoned.

Maintain further control with Wild Pyromancer/Equality. Keep the Paladin's health up and draw those precious winning condition cards by using Lay on Hands.

The Exodia play takes some patience, but it's worth it for the final result.

The Lich King's cheat: Necrotic Plague - Set minions in your opponent's hand and deck to 1/1.

Get ready for the Murloc rush! Quest Shamans should have a field day here, although those without the Quest should fare just fine, as well. Regardless, Murloc Tidecaller should be the opening play, just because he needs to get buffed up as quickly as possible.

Keep the party going with Rockpool Hunter, Murloc Warleader, Coldlight Seer, and Call in the Finishers. Buff them up with Everyfin is Awesome or Gentle Megasaur and this one should be wrapped up neatly before the Lich King can hit the Frostmourne phase.

The Lich King unknowingly plays right into the Warlock's hands with this cheat. Dust off that old Renolock deck, because it's time to play.

Maintain tempo with the Warlock's myriad of removal spells, while getting as many demons as possible out there. Voidcaller is particularly useful here, since he can call out some of the big guns if he gets taken down.

Still use Doomsayer on that Turn 7 Frostmourne phase, but if Doomsayer isn't in-hand, wait things out a turn and then play Twisting Nether. By this point, things should be getting hairy, so have Reno Jackson at the ready.

The other MVP of this fight is Mal'Ganis, since his presence means the Warlock takes no damage from the Lich King's Remorseless Winter power. That temporarily stops the doomsday clock, though the damage caused by the power still increases, so if Mal'Ganis goes down, the next turn will still hurt. Of course, if Mal'Ganis is defeated for whatever reason, bring him back with Bloodreaver Gul'dan and keep right on trucking to victory.

And that's it! Once the Lich King falls to all nine classes, Arthas will be unlocked as a playable Paladin hero. Enjoy!

Any other strategies that have worked for you? Let us know in the comments.