In an achievement that has set a new world record for tape storage, IBM researchers have managed to store 210 gigabits of data per square inch on a new prototype sputtered magnetic tape. That is more than 20 times the amount of information that can currently be stored on a given surface area, also known as areal density.

The new tape, created by Sony Storage Media Solutions, shows that the technology is there to keep increasing capacity roughly every two years for the next decade. IBM has been working on progressing tape-drive technology for the past 60 years. As a point of reference, the first tapes could only store 2 megabytes of info. The new record is the equivalent of 330 million books.

“Tape has traditionally been used for video archives, back-up files, replicas for disaster recovery and retention of information on premise, but the industry is also expanding to off-premise applications in the cloud,” IBM fellow Evangelos Eleftheriou said in a statement. “While sputtered tape is expected to cost a little more to manufacture than current commercial tape, the potential for very high capacity will make the cost per terabyte very attractive, making this technology practical for cold storage in the cloud.”

The chart below, created by IBM, shows the advancements over the last 11 years. Just ignore the fact that these brilliant minds misspelled areal in the first category. They are tech masters, not editors. 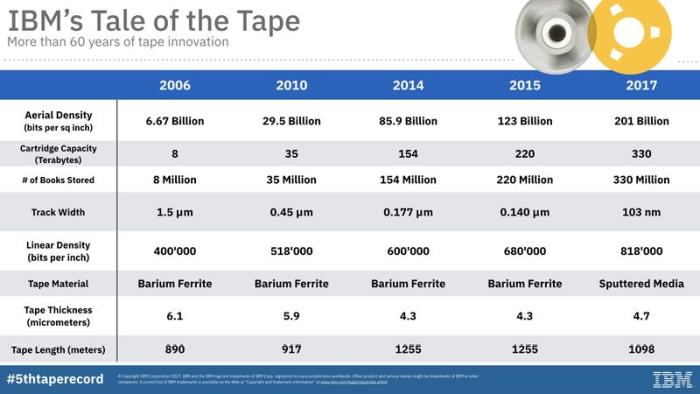 The collaboration with Sony has pushed forward some new technology improvements by IBM, which they will continue to refine going forward. Some of the advancements include "advanced roll-to-roll technology for long sputtered tape fabrication and better lubricant technology, which stabilizes the functionality of the magnetic tape.”

Check out the video below for more of an explanation: