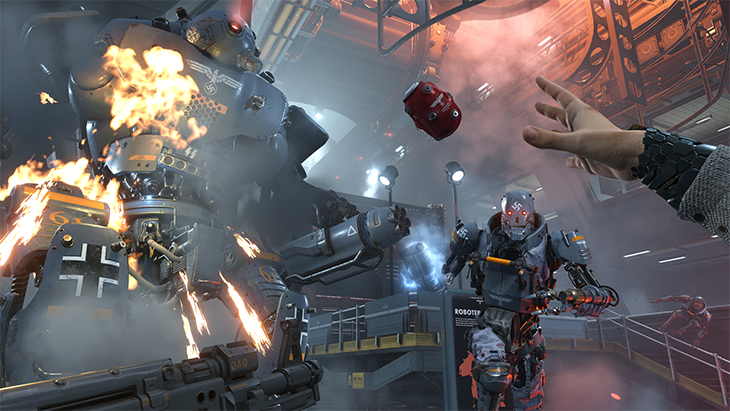 Wolfenstein 2's New Gameplay Footage is All About Nuking Nazis

Bethesda is doing a good job of building anticipation for MachineGames' upcoming Wolfenstein 2: The New Colossus. The latest piece of marketing gold is three incredibly watchable gameplay videos showing just how intense and over-the-top BJ Blazkowicz's new foray into Nazi-occupied America will be.

The videos, interspersed with several lengthy cutscenes, take place during the first mission called Reunion, and another mission dubbed Roswell, which is about half way through the game. Bethesda threw the videos into a post on its official site about 21 Things You Need to Know about the game. While many of the 21 items are standard fare for any FPS, executive producer Jerk Gustafsson and Creative Director Jens Matthies offered some insights on different aspects of the game as shown in the video playthroughs.

Blazkowicz starts the game in a wheelchair from the injuries he sustained at the end of the first game. Gustafsson said that it was an interesting challenge for the dev team, not only to show BJ's mental toughness, but also creating levels that could be traversed different ways by a character that doesn't have the full mobility of his legs. Everything from conveyor belts to rotating cogs makes it easier for BJ to get around until he is fully mobile again.

With the extended cutscenes, we also get a glimpse at what the story holds. We see that the diabolical Frau Engle is back in all her sadistic glory, dehumanizing BJ at one point, and even belittling her daughter Sigrun. At another point, in the Roswell scenes, we see Nazi propaganda on full display, the KKK openly walking the streets and Americans learning German in anticipation of it becoming the new official language. We also meet an ally who is consumed with the idea of Area 52's alien technology.

The highlight of all the videos, though, is the actual gameplay. BJ can not only dual wield again, but he can use two different weapons. He also has access to some pretty heavy-duty two-handed weaponry as well, such as Lasergewehr lasers that can be taken off UberSoldats that he kills. All of the enemies have been beefed up as well, from the common soldier to the new enemies. Even the commander system has been upgraded. "The commanders can now call for reinforcements several times, not just once or twice," Gustafsson said. "So they are even more important to kill. Also, every commander in The New Colossus now carries an enigma code. So, for each commander you kill, you can also get some important information."

Check out the full details from the blog post, but you can really get all the info you need from watching the three gameplay videos. Even if you aren't a big Wolfenstein fan you should appreciate the crazy, frenetic nature of Wolfenstein 2: The New Colossus, coming to PS4, Xbox One and PC on October 27.