Companies tend to be portrayed as faceless monoliths, but they're made up of individual people, and sometimes those moments shine through. Nintendo has done its share of good deeds, and we can add another to the list in its response to a blind Japanese fifth grader's fan letter to the company.

Hibiki Sakai was diagnosed at 1 1/2 with retinoblastoma. Several surgeries to save his life left him totally blind by age 2. However, despite the lack of sight, he has become a master of rhythm video games, particularly Nintendo's Rhythm Tengoku series. His love of the series prompted him to write the following letter to Nintendo of Japan (via his father's Twitter and translated by Rocket News).

Hello. My name is Hibiki Sakai and I am in fifth grade. I am blind, but I’ve always wanted to play video games like everyone else. But there aren’t many games I can play at all. The one game I can really play is Rhythm Tengoku. It’s the only game I can enjoy together with others, and I never lose at it. I’ve gotten perfect scores on all the versions on the Game Boy Advance, Nintendo DS, Wii, and 3DS too.

So I really, really want you to make more Rhythm Tengoku games. And it’s perfectly fine if you make them a little harder too!

I think that there are a lot of other kids with visual impairments who want to play video games but can’t. So I’d love for you to develop more games for people with handicaps to enjoy playing with others.

I will always support you, Nintendo. 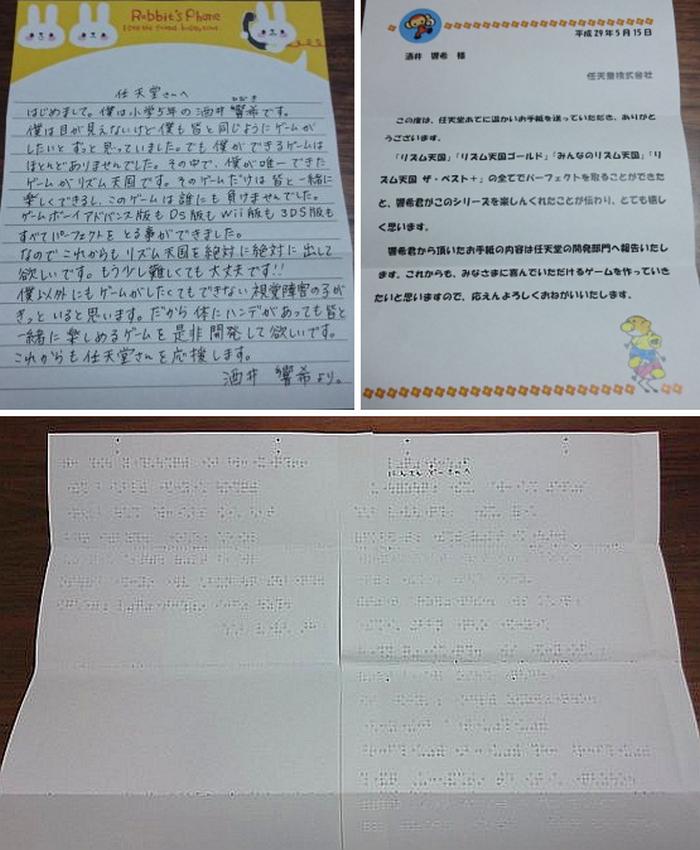 Nintendo was obviously moved by the letter because they not only responded, but took the time to translate their response to Braille so Hibiki could read it.

"Thank you so much for sending us here at Nintendo your heartwarming letter.

We have passed on your letter to Nintendo’s development department. We want to keep making games that everyone can have fun playing, so thank you for your support."

Hibiki's dad said that he amazed at his son's resilience. "It’s not having a disability that causes sorrow… but letting the disability hold you back that causes it.”

Finish off this heartwarming Monday morning story with the little 10-year-old hero playing his drums.