Starry-eyed spacefarers won't get far in their mission without understanding the fundamentals of mining for materials in Mass Effect Andromeda. From mineral nodes to motherlodes, our guide will help you get the most out of mining as well as teach you how to upgrade your nomad vehicle.

The Basics of Mining in Mass Effect Andromeda

Materials earned through mining can go toward upgrading and crafting gear for your characters. On any planet, look for rock formations that stick out in the environment like the proverbial sore thumb. These formations consist of minerals, and are usually brighter than surrounding rocks. Collect them by picking them up.

Once you pick up your Nomad, your aptitude in mining will increase dramatically. The Nomad brings nearby deposits to your attention by way of an icon that appears on your map. These icons signify larger clusters of minerals than those you come across while traveling on foot.

Head toward a mining icon on your map until the computer icon in the upper-left-hand corner of your screen begins flashing. Pull up your mining computer by pressing right on your d-pad and take note of the graphs. Those readings communicate the relative size of elements in the deposit you're chasing. 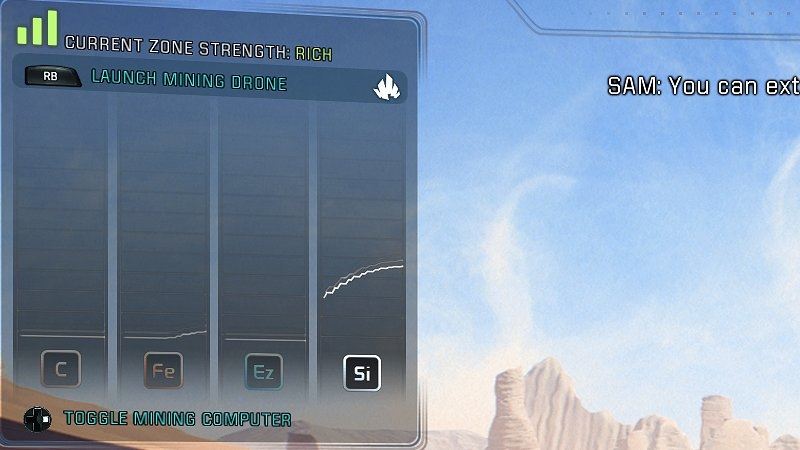 You may not see any lines on your graphs at first. Don't worry; that's the game's way of telling you that you need to push forward. Drive around and keep an eye on the readings; they'll begin to appear. Larger lines indicate larger deposits. No numbers accompany the graph, so you'll need to grow wise in the ways of reading graphs.

Once you notice a suitably large supply of the element you want, deploy a probe to retrieve it. Take notice of the orange line that encircles probes. You cannot launch other probes within that radius, which means you'll have to settle for putting one probe to work per deposit.

Your Nomad is good for more than sniffing out mineral deposits. A bevy of modifications facilitate tighter movement on terrain as well as defensive measures that may come in handy should you bump into any hostiles while exploring unfamiliar planets.

An increase of 40 percent to your ride's jump jets. The most superficial of the bunch.

Need help deciding what to upgrade once you're swimming in materials? Visit our Mass Effect Andromeda guide hub for tips, strategies, and detailed walkthroughs.