The third boss you come across in Nioh will be the Yokai Hino-Enma. This succubus-like creature comes at you a lot faster than the previous two bosses, and it takes intense concentration to be able to avoid all of her blows. This walkthrough will show you how to beat Hino-Enma and stop her from taking men's souls once and for all.

Hino-Enma not only moves fast, but she also recovers quickly too. This means you need to be able to move in, strike quickly, then retreat before she can get ahold of you. Your first instinct may be to use a spear in low stance because of its reach, but if you want to be able to do enough damage to end this fight before Hino-Enma wears you down, you'll need to use something a bit more powerful.

The best weapon to fight Hino-Enma with is a sword. Stay in mid-stance so that you have the ability to not only strike fast with a quick attack, you can also guard if the need arises. As far as armor, your highest strength defense isn't the most useful here. Instead, you should equip any Archer's gear you have. One of Hino-Enma's most annoying attacks affects you with paralysis, which can easily lead to your death.

You should start the battle with Hino-Enma on the defensive because she's very quick. Keep your distance and be prepared for one of her most dangerous attacks, the purple projectile. She'll grunt before she makes it and when you see the purple mist ring start to come towards you prepare to dodge. 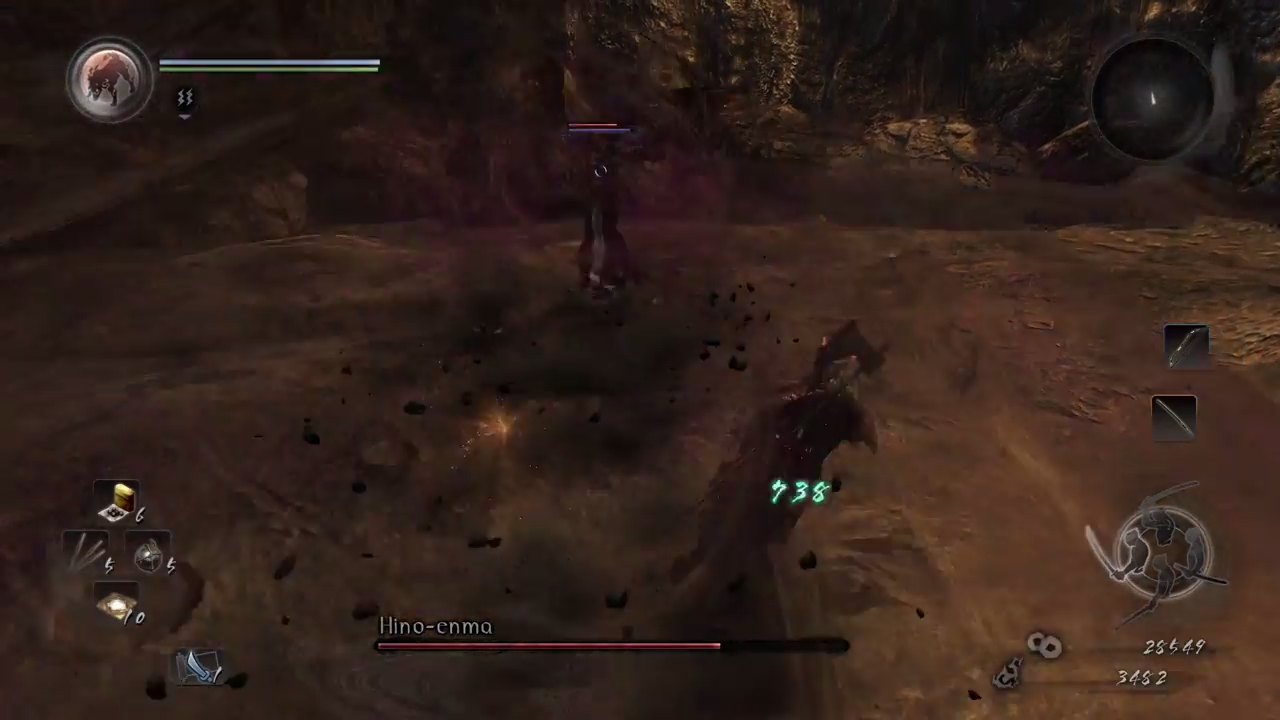 When you're dodging her paralyzing projectile you should not dodge to the side, but forward. If you dodge forward, you'll roll right under the projectile, and she'll be open for a few hits. Right after you dodge the projectile is the best time to attack and will be when you get most of your hits in this fight. 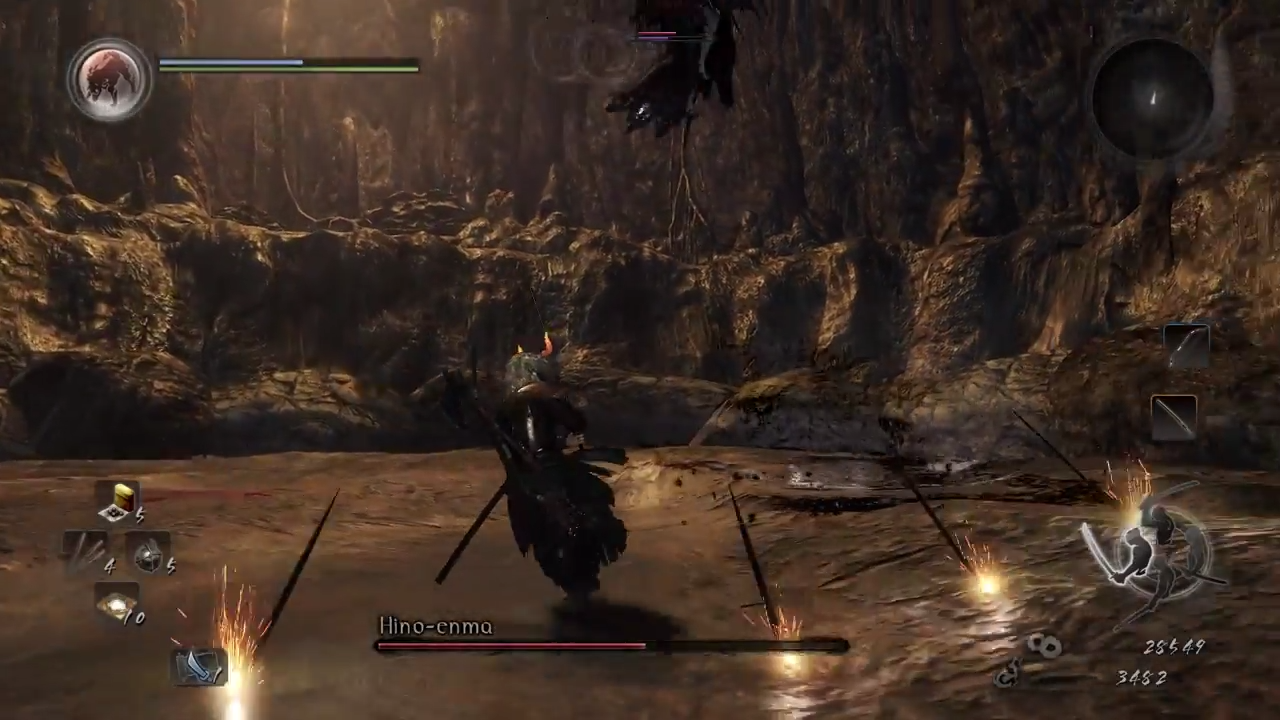 The key to this fight is only to attack when a clear window to strike is open. If you're too greedy and happen to be up close when Hino-Enma recovers from launching an attack she can use her grab on you. Hino-Enma's grab will not only do massive damage to you, but it also refills her life bar, making this fight even harder. One tactic she loves to try is to hit you with a whirlwind attack, which takes off a huge chunk of health by itself, and most of your Ki which may leave you dazed if you don't have a full Ki meter. She'll then stop right beside you and grab you, ending in your death. 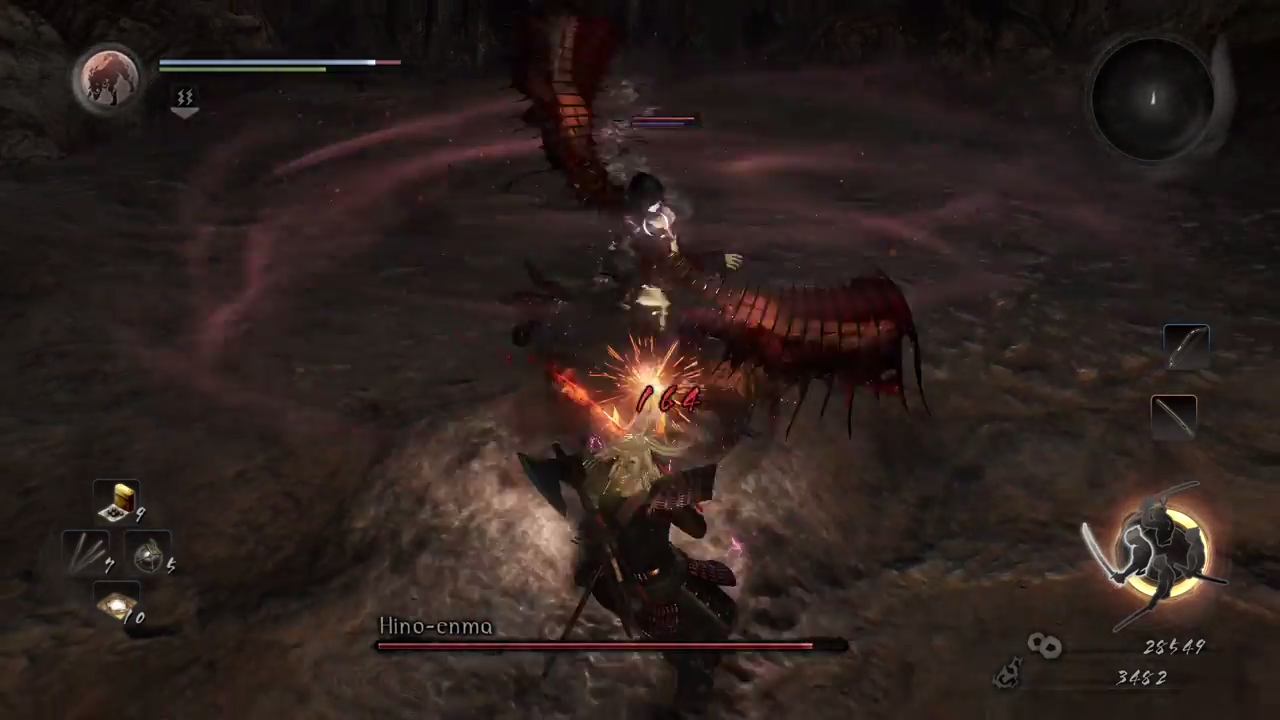 Make sure to use the Ki Pulse to avoid dying to a cheap move she pulls when William is drained and also avoid the Yokai realm areas she spawns on the ground as they prevent you from recovering Ki.

More than likely you will die at least once when tackling Hino-Enma, but don't be frustrated too much. Use each fight against her to learn her patterns of attack and continue to get better at dodging them. As long as you play it cool and attack her aggressively when possible, you can defeat her.

So now you've taken out one of the hardest bosses in Nioh, Hino-Enma. Check out our Nioh guide content for further strategies on the game.