Super Mario Run: How to Get Blue, Yellow, Red, Green, and Purple Toads

Super Mario Run's Toad Rally mode has you competing against others for Toads to inhabit your Kingdom. The various buildings and unlocks for Kingdom Builder mode depend on your getting a specific amount of blue, yellow, red, green, and purple Toads before you can buy them. However, you'll have to meet some conditions before you can gain access to the rainbow of Toad friends.

When you first begin the game, you'll only be able to acquire red Toads in Toad Rally races. As you unlock the other varieties, though, you'll be able to get up to three different types of Toads per Toad Rally race. To find out which Toads you can get in a particular Toad Rally race, you need to look by your opponent's name before you challenge them. 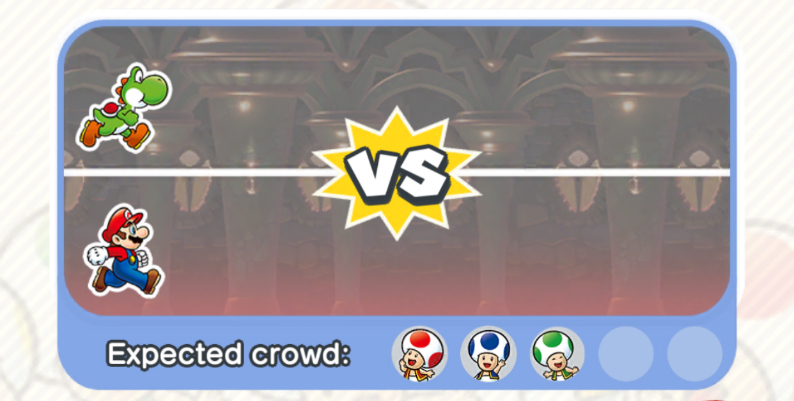 The next screen can paint an even clearer picture. As you see by "Expected crowd," there are portraits of a red, a blue, and a green Toad. These pictures let you know that you can win these colors of Toad in this Toad Rally race.

Be careful, though, if you lose a Toad Rally race, you lose Toads of the same colors as you're trying to win. If you're trying to get a certain amount of a color of Toads to unlock a building, it's possible to lose enough of a particular color that you'll no longer meet the building unlock requirements for that color either.

How to Get Green and Purple Toads

In Super Mario Run, you can only recruit red Toads in Toad Rally when you first begin. To unlock more colors of Toads, you'll have to play some of the World Tour mode. World Tour is the single-player mode which is similar to past Super Mario series games. Make it through World 1 in World Tour mode to unlock green and purple Toads.

Be aware, though, the free version of Super Mario Run only allows access to the first three levels of World 1. To unlock more than the original red Toads you'll have to pay the one-time unlock price of $9.99 to access all six worlds of Super Mario Run.

How to Get Yellow and Blue Toads

Once you unlock all five varieties of Toads, you can start working on collecting them to unlock new characters, buildings, and decorations for your Kingdom.

How to Get the Most Toads in Toad Rally

Our guides will help you learn how to be the best in Super Mario Run's Toad Rally, teach you how to unlock all the characters, and more!