The Australian setting for Forza Horizon 3 features the largest map the series has ever seen. In fact, there’s a total of four separate music festivals spread across the map, allowing you to race across its map without missing a beat. With its huge map, there are a lot of barns hidden across Australia that have rare cars just sitting there for the taking.

Forza Horizon 3 features a total of 15 rare vehicles hidden inside a number of barns. The game offers hints as to where these barns are located in the form of purple circle outlines, although we noticed these hints came more or less every hour that you played the game. By offering hints as you spend more time in Forza Horizon 3, players won’t have to worry about taking part in particular events in order to trigger these hints.

If you want to complete your collection of vehicles, you’re going to want to discover these barns as they’re the only way you can earn such rarities as the Ford Super Deluxe Station Wagon, the Reliant Supervan III, the Toyota FJ40 and more. Our list of barn finds is based on their hint number, so if you’re playing along, you should be able to find these hidden gems in no time. 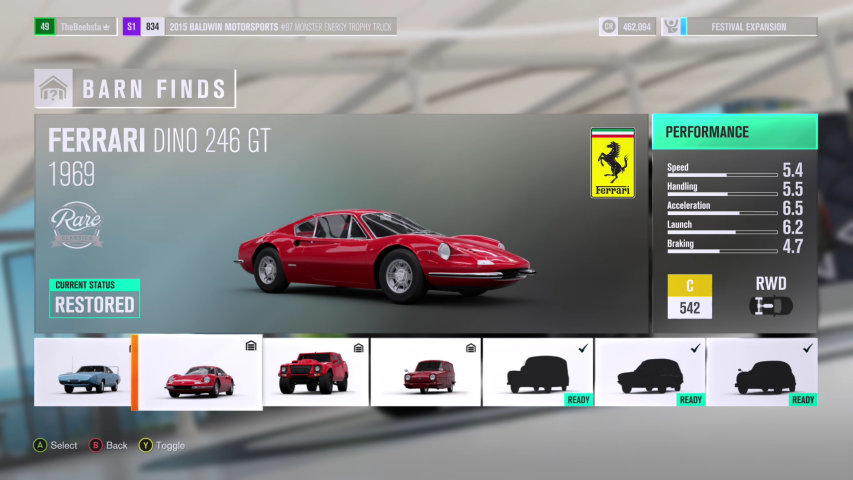 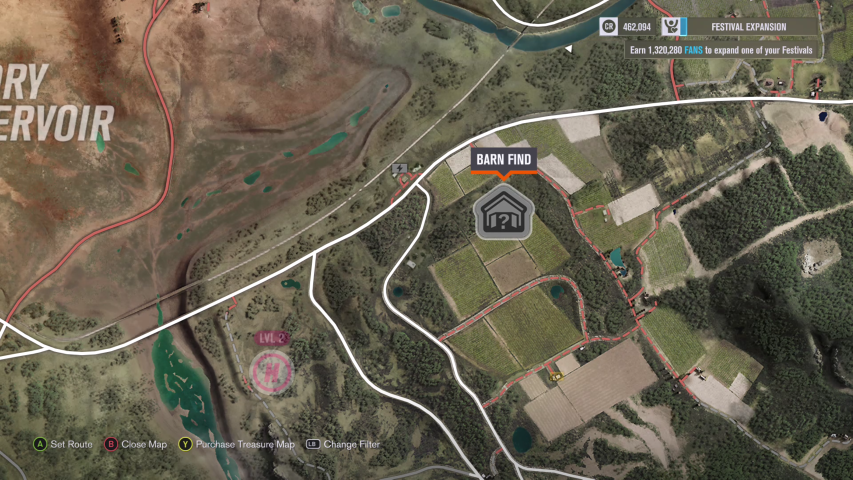 In order to pick up the first barn find, you’re going to have to head east of the Dry Reservoir text on the map where you can see a couple of fields on the map. You’re going to want to focus on the northwest area of the hint circle as you’ll need to go to the spot where the fields and trees come together. Keep an eye out for a small, brown water tower located next to some farming equipment and that’s where you’ll find the barn with the Ferrari Dino 246 GT hidden inside. 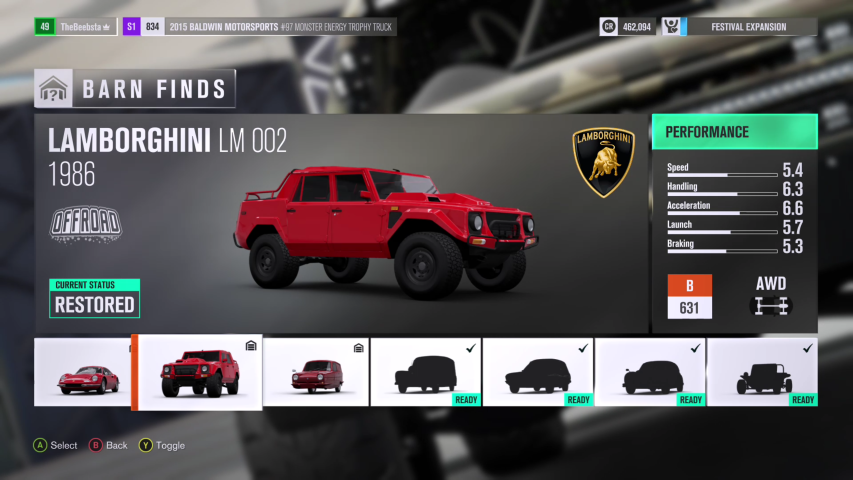 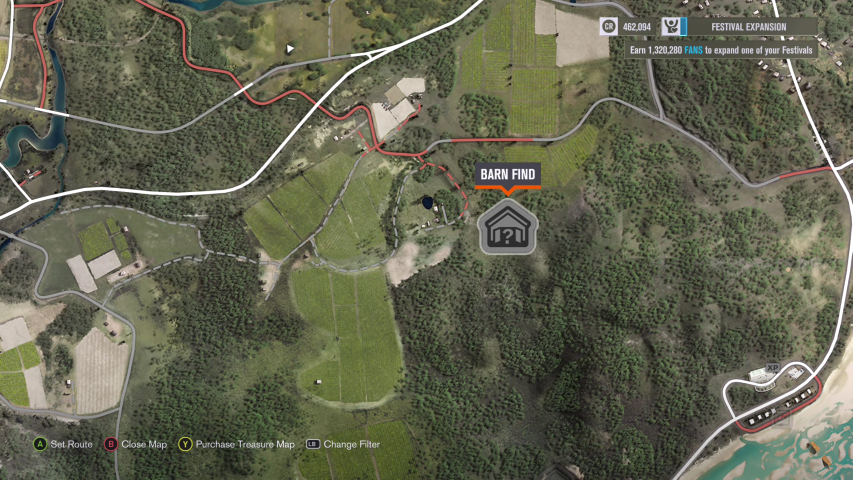 Lamborghini isn’t known for creating pick up trucks, but its LM 002 is, in fact, the first four-wheel drive vehicle the company ever made. It’s yours for the taking as long as you head northwest of the Silver Sands Shipwrecks. You’re going to want to focus on the western portion of the hint circle’s center. Once there, the barn can be located in an open area, so don’t even bother looking for it among the lush greenery surrounding it. 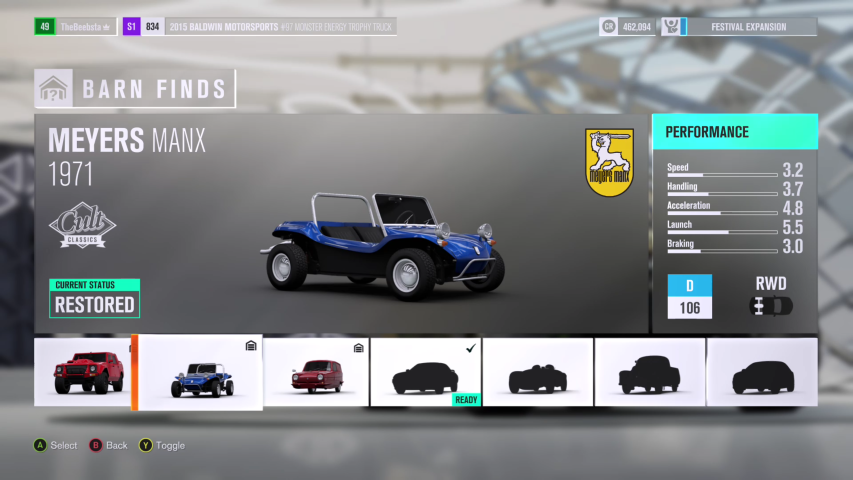 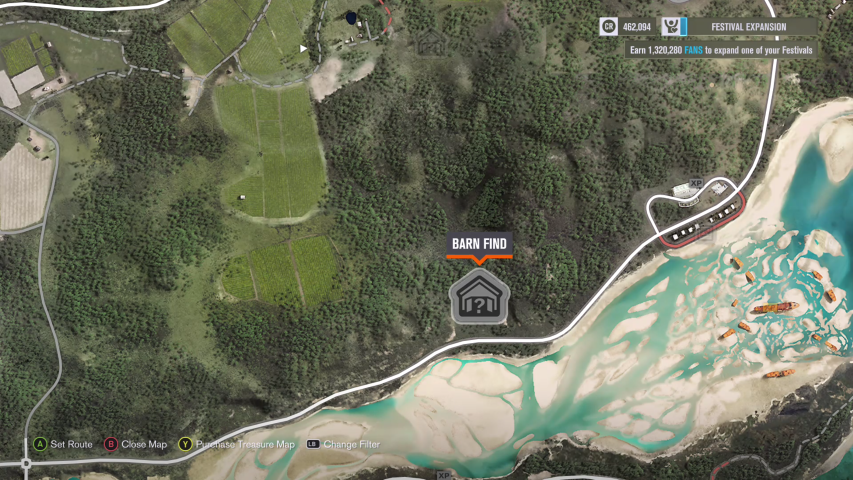 Since you’re near the Silver Sands Shipwrecks, this next barn should be easy to find as it’s located west of them and north of one of the map’s major highways, which runs from east to west. You’re going to want to focus on the northern portion of the hint circle, although you might be looking for this one for some time as there are a number of barns located in the area. The hidden barn can be seen grouped together with another barn and a few sheds. 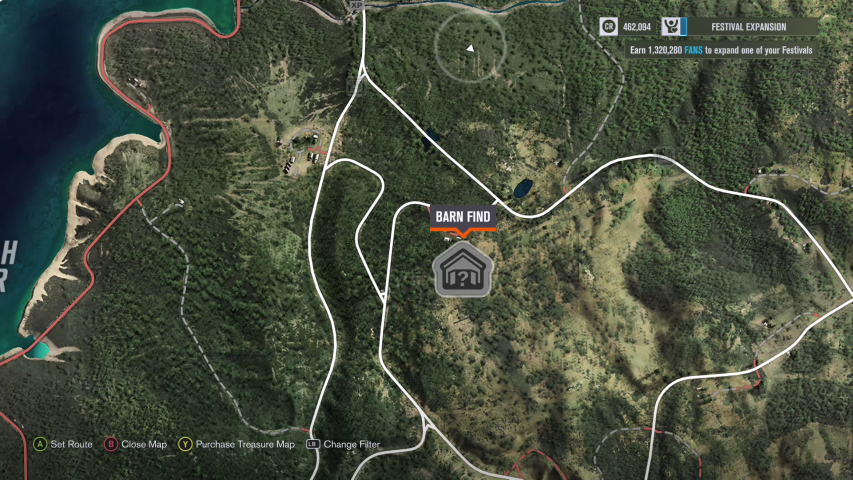 Want to take the family on a little road trip through the Australian Outback? Then the Ford Super Deluxe Station Wagon should be on your radar as it can be found just east of the Maroondah Reservoir. Focus on the western portion of the hint circle towards two off-road routes. Focus on the western off-road route as this barn is located at the end of its path near two small silos. 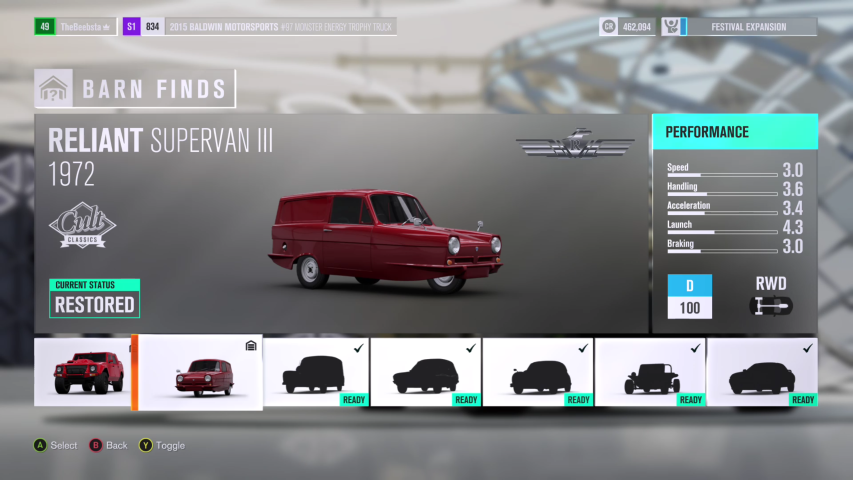 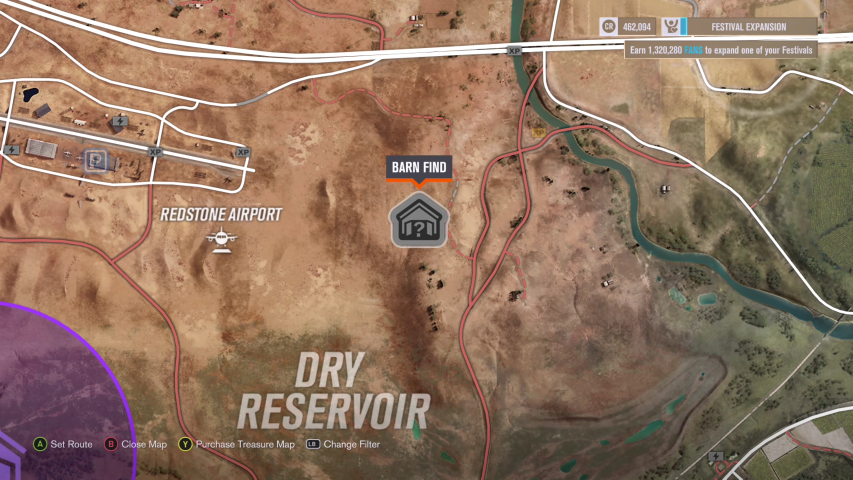 Those with an extremely steady hand will want to test their balance with the three-wheeled Reliant Supervan III, which can be found east of the Redstone Airport. Focus on the south portion of the hint circle, specifically the only off-road path within it. The hidden barn will be surrounding by some barrels on top of a small hill. 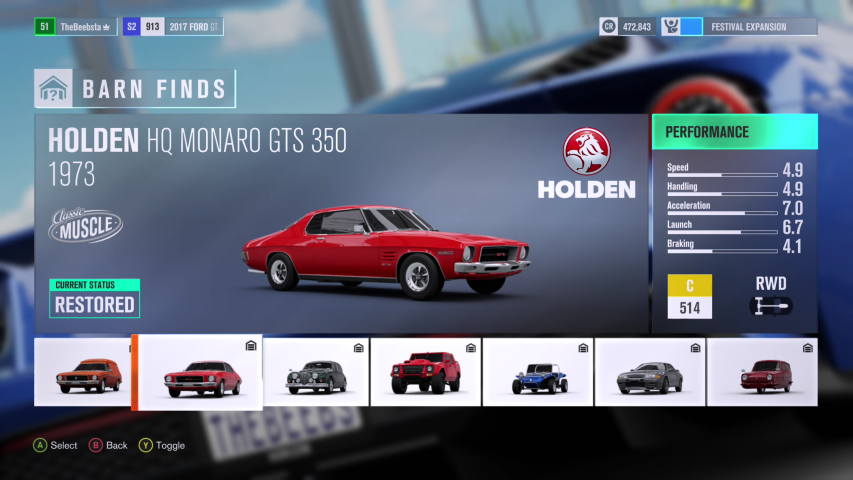 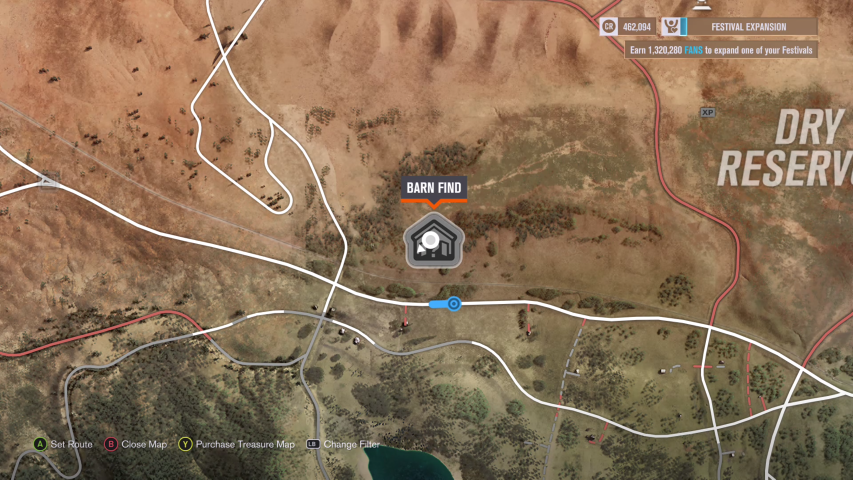 Pack your bags because this coupe is just south of the Redstone Airport located near a small cluster of sheds. Focus on the southern portion of the hint circle right below the barn icon and you should spot the hidden barn in no time. 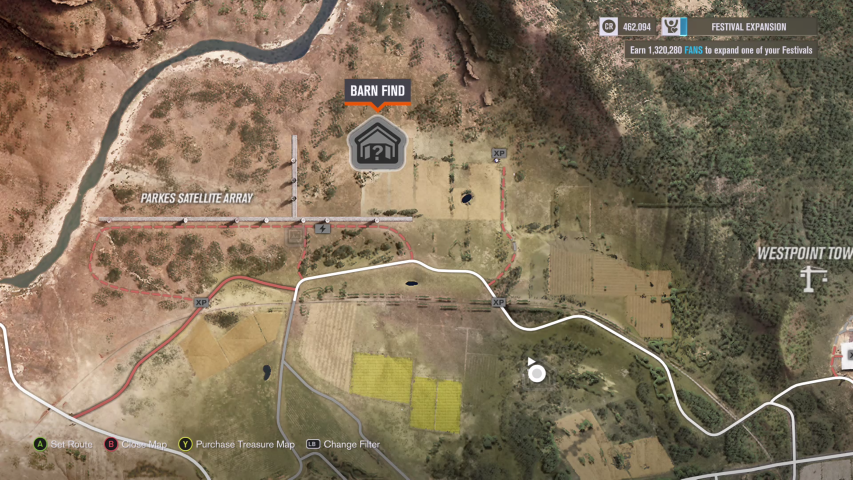 This rare vehicle can be found just north of the Parkes Satellite Array, although it’s a bit difficult to spot considering everyone owns a barn around these parts. To get here, focus on the eastern portion of the hint circle and keep an eye out for a large pond in the area. The hidden barn is located right next to that pond. 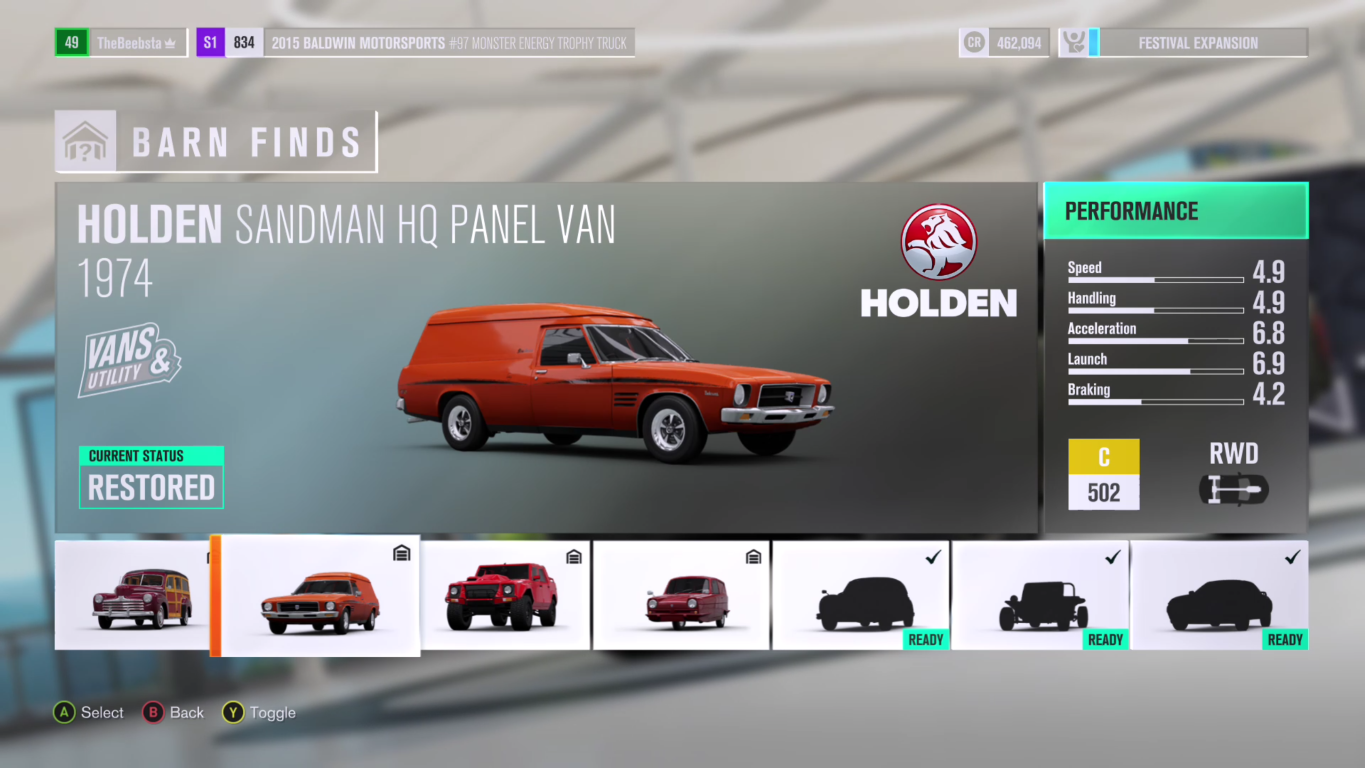 The Holden Sandman HQ Panel Van is an interesting vehicle as at first glance, it looks just like a hearse. Keep your morbidity in check as it’s really a hybrid vehicle and can be found south of the Rainforest. Focus on the southeast portion of the hint circle and you should be able to spot the barn all by itself among some trees and firewood. 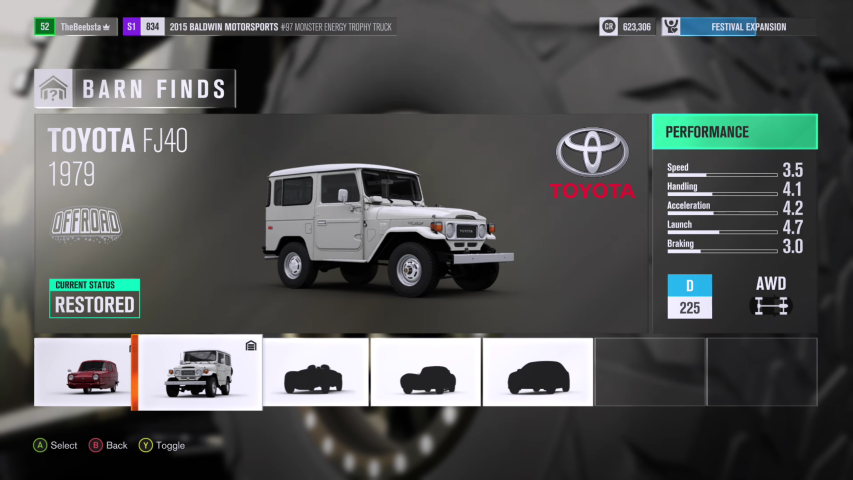 Considering we’re in Australia, it’s about time we’re given access to a rare utility vehicle, and the Toyota FJ40 is that very vehicle. Head on over to the northeast of Pink Lakes and focus on the northern portion of the hint circle. The hidden barn can be found on top of a small hill near a group of sheds. 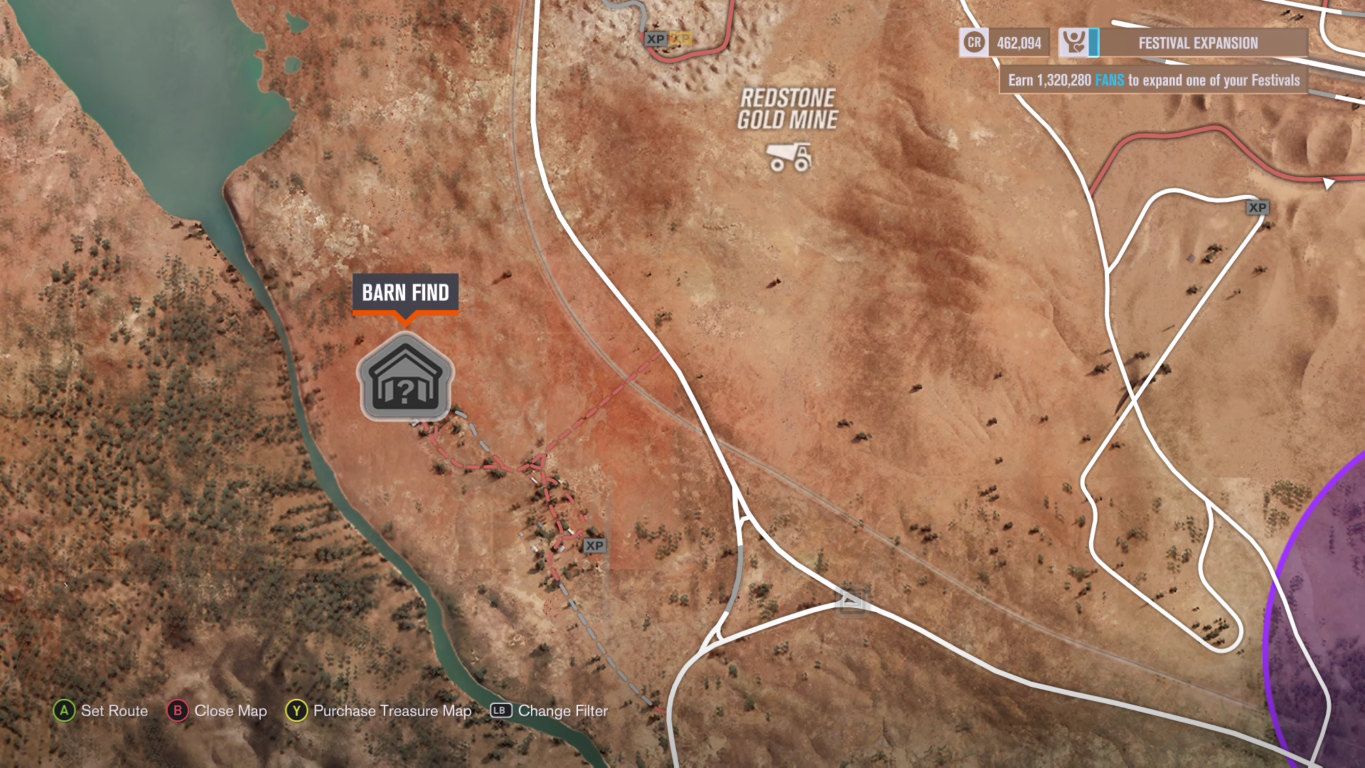 Some Aussie saved this beauty of a car from driving around in circles all day, but has unfortunately kept it for themselves by shacking it up. Head on over to the western part of Australia and focus on the western portion of the hint circle. Drive along the off-road path and you should spot this hidden barn at the dead end where some rolled hay and silos can be seen near it. 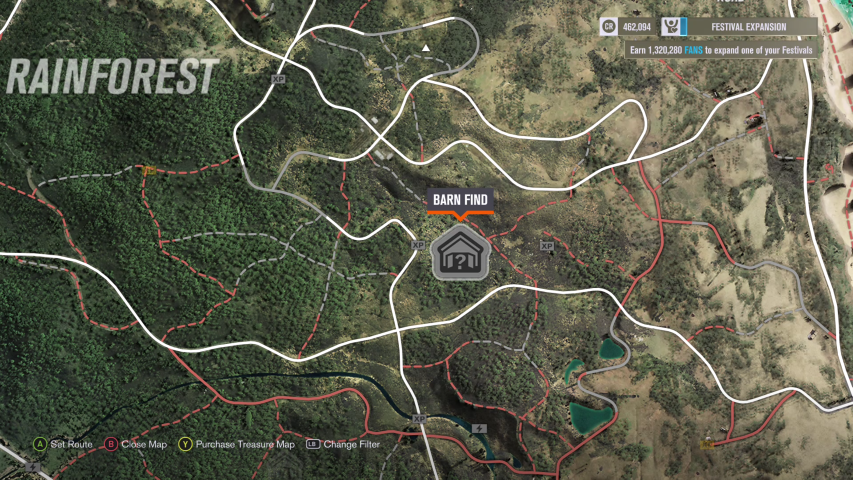 Head on down between the Rainforest and The Twelve Apostles and then focus on the northwest portion of the hint circle’s center. You’re going to be looking for a shed that’s a bit rundown, although it might be hard to spot given that the area is filled with trees. Keep an eye out for an open area among the trees and you’ll eventually find this hidden barn. 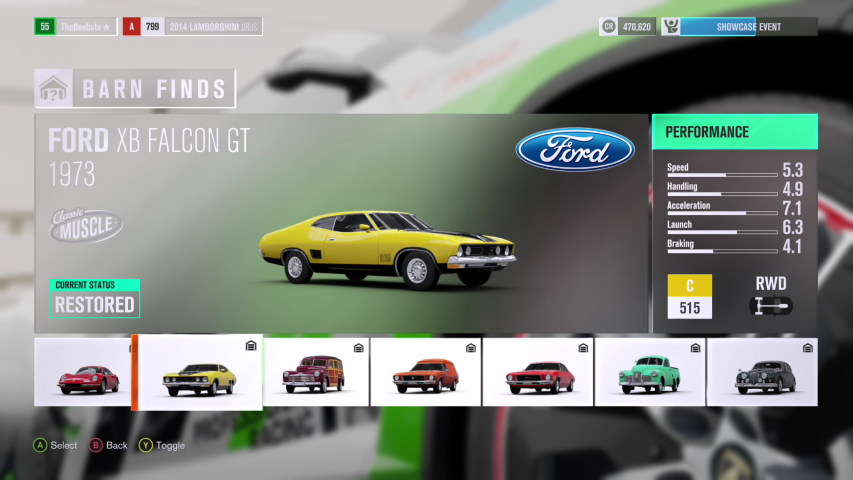 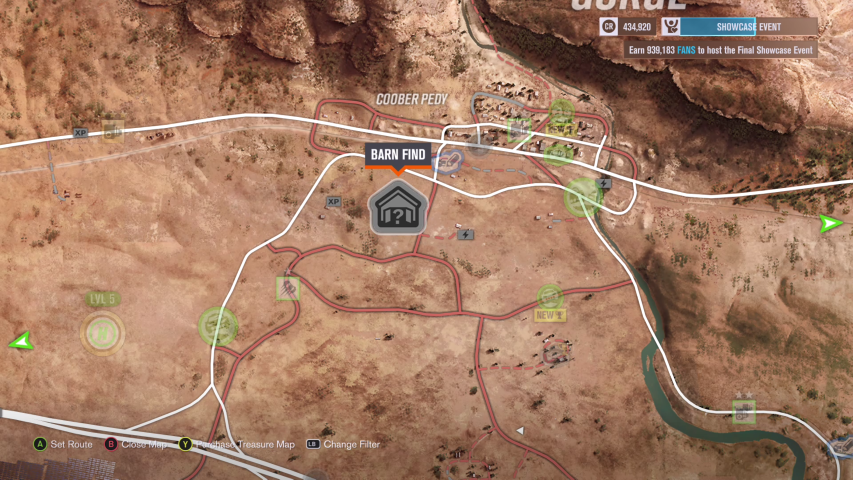 It’s about time you add a bit of muscle to your garage, and the Ford XB Falcon GT is the car for the job. Head down to south of Coober Pedy and focus on the northern portion of the hint circle. Once there, you’ll see a number of off-road routes, but follow the westmost one to a dead end. If you spot some shipping containers, this hidden barn is within the area. 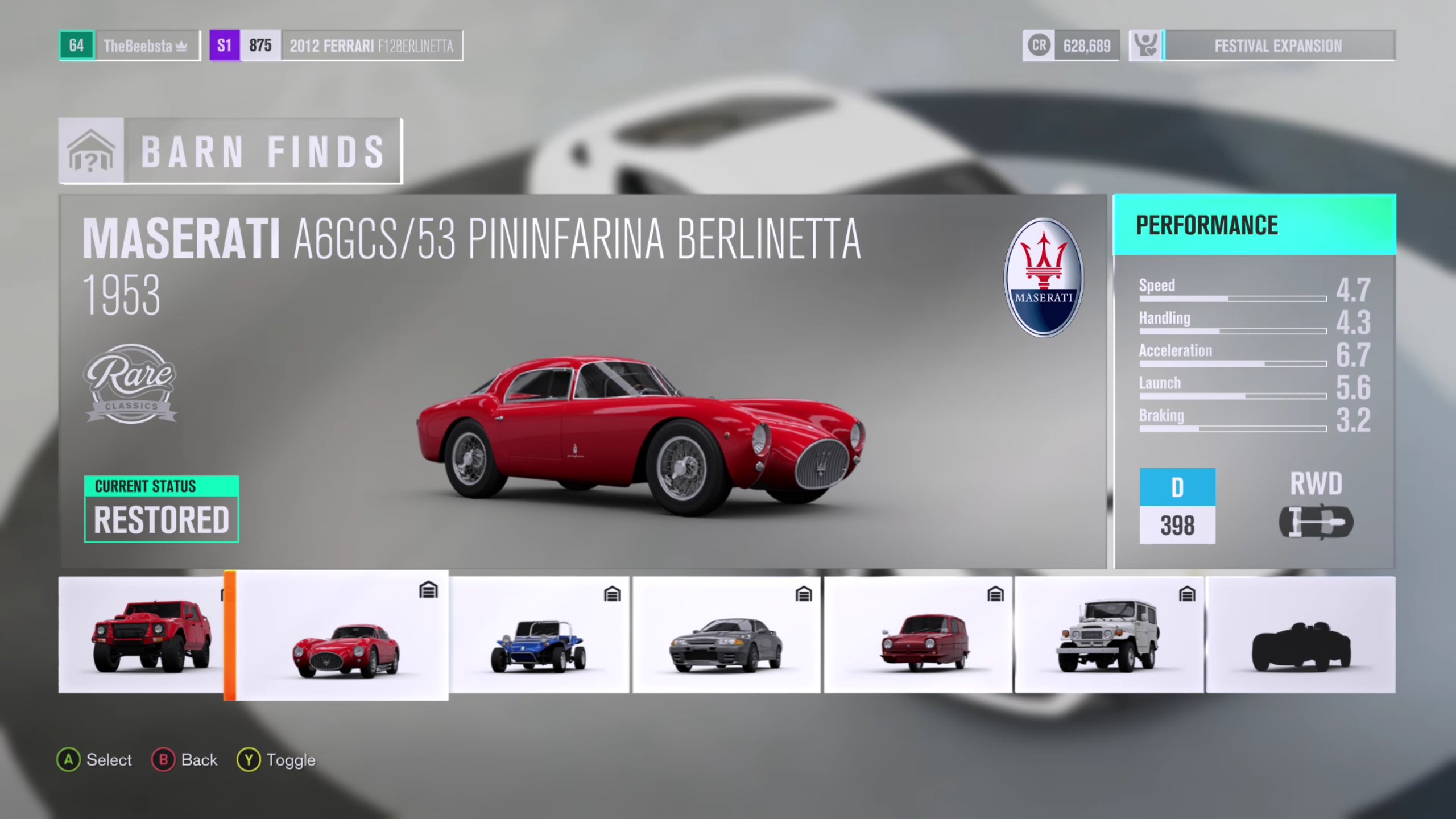 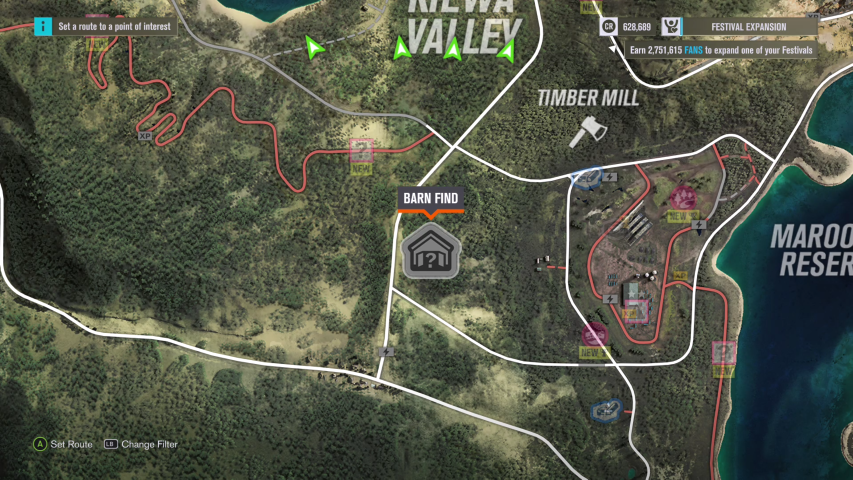 Fans of the 80s film “License to Drive” will know just how awe-inspiring a Maserati is, which is why you need to add it to your garage. Drive on over to the south of of Kiewa Valley and focus on the eastern portion of the hint circle. Considering it’s a pretty open area, you shouldn’t have to do much searching in order to locate this rare car. To find the rare barn, head to the open area just east of the highway that runs north to south. 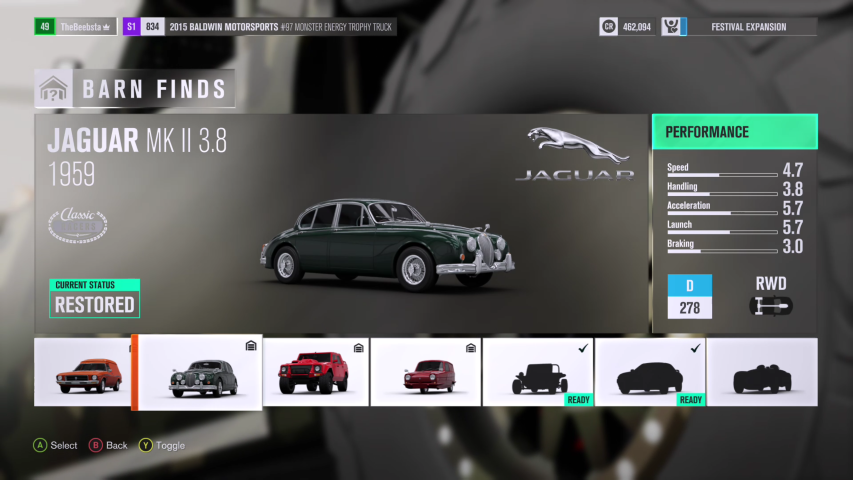 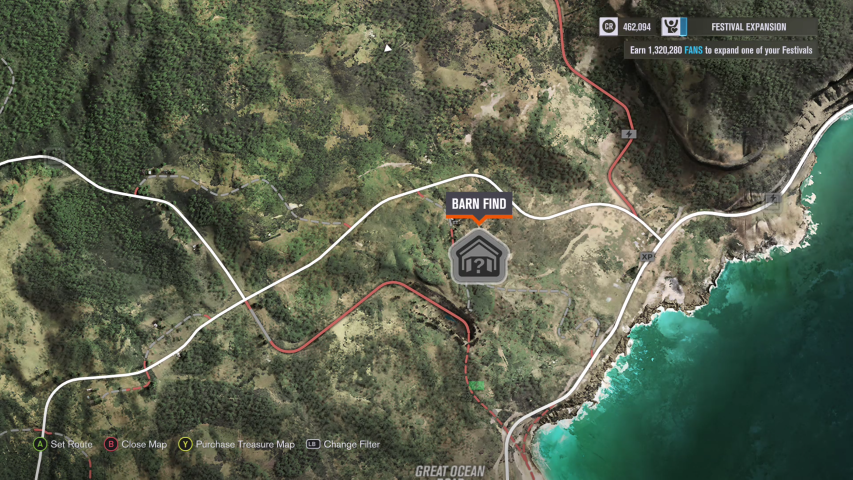 As dangerous as actual Jaguars are, the Jaguar MK II 3.8 is pretty safe to capture considering it’s just been sitting in someone’s barn for years. Head on over to the north end of The Twelve Apostles and focus on the northern portion of the hint circle. The hidden barn is located south of a pretty identifiable house with silos near it.

The final car to add to your rare vehicle collection will be the Ferrari 166MM Barchetta and is located southeast of the Parkes Satellite Array just north of the highway. Focus on the northern portion of the hint circle close to the road that runs west to east. This barn is pretty well hidden, but you should be on the lookout for a larger barn, a tractor, and some silos in order to earn yourself the final rare car.