Madden NFL 17 for PC listing pops up on Amazon [Update]

[Update: EA has responded to our request for comment with the following statement: "The listing was made in error, there are no plans to bring Madden NFL 17 to PC."]

An Amazon listing for the PC version of Madden 17 has caused quite an uproar in the gaming community.

The reason the listing is causing so many to rub their eyes in disbelief is due to the fact it’s been several years since a Madden game has released on PC. In fact, the last time PC players were able to enjoy a Madden game was with the release of Madden 2008. After nearly a decade without a Madden game, PC owners could finally be getting their own version later this Summer.

The Amazon listing shows an August 23, 2016 release date, which is the same date Madden 17 will launch on PlayStation 4 and Xbox One. It also lists a number of features for the game that we already know about, such as the Ball-Carrier Feedback System, a quicker Franchise mode, and others.

When EA announced Madden 17, it made no mention of a PC version at the time. This makes today’s listing that much more interesting. Hopefully this listing wasn’t made on accident as we’d love to see the Madden franchise return to where it originally started.

We’ve reached out to EA for comment and will update this story accordingly. 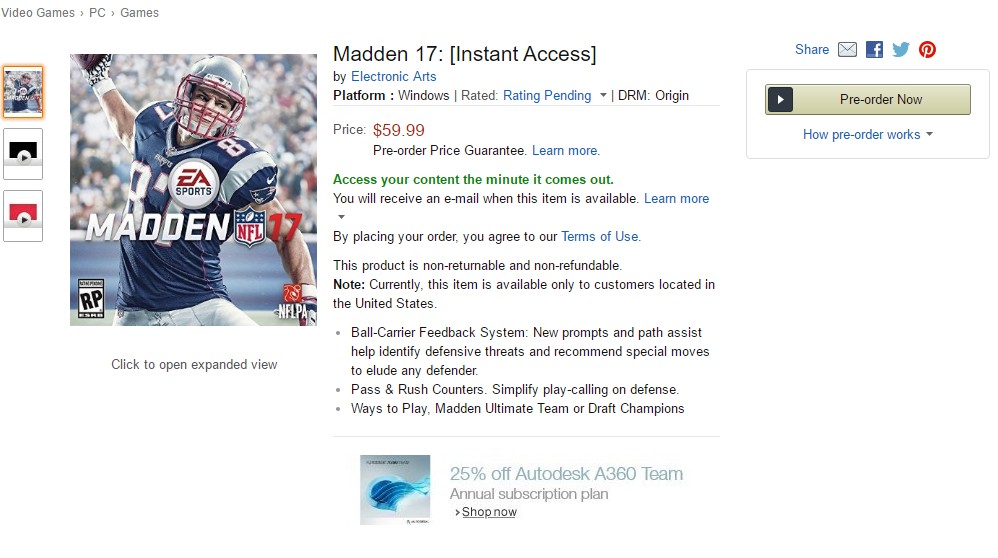