All of the New Weapons in Fallout 4's Far Harbor DLC

Fallout 4’s Far Harbor DLC is now available, complete with a new area, quests, characters, enemies, weapons, and armor. To make sure you’ve got the most comprehensive information available, here’s a look at the new weapons available in this nautical-themed expansion.

*Note: Some of these are not new weapons, but their Legendary effects add new elements to weapons like the Ripper, the Fat Man, and December’s Child.

A large, four-pronged melee weapon, the Fish Catcher can be purchased from Allen Lee in Far Harbor. It is a large weapon, capable of costing the player 40% less action points upon attack. 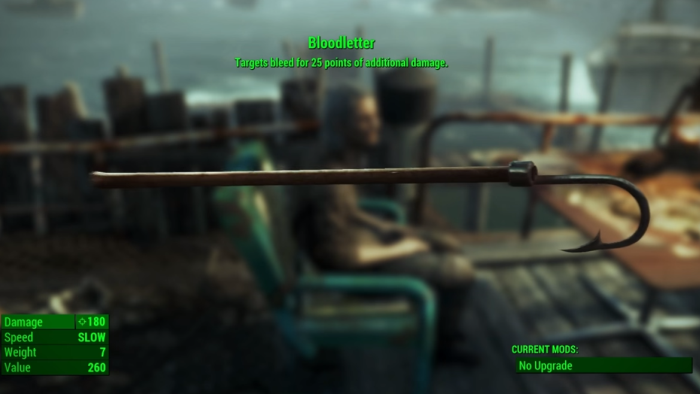 It is a cousin to the Bloodletter, a modable fish hook melee weapon causing 25 points of bleeding damage. The Bloodletter can be obtained by speaking to a woman named Cassie in a quest called Blood Ties. 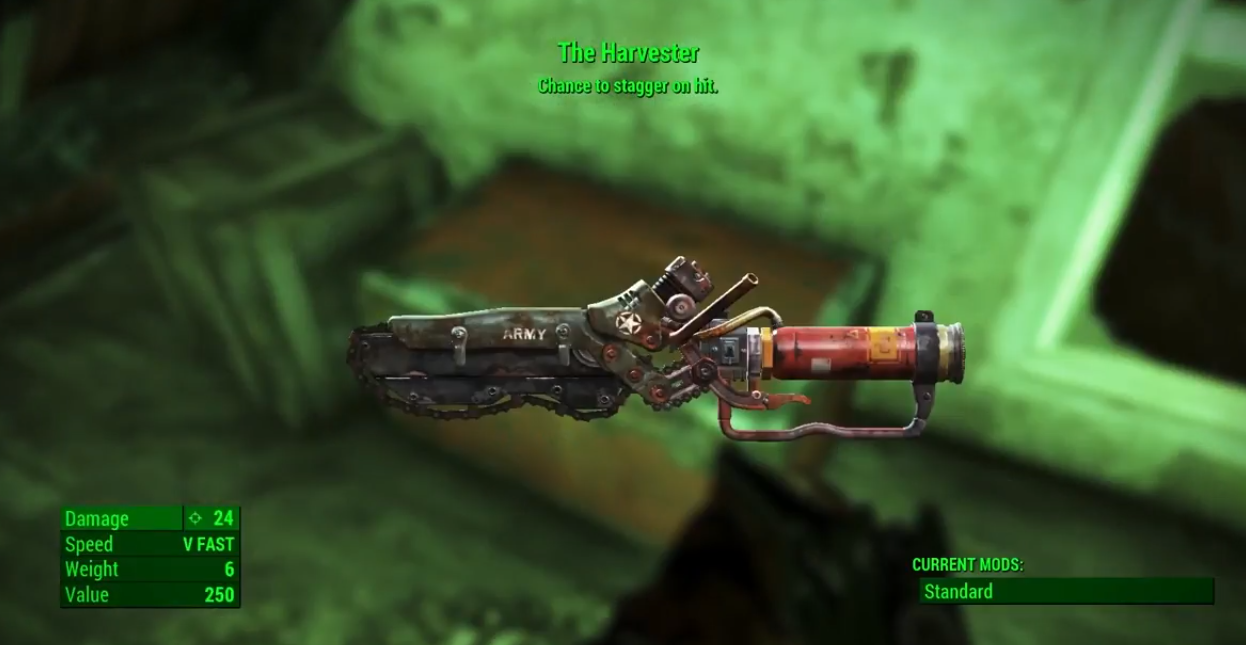 A legendary version of the Ripper, the Harvester is a wicked handheld chainsaw able to stagger enemies upon impact. It can be found in a chest located on the top floor of Echo Lake Lumber.

A laser rifle with several different available mods, the Hitman’s Institute Rifle is earned after completing “The Arrival” quest line. Its main perk is granting 10% extra damage when the player is firing and aiming down the sights. 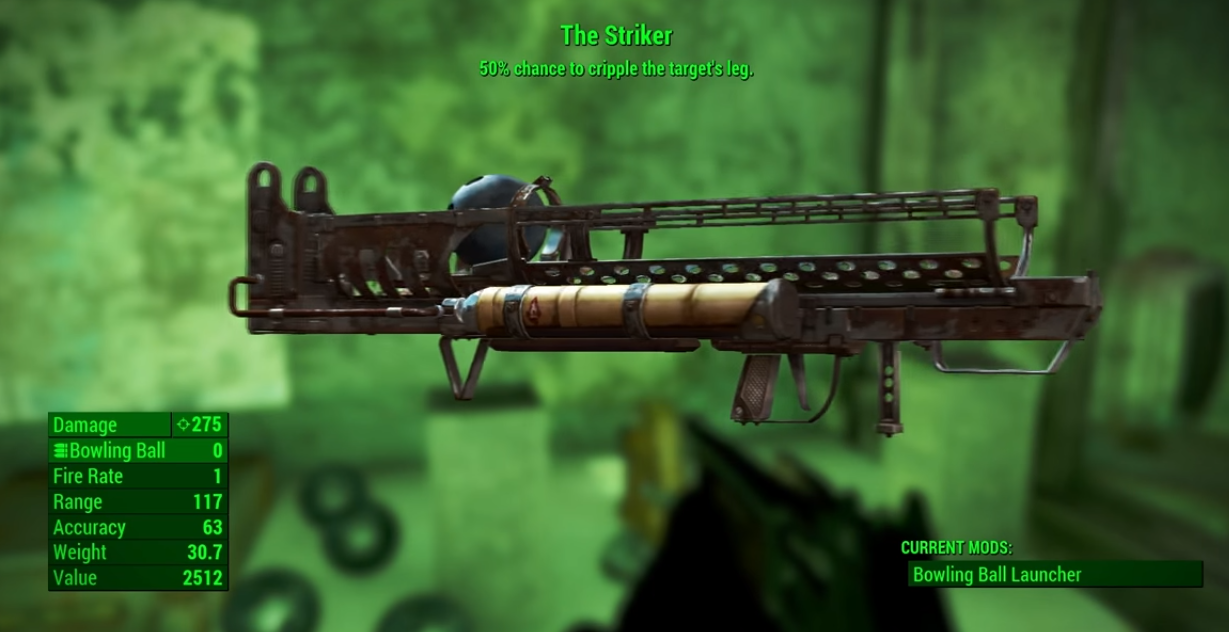 A highly-specific Fat Man-like weapon called The Striker is available inside the back room of Beaver Creek Lanes. Instead of firing small nukes, The Striker uses bowling balls exclusively as its ammunition, essentially becoming a handheld cannon. The Striker only uses bowling balls as ammo, so this isn’t the most practical weapon in Far Harbor. However, the bowling balls can be picked up and re-used many times over. 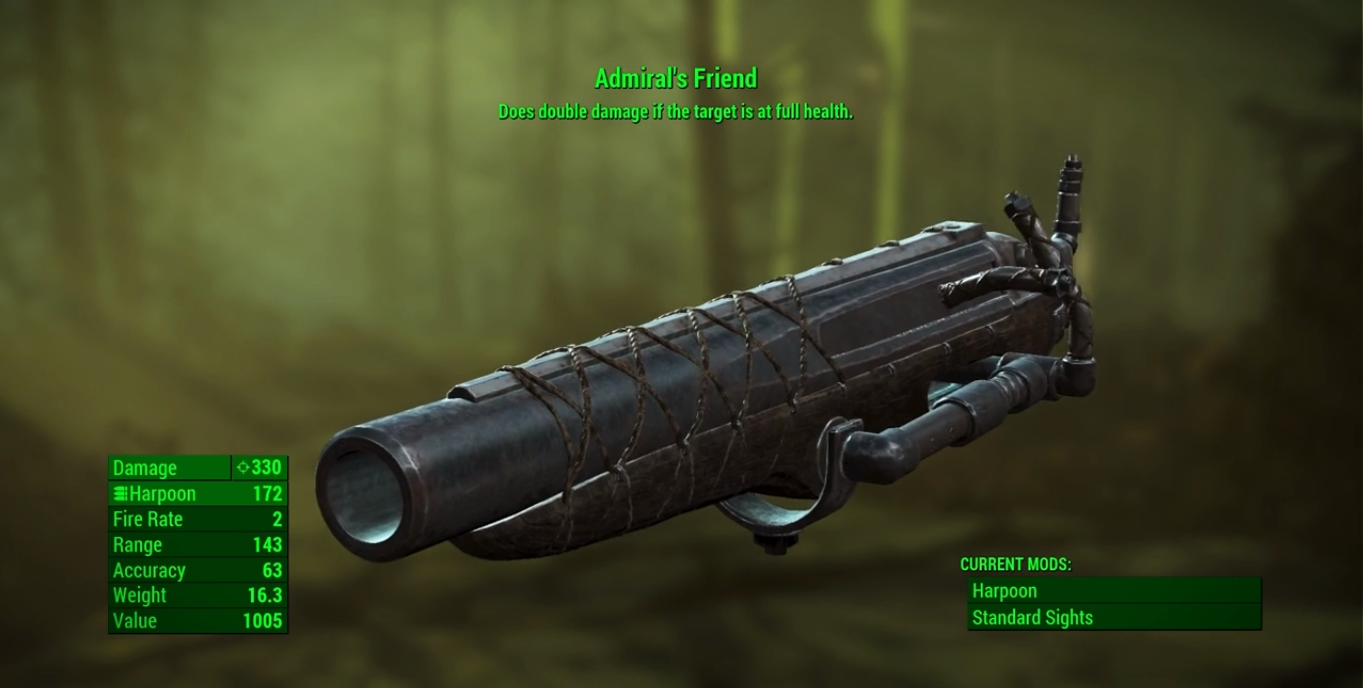 The Admiral’s Friend is a large harpoon gun that does double damage to an enemy with full health. Like some of the other weapons on this list, it can be obtained through buying it from Allen Lee.

With the potential to cause normal, radiation, and explosive damage, the Kiloton Rifle is a powerful weapon. It can be obtained through Brother Kane in The Nucleus, although the player will have to join the Children of Atom in order to purchase it. 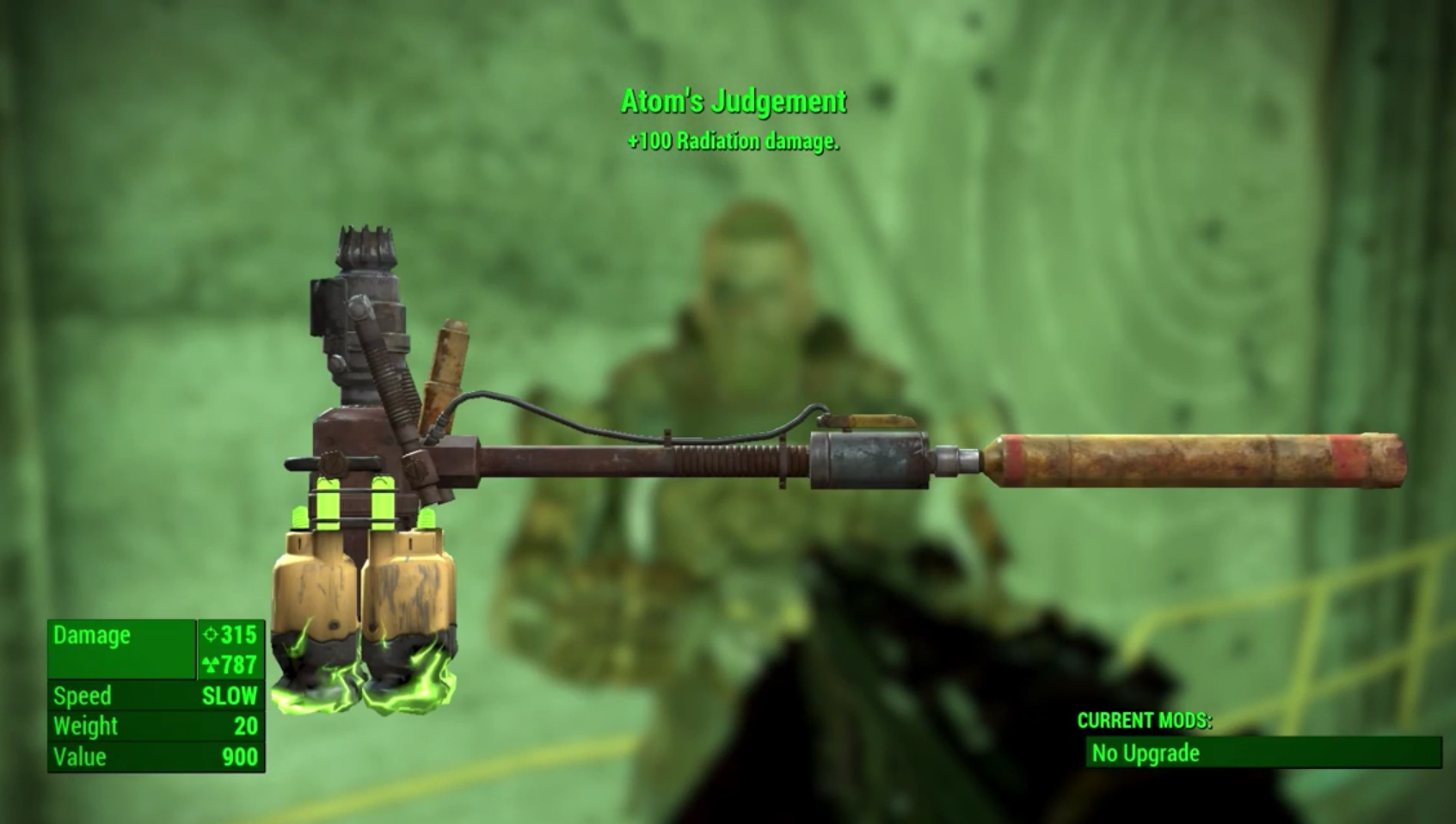 There are several weapons available to the player via the Children of Atom cult, including this radiation super hammer known as Atom’s Judgement. To get it, the player has to complete The Heretic quest in The Nucleus. 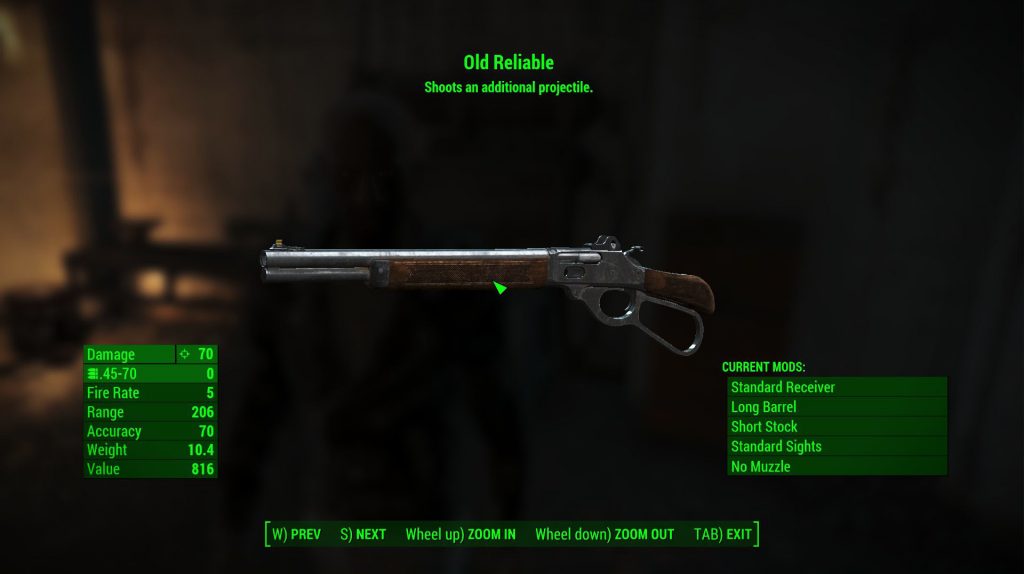 Old Reliable is a lever action rifle that doles out double damage thanks to firing two consecutive rounds. Buy Old Reliable from Dejen in Acadia. 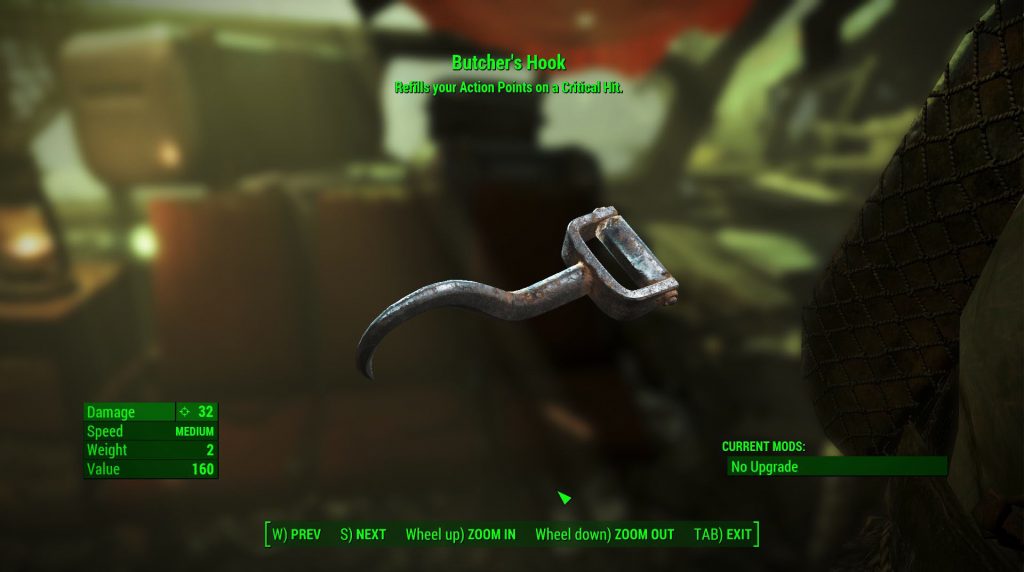 This small, one-handed melee weapon can be purchased from a Super Mutant named Erickson at the Horizon flight 1207 landing. This hook restores action points on a critical hit and can be modded to have multiple hooks.

The Harpoon Gun is a large weapon that ignores 30 percent of the target's energy and damage resistance. It is a reward for completing The Mariner quest. 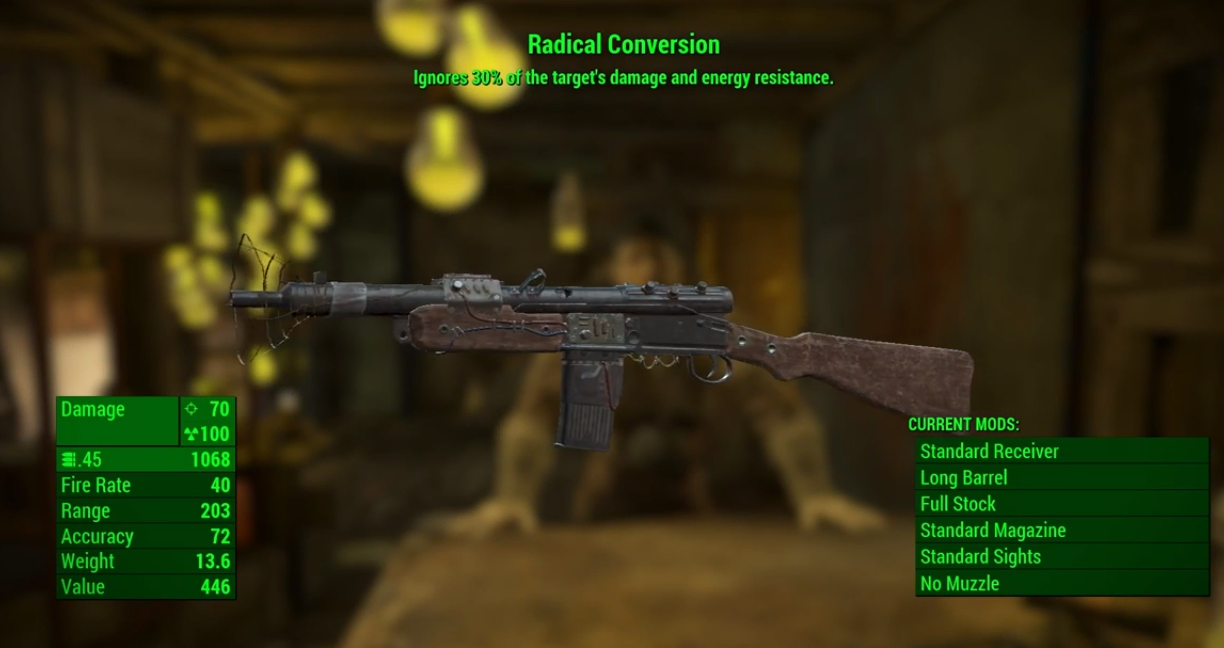 Like the Harpoon Gun, the Radical Conversion is a gun that ignores 30 percent of a target's energy and damage resistance. It can be earned by completing the Ablutions quest.

Legends of the Sea location guide - Sea of Thieves