Amplitude Review: Far From The Baseline

Before Guitar Rock Band made its triumphant debut, Harmonix was hard at work creating what would eventually become one of the greatest music gmes of all time: Amplitude.

A follow-up to the very game that laid the groundwork for Amplitude in 2001, FreQuency, players were tasked with "capturing" notes by pressing the corresponding face or shoulder buttons on the controller to conquer separate music tracks. Songs were divided into their own paths with vocals, drums, guitar, and other aspects of each song available to capture by playing a phrase perfectly. The result would be a complete song, engineered entirely by the player.

Capturing tracks perfectly and using multipliers combined to net you some astronomical scores. It didn’t require any peripherals and it introduced us all to songs that may have otherwise slipped under the radar.

While FreQuency was an interesting riff on its own, Amplitude is widely considered the better of the two games, and for good reason. Harmonix's 2015 update channels most of what made the excellent rhythm game such a prominent staple for music lovers such as myself, while improving on its many other facets in several ways. It's a much different beast than the PlayStation 2 original, but then again so are many of the players revisiting it 12 years later. 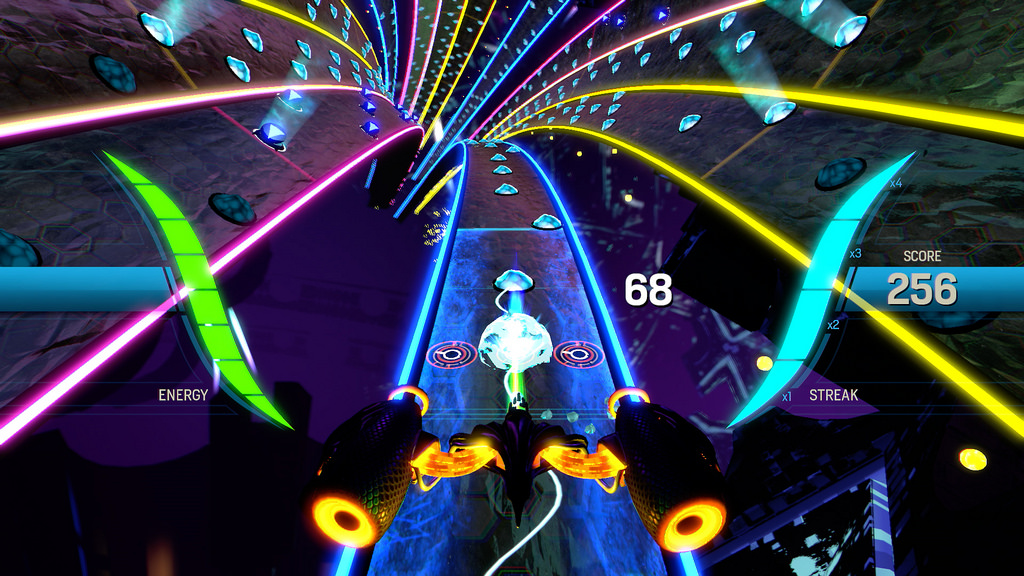 Despite the wholly different neon-colored wrapper 2015's Amplitude presents itself with, make no this reboot feels instantly familiar in almost every single way. Core gameplay is exactly the same as the original Amplitude, give or take a few tweaked mechanics.

Perhaps the most glaring alteration is the reason you're embarking on this journey at all in Campaign mode. Across a 15-track concept album comprised of tracks by Harmonix artists, you're meant to reawaken a patient's brain after it shuts itself down following an attempt to "access the physical and metaphysical secrets within." Patient Mari attempts to unlock synesthetic abilities using special nanobots that infiltrate her mind, and after it goes awry you must use the AMPLITUDE Operating System (Applied Meta-Prionics Limbic Tuning Department) to set things right.

It's a much more cerebral and surrealistic effort than the old Amplitude's premise, which basically amounted to "be a DJ in this neon-colored world starring P.O.D. and Garbage," which was enough for me, but as times change we tend to appreciate different things. And I found myself very much in love with the medicinal lilt this new Amplitude had adopted.

I Want To Be Synthesized

Thankfully, gameplay hasn't really changed at all, though. Armed with your beat blaster, or the ship in which you fly through the different music tracks, you'll clear out notes that represent vocals, drums, synth, and more. Play without a single mistake for a specific phrase and the segment will be absorbed into the song. If you screw up, you've got to do it all over again. Clearing a track means you should immediately flip to the next available note along the note highway to keep a chain going.

Some sections are gated off and may only be passed without your beat blaster taking damage if you've maintained a combo. You'll have to take special care to ensure you've chained together notes long enough to avoid these checkpoints, because they can make or break a playthrough, especially when playing on higher difficulties.

There are several power-ups you can capture while playing phrases that can complete entire sections, slow down the song so you can complete a section you may be having difficulty with, and a slew of other items you can use to level the playing field as the songs progress in difficulty toward the end in the campaign mode or during multiplayer/quickplay mode. When used strategically, they're powerful crutches that can prop you up when you can't quite nail a difficult drum solo or a complicated bassline. They're all helpful, but I found myself particularly drawn to the "Sedate" power-up. Even though all it did was slow the track down, it gave the "downer" feeling you tend to associate with some drugs, and with the medical theme and the music slowing to a crawl, it made the game feel perfectly groggy.

It's all there, just as you remember it, except it's much tighter now. It's responsive in a way that's unmistakably 2015, while remaining faithful to the original game and improving on it in meaningful ways.

This vision of Amplitude is, essentially, an updated remix of sorts of the original game, stripped of the kitschy pop culture references, familiar artists, and even the "tunnel" mode that felt so right in FreQuency, but that can be restored after playing the game if you want to go back to the reliable old tunnels rather than playing with the tracks laid out beside one another.

It manages to triumph in several ways as a reimagining of one of the most memorable music games of all times, though a lack of content and licensed tracks does end up hurting its appeal. You can complete the campaign in an hour or so, and even less if you're a seasoned player. You can go back and complete the rest of the difficulties, but if you lived on Insane mode back in the original Amplitude, you'll breeze through all of the songs in no time. That's understandable since the game's only $20, but it would have been nice to see familiar artists beyond Freezepop or Harmonix's in-house team providing tracks.

As a faithful fan of both FreQuency and Amplitude, I'm satisfied with the reboot Harmonix has so lovingly crafted, but as a much different product than the loud, raucous Amplitude I fell in love with as a teenager. I won't keep returning to this Amplitude like I do the 2004 version despite enjoying the soundtrack because it lacks the same kind of replay value for me, but as its own being it absolutely stands on its own feet as a music title evocative of games like Rez or Child of Eden. If you're looking for the next evolution of classic rhythm gaming, this is it...let's just get some additional tracks added into the fold in the future.

This review is based on a PlayStation 4 download code provided by the publisher. Amplitude will be available on the PlayStation Network on January 5, 2016 for $19.99. This game is not yet rated by the ESRB.

Ratchet & Clank: Rift Apart review - A dimension above the rest