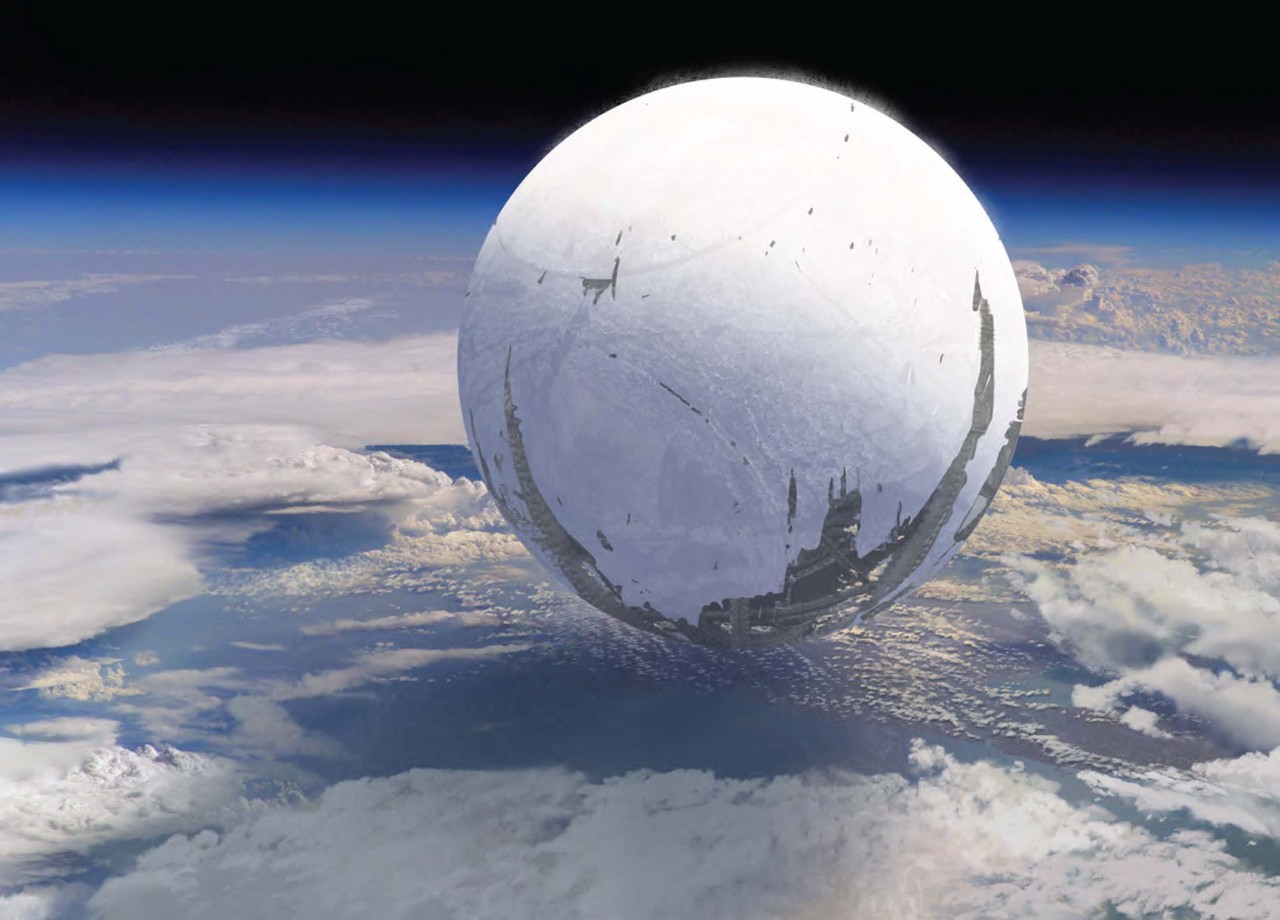 Destiny's story can be difficult to follow even for the most ardent of fans. Our own review of the original release called it an "incomprehensible melange of space mysticism." Much of this problem is due to the way the story is hidden away behind Grimoire cards, making the exact sequence of events more opaque than a standard storytelling structure. When placed in proper sequence and with the various factions and terms explained, it becomes much clearer.

Ages ago as of the Destiny timeline, but sometime in the future for us, a gigantic sentient moon-like entity called the Traveler appeared in our solar system. It uplifted humanity by sharing its knowledge and technology, which expanded the human lifespan threefold and terraformed both Mars and Venus for colonization. Humanity experienced a Golden Age, and spread across out to the far reaching stars.

After centuries of prosperity,  the Golden Age came to an end when the Traveler's nemesis, a force called The Darkness, caught up with it. This event, known as The Collapse, led to the near annihilation of the human race. Humanity was driven back to Earth, where the Traveler made its last stand against The Darkness, and sacrificed itself for the sake of the human race. Its body still hovers in low orbit over earth, hiding humanity's last remaining city (named The City) under its shadow. Although it is dormant, it still powerful enough to protect The City and bestow special powers on its inhabitants.

However, The City has come under repeated attack, and it would only be a matter of time before The Darkness or some other alien species broke through. In response, the Traveler created small, flying, sentient drones called Ghosts, which resurrected fallen beings to become Guardians. Three races were chosen for this purpose: Humans; Exos, sentient robots created during the Golden Age; and Awoken, a race born out of the Collapse. Guardians are tasked with repelling the threats against humanity in an effort to retake the galaxy and hopefully bring life back into the Traveler.

You were resurrected among the ruins of Old Russia, after having been dead a long time. After being introduced to the Traveler's advisor, The Speaker, you were brought to the Cosmodrome. Humanity once launched its outer space expeditions from the Cosmodrome, but it was now being picked clean by Fallen. You also discovered an old Russian A.I. Warmind named Rasputin. As a Warmind, Rasputin was designed to defend Earth. When you found him he was still functional, but acting with unknown intent.

Your next mission took you to the Moon to search for a lost Guardian, who died searching for a means into the Hive Fortress. By tapping the memory of the Guardian's Ghost, you learned that the Hive were preparing a massive invasion against Earth. Naturally, you quickly got to work on shutting the invasion down. You disrupted the Hive ritual used to drain power from the Traveler, destroying a powerful weapon called the Sword of Crota and disrupting long-range communications in the process.

This raised the question of who the Hive were talking to. Your Ghost suggested that they were communing with their "god or king" but won't be doing so anymore. Shortly thereafter, a mysterious woman commonly referred to as Exo Stranger contacted you, asking you to come to Venus to face a new enemy.

On Venus, Exo Stranger introduced you to the Vex, a robotic hive mind race called "an evil so dark, it despises other evil." She begged you to head to the Black Garden, the place where the Vex are born, and rip its heart out. Only then could the Traveler begin to heal. Your Ghost recommended that you speak to the Awoken who refused to take sides in the war, and now inhabit the Reef.

At the Reef, you met Queen Mara Sov of the Reef and her creepy brother Uldren Sov, who offered to help you locate the Black Garden in exchange for the Vex Gate Lord's head. You made your way to fight the Vex Gate Lord, eventually decapitating him and presenting his head to the Queen. She told you to bring its eye to Meridian Bay on Mars, which would open the gate to the Black Garden.

Mars was occupied by the Cabal, a militaristic race that uses gigantic exosuits to simulate the heavy gravity of their homeworld. The Cabal were also trying to break the encryption on the Vex Gate, but without much success. After breaking through the Cabal Exclusion Zone, you made your way to the Garden's Spire, where you charge up the Gate Lord's eye.

In the Buried City of Mars, you found another Warmind that has fallen under the control of Rasputin. Your ghost mentioned that "he's everywhere now," implying a darker future. The Vex had also gone to Mars, and your Ghost realized they were heading back home, to the Black Garden.

Through the Vex Gate you found the Black Garden, a city beyond the reach of space and time. The heart of the city was a very literal heart, suspended in mid-air. The Vex were worshipping it, and came to its defense by summoning three giant statues. Defeating them destroyed the heart, and thus lifted the shroud of Darkness from the Traveler.

At a gathering of Guardians, The Speaker gave a rousing speech in light of their collective victory. However, the Exo Stranger watched with a more cynical eye, and told you that the fight is just beginning.

Following the destruction of the Black Garden's heart, a trader and former Guardian named Eris Morn arrived at the Tower. Eris warned of the return of Crota, a prince that the Hive worship as a god. Eris was the lone survivor of a failed attempt to kill him, and asked current Guardians to help purge Earth of the Hive by killing the Fist of Crota. Doing so halted the Hive, but those that remained attacked Rasputin.

The battle to destroy Rasputin, known as the Siege of the Warmind, was led by an apprentice of Crota called Omnigul. She tried to flee when on the verge of defeat, but the Guardians hunted her down and and killed her.

With that taken care of, Eris declared that the Guardian were ready to confront the Hive directly on the Moon, and stop their ritual to awaken Crota from his deep slumber. To this end, Guardians sought out The Soul of Crota and destroyed it, along with the Hive Wizards trying to raise it and all the other creatures sent it to protect it.

Queen Mara Sov of the Reef ordered the Reef opened to Guardians. However, it came with a catch. Using a vendor named Petra Venj as a go-between, she recruited Guardians to hunt down the House of Wolves--a Fallen House that once served the Queen, but broke the alliance under the command of Skolas, a captain who seeks to unite all the Fallen houses under one banner. He'll do that by killing the heads of all the other houses and taking command of their troops.

You started by protecting the House of Winter, and found out that Skolas is pretty unpopular. In fact, rival houses like Devils and Kings positively hated him. They believed him to be a traitor at the battle of Twilight's Grasp, where Devils, Kings, and Winter all joined forces to take the City. They would have been successful had the House of Wolves joined them, but the Reef Queen interfered and held them back. Despite this, The House of Winter fell under Skolas's control, and his dream of becoming the fabled Kell of Kells, a mythical leader of all the Fallen Houses, is slowly becoming a reality.

After stopping Skolas's elite assassins and stopping an invasion of the Cosmodrome, you went to Old Russia with a Fallen Vandal named Variks to prevent Skolas from taking over the House of Kings. Petra communicated with the Fireteam via radio, but the signal was disrupted by multiple jammers. Guardians had to fight through enemies to reestablish contact. Eventually, the Guardians made their way to the command center, where they encountered and defeated two King Barons and a Wolf Baron. With Wolves dead, the Kings are out of Skolas's control, but remain a threat to the City.

Undeterred by this failure, Skolas launched a massive assault against multiple Vex strongholds across Venus's Ishtar Sink. His goals seem like madness at first, but his end-game soon became clear. The Wolves planned to break into the Vault of Glass, a device designed to control spacetime by harnessing the power of a creature named Atheon. The Wolves successfully breached the Vault and tried to tap into the Oracles within, giving Skolas access to the Vex network. The Guardians destroyed the Oracles and killed the Wolves, but that didn't prevent Skolas from outfitting his army with Vex technology.

The Queen contacted the Guardian and requested that Skolas be taken alive, which made the task of defeating him that much more difficult. The Guardian Fireteam set down near the Citadel, a massive Vex fortress on Venus. Skolas attempted to use the technology he stole from the Vault of Glass to pull the entire House of Wolves through time. However, the Guardians found and defeated Skolas before he could succeed.

Weakened, but alive, Skolas was surrounded, then taken by a Vestian ship. Queen Mara Sov contacted you directly to congratulate your accomplishment personally.