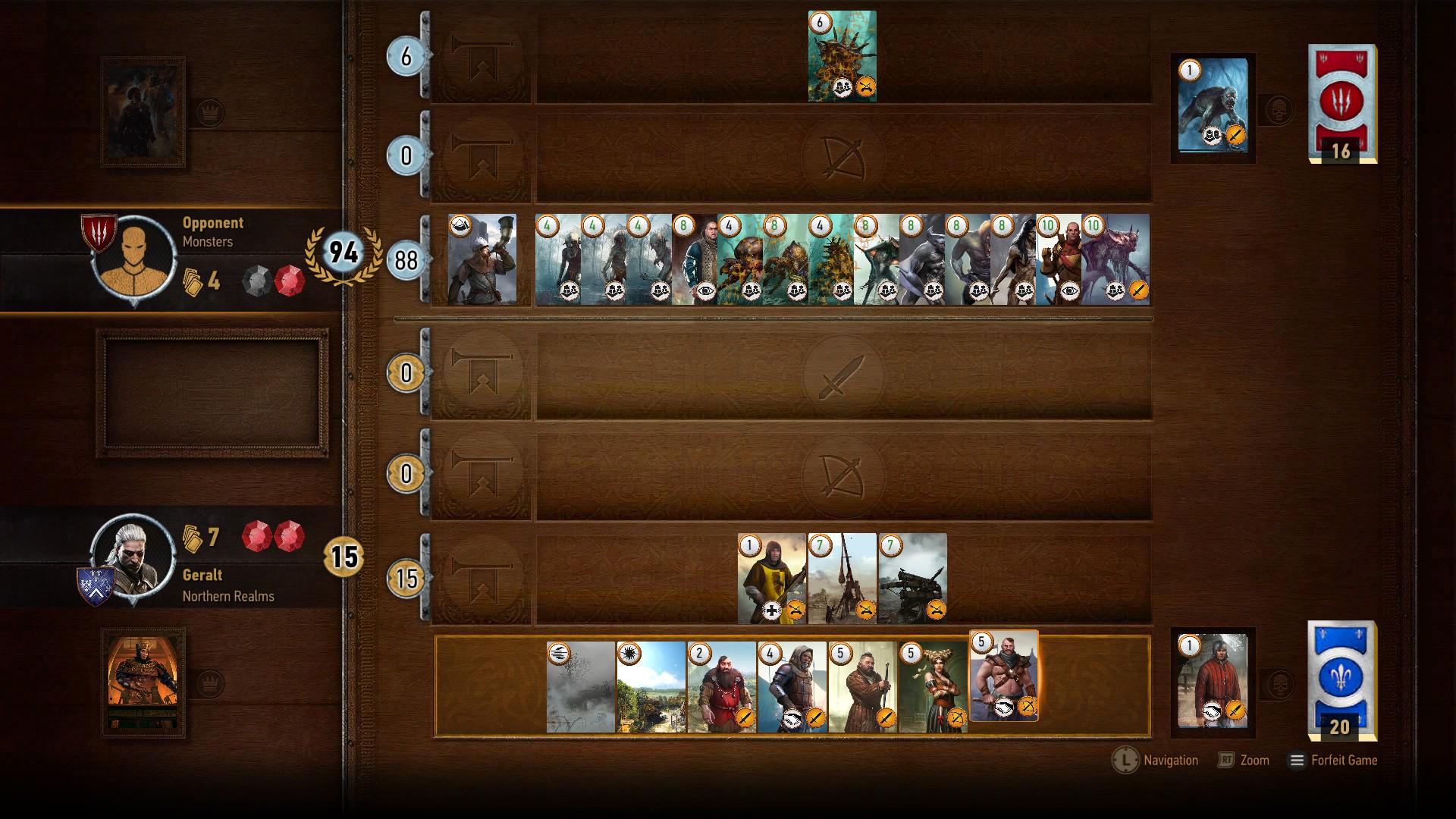 How to Become a Better Gwent Player

Gwent is a card-based game featured within The Witcher 3: The Wild Hunt. It tasks two people against each other, in an attempt to win the match by overpowering the other player. There are four possible deck types currently available, and you’ll need to be aware of each one as you will face off against various opponents with various deck types.

As I mentioned above, there are four deck types featured in Gwent, and each one features a special bonus to that particular deck.

This deck allows players to receive one additional card every time they win a round.

If the round ends in a draw, the owner of this deck will automatically win the round.

This deck type will allow the user to choose who begins the round, thus removing the need for a coin toss.

Each new round that is players, the owner of this deck will be allowed to keep one random Unit Card on their side of the board.

Know When to Walk Away

Gwent isn’t just a game of chance. Like many card games there is an extreme amount of RNG featured in the game’s make-up. However, it is up to you, the player, to figure out what moves you should make. Sometimes you just won’t be able to win, other times you’ll smoke your opponents without losing a single power crystal. No matter the outcome it’s always good to know when you should Pass and finish out a round. If you find yourself struggling to get the hang of Gwent, walk away, and come back to it later. There’s plenty to do in the world of The Witcher 3 without you spending your time cooped up in a tavern playing cards with a bunch of drunkards.

The next step in taking on the best Gwent players in the Northern Realms, is to have a good starter deck. This can be accomplished several ways, the easiest of which, is to obtain stronger cards. The more strength your deck has, the better your chances of winning are. Trust me, you want your chances of winning to be as high as possible. It’s also important to keep in mind that the card’s Power alone isn’t what determine its strength. There are several cards out there with secret powers which make Hero cards, and cards with 10 Power look small.

Build up Your Combos

Combos have always been a popular way to attack enemies in every game, and Gwent is no different. If you want to stick with the best of the best you’ll need to make sure you’ve got yourself set up for some nice combination hits. Cards with special abilities like Muster can allow you to pull multiple cards with the same name from your deck. This is great for adding more Power to your score, as you can have an almost unlimited amount of cards with the same name.

Morale Boosts are also fantastic for quickly building up your score. Many times these cards will allow you to double the Power of every card within a particular panel of your board. This can easily, and quickly turn your 6 Power Siege card into something worth up to double of that. Pair these Morale Boosts with Unit cards featuring the Medic ability, and you’ve written up the perfect recipe to take your enemy down quickly. Medic cards are useful because they allow you to choose a card from your Discard Pile. This is great for picking your Morale Boost cards back up just so you can drop them back onto the board once more.

Since you only start off with 10 cards, and you don’t get to draw more throughout the match, Unit cards that allow you to dive into your deck are great. These cards, called Spy cards, actually go to your opponent’s side of the field. This means you’ll be upping their Power level, but all in all you’ll get to draw two additional cards from your deck.

A great way to use your Spy cards is to make sure you have a Weather card which effects that particular panel ready to play afterwards. For example, say you play a Spy card that is a Ranged Unit. Then you would want to use a card like Impenetrable Fog to limit the amount of Power that each card in that panel earns. This will affect you as well, so make sure you aren’t relying too much on that Panel before playing it.

If you’ve played any amount of Gwent then chances are you’ve come across this card before. Scorch is a great card, which is extremely useful because it destroys and removes the strongest cards on the board. This is an extremely useful tactic to help clean up the board, remove some of your opponents Power, and just help ensure you win the round.

Playing Scorch too early, or at the wrong moment can be utterly catastrophic. Be patient, waiting until your opponent has the most cards with the highest Power. If you happen to lose some Power, don’t stress it, as long as your enemy loses more than you do you should be fine.

Don’t Play Your Cards Just Because You Have Them

The biggest mistake that many players make is to play their cards simply because they have them. You do not have to use your cards just because you drew them. If you happen to end up with a hand containing 4 Weather cards, hold off, and don’t use them. Wait to see what your enemy does, and then if you still have no use for them Pass, or Forfeit the game. It sucks to take a loss, but sometimes you won’t get the best playable hand ever. To make sure you don’t end up with too many Weather cards, or weak Unit cards, preen your deck, and keep it up to date with your strongest cards as often as possible. After all, you never know how many Gwent players you’ll run into in the next town over.

Before we go, there's one more thing I'd like to point out. For the love of everything holy... stop worrying about Round One. It's the first round for a reason, and you can easy make a comeback and finish your opponent off without them even seeing what you have planned. So don't stress if you're the first to lose a Power crystal. There is always room for Round 2 and Round 3.

How to share your island dream - Animal Crossing: New Horizons