It's easy to get lost in Adr1ft, especially when viewing it from a giant movie screen at the AMC Empire 25 in New York City; which is an appropriate setting, given that the game immediately brings the movie Gravity to mind.

You're an astronaut who awakens from a blackout, amid the remains of a destroyed space station, with no memory of what just happened. The primary goal is to make your way through the wreckage and to survive as you repair the station's critical systems and prepare the escape vessel for a return trip to Earth. Along the way, you'll find background information on your fellow crewmates and some clues as to what may have happened. Here's the big catch: Your suit has been damaged, and is steadily leaking oxygen.

It's a space survival game with no monsters, violent robots, or other stalker. It's just you, your leaky suit, and an looming sense of doom. 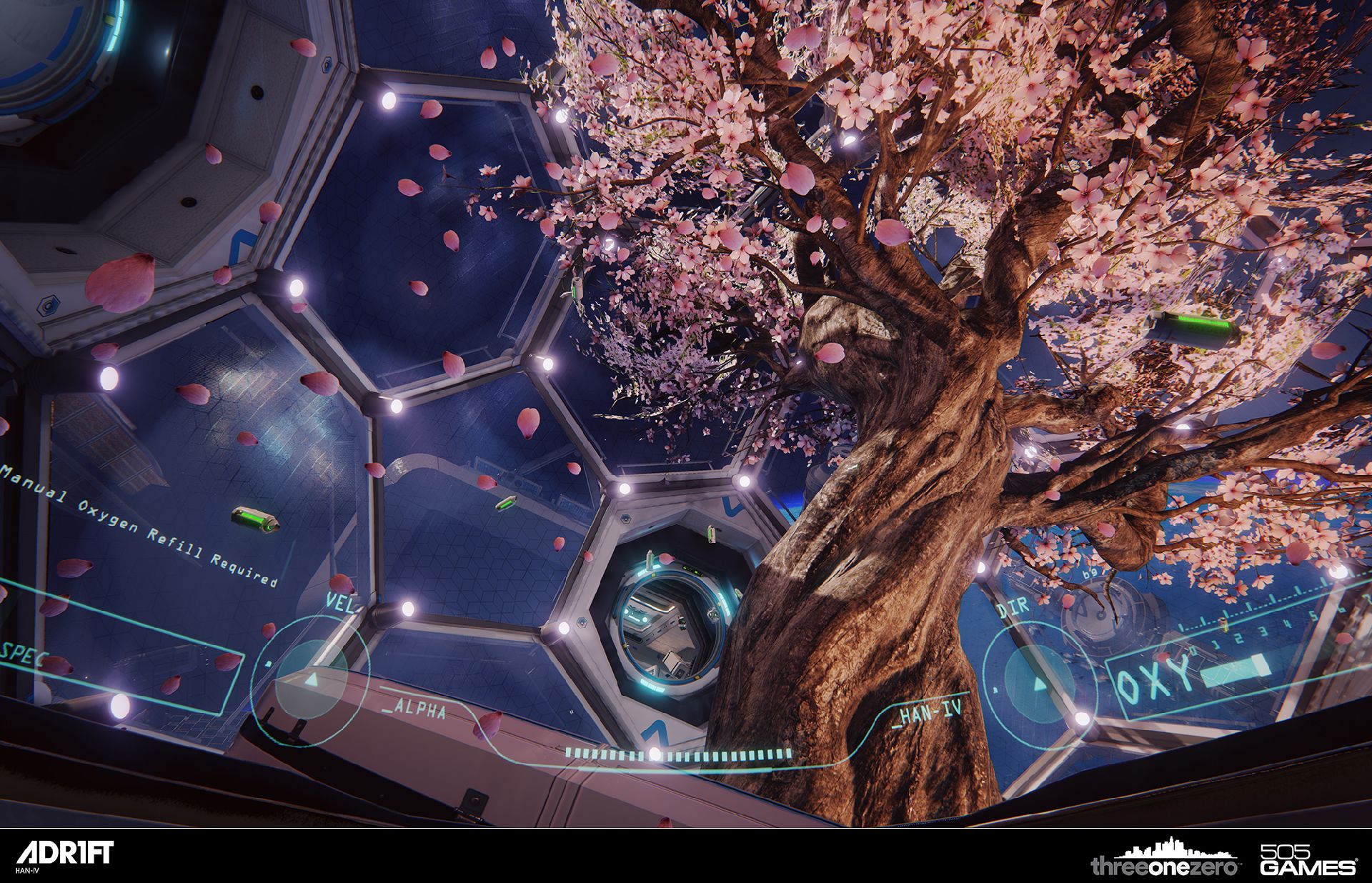 Adr1ft features a sprawling space station, decorated with a lot of plant life. It looks like the plants are either there for oxygen production, or they're part of whatever research the station was conducting. Either way, there are a lot of them, including a huge tree in a glass paneled room absorbing sunlight. Leaves and other loose debris can be found floating around the white rooms and corridors. Despite the station's size, the game is being designed to include about four hours worth of gameplay.

Much of the game involves floating around in zero gravity and catching useful objects, like small oxygen canisters. Adr1ft pretty much bases everything on oxygen. You need it to stay alive, and you need it to propel yourself. This space station does not come equipped with grab handles, so you have to be pretty deliberate with your movements, lest you run out of air. Repair stations can be found, but each one only fixes your suit a little bit. Eventually, you should find enough repair stations so that the oxygen leak becomes less of an issue. 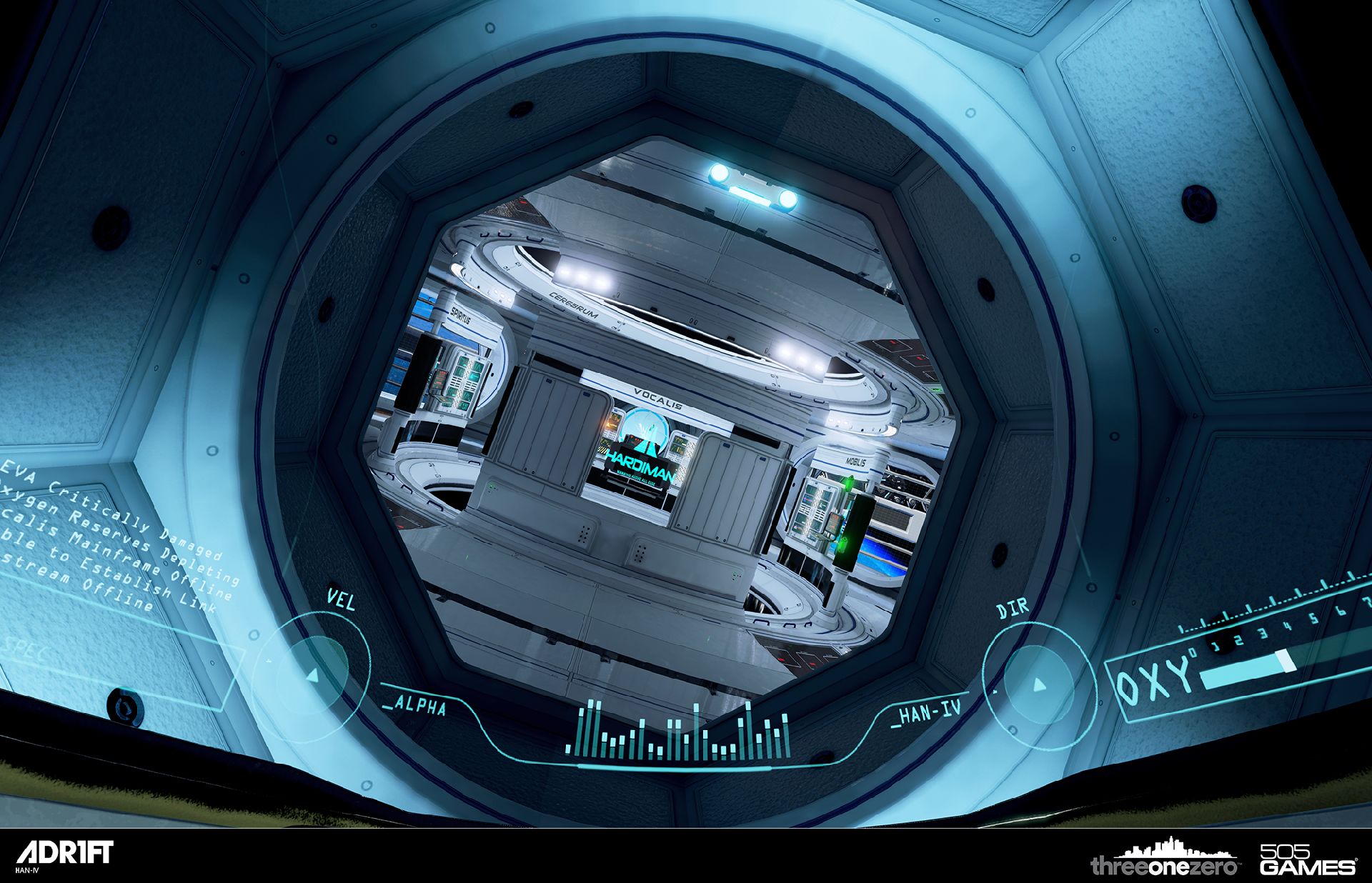 Even though it's a race to survive, Adr1ft has a fairly even pace. The main sound is the astronaut's steady breathing, which turns into choking if you run low on oxygen. It got to the point where I practically felt myself hyperventilating from listening to all the inhaling and exhaling. Between picking up small oxygen canisters and using repair stations to patch your suit, you'll find voice logs left behind by your deceased crewmates, which slowly unravels the story. Many of the logs discuss their personal lives, but they also provide clues as to who you are and what might have happened to the station.

It should be noted that despite the environment's high tech look and the unavoidable association with the movie Gravity, Adr1ft does not base itself in real-world science or design. The space station looks like it might have had artificial gravity before it was wrecked, because there are no grab handles on the walls nor are loose objects like crates tied down with straps or Velcro. Players aren't bound by real-world physics, so throwing an air canister in one direction will not cause you to float in the other, as dictated by Newton's Second Law of Motion (every action has and equal and opposite reaction).

Designer Adam Orth explains that the point of the game is to be immersed in the world and explore the growing narrative. He doesn't want the real world to get in the way of a good experience. In fact, during early testing, the developers discovered that the game was less fun when it was more like a simulator. 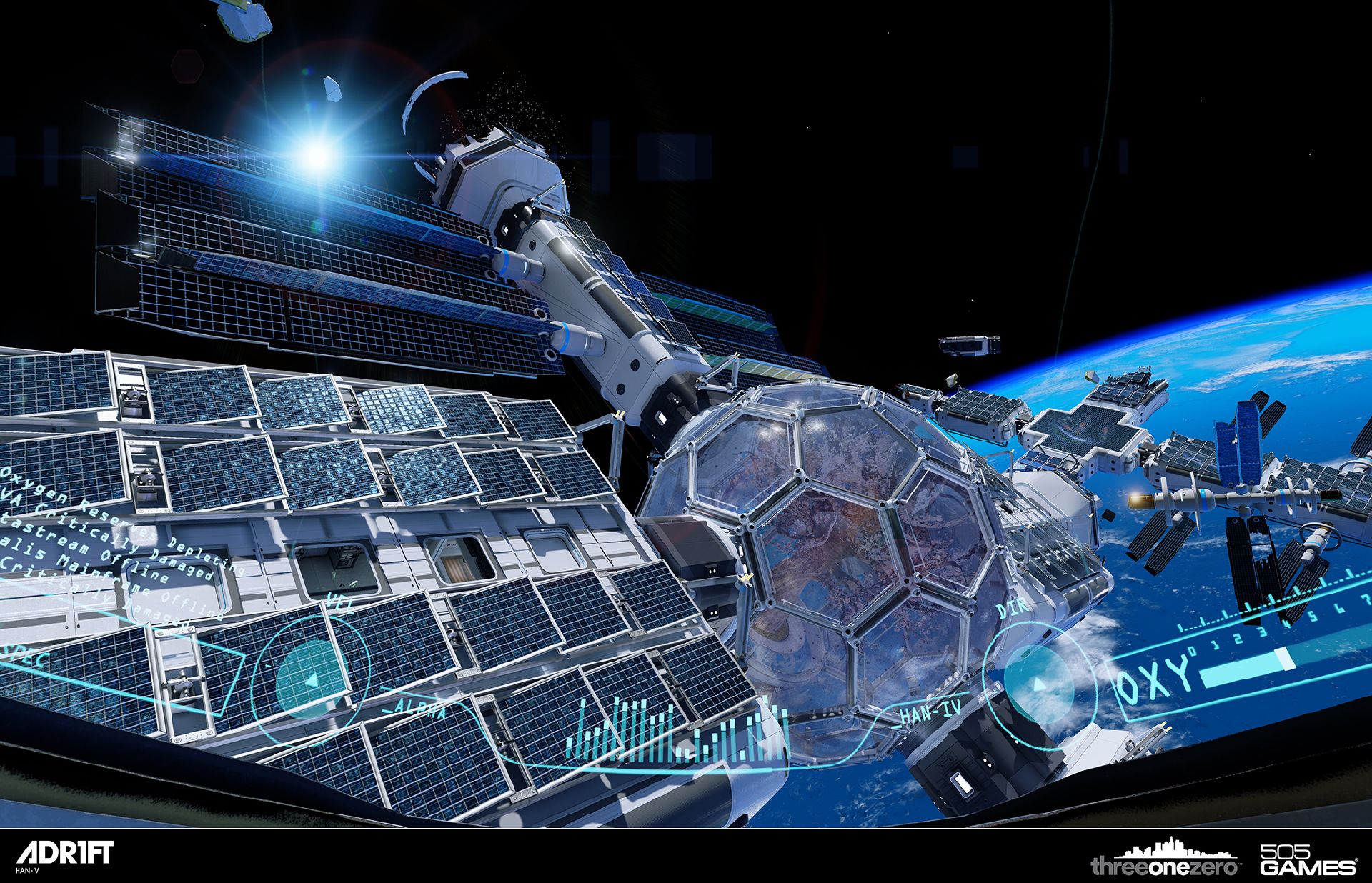 Where the Adr1ft experience might really shine is in virtual reality. The game will support Oculus, Project Morpheus on the PS4, and the HTC Vive for those that want to take Adr1ft to an all new level. In trying out an Adr1ft sandbox demo on the Oculus, I was impressed with the game's rich detail as I floated up to each component and examined them up close. Tilting my head downward to check my displays, like the oxygen levels on the bottom right, took some getting used to. I wouldn't be surprised if a lot of players end up forgetting about the HUD when playing Adr1ft on a VR headset. Luckily, players can always keep an ear out for the sound of the character beginning to suffocate. Hopefully, the final game will have a more pronounced audible alert, like a beep or alarm, once O2 levels go into the red.

Adr1ft looks like it might blur the lines between an experiential and objective based game. Players might move frantically during the first phase of the game, but things could calm down significantly as the suit is repaired and the station's critical systems come online. Movement through the rooms and corridors is relatively slow, even when you're desperately keeping an eye out for air canisters. Eventually, the game must make it possible for players to sit back, float around, and take in the vastness of space.

We'll find out soon enough. Adr1ft releases this summer for the PC, PS4 and Xbox One.