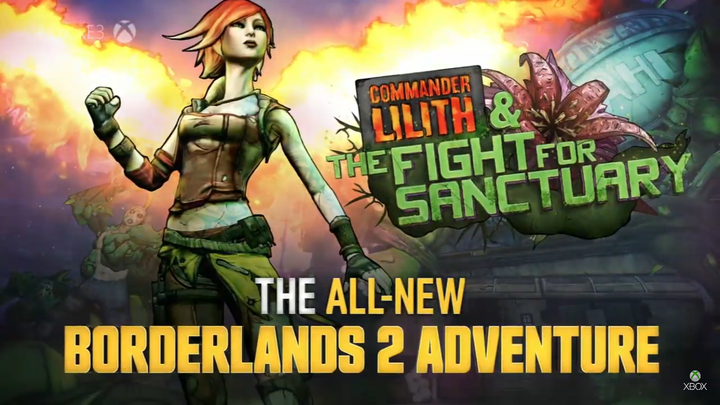 Xbox's E3 2019 conference was home to the reveal of a brand new Borderlands 2 story DLC. This expansion, titled "Commander Lillith and the Fight for Sanctuary" will prepare players for Borderlands 3 with a new mission and storyline. The specifics of the story expansion weren't given, but it's been confirmed that it will lead right into all of the madness when Borderlands 3 hits stores on September 13. The DLC will be available for free so long as you own Borderlands 2 or Borderlands 2: The Handsome Collection before July 8, 2019.

According to the official Steam page:

Return to the award-winning shooter-looter for an all-new adventure that sets the stage for the upcoming Borderlands 3. Sanctuary is under siege, the Vault Map has been stolen, and a toxic gas is poisoning Pandora. Battle new bosses, explore new areas, collect new loot (including an entirely new tier beyond Legendary), and join up with Lilith and the Crimson Raiders to take on a deranged villain hell-bent on ruling the planet.

The new DLC will include a massive level cap boost, allowing players to hit up to level 80, with new users getting an automatic boost up to level 30. You will need to own a copy Borderlands 2 or Borderlands 2: The Handsome Collection to play it, so make sure you pick up one or the other before Borderlands 3 hits latest this year. It looks like players will continue with whatever character they played through the Borderlands 2 campaign with, and you can dive into the new experience right now.

The reveal of Commander Lillith & the Fight for Sanctuary was just one of many announcements made during Xbox's E3 live stream today. Keep an eye on our E3 2019 hub for the latest breaking news from the show.