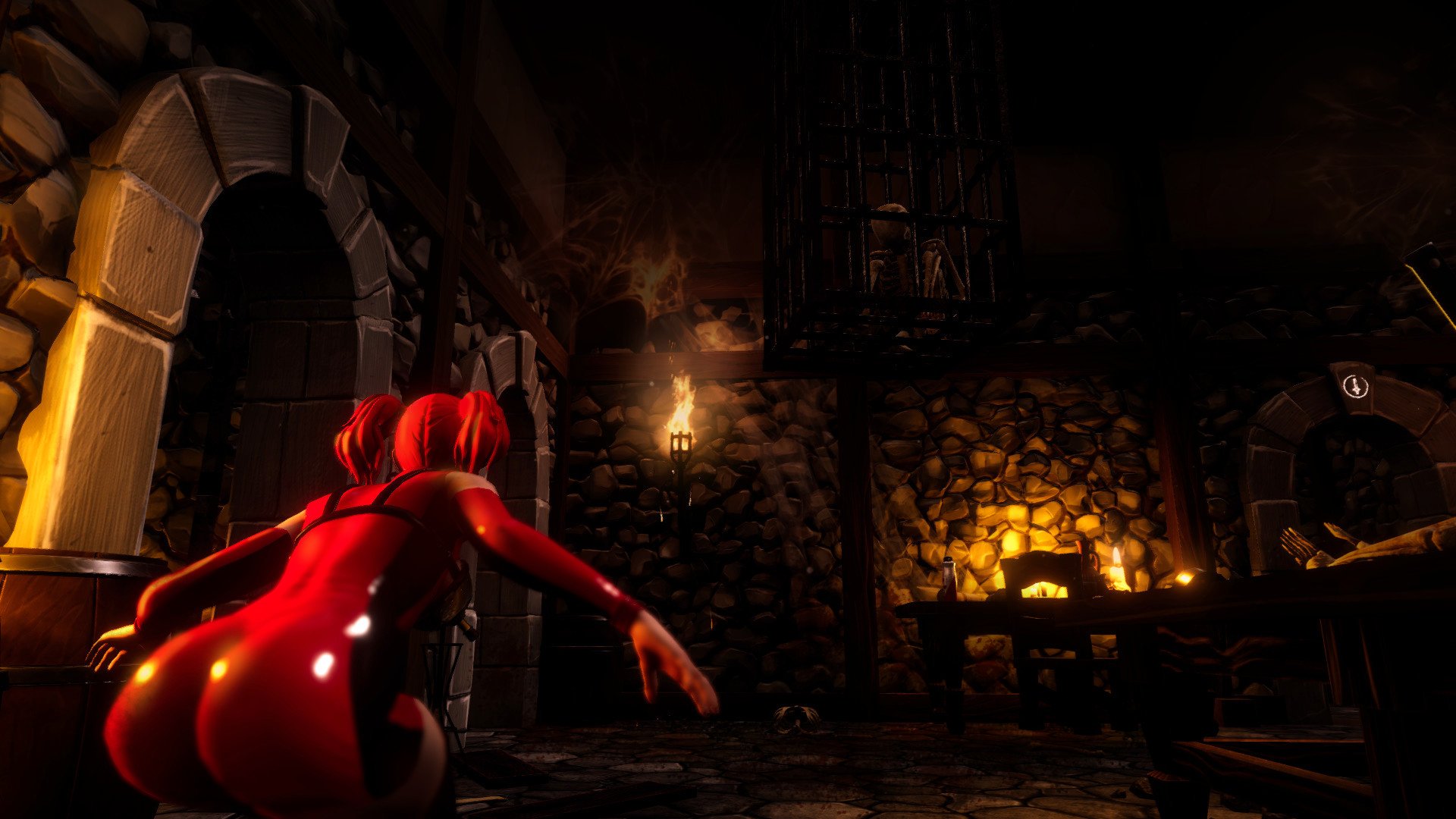 Ever wondered what a lewd dungeon crawler might be like if the "foreign guys who have been living in the United States almost long enough to sound American" from Family Guy made it? Wonder no more – you can find out right now with Boobs Saga.

There's no saga here to be found, unfortunately, so if you're thinking there's some grand epic here that unfolds surrounding breasts, you'll be disappointed. Instead, you'll find a buggy, awkward mishmash of over-the-top explicit content, terrible English, and bloody tampons.

In spite of its myriad issues, frankly, it's hilarious. I knew going into Boobs Saga that it would have me laughing so hard tears would stream down my face. But I was hoping for a legitimately good adult game that just happened to feature fun and ridiculous character customization, and it just didn't deliver in that respect. Boobs Saga is, in a word, deflating as an adult game and action title.

Boobs Saga is marketed as a satirical 3D action game that follows your customizable lead character: a "young woman with some tasty curves." That only means one thing, says the developers: You're a perfect sacrifice to the Boobs King! Your goal is to avoid the various traps set out for you, destroy monsters, dance, and solve puzzles. But most importantly, you must "save your boobs." That's the official PR spiel, however.

Actually, the goal is to pray at all of the statues found around the map so that a demon will come have sex with you. You're going to have sex with a demon either way, however, because as soon as you get a game over, a demon is giving it to you doggy-style anyway. As the story goes, the Boobs King is trying to steal those sweater puppies. So he sends out enormous monsters made out of (canonical) excrement to stop you. That's about the size of it. These tidbits are meted out in a weird, sarcastic manner by the in-game guide Pisidon as well as the Boobs King himself, though it's all completely throwaway.

When you start up the game, you'll be prompted to create your own "Boobs Girl." First you should select whether you want a human or furry character, because you can select one of either. You can choose from a variety of different headgear, hairstyles, skin colors and races, clothing ("suits"), shoes, and body styles. This is where the uproariously bad translation examples begin. Instead of "shoes" or "footwear" you get "Foot Type" and instead of anything beginning to remotely resemble "weight, breast size, etc." you get "Boobs Size," "Ass Size," and "Fatty Size." I'm dying laughing as I write this – I mean, Jesus Christ, "Fatty Size." At least it's straightforward.

The sliders for each aspect of your character let you make cartoonishly large boobs (the only kind you need, in my opinion), a luscious derriere if you so choose that Kim K. would be proud of, and overall weight distribution. If you want a thinner girl, that's perfectly doable too. There's a decent amount of customization, in fact, despite an initially limited amount of costumes. But the accessories are great – you can put a paper bag over your character's head to add to the absurdity, so I did. I named my first bag-headed character Tinky.

You can name your character using the "Boobs Passport" on the right side of the screen, where you select your name, age, sexual orientation, and whether she's a virgin or not. Bizarrely, choosing some sexualities beyond heterosexuality gives you extra lives. I couldn't for the life of me figure out what being a virgin had to do in terms of enhancing gameplay. I guess if you like to role-play a promiscuous furry bag-headed dungeon crawler, this is an important box to tick, but otherwise it seemed like just another extraneous option. Oh, and while you can only choose to make a male character at the onset, you can choose to add "other" customizations once you've spawned your character, if you know what I mean.

Be sure to use protection

Once your "Boobs Girl" is ready to go, you're spawned into a world where you can decide immediately if you want to play with the uncensored patch off or on. I chose to play with it on, obviously, but for the purposes of this review, I had to make sure everything was censored. As soon as you spawn in, you get an eyeful of masturbating dungeon-dwellers, full-frontal vaginas, buttholes, and just about anything you can think of. It's pretty refreshing to see a game with such a laissez-faire attitude toward nudity and sexuality, so I appreciated the abundance of X-rated content immensely.

If you thought you'd just bounce into this game and look at boobs, however, you're in for a rude awakening. If you play the uncensored game, you're going to see things you may not have planned on seeing. Even with the censorship, you're still going to see it. So if you're not ready for full-on male and female nudity, my suggestion is not to buy it. If you can handle it, and this is what you're looking for, then read on, dear fellow deviant.

As you make your way through the dungeon, you'll see demons having sex with one another, walk through enormous orifices ("vagina dimension portals"), succumb to cervical sponge mines splattered in an "unknown" white substance, and sit on bloody tampons to regain health. I'm not making this up. I laughed until I thought I'd asphyxiate at the absurdity and surrealism of it all.

Of course, there's an actual game here beneath all the side-splitting sexual content. You still have to fight your way through the dungeon to pray at those altars, remember? But to do that, you've got to get past all the enemy gnomes first, many of whom have dildos for noses and walk around on predetermined paths. There's a variety of different weapons to choose from, including melee weapons, a ranged one-use fireball scroll, mines that look suspiciously like cervical sponges, mines, bottles you can throw to stun enemies, and boob-mounted guns and shields. It's fun to pretend you're in Lady Gaga's "Alejandro" video and shoot enemies with one of the only truly functional weapons in the game, but the novelty is short-lived, because combat is well and truly broken. So get used to dying over and over, even when you're armed to the teeth. Stealthing it out is really the way to go, using mines and planning to ambush the gnomes since they never stray from their posted locations.

Before the inevitable comparisons to "Souls-like combat" (which isn't good at all here), consider that those games only work because you aren't constantly fighting the game at every turn nor doing your best to avoid traps. You only have a few ways to avoid enemies and traps – blocking and rolling. Neither can be performed in quick succession, so if you roll out of the way of an enemy or a trap, guess what? You can't do it again until your character reaches a standing position again. This calls for laser-precise timing that you just don't have when the enemies assault you or you clip through another trap that falls from the ceiling. It's not difficult because it's cleverly designed in this case. It's hard because it just isn't made well.

One aspect that annoyed me more than the awful combat controls (and navigation in general) was listening to the "guide" Pisidon and the terrible voice clips that went along with them. I'm not sure if the developer himself decided to take on voice work here, but he should consider sticking to coding in the future if that's the case. If you were actually playing this game for any sexual gratification (and that's cool if you are) his obnoxious utterances will grate on your nerves quicker than you can say "premature ejaculation."

One thing I will praise Boobs Saga for, however, is its high quality visuals and details when it comes to characters and enemies. The environments are pretty fantastic as well for a cheap Early Access game. It looks like a much more expensive game from a larger studio, and it ran far better than a game I also reviewed at the same time on Nintendo Switch, which is somewhat alarming for the developers of the other game.

A hot load (of garbage)

Boobs Saga is a confusing mess of poor controls, bad voice acting, terrible combat, and awful English text and dialogue. It's a shame, because it seems otherwise it could shape up to be a serviceable lewd adventure. To be fair, it's still in Early Access, but there are things I don't see being improved upon in the near future. It's more of a curiosity that's fun to boot up and gawk at, or show your friends that it's possible to purchase a game that doesn't shy away from including sex. But it needs to be a good game to triumph in my book, and it's just not. Make a truly adult dungeon crawler with serviceable controls and gameplay, and I'll be back for more. Boobs Saga certainly isn't it right now.

This review is based on a PC download code provided by the publisher. Boobs Saga is available on PC now.

Mortal Shell to get physical release on PC, PS4, & Xbox One in October 2020