This walkthrough will help players earn 100 percent completion and unlock all endings in the Interrogation chapter of Detroit: Become Human. This is one of the first chapters that can be missing from a playthrough depending on the choices made in earlier chapters. This chapter can also have an impact on events that take place after it. 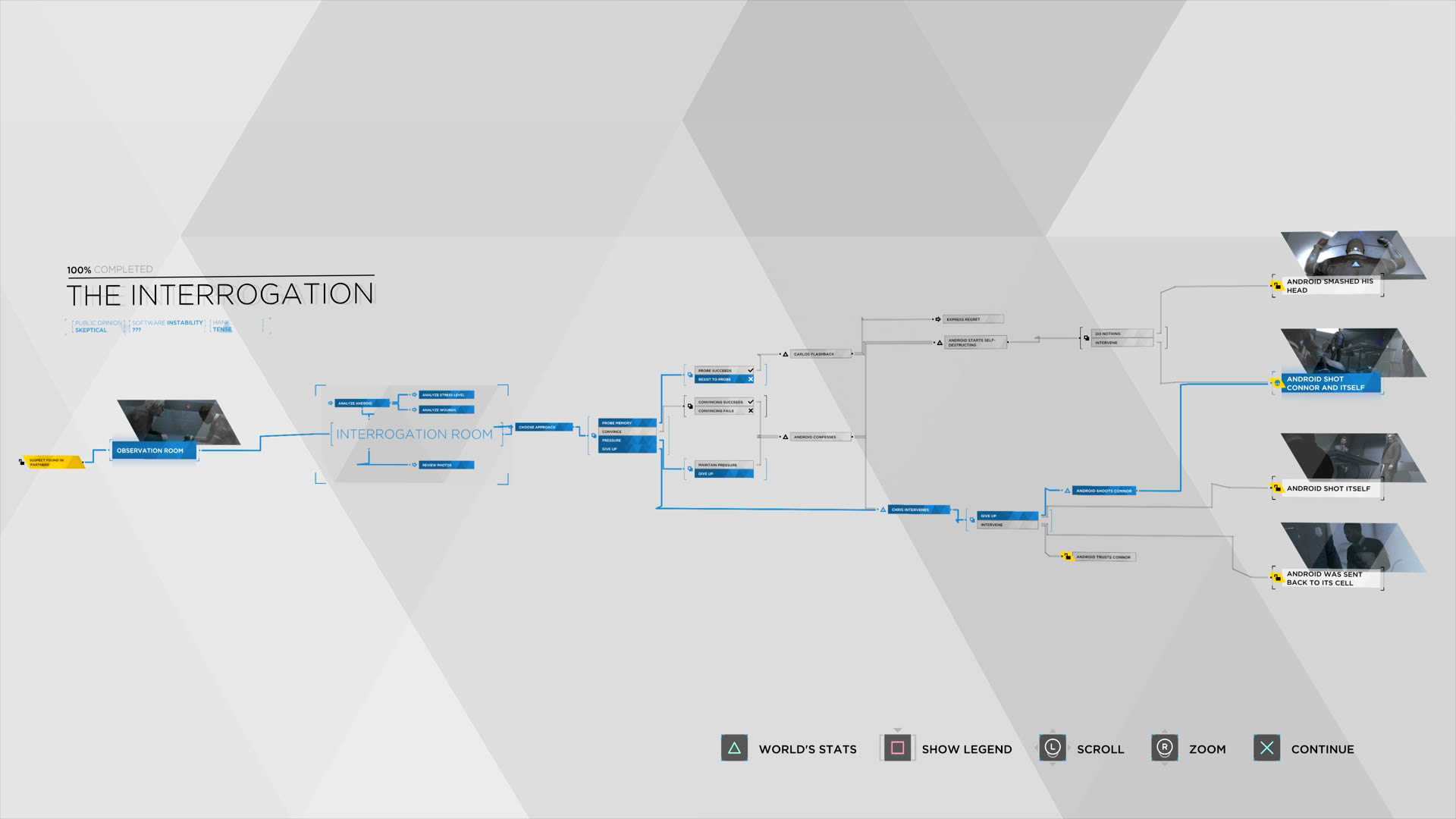 The 100% complete flowchart for The Interrogation.

There are several interlocking branching points in The Interrogation, the likes of which lead to four distinct endings. Of course, the availability of the chapter itself is dependent on whether or not players found the suspect in the chapter Partners. Assuming they did, they'll have a few different directions they can take the suspect's interrogation.

The Interrogation: All Endings

Android Smashed His Head
This ending is only possible if Connor stressed the android out too much, then fails to get the confession. An easy way to get this is to pressure the android repeatedly until its stress level is too high, then probe its memory. Intentionally fail the probe QTE and Connor will give up, letting Chris come into the room. Do nothing and the android will smash its head into the table.

Android Shot Connor and Itself
This ending is obtained by stressing the android out far too much, then failing to get a confession. Try to pressure it until it’s close to the max, then probing its memory. Fail the QTE event related to probing. When Chris comes into the room, don’t intervene. The android will take the gun and shoot Connor and itself.

Android Shot Itself
This ending is possible if the Android’s stress level isn’t high and it doesn’t hate Connor. Apply some pressure but give up. Don’t probe its memory. When Connor fails to get the android to confess, Chris will intervene. Give up again and the android will shoot itself. Try to keep the android’s stress level at optimal or it will most likely shoot Connor as well.

Android was Sent Back to Its Cell
This would be the optimal ending in most runs. The idea here is to get the android’s stress level to about 50 percent (optimal), then convince it to confess. Sometimes a mean approach is necessary (to raise stress), and sometimes an understanding approach is necessary (to stop stress levels getting too high). If Connor can keep stress at an optimal level the android will confess. When Chris enters the room, Connor must intervene so that the android trusts Connor. It will then be sent back to its cell and available in Waiting for Hank. This ending unlocks a branch path in the chapter Last Chance, Connor.