There’s been a lot of talk about the Nemesis system in Shadow of War in the lead up to the game’s release. However, it’s not immediately clear what the Nemesis system is because, in truth, it falls a bit short of what I feel most people are expecting. Don’t get me wrong, it’s still great when you know what it is, but it doesn’t fit inside a neatly defined box. It’s complex and wide open, which can be confusing. 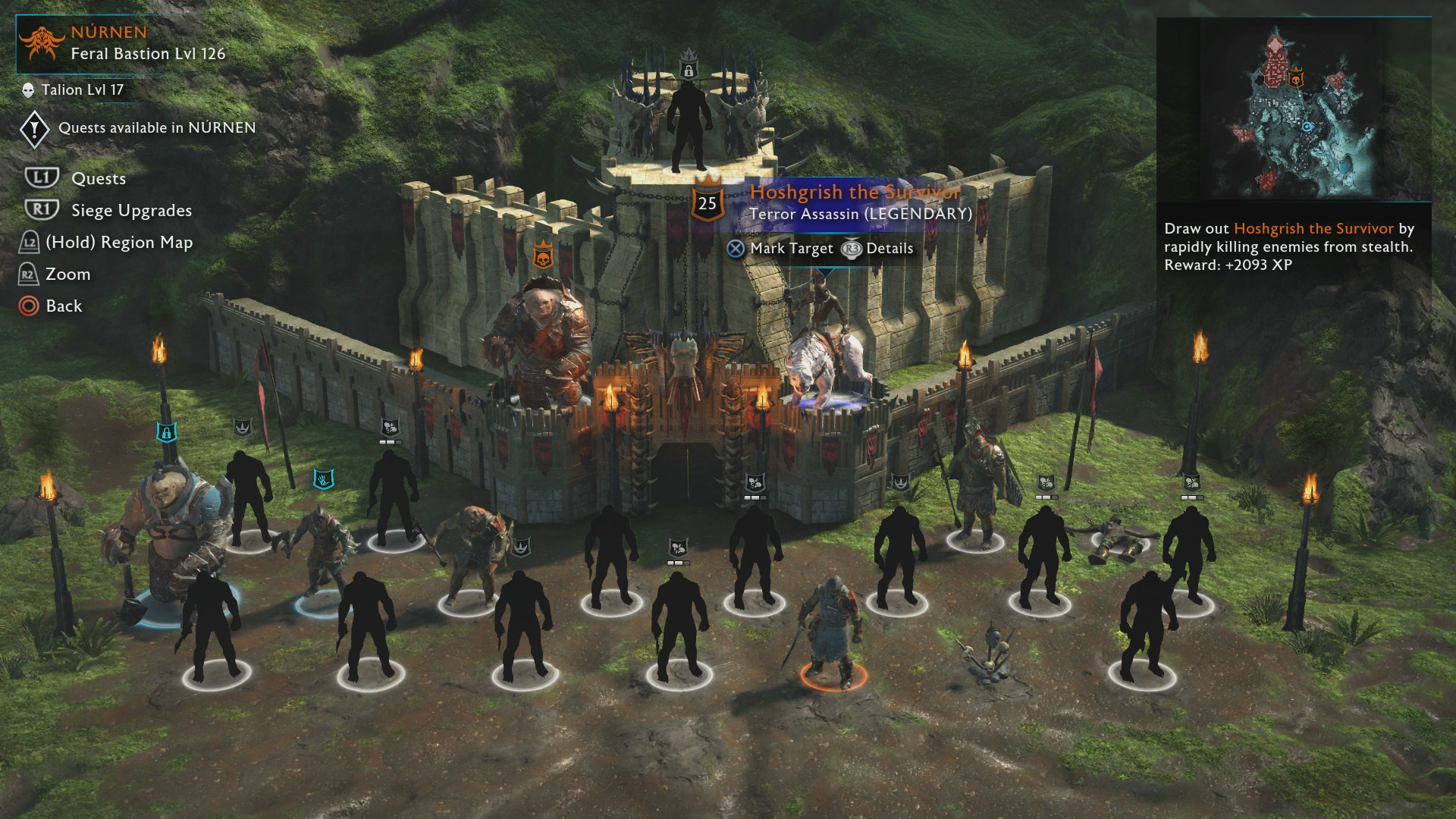 The Nemesis System deals primarily with the game’s Captain’s, Warchiefs, and Overlords. These are some of the most powerful enemies in the game, and they can be viewed when you pause your game and use the Army option. You’ll see a couple rows of Captains lined up. Above them, there are the Warchiefs and, finally, there is the Overlord who controls the Fortress in that region.

What you’ll also notice from this view is that you can gain intel on Captains, Warchiefs, and Overlords by interrogating Worms found throughout the region. This intel is then used to plan your attack, or decide if you want to try to use the Dominate Captain Skill to recruit someone specific into your ranks. For the most part, though, you use intel on a Captain’s Strengths and Weaknesses to plan how you’ll kill them. 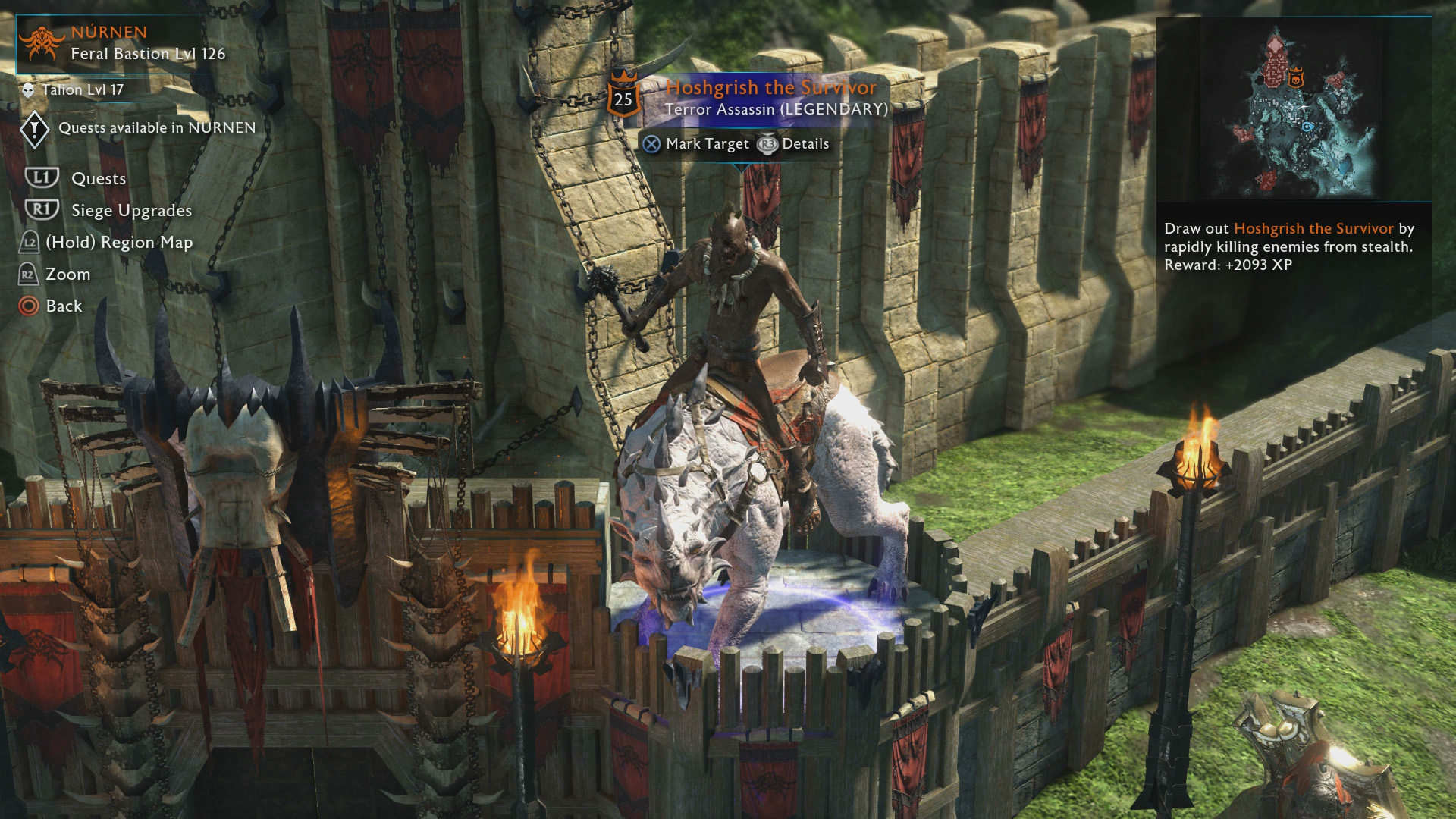 The Nemesis system truly takes flight when you lose a battle with a Captain, or any enemy of any level. You see, as Talion, the Ranger, you are a celebrity in these lands. You’ll hear enemies talk about you as you use stealth around them. If they spot you, they’ll often comment that they’ve found the Ranger. To kill you is a big deal to not only Captains, Warchiefs, and Overlords, but to anyone. If someone lower than a Captain kills you, they will increase in level and receive a promotion to the rank of Captain.

In most cases, when Talion dies, a timed Vendetta mission will show up on your map, tasking you with killing the enemy that just bested you. If you pull this off before the timer expires, you’ll be given even more powerful gear than you might have received in the first place. 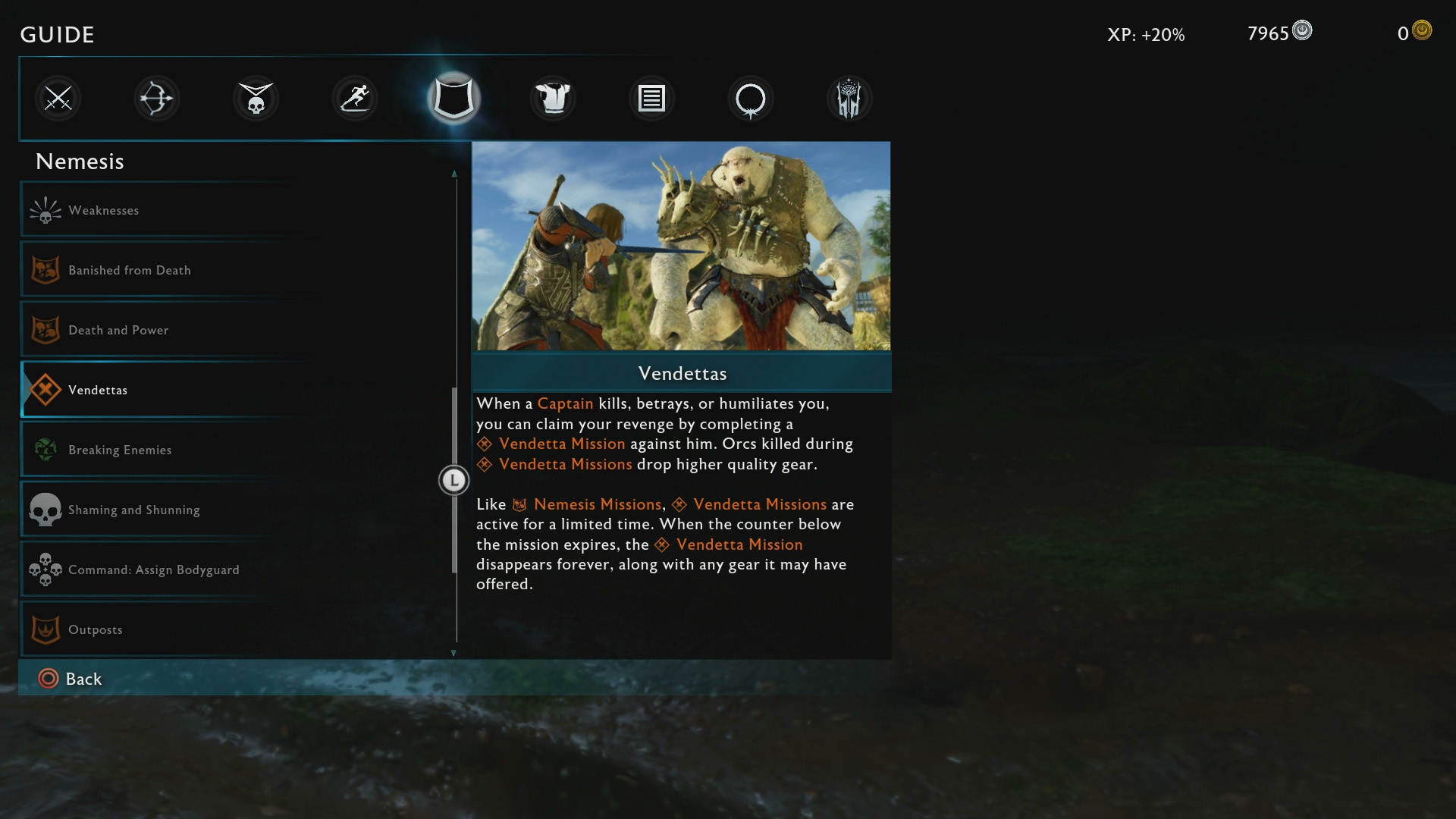 It doesn’t stop there, though. I defeated a Warchief in Nurnen, weakening the Fortress defenses for my upcoming Siege. Then, I spotted someone I thought might fit in well as I built my Army, Hoshgrish the Survivor. He had some level on me, but I knew his Strengths and Weaknesses and planned my attack carefully. However, things went wrong and Hoshgrish defeated me. He was promptly bumped up one more level, and promoted to the vacant Warchief spot in Nurnen. Not only am I butt hurt that Hoshgrish the Survivor defeated me, the loss has set me back considerably. I now have another Warchief I must kill to increase the chances of my upcoming Fortress Siege going well. But rest assured, Hoshgrish is going to die more because I want him to than I need him to, which is exactly the point of the Nemesis system.

There are also the Nemesis missions in the game to consider. These, like the Vendetta missions, are timed, but occur between two AI Captains feuding. Head to the mission start point and you’ll see the two of your foes about to face off. The one that’s victorious is often promoted and will level up, and can fill out any vacancies in the Army menu. You can decide if you want to watch and let them sort it out, intervene and help the one you wish to be victorious, or, killing them both in the chaos and calling it a day. 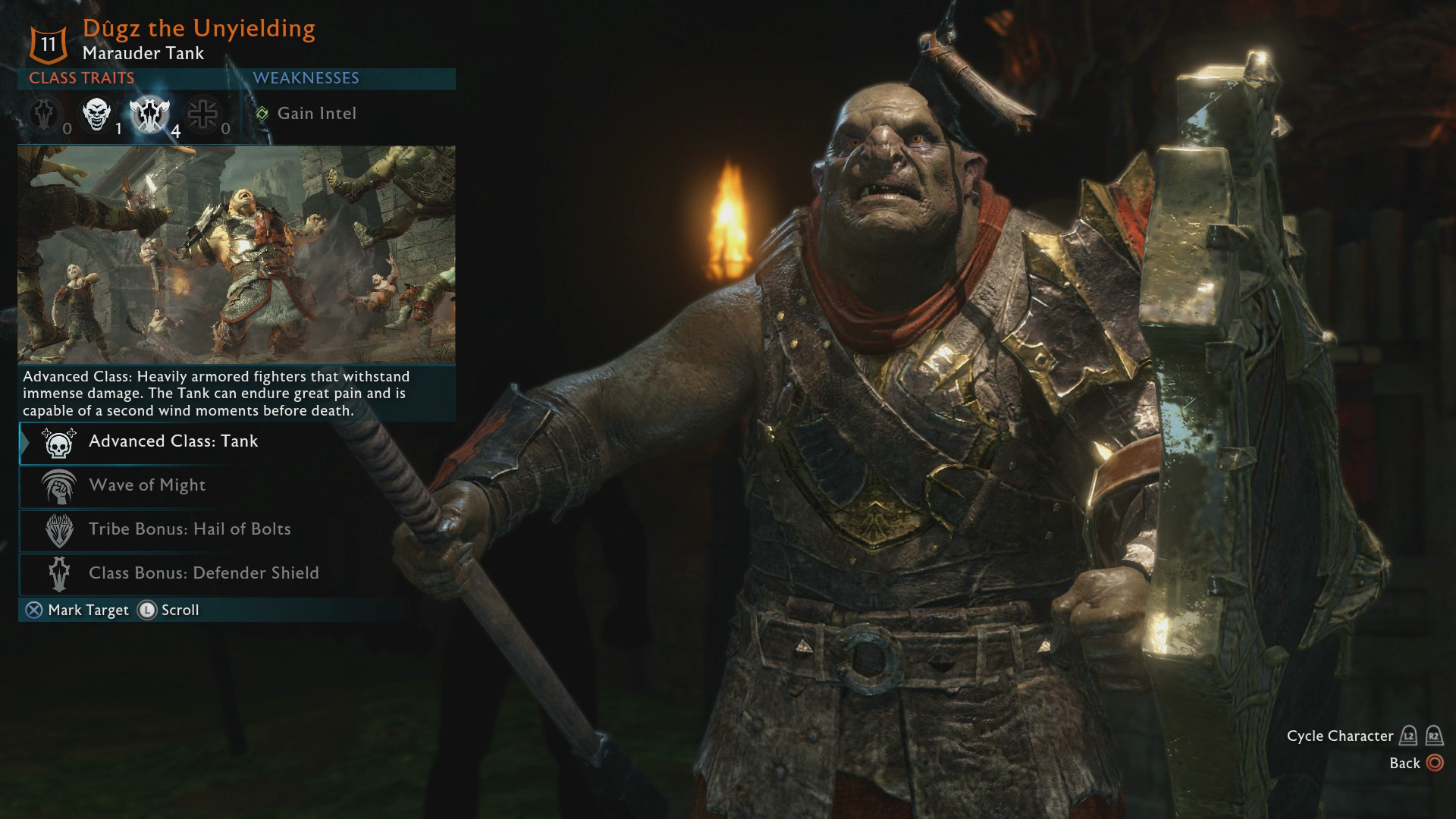 In a nutshell, the Nemesis system is all about understanding the Strengths and Weaknesses of the Captains, Warchiefs and Overlords. Using that information to attack them and, if you fail, seeing them move up the ranks and become more powerful. It’s about you fighting enemies more than once, and having an impact on the power struggle between your enemies. Recruit Captains to fight for you, only to be betrayed by them and ulimately face off in battle. The Nemesis system is about giving your opponents a name and personality and seeing the very real impact that they can have on the game.

For more information beyond the Nemesis system, visit our Shadow of War walkthrough and guide. 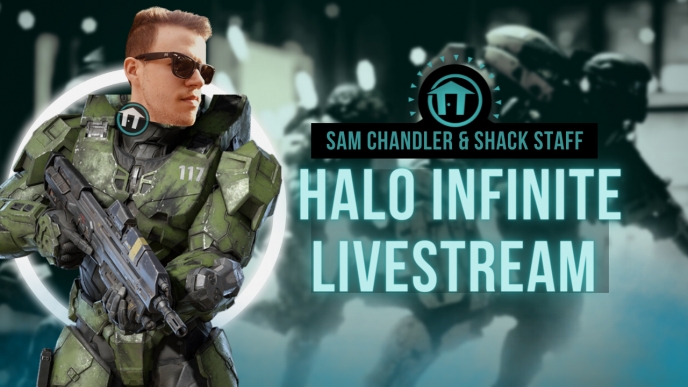 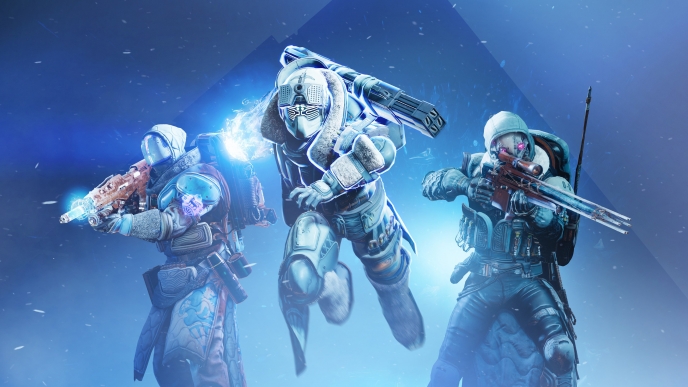